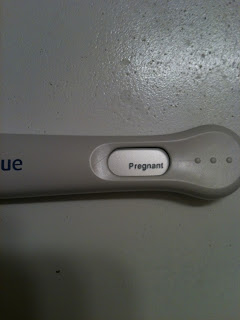 I am a runner and understand my body as most runners do.  Running gets you in tune with your body.  You learn to listen carefully to what it says.  This pace is too fast.  That ping in your knee just isn’t right.  These shoes are too loose.  I have spent 15 years of my life listening to my body and I feel that I have become pretty darn good at it!

The last week in April was when it all started, the struggle with my body and running.  My legs felt heavy, like I was lifting cinder blocks rather than feet.  My thighs burned throughout my runs and I just couldn’t get moving.  At first I wrote it off as a bad day, but then another bad day would follow.  I couldn’t figure out what was “wrong” with me.  Could it be anemia?  No, I was taking prenatal vitamins with iron in them.  This feeling was something I had never experienced and it was weighing heavily on my mind.  When I voiced my concerns to my husband, Ty, he jokingly replied “You must be pregnant.”  I chuckled along with him and blew off the comment.  But then another bad run would follow, and another…

May 4th I went out to run quarter-mile repeats which I’d been doing weekly for almost 2 months.  The bad day syndrome had gotten worse.  I felt like I was running in place and I almost didn’t finish my workout.  I knew something was really off.  What could it be?  My husband’s previous comment was still hanging in the back of my mind.  As I drove home I replayed my dream from the night before in my mind.  My dream-self waddled around very pregnant and then gave birth to a baby boy.  Now, it’s not that this was the first dream I’d had where I was pregnant.  I’ve had those kinds of dreams before, but this one was different.  I actually delivered a baby.  None of my previous pregnancy dreams ended with a baby.  It could be nothing, it could be something.  I’m not one to believe in dreams relaying messages, but I do believe sometimes we know things subconsciously before we acknowledge them consciously.

When I got home from my run I texted my friend Erin to tell her about my dream.  She responded with, are you trying to tell me you’re pregnant?  Up until that point my answer would have been a resounding no.  But in that moment I felt like maybe I was.  Surely it hadn’t been long enough.  When did I take my last pill?

Ty and I had plans to go to dinner with some friends.  The restaurant we were going to carries a really delicious raspberry beer that I love.  At this point I was starting to have an inward struggle.  Maybe I shouldn’t get a beer, but surely I’m not pregnant.  I went in the restroom to take a shower.  As I got a new razor blade out of the cabinet I saw the box of pregnancy tests we had bought back in April.  As I looked at them I thought: maybe I should take one, it would make me feel better about getting a beer to know for sure I’m not pregnant.  So I did.  I looked down at the test, now comes the waiting game.

I walked out into the hall and Ty was standing there.  He knew something was up because I wasn’t taking a shower.  He asked what I was up to and I told him I had peed on a stick.  It took a moment for the news to register and when it did we went into the bathroom to see the result together.  We looked down and saw one dark line and a second not as dark line.  I looked at Ty who had a blank look on his face.  I somewhat screeched, “Do you think this is real?!!?” at him as I stared back down at the test.  I felt excitement bubbling up inside me and attempted to suppress it.  What if that’s not really a second line?  What if I’m not really pregnant?  So I pulled out a second test.  That test also showed two lines, but this time the second line was a bit fainter.

For some reason I wanted to see the words pregnant.  So on our way to dinner we stopped at the store and bought a package of digital pregnancy tests.  When we returned from dinner I took one of the digital tests.  Seeing the word pregnant on the read out was the most amazing feeling!  So far I had taken 3 positive pregnancy tests, it had to be real, right?  I kept the digital test on the bathroom counter and would occasionally sneak in to read the word pregnant.  Each time I would get the best feeling of excitement followed by some nervous butterflies.  By the end of the weekend I had taken 5 pregnancy tests, all with the same conclusion, pregnant.  We couldn’t wait to share the news with our families!

*FYI: I was not following the directions on the pregnancy test, you shouldn't take 2 in a row and it is advised to take tests first thing in the morning when hormones in your urine are highly concentrated.*
Posted by Liz Runningmomma at 10:01 AM