This weekend Ty had his Fantasy Football draft in my hometown so we came to visit for the weekend.  This league is serious business with a $20 buy in and the winner taking a pot of about $300 which Ty won in 2012.  He was in charge of food for draft day and brought the smoker to make pulled pork and bologne for the guys.  Everyone meets up at one person's house with their computers and it's an online draft.  The first year Ty did it, it wasn't online yet and they used a white board with Expo markers.  It seems to be much easier for the commissioner now that it's online.

This weekend also happened to be the Little Balkans Day Festival.  The festival celebrates the history and ethnic diversity of the region.  The area was deemed the Little Balkans of Kansas due to the large number of the immigrants who traveled from southeastern Europe, also called the Balkan region of Europe, to Kansas to work in coal mines back in the late 1800's and early 1900's.  One of the biggest events of the weekend is the sidewalk sale with art booths that extend along the main street in town.  We took Carter with us and strolled down the street.
At the end of the sidewalk sale they had inflatables and rides for kids.  Carter initially got distracted by a bubble machine, dancing and popping bubbles.  When he saw the inflatables he was desperate to go through them.  My mom picked up a couple of tickets so he could try them out.  He went in the one that looked most age appropriate and excitedly ran down the first hallway and through a tunnel before getting to a wall he had to climb and turning around to run back toward the entrance.  I was very proud of him for going in on his own.  At Ty's company picnic he wouldn't go through the inflatables unless I went with him.  He loved bouncing through it this time and went up and down the hallway and through the tunnel for probably a good 10 minutes before he went back to the entrance and climbed out.  We bumped into a friend of mine from high school with her 2 kids.  There was an inflatable caterpillar for kids to climb through.  Her daughter said she'd help Carter so we sent him in behind her.  There were clear plastic windows on the side to watch through and her daughter actually put her hands in Carter's arm pits and lifted him over a wall they had to climb over.  It was so cute!

After all the fun of the inflatables we headed over to a petting zoo area.  Carter loved it and when he saw a zebra he very excitedly pointed and exclaimed, "tiger!"  It must have been the stripes that tricked him up.  He enjoyed filling little shovels they had available with food and feeding the animals.  It's hard to say which animals were his favorite as he seemed to like them all quite a bit.  We made it through all the animals and I looked down at Carter's face.  It was beat read and his hair was matted to his head with sweat.  We were planning to stay in the area to meet up with my friend, Erin, and her son, Hayden, but it was 20 minutes until naptime and I could tell Carter was done.  We headed home for a quick lunch and then it was naptime. 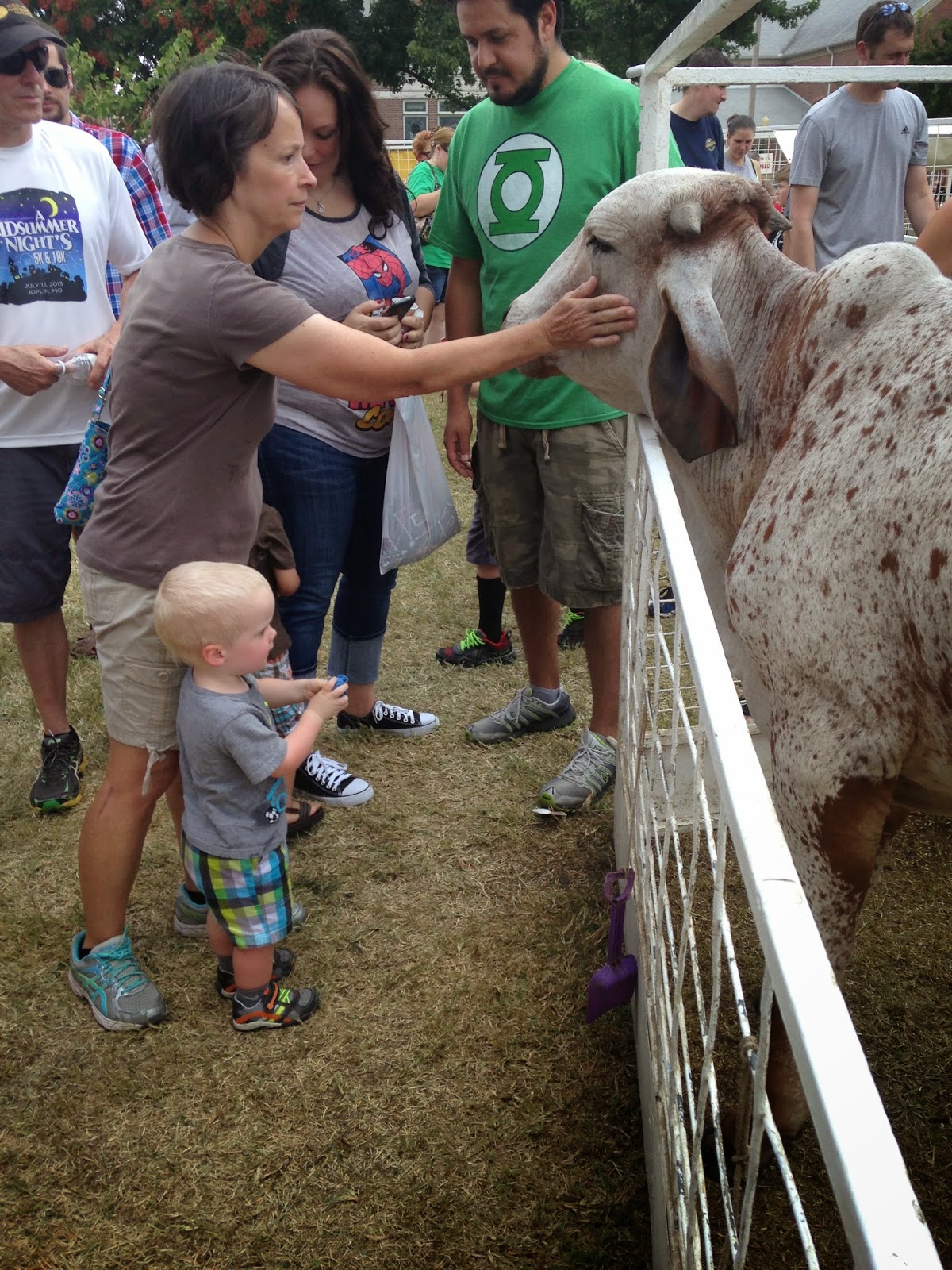 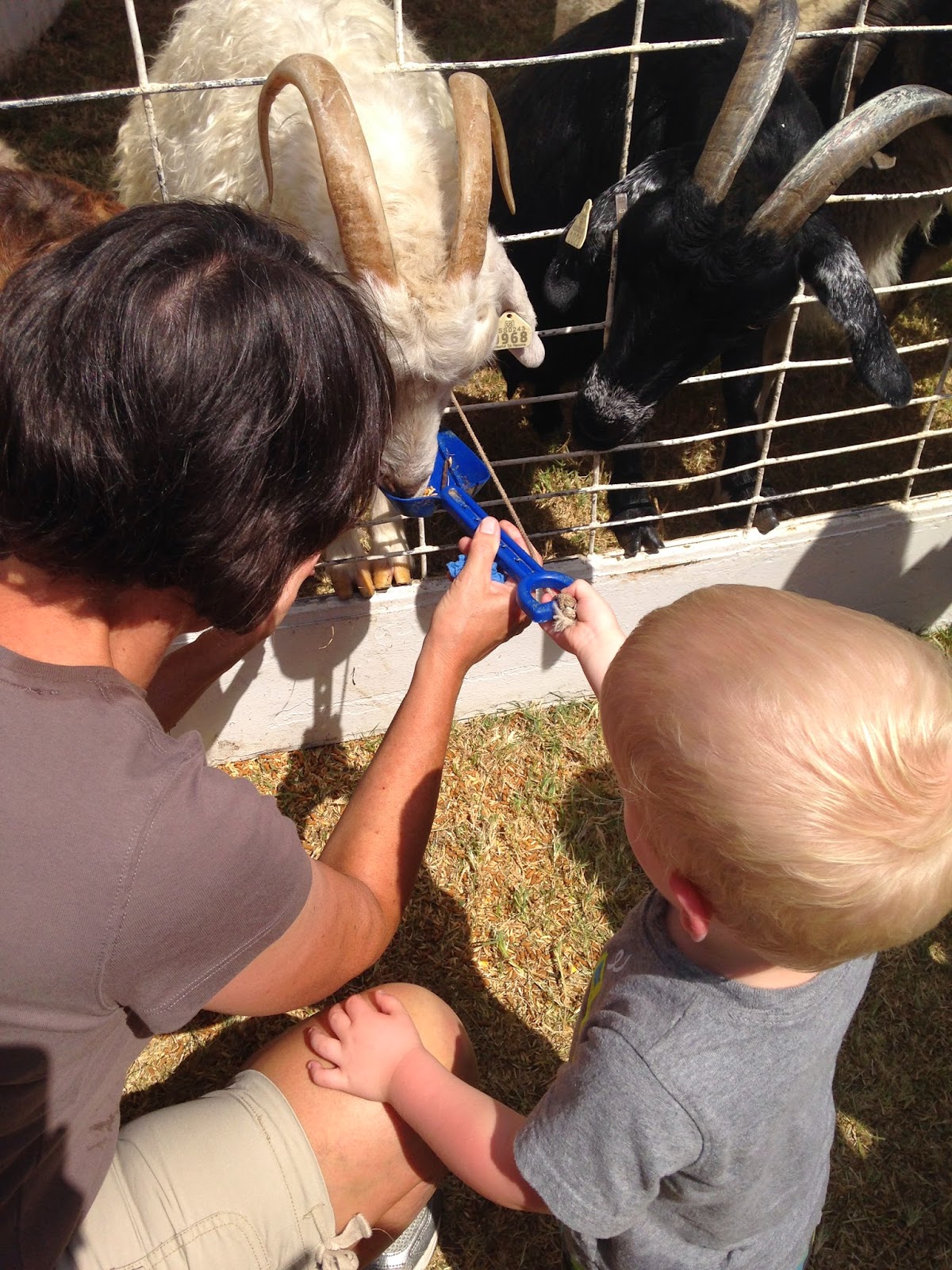 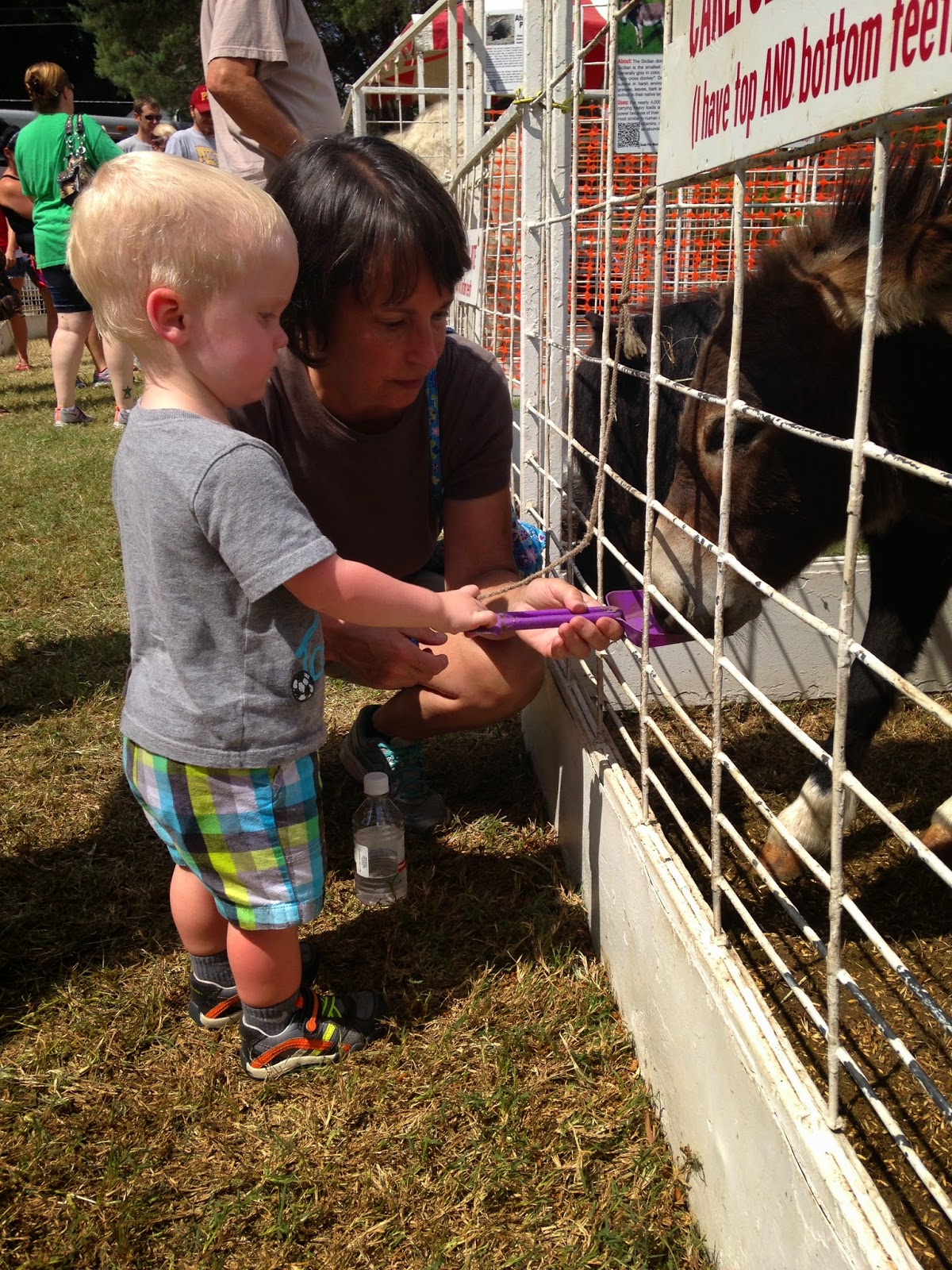 When Carter woke up I texted Erin to invite her over and she came along with Hayden and her parents.  My mom bought Carter a really neat roller coaster toy at Sam's Club and we all knew Hayden would love it.  Carter had ridden it twice earlier in the day and was pretty scared.  After his rides he cried anytime someone tried to put him on it.  When Hayden arrived Carter rushed to the car yelling, "Haydey" which was too precious for words.  Hayden was immediately intrigued by the roller coaster and wanted to push the car down it and walk on the track, but wasn't interested in riding it.  Eventually his grandpa talked him into going down it and he loved it.  Feeling brave after watching Hayden go down, Carter went for another ride.  He didn't seem quite as scared, but he didn't look like he had fun either.

Carter riding the roller coaster earlier in the day:

This visit was the best Hayden and Carter have ever played together and it was the cutest!  They sat together at the table to eat strawberries for a snack, they climbed the stairs side-by-side, and they had conversations.  That game Carter loves, shutting a door and calling for mommy to open it, apparently Hayden loves it too.  They both went into the bathroom and shut the door.  Then Carter called for me to come open it.  When I did I said boo and acted really excited.  They both squealed with laughter, jumped up and down, and grabbed onto each other.  Carter got so excited he hugged onto Hayden and wouldn't let go, almost knocking Hayden backward into the bathtub.  They would run around and play and then go back into the bathroom.  One time Carter went in and Hayden was still playing in the hallway.  Carter stood in the doorway with his hand on the door knob, waiting for Hayden.  When it was time for Hayden to go, he didn't want to leave and Carter was sad to see him go.  We plan to get together again before leaving for the work week.

Summer Fun at the Zoo and Splash Park

Wednesday Carter and I had a busy day.  We went to the zoo for a meetup with two other moms and 3 kids in the morning.  It was so go, go, go with 4 kids since we were doing our best to stay together, which was like herding cats at times.  I didn't get very many pictures due to continuously trying to get Carter to slow down and wait, catch up, or walk the correct way.  By the time we left the zoo it was already well into the 90's and we were both hot and tired.  Towards the end of our trip Carter did something he has never done before.  He pitched a fit and did not want to be in his stroller at all.  The only problem was that he wouldn't walk either.  Between the heat and carrying him my whole side was soaked in sweat.  So I had to do something horrible that I couldn't stand to do.  I had to force him into the stroller and hold him down with one hand while I strapped him in with the other.  Once I got him in he cried for a couple minutes and was fine.  It was the strangest thing.  I think he just wanted the comfort of his momma since he was tired and hungry.  I had packed his lunch so I fed him food a little bit at a time as we walked back to the entrance.

Once home I ate lunch while Carter finished his lunch, I put him down for his nap, and then I headed out for a dentist appointment while Jeremy stayed with Carter.  Shortly after I returned Carter woke up and spent some time playing with his Uncie Jeremy.  After dinner Carter and I went to meet some friends at a splash park.  I tutor for the sweetest boy and his little sister just turned 2.  His mom invited us to meet them at the splash park and I was so excited for Carter to meet them.  He absolutely loved the little girl and would walk right over and squeeze hug her.  When they were sitting down Carter would sit down so close to her that they were touching.  He also loved the boy and would just stare at and watch him.  After playing on the playground for a while he was decently muddy so I took him back over to the splash area to rinse off.  He got all cleaned off and then ran toward the grass, sinking down into a big hole of muddy water.  So much for getting cleaned off!  Later he was walking like a penguin and I couldn't figure out what he was doing.  It turned out he had pooped in his swim diaper which he's never done before and it must've felt strange to him.  Carter was worn out from his busy day when we left and after a quick bath went straight to bed.  I love busy days filled with fun and friends!  I'm also loving Carter making new friends! 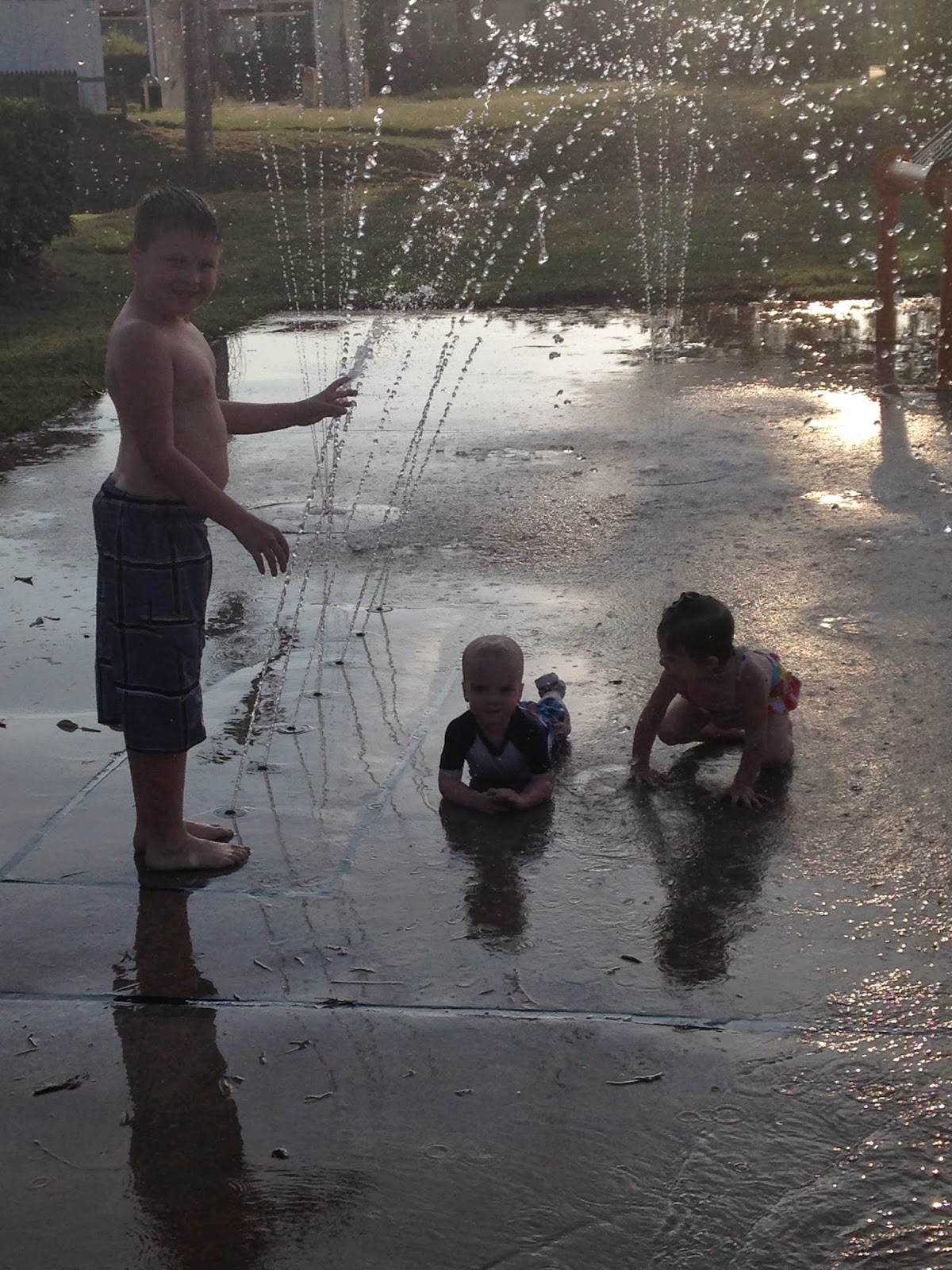 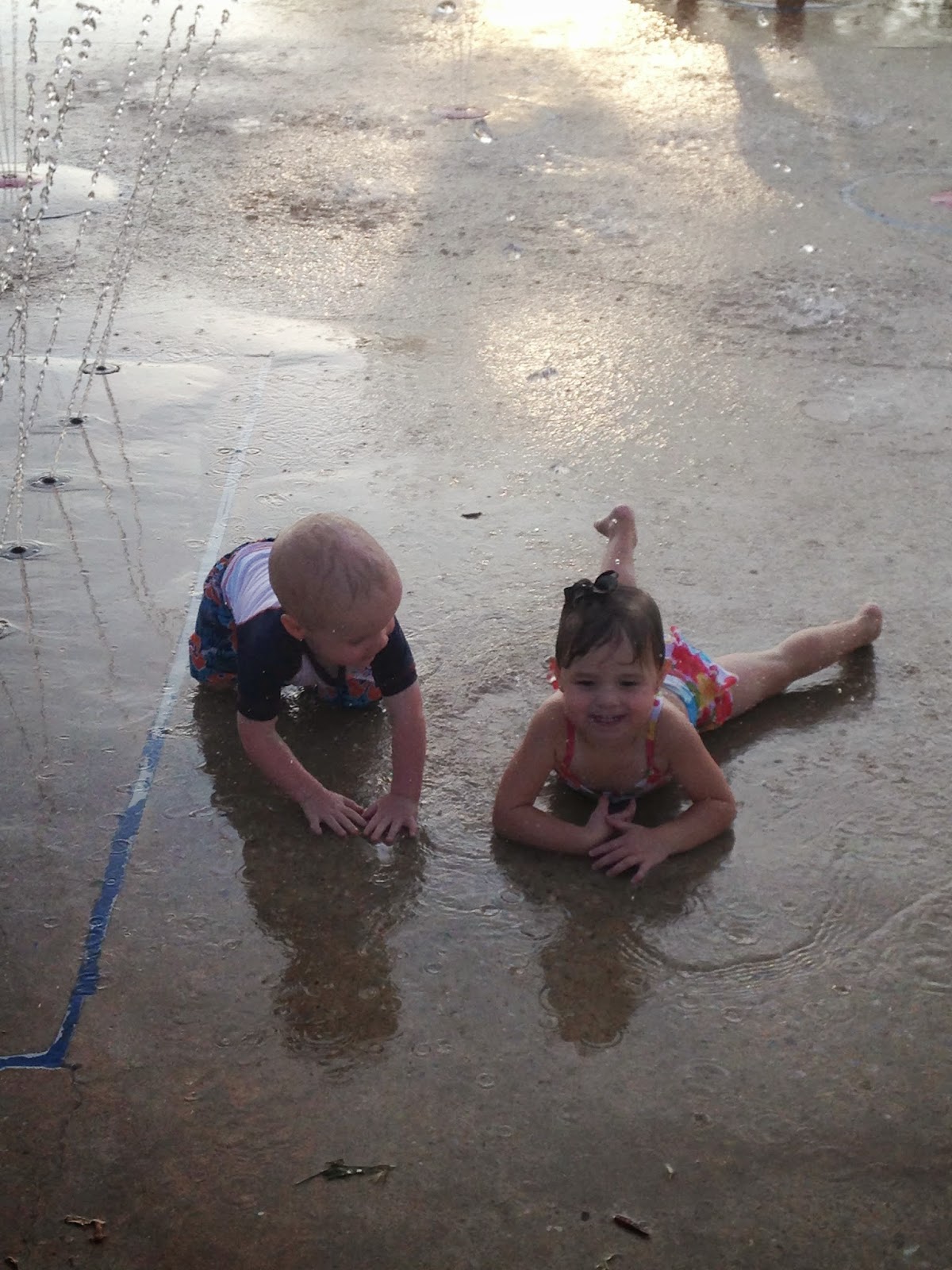 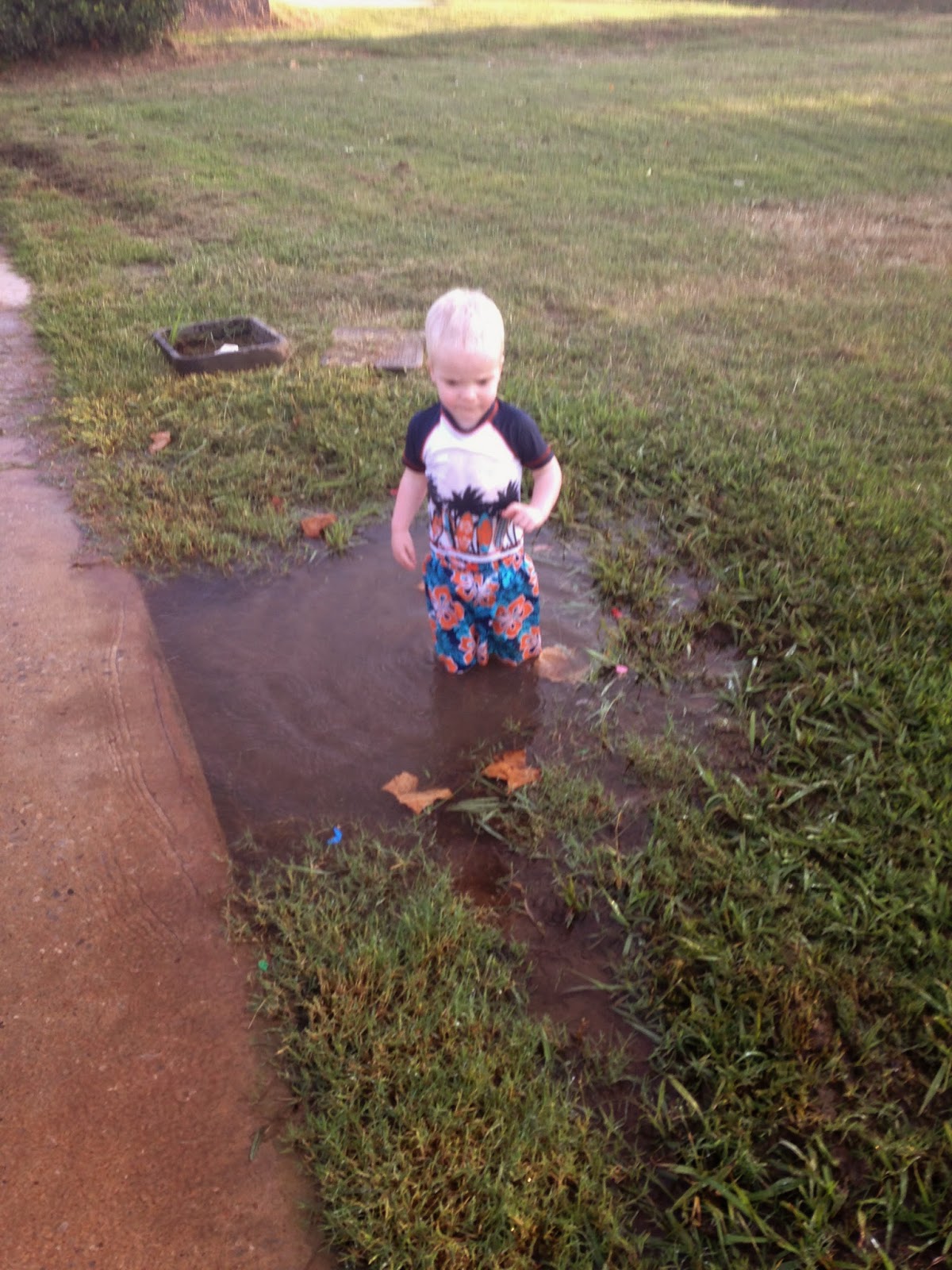 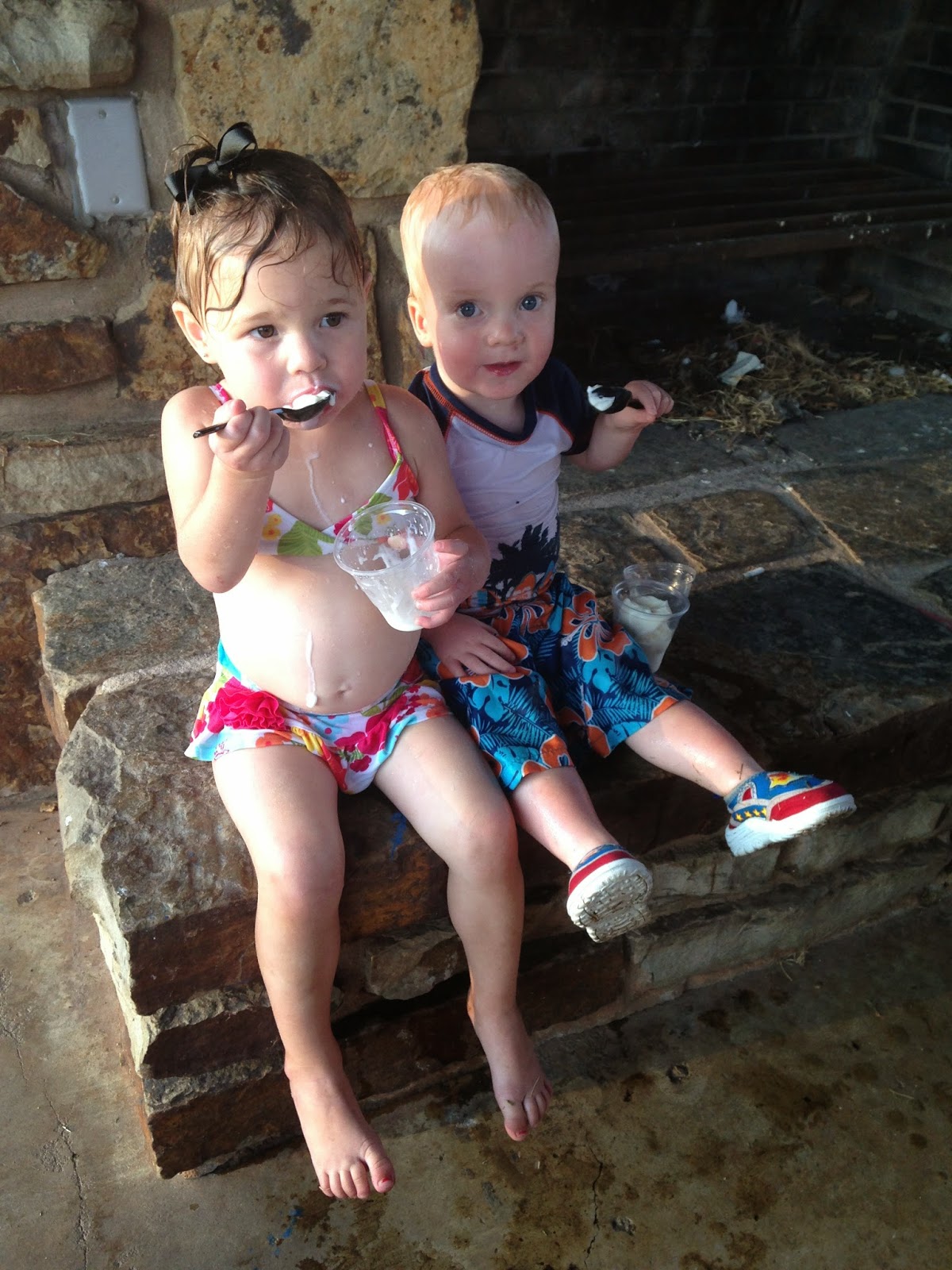 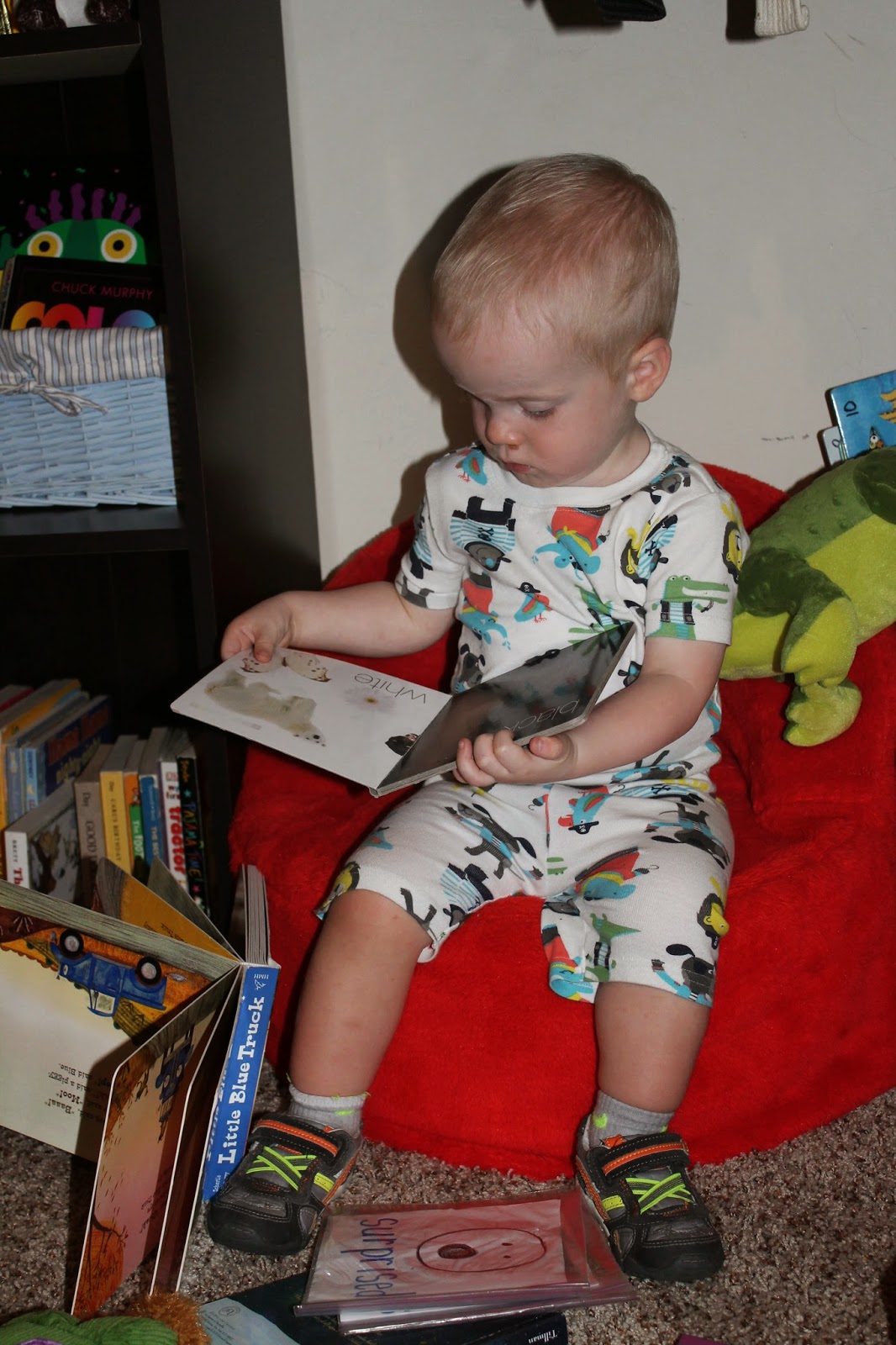 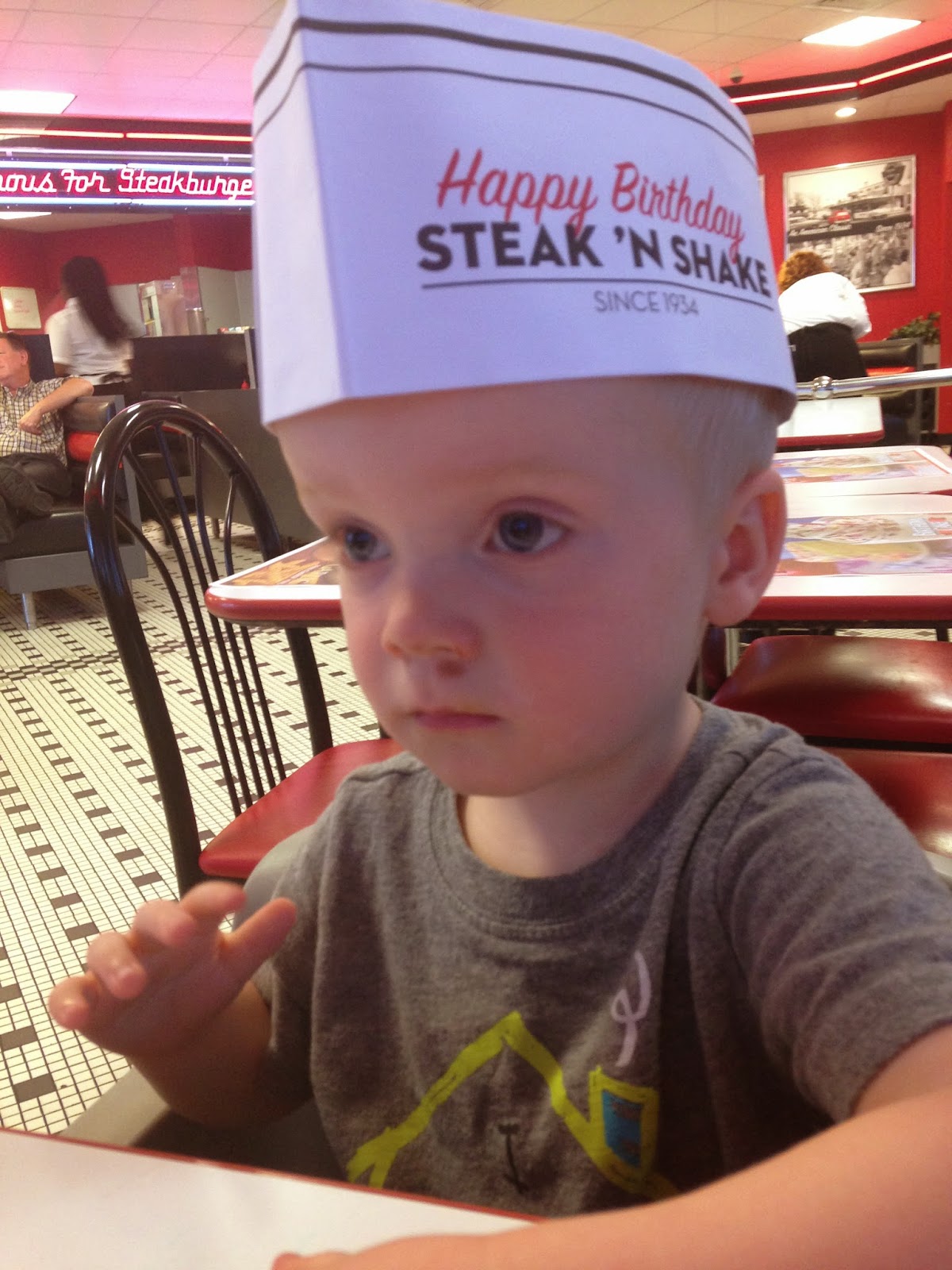 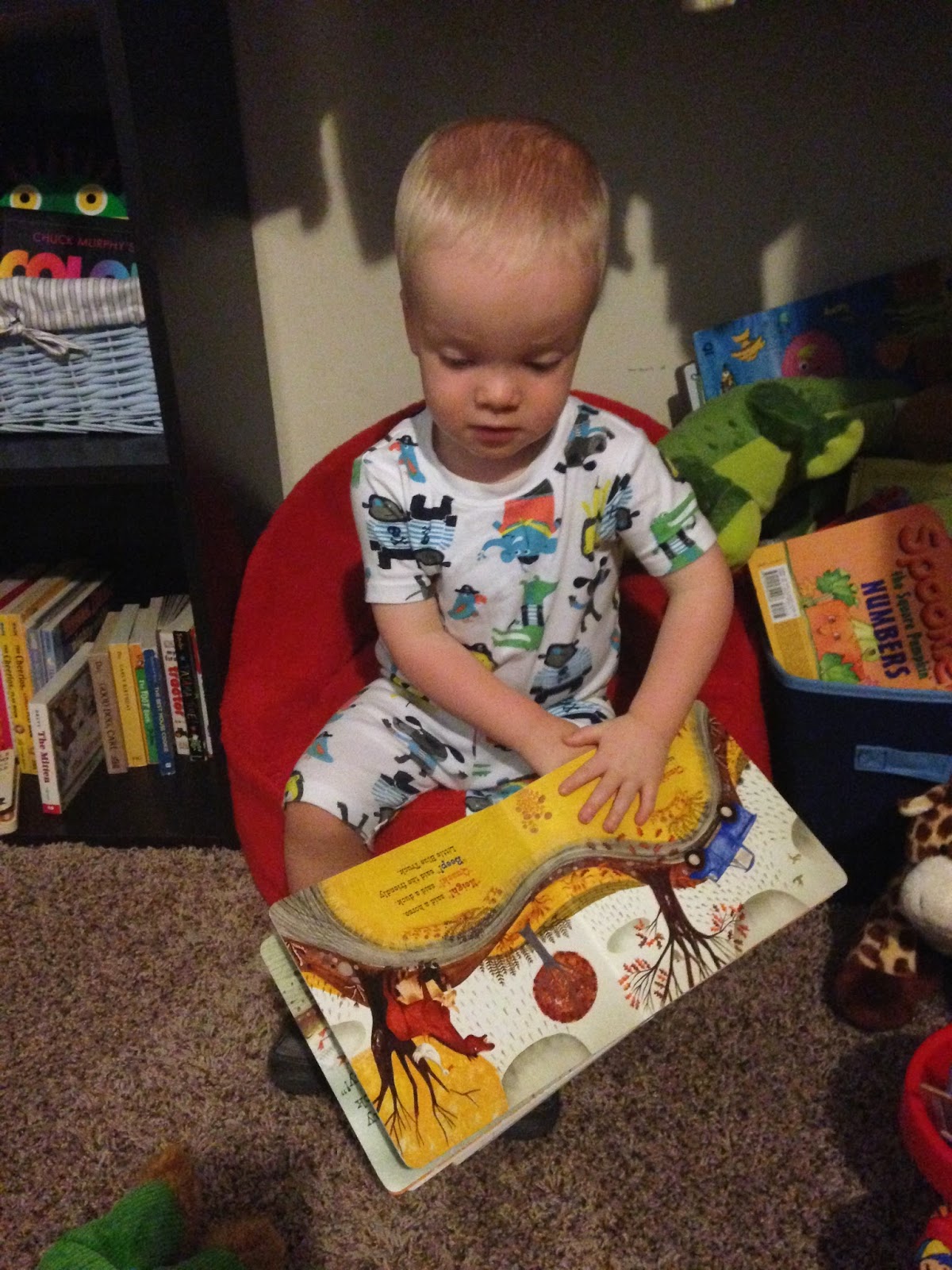 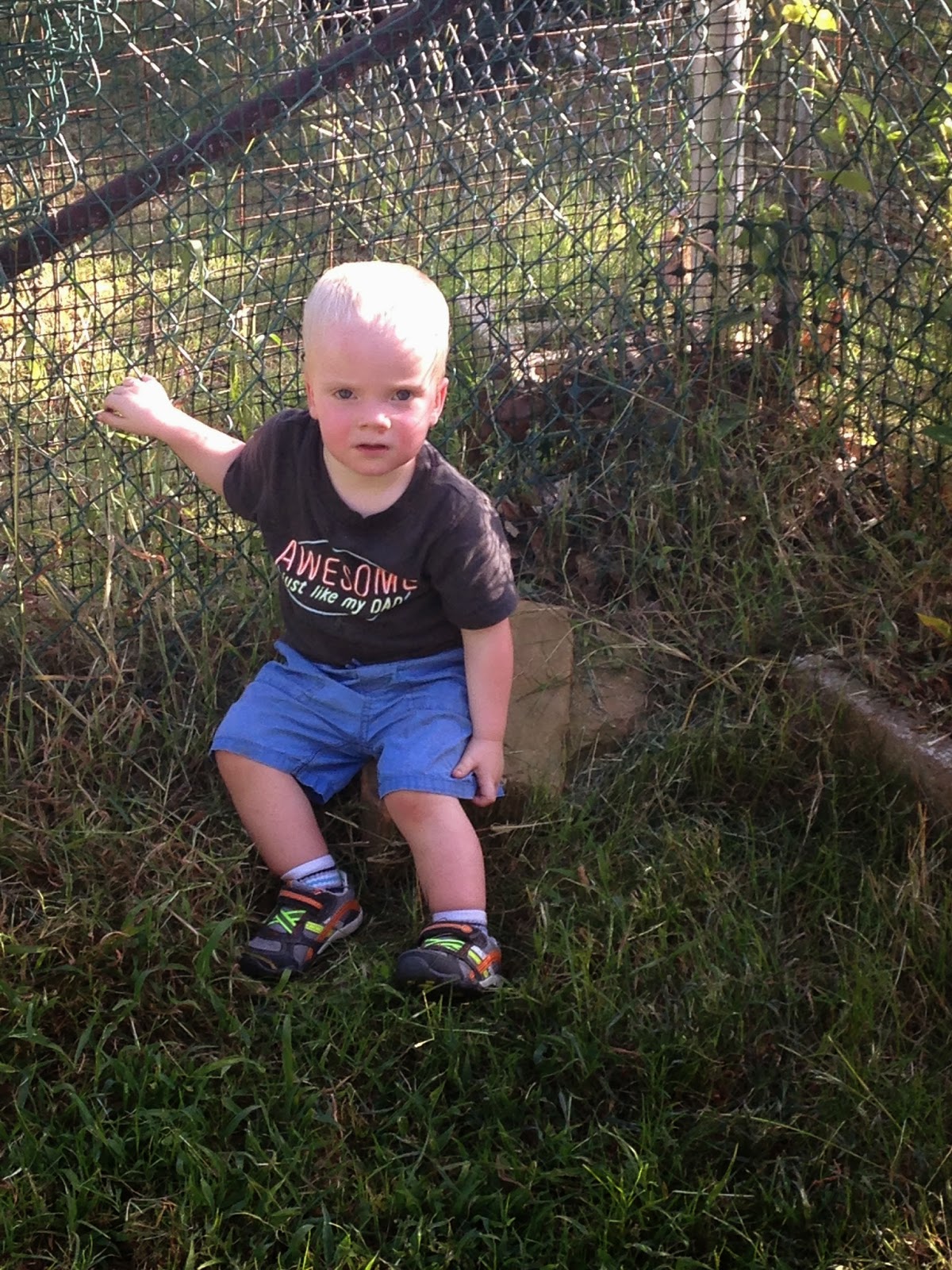 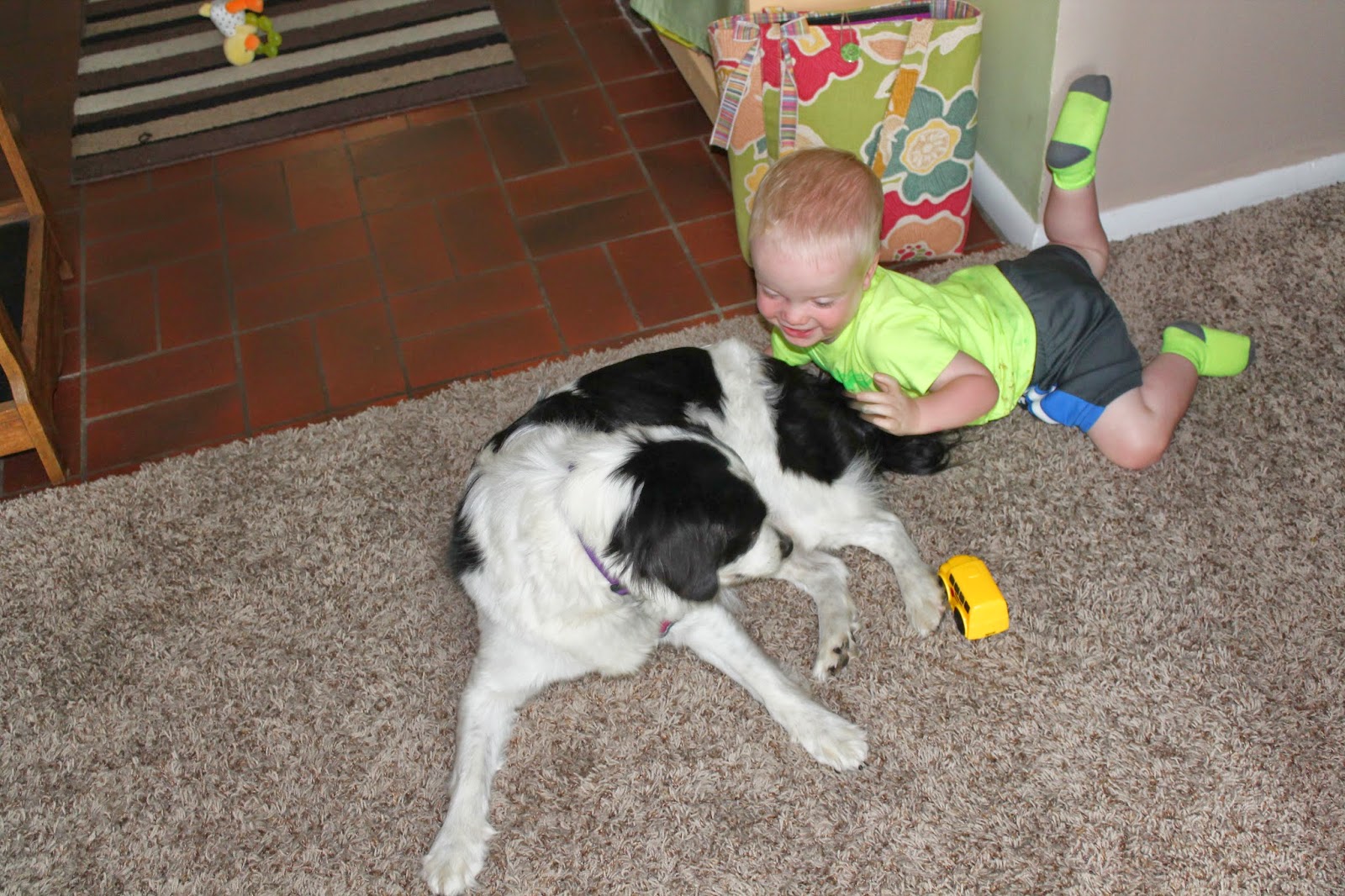 Today is one of our days with Jake.  I've been impressed that each time Jake is here Carter does a little bit better with him.  He hasn't been as jealous and even played with cars while I fed Jake.  Normally he wants to sit in my lap while I feed Jake so he can get attention too.  When Jake arrived this morning Carter even clapped out of excitement and couldn't wait to see him.  When I got Jake up from his nap Carter heard me and came running in to see him.
We did have a hiccup this morning but it didn't have to do with them not getting along.  Carter loves to shut doors, especially the door to his big boy room.  Then he'll stand in the room and yell "mommy" until I come open the door.  He was doing it just like usual this morning as I was putting Jake down for a nap, no big deal.  Except when I went to open the door for him, I couldn't get it opened!  I realized the door was locked which I hadn't even realized it did.  I looked at the knob and there didn't appear to be a slot for a key.  I panicked and rammed the door with my hip, it didn't quite budge although the wood cracked.  Then I ran outside holding the baby monitor so I could still see Jake and looked at the windows.  I could tell there was no way I was breaking into one of them, that was the whole point of getting new windows after we got robbed.  So I went back inside and stood at the door thinking, all while listening to Carter cry for me over and over.  I called Ty, no answer.  I called my mom, no answer.  I called my dad, no answer.  As I was standing pondering what to do or who to call next I decided to try a credit card.  I grabbed a Baby's R Us VIB card out of my wallet and tried using it to unlock the door while I called Jeremy.  Jeremy picked up the phone as I unlocked the door.  Carter very happily came running out of the room to me, crisis averted.  Now what do I do to keep him from accidentally locking himself in again in the future?  I think that will be a solution for Ty!
Posted by Liz Runningmomma at 12:38 PM 8 comments: