There is just something about walking into your house after an extended absence, smelling your house smell, seeing newly vacuumed carpet, looking at the beautiful wall colors you picked out, and sleeping in your own bed, that is so refreshing!  That was all I could think about Tuesday.  During our 5 hour drive from St. Louis to my parents' house I kept picturing walking into our home, smelling our smell, seeing my handsome husband, being greeted by little Harper Leedle, eventually seeing Skippy that night or maybe in the next few days (gotta love cats).  By the time we made it to their house I was anxious to get the heck home.  I quickly threw suitcases from my parents' van into our SUV, fed Carter an early dinner, and we were off!  Tuesday also happened to be my birthday.  My mom was determined to make the day special even though it was a traveling day.  My parents and Jeremy surprised me with cupcakes and presents at breakfast for my birthday and then mom carried the party over into the car with cake on top of ice cream cups with scratch off lottery tickets.  I got 2 tickets while everyone else just got one.  There were only 2 winning tickets and they both happened to be mine!  I had told everyone the best birthday present I could receive would be to see my Ty Ty.  So my parents got up early and got in the car without even showering.  I'm pretty sure Jeremy didn't shower either and he was the first person ready to leave.  I was extremely grateful.

Our 2 hour drive back home from mom and dad's really wasn't that bad.  I thought I'd be all crazy anxious and frustrated to just be there already like I used to feel on my way there to visit Ty on weekends when we were long distance.  I don't know if it was the fact that we'd been averaging 6-7 hours in the car a day so the 2 hours didn't seem like much.  Or maybe it was that Jeremy was in the passenger seat to talk to and keep my mind occupied.  Or maybe it was having Carter in the backseat not totally content to be in the car especially after his nap was interrupted earlier in the day when my mom accidentally bumped into a monkey stuffed animal my dad bought for Carter in a gas station.  The monkey made a horribly loud monkey screech, waking Carter up.  But I was pretty calm and cool.  Carter would start to fuss so I'd ask him who we were going to go see.  He'd reply with "daddy".  Then I'd ask who else we were going to see and he'd say "doggy".  If I asked him who else we were going to see he'd either say "kitty" or start over with "daddy" again.  He must've known his chances of seeing Skippy that night would be pretty slim.  The closer we got, the more excited I got.  When we pulled into the driveway I laid on the horn to let Ty know we were home and my heart skipped a beat when I saw him emerge from the house.  Getting out of the car and hugging him was the best feeling ever!

Ty stayed outside with Carter to unload while I ran in to the bathroom.  That gave Harper time to ambush me and get petted before Carter came inside.  After Ty and I unloaded the car, Carter came inside.  When he and Harper looked at each other it was like the chorus "Reunited and it feels so good!" started playing in the background.  He ran to her, she ran to him, and then Harper covered Carter's face with kisses.  Then Carter wrapped his arms around her trunk for a big hug, giggling and squealing the whole time.  All night long Carter was all over daddy and Harper.  He would grab onto Harper and not let go so as she walked, she actually dragged him along on the floor.  It was hilarious.  Carter was also excited just to be home, to have his toys, to be in his house.  He ran laughing down the halls and would run up to one of his toys giggling, play with it for a few minutes and then run to something else.  Carter's car seat was a mess and needed cleaned so Ty brought it in the house so I could clean it.  I couldn't believe it when Carter ran over to it and hopped in.  He wanted to be in his home away from home.  We joked that he was in it for the majority of his life that he could remember.  When I went to put Carter down for bed he kept pointing to the bedroom door and crying "daddy" so I took him out to the living room to show him Ty was still there.  We tried again and he was still crying for Ty, but wanted me to hold him, so Ty eventually came in and laid on the floor so Carter could see he was still home and hadn't gone anywhere.  It was so sweet, but so sad at the same time!

Yesterday, our first full day home, we only left the house to run.  The rest of the day we did laundry and soaked up being home and stretching our legs.  It was the best day.  Just me, Carter, Harper, and Skippy.  Quiet, relaxed, no where to go.  Even with the padding all off, washed, and air drying, Carter got in his car seat again.  I swear that boy is crazy!!!  Partway through the day I could tell Harper was starting to wonder why she wanted the little boy to come home so badly.  She was starting to lose her patience with him hanging all over her!  Now that he's not all over her due to missing her, she's much happier about his return!
Posted by Liz Runningmomma at 1:12 PM 2 comments:

Email ThisBlogThis!Share to TwitterShare to FacebookShare to Pinterest
Labels: traveling with a toddler 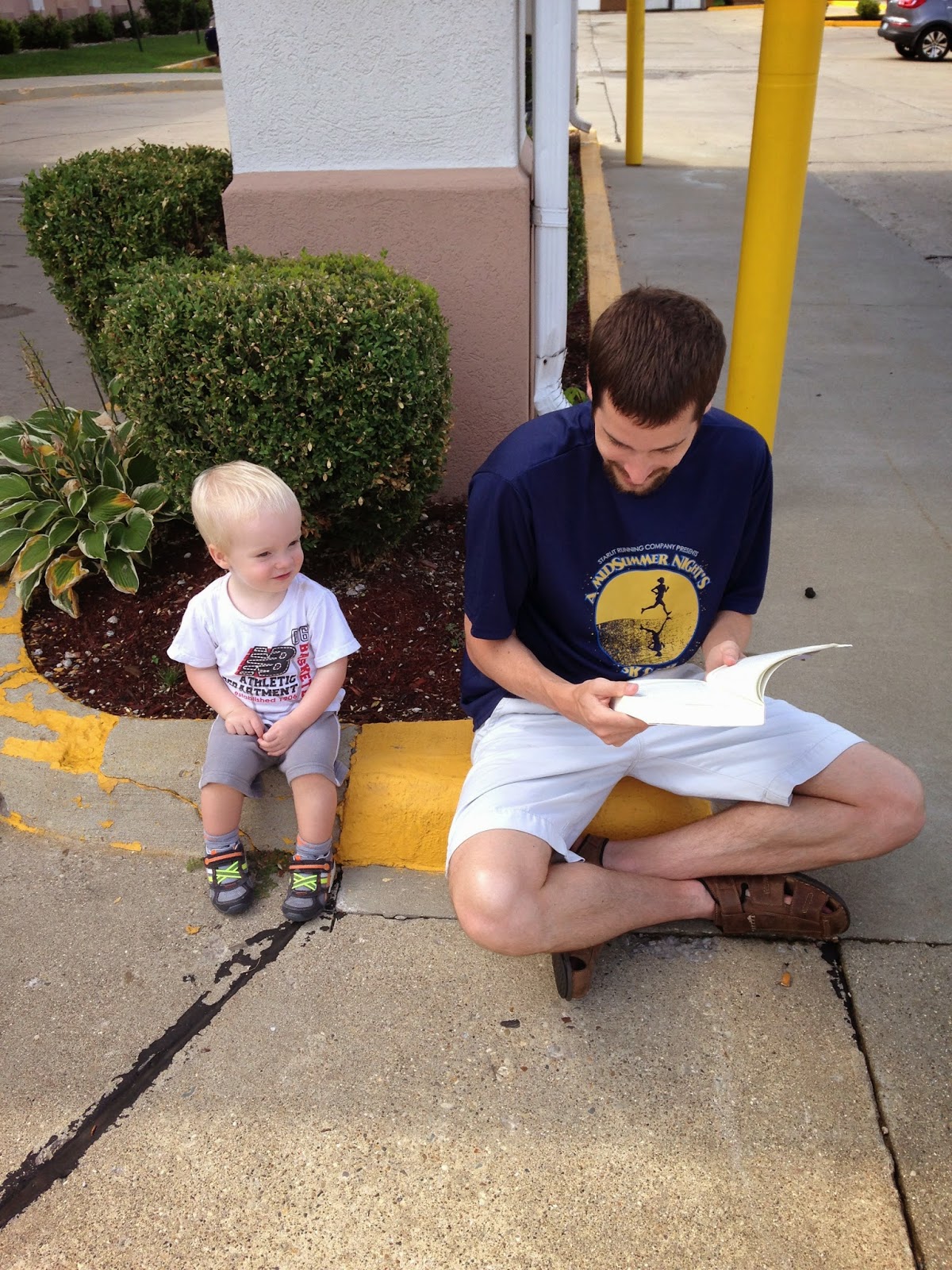 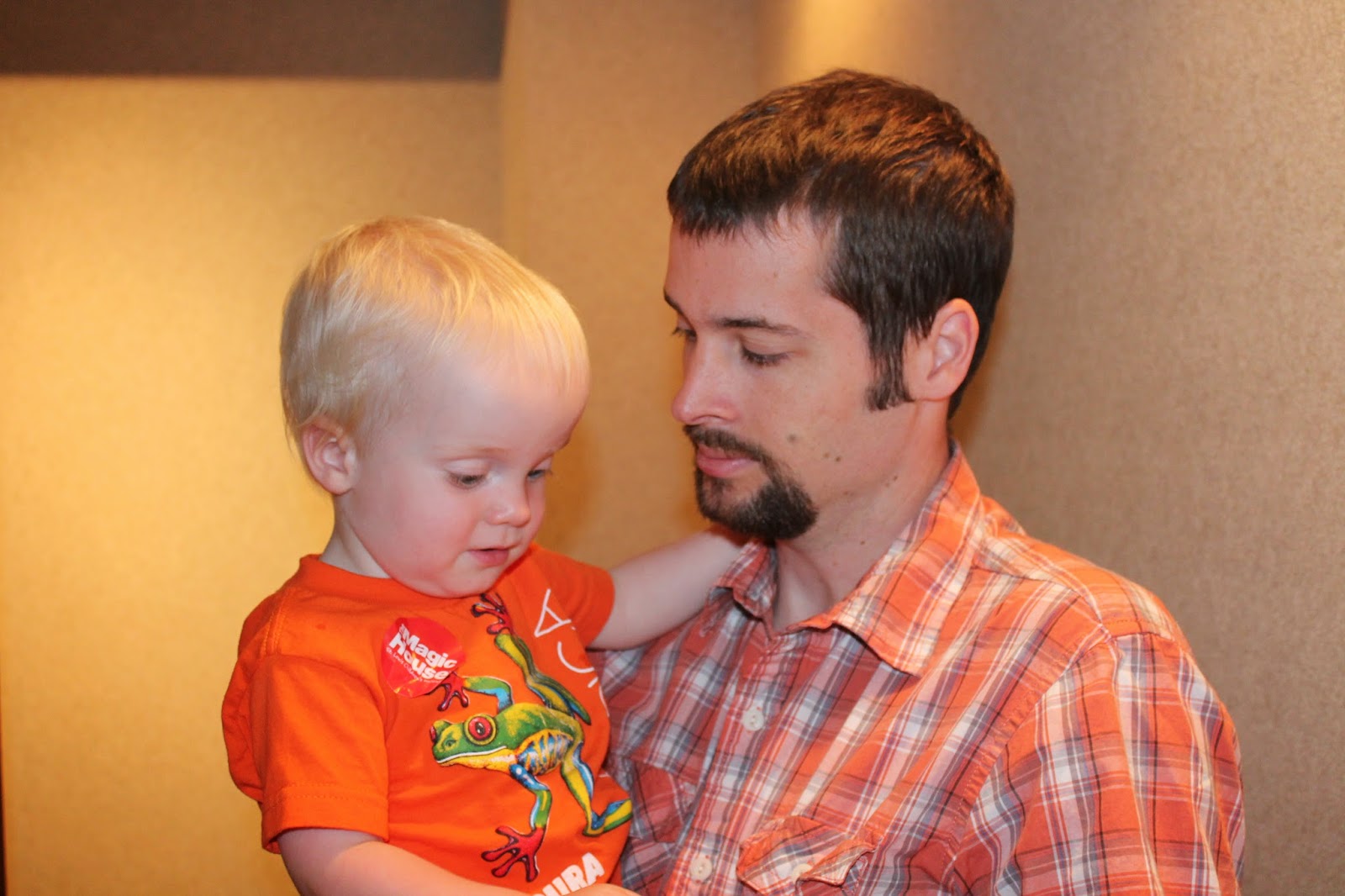 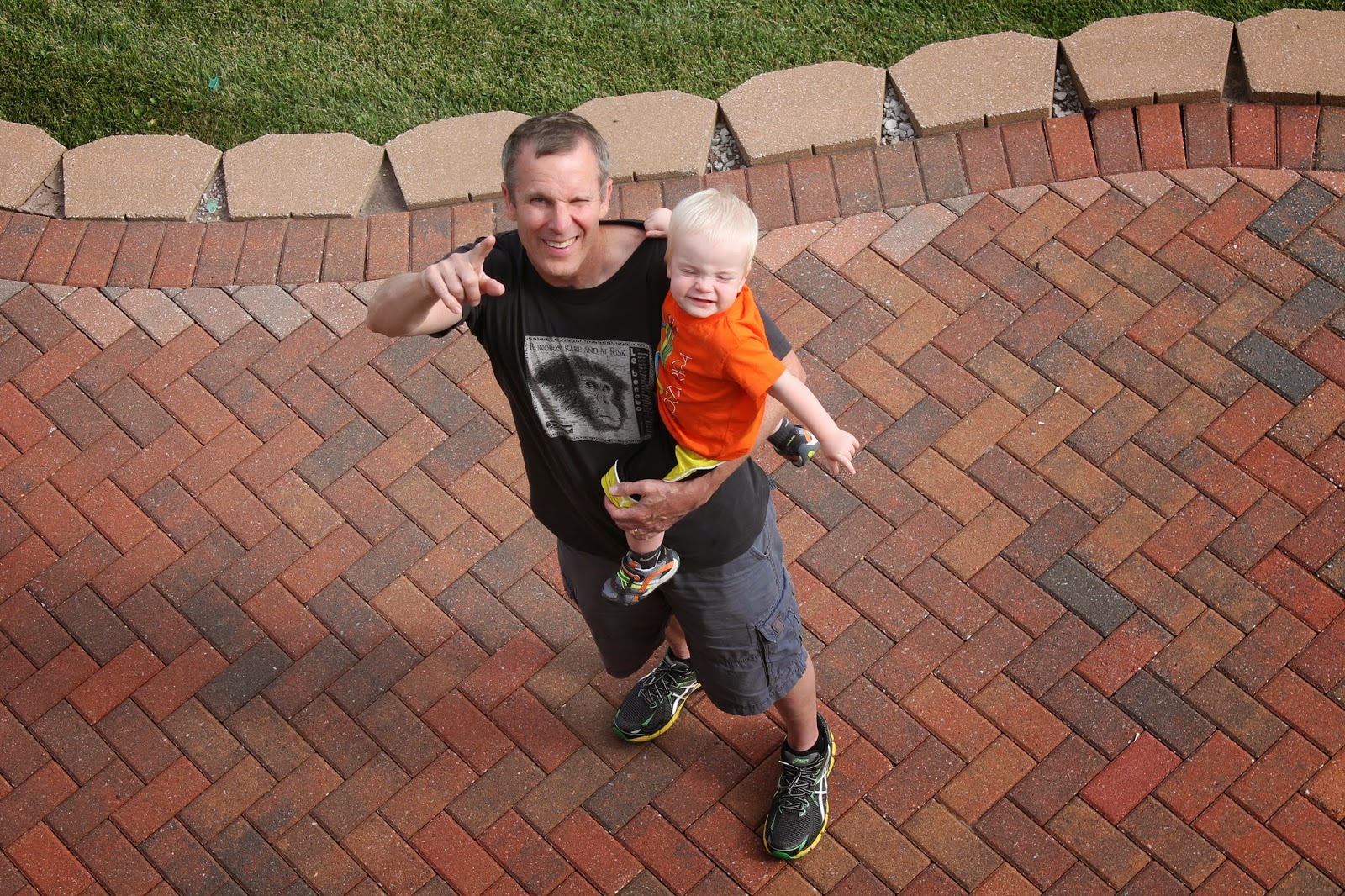 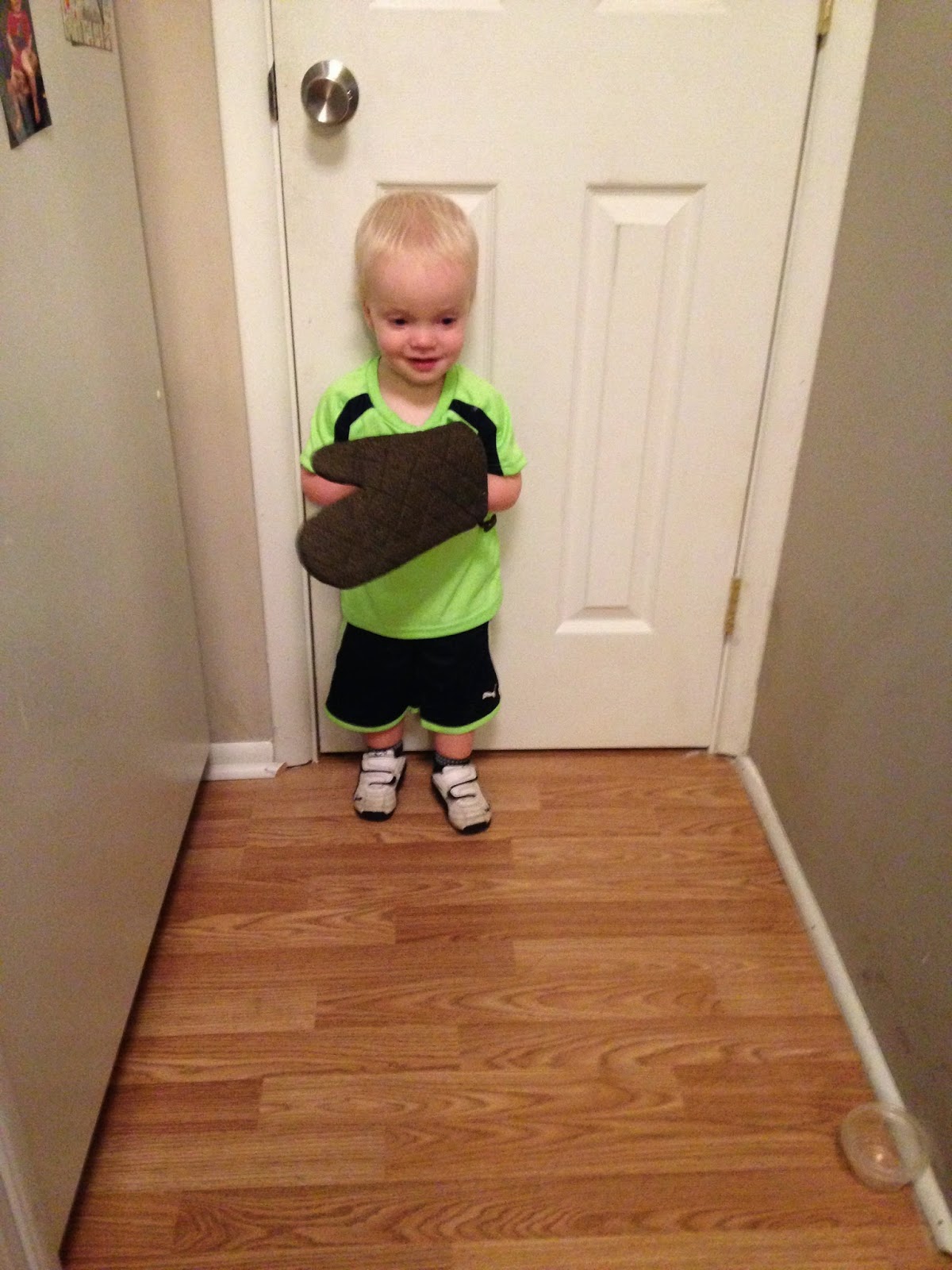 Posted by Liz Runningmomma at 11:34 AM 2 comments:

This morning Carter woke up earlier than he has most days of the trip since we went to bed close to his normal bedtime.  We got up and headed down to breakfast and to play at the indoor play area.  Last night when we arrived and he saw the indoor play area he ran to it squealing even though he was tired and was so excited to climb on it.  My mom met us at breakfast and through talking decided it would be best to head to the Magic House in the morning before Carter's nap.  It's easier to push his nap back than it is to put him down early and hope he wakes up early.  I swear when I do that he naps for 3 hours!  Aunt Netta had suggested the Magic House when I said we'd be hanging around Monday waiting to see my dad's family when they got off work.  We had originally planned to go to the City Museum, but the Magic House was more age appropriate.  I was so glad she suggested it.

The first room we entered had a play kitchen and Carter had a blast.  He put strawberries in the oven, turned the dial, tried to eat fake waffles, and put fruit out on plates.  I think he could have played there for hours.  We finally convinced him to try out the next room with a tree house, inside play area, and a sand box filled with recycled plastic.  Carter loved the sand box and again could have played there for an hour.  He loved filling the scoop and even enjoyed climbing into the sand box to sit in the middle.  The inside play area had playground equipment.  Carter's favorite was doors in shapes that opened with clear plastic behind them.  Jeremy and I would take turn standing at a window and he'd open it to find us.  He thought it was absolutely hysterical. 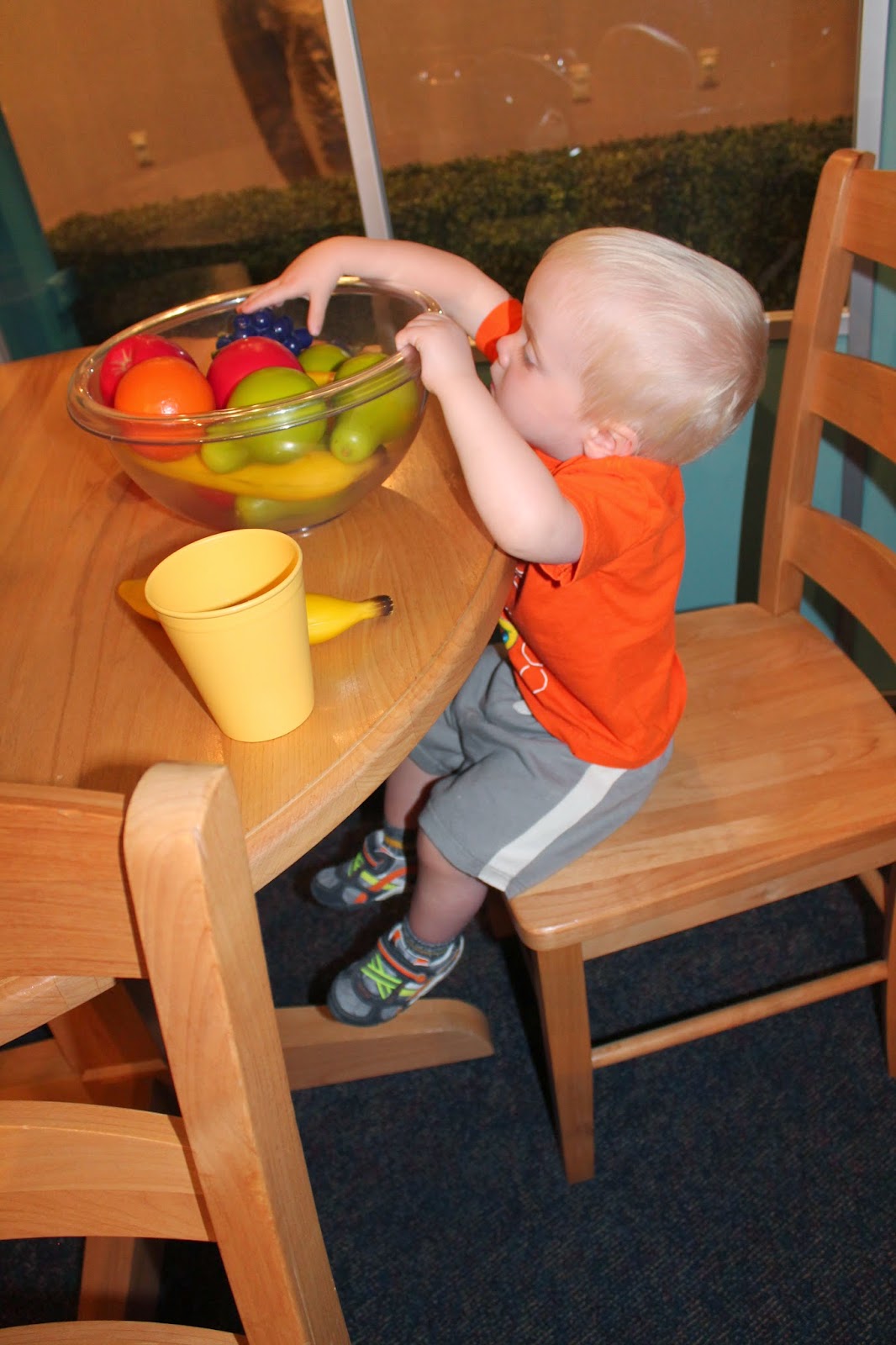 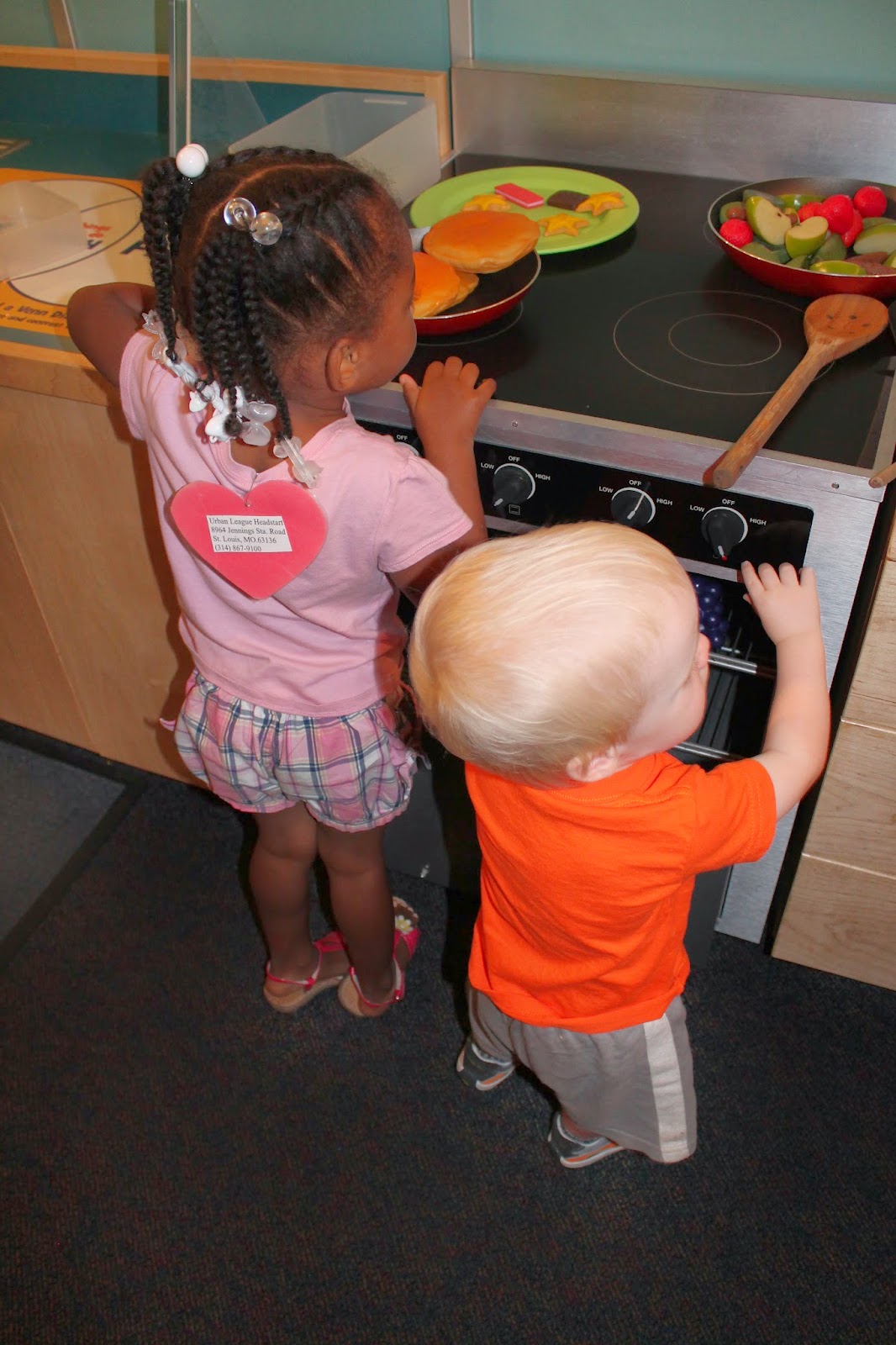 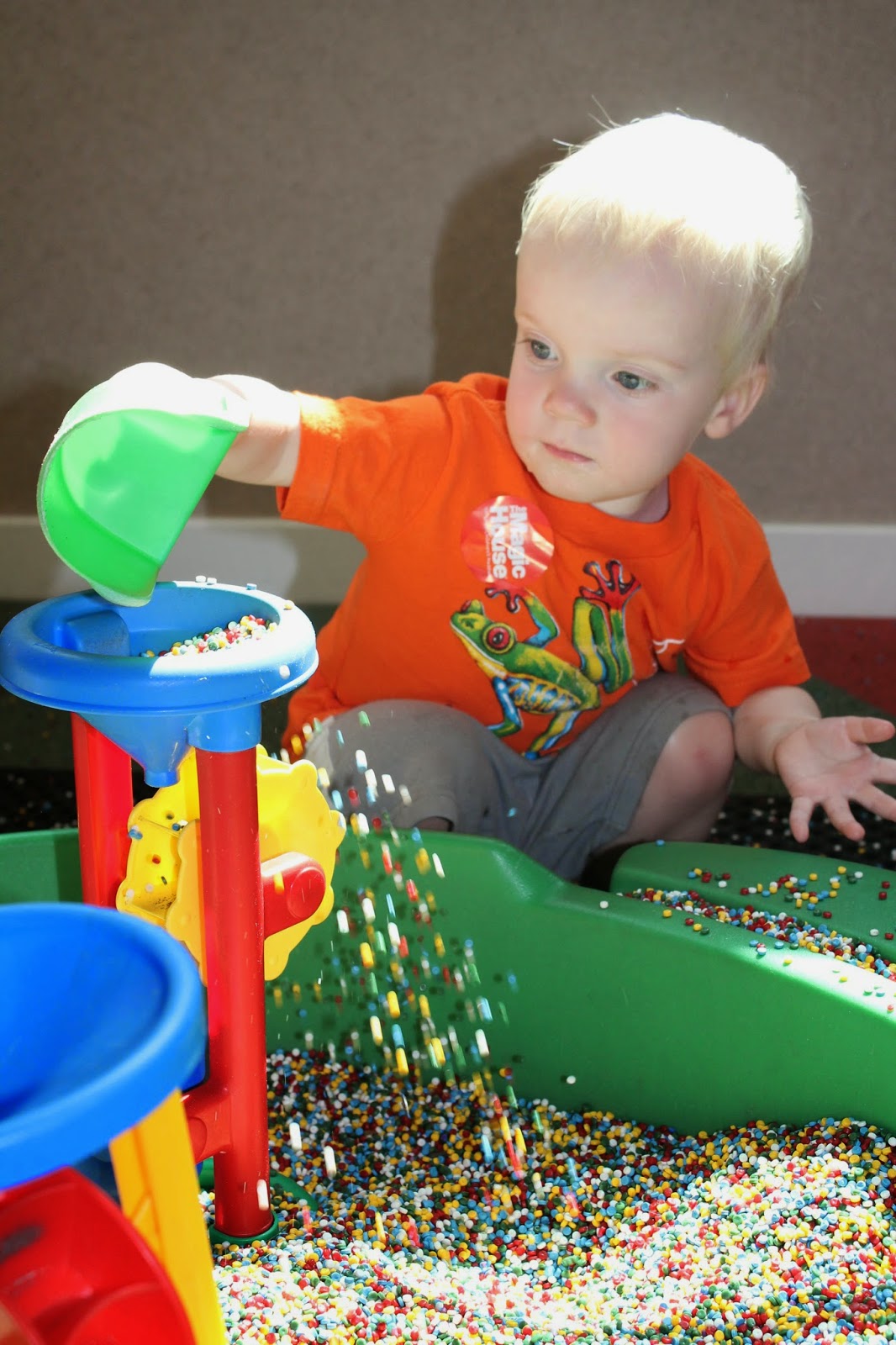 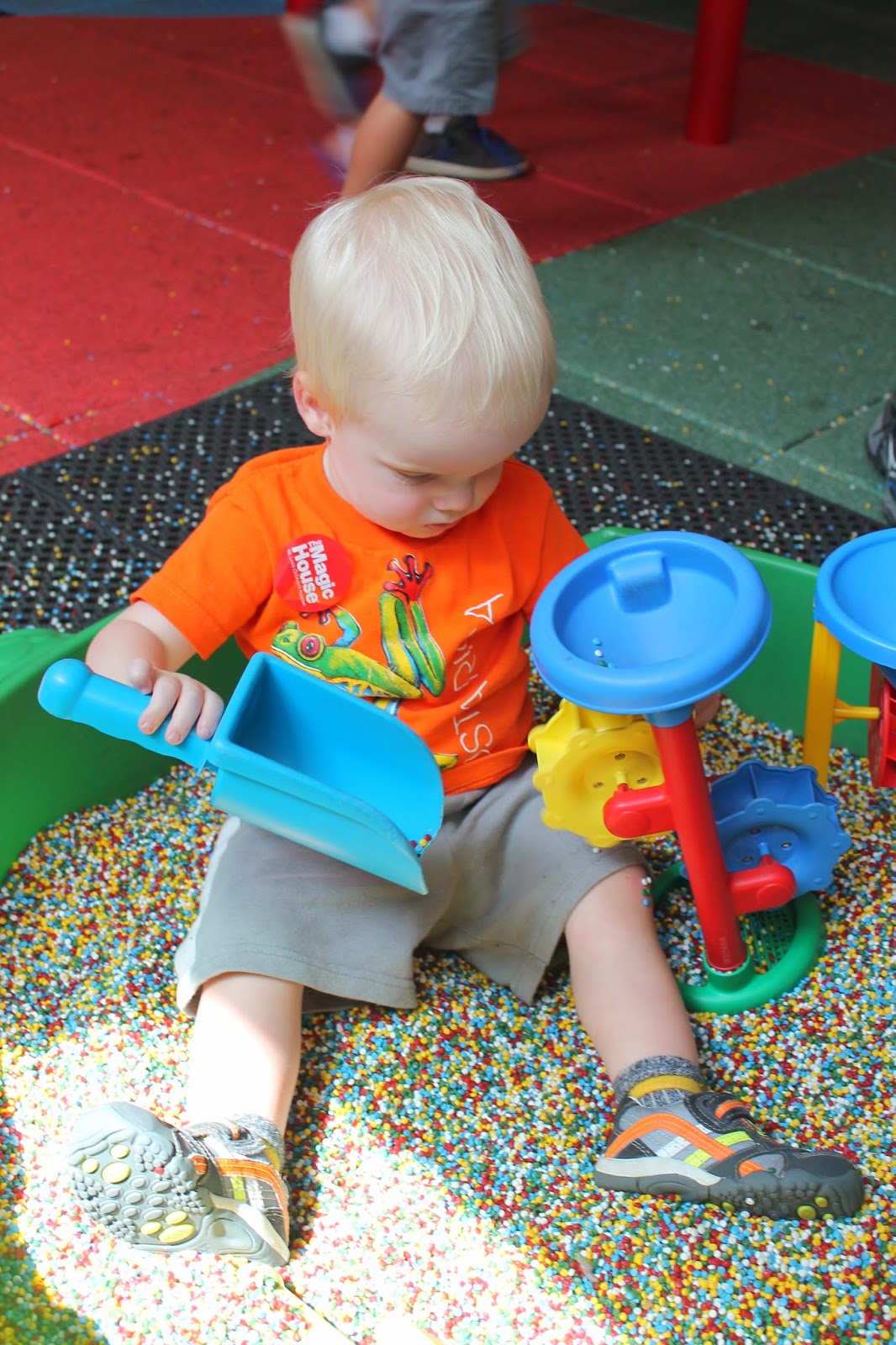 From there we went to the basement with an area about government with an oval office and everything.  I got goosebumps from all the amazing teaching points and the fact that they had books related to each topic within the rooms.  There was also a construction area.  My mom had been dying to see Carter climb up the bean stalk which was 3 stories tall.  He was too small to do it by himself so I went with him.  Let me tell ya, there were a few spots that were tight fits.  By the time I made it from the basement to the 2nd floor I was out of breath with rug burns on my knees and elbows, but Carter seemed to enjoy it.  Carter was starting to tucker out by that time, but still enjoyed the outside garden, model trains, and giant kaleidoscope.  When we left the train area he cried and said "choo choo" over and over. 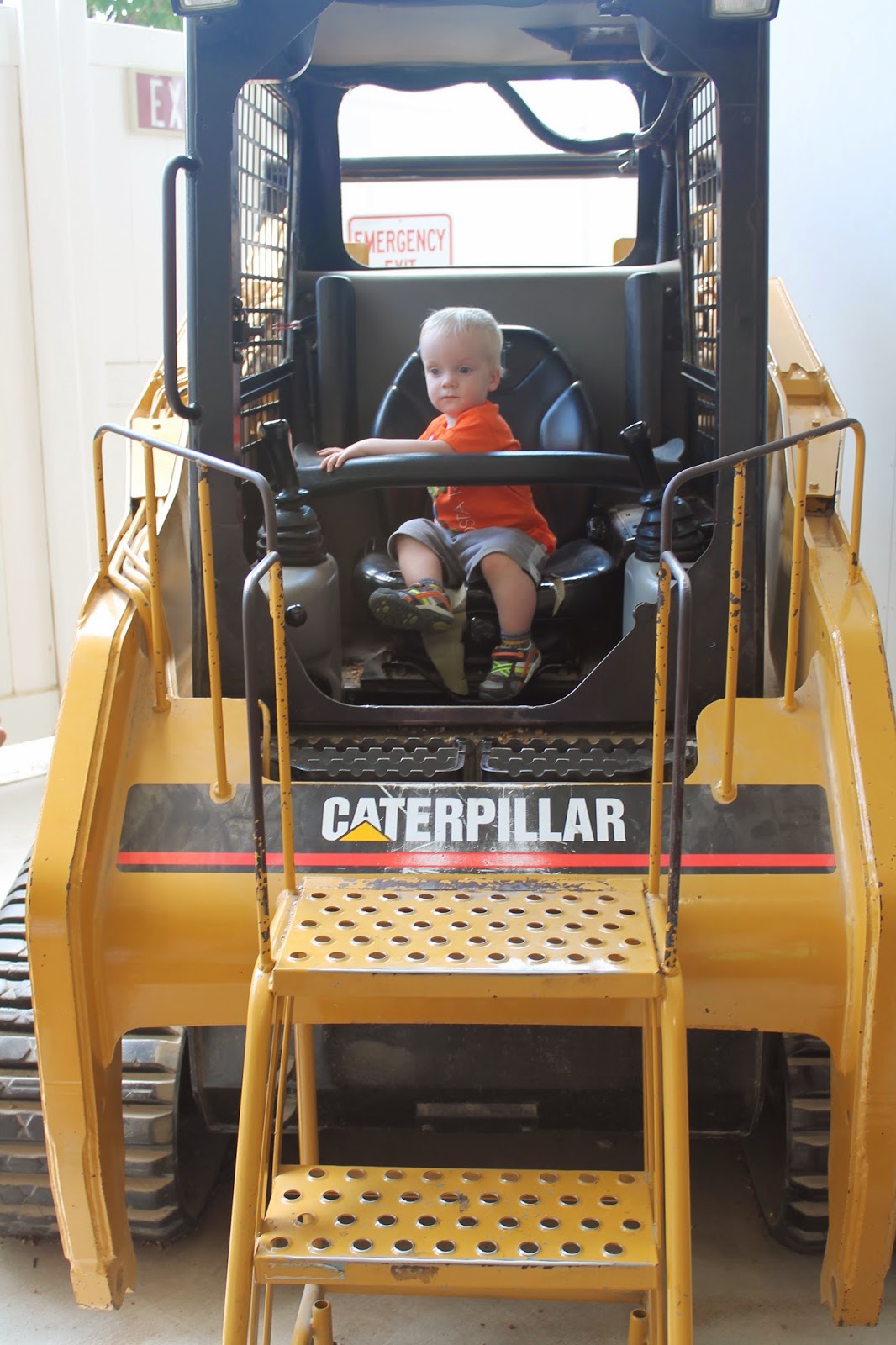 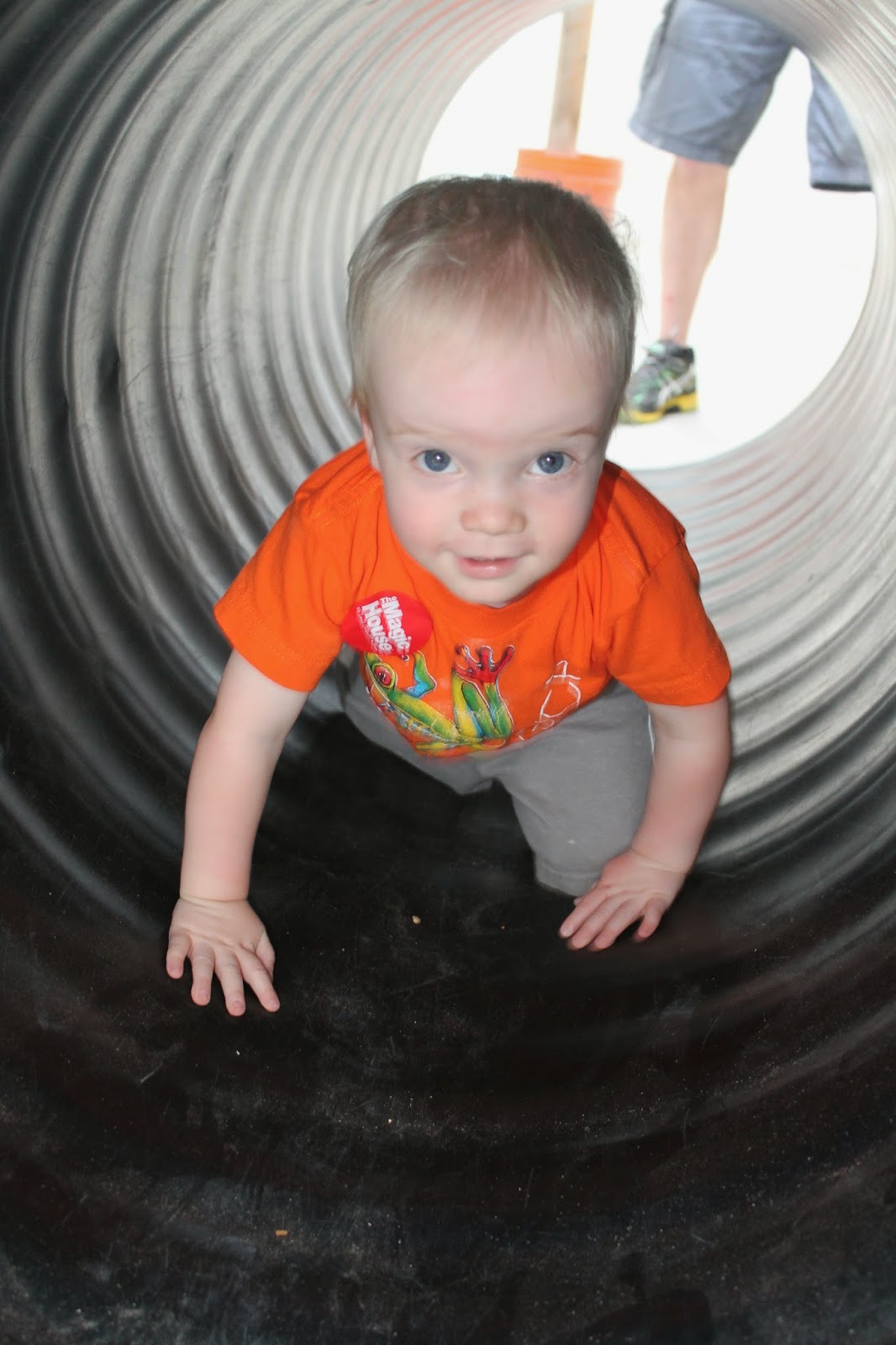 In an attempt to make my way back toward the entrance I headed the wrong way and found a whole new section of the museum which I didn't know existed.  I wished we had started in that area because is was for children 0-5 years old.  Carter would have absolutely loved everything there.  There was a giant water area and Carter tried to climb on top of it to get in the water.  When I told him no and pulled him down he began sobbing.  That's when I grabbed him and high tailed it to the food area to get him lunch so we could take him home for his nap.  Little man had hit his breaking point.  I wished we had days to spend at the museum going through and really enjoying everything.  As it was there was so much to do that we had to rush through some areas and completely missed others.  If only we had somewhere like that closer to home!

Everyone was impressed with Carter's "super blonde hair" and asked where he got it.  He gets it from his daddy!  Carter was instantly smitten with my Uncle Dan and loved to follow him around and hang out with him.  My Uncle Dan let him play in the waterfall they have in their entryway.  I joked that to become Carter's BFF, just let him do something I normally wouldn't let him do.  When we ate dinner I took Carter's food to a table on their deck and let him sit in a chair.  My grandma and cousin Ian were already sitting so I headed back in to fix my plate and Carter's drink.  On my way back in I decided to grab my camera to get a picture of Carter sitting next to Ian.  I was impressed that Carter wasn't at all concerned that I left him.  Once I made my plate and came back out the table was full so I sat out in their yard.  Carter was at a table with mostly people he hadn't seen in a year with my grandma and grandpa being the exception, he saw them at his 1st birthday party, and he was just as happy as could be eating his dinner.  I was so proud of him and couldn't believe what a great job he was doing!  The night went by too quickly and before I knew it grandpa and I were blowing out candles on a joint cake.  By the time we were opening presents Carter was on the verge of an overtired meltdown.  It was past 9:00 and baby boy normally goes to bed at 8:30 at the very latest.  He went to the door, grabbed my shoes, and brought them to me saying "go, go, go".  He couldn't have made his wants any more apparent!  He's such a cutie pie!  Tomorrow morning we'll get up and start the drive back to home sweet home.  I can't wait to grab and squeeze Ty's face.  Seeing him tomorrow will be the best birthday present I've ever received!!!!