My Boston Dreams and Other Coronavirus Things

In 2018 I trained for the Route 66 Marathon with hopes of qualifying for the Boston Marathon so I could run Boston in 2020. I qualified with 4 minutes and 32 seconds to spare under the standard, read about the race here. Once I qualified I had to wait 10 months to register for the race. Once I registered for the race I had to wait weeks to find out if I actually got in. I was so excited to train for Boston and couldn't wait to get started! My training cycle started the last week of December and it was going so well. In all my recent training cycles I ended up with a slight injury which caused me to miss out on a speedworkout or long run with a couple weeks of lower mileage to keep it from getting serious. This cycle a friend suggested I take a down week every once in a while so I tried that out. Every 4th week I ran lower weekly mileage. It worked so well and it was the first training cycle I'd had in years where I didn't miss a single workout. All my speed work and long runs went as planned and I was feeling so strong. It was the best shape I'd been in since college. At the Sweetheart Run I ran very similar times to what I ran last year after running a 20 mile long run workout the weekend before and with fewer speed workouts and more marathon-based workouts. I was so excited to run the St. Patrick's Day 5k and Chisholm Trail Half-Marathon to get a gauge on where I was race-wise going into Boston.

During the 10th week of my 16 week training cycle I had a long run workout that scared me a little bit. It was 20 miles with a 3 mile warm up, 8 miles at marathon pace, 1 mile at tempo pace, 4 miles at marathon pace, 1 mile at tempo pace, and a 3 mile cool down. It was an abbreviated workout from the original I had seen after talking to my friend, Sara, who helped me determine what would be best for my training. The workout went really well. I hit an average 7:31 pace for the first 8 miles with mile 3 being 7:48 due to lots of hills in that mile. Then my first tempo mile was 6:52. During my 4 miles at marathon pace I had turned back into the wind and the wind had really picked up. It was tough but I was still able to average 7:38 pace for those miles. Then my last tempo mile was 7:18. All the sudden as I slowed for my cool down, I was dying. I had felt really good during the workout portion, just slowed a bit due to the wind. But during my cool down I was struggling at 10:00 pace which is pretty crazy for me. I finished out my run and normally walk a cool down but couldn't manage it. I walked in the house and laid on the floor feeling miserable. I ended up taking a bath because I didn't think I'd be able to stand in the shower. I got worried, if this was how I felt after a 20 mile long run, how was I going to manage a marathon?! That evening I hadn't started to feel any better and was having chills so I took my temperature and I was running a fever. The next morning I went to Urgent Care and tested positive for Flu A. That made me feel a bit better because it explained feeling so terrible at the end of my run. I think it hit me during my cool down. Since I had gotten a flu shot and was prescribed Xofluza the doctor was optimistic that I would be able to return to work on Tuesday. I was at Urgent Care when they opened on Sunday morning. She said as long as I had been fever free for 24 hours, I would be able to go to work.

Tuesday rolled around and I was still running a temperature. Anytime I got up and moved around, my temp would spike to 100-103 even when on Tylenol. It was miserable. My body ached and I couldn't stay awake or eat anything. Finally on Wednesday when I was still running a temperature and feeling miserable, we decided I needed to go back to Urgent Care. At that point I also had a sinus infection and an ear infection. I was starting to worry that I was going to miss my half-marathon that following Sunday. Around this time the coronavirus had made it's way to America and people were getting worried. I had friends concerned I might have COVID-19, but I had tested positive for the flu and my lungs were clear. They even did a chest x-ray at Urgent Care to make sure when I'd gone back on Wednesday. I got antibiotics to clear up the infections and started to feel a little bit better. But then 6 days into the antibiotics I started to feel worse again. At that point I had tried to run a couple days but then started feeling really terrible again so I stopped running again. Monday rolled around I was still feeling like crap so I called my doctor's office that evening. They called me in a different antibiotic and finally the next day I started to feel more myself. After 10 days of being sick, I was finally back to running! It was my longest break from running in years and coming back has been a bit weird. I'm not used to feeling wonky and semi-out of shape but I'm sure everything will come back pretty quickly since I was in really good shape before getting sick. I think that 20 mile long run weakened my immune system enough that I just got crazy sick. It was rough.

During all my days in bed feeling miserable the Boston Marathon got postponed to September 14th. Then the half-marathon I was planning to run got cancelled. I think it helped getting the news when I was so sick because I couldn't fathom coming back to run a marathon or a half-marathon for that matter. I was disappointed I'd put in 10 weeks of training (with an additional 4 weeks of prep before my official cycle began), three 20 mile long runs, and a 22 mile long run with no marathon to celebrate the training, but I felt like the race officials made a very smart decision. I cried a little, mostly from pure exhaustion and I've had a few dreams about it, but I'm at peace with it. When Oklahoma made the decision for schools not to re-open this school year and I thought of all the seniors who have trained for 4 years for a huge track season (or any other spring sport, but I identify the most with track runners), possibly chasing school or state records or state medals, it broke my heart. It also put me missing out on running a marathon that I may or may not have run a PR in after training for less than 3 months into perspective. It's just not that big of a deal and I still get to run Boston, I just have to wait some more. As the title of one of Mo Willems' Elephant and Piggie books says, "Waiting Isn't Easy," but I'm pretty good at it and I can do it! The Olympics have also been postponed and those athletes whose entire lives revolved around training the past 4 years to make it to the Olympics now have to wait an entire year to shine, that is sacrifice. That is hard. That is something to feel grief over. Me waiting 5 months to run my marathon? Not too bad.

After getting so sick after my 20 mile long run, I'm a little nervous about starting into marathon training again this summer, but I'm still excited to run Boston. I'm worried about lowering my immune system through super long runs again, especially if COVID-19 is still floating around. Who knows what kind of long-term damage it is doing to lungs? I've been taking this isolation super seriously. I have always had a really strong immune system and most the time when Ty gets sick, I don't. But then getting hit so hard with the flu, it shook me a little and made me concerned if I do come down with COVID-19 I'll be one of the rare cases of a 30 year old being intubated. So I have been home for 20 days with no contact with anyone outside of my family, only venturing out to go for runs. And honestly, it's been pretty nice. I'm sure once May rolls around we'll all be ready to go somewhere but for now it has been nice. Carter misses his friends at school and Elise does too, but this has been good for their relationship. They play together so much every day with an occasional fight, but hardly any for how much time they are spending together.

We really lucked out that they are the perfect age to be confined to home and for me to be homeschooling them. Carter is in 1st grade which is the grade I taught for 7 years before staying at home (including student teaching). Elise isn't as invested in her friendships at school and most of her learning is play-based. Carter loves school and that transfers to homeschool. He loves homeschool and if I wait for too long after 8:30am to get started, he starts asking me if we can start school. Yesterday I gave the kids a break to play and went to the bathroom. Carter came in and said, "When are we going to start school again?" It was so cute. Sunday I worked on making a rough daily schedule/lesson plan with links to different resources given in an email sent out by Carter's school district and different resources I saw posted online. Our day was structured like my 1st grade classroom. On Monday we started at 8:30 and finished at 2:30. At the end of the day Elise was exhausted and threw herself to the floor crying. Since then we've very loosely followed my schedule, making sure we get our reading and math blocks. There's a heavy emphasis on play and recess and that has worked out so much better for Elise. When we do our reading block she has the option to go to a reading center or have free centers where she just plays. Math has been outside the past few days since the weather is so nice. Elise can participate in math games while I work with Carter or she can just play. Some of our favorite online activities are online read alouds at storylineonline, Scholastic Learn at Home daily activities, the breakfast with certain animals live videos with quizzes and activities to go along with them from the St. Louis Aquarium, Lunch Doodles with Mo Willems, and Facebook Live with Ben Clanton (the author of Narwhal and Jelly books). Our zoo has also done weekly "zoo school" live videos and activities which the kids have loved. I am thinking of all of you and hope you are all doing well. Stay safe! 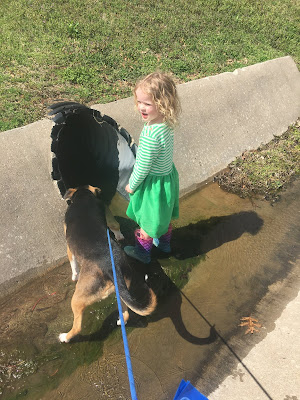 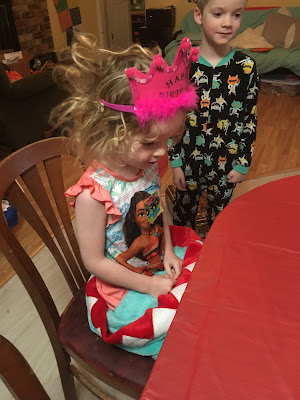 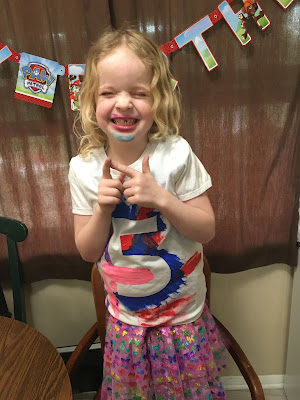 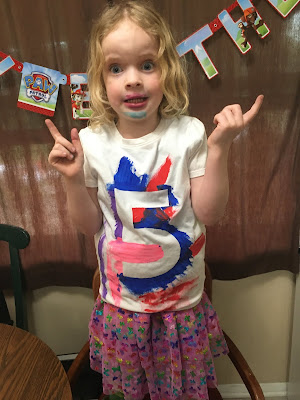 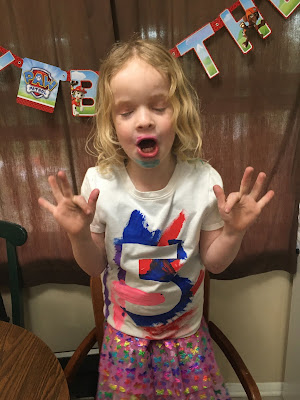 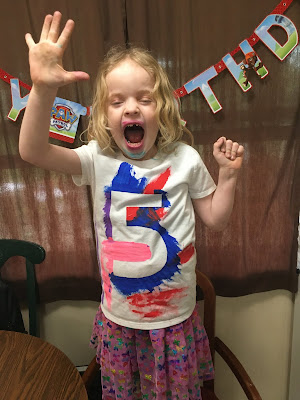 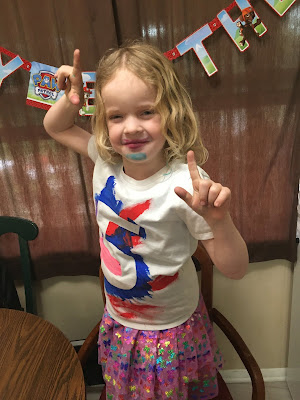 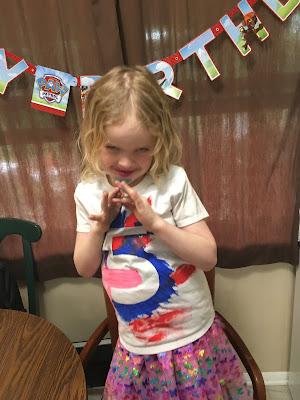 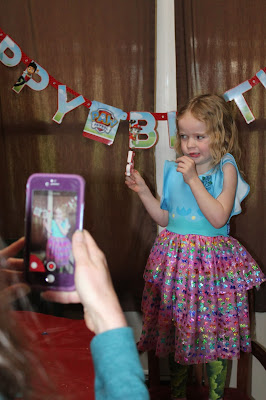 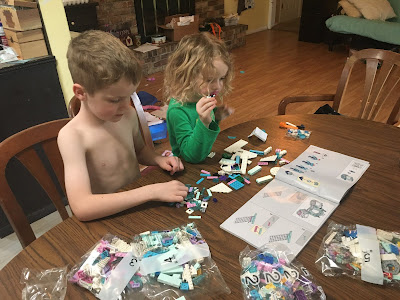 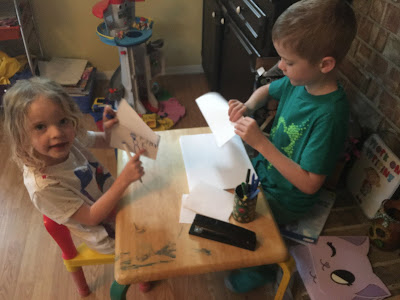 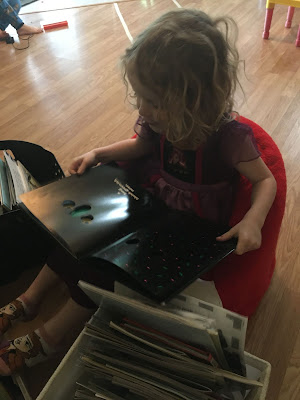 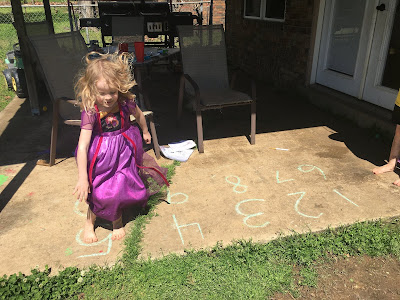 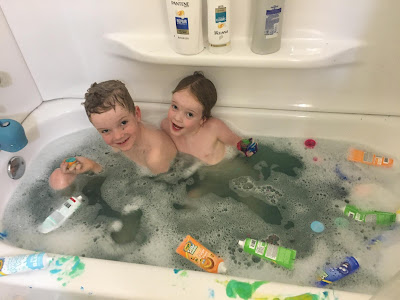 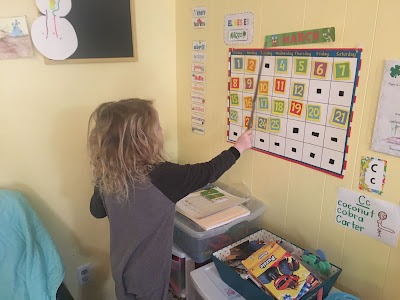 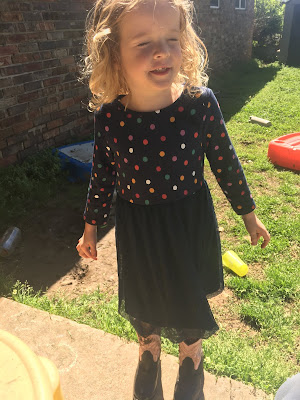 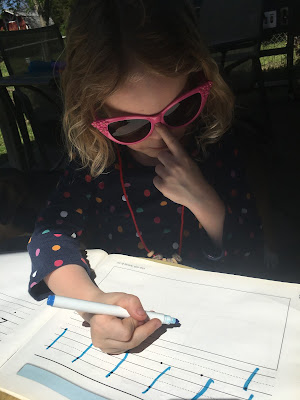 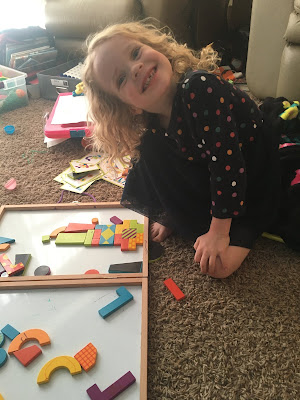 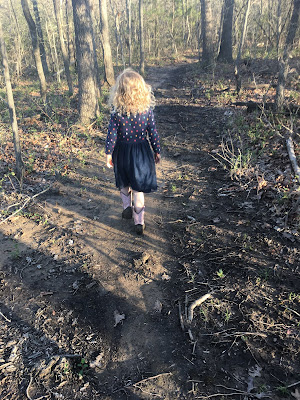