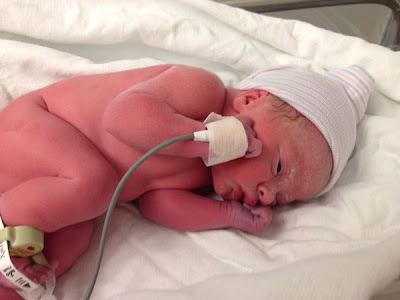 Carter’s story begins Friday morning, December 14th.  I woke up at 6:30 in the morning to go to the bathroom.  When I returned to bed I felt like I had “leaked” in the bed as I lay down.  I was so tired I figured I would just go to sleep and worry about it later.  Gross I know, but that’s how my tired pregnant brain was working.  Ty got up at 7:00 and got in the shower.  As I got out of bed a gush of liquid went running down my legs.  At that point I realized my water must have broken.  I went into the bathroom and told Ty my water broke.  He stuck his head out of the shower and looked at me, I still had liquid running down my legs, and agreed.  Then I said, “Well, maybe my water broke.  I don’t know.” and he responded with, “Yeah, maybe.”

I was unsure of what to do so I asked Ty to call the doctor’s office.  I then called my co-teacher so we could get a substitute set up and I also called my parents.  When Ty got out of the shower he called the doctor’s office.  They said they’d have the doctor on call give him a call back.  He then began to pack our hospital bag which I had been planning to pack that coming weekend.  He was looking at a list of items I had typed up from information I found online.  We realized there were items on the list that we hadn’t had the chance to buy yet.  While Ty packed the bag I got ready for the day, still thinking I might be able to go to school for a half day before going to the hospital.   I wasn’t having any contractions so I was thinking maybe it wasn’t the real deal.

Harper and Halle were following me around and Harper kept getting in my lap.  She wanted to be right up in my face.  We finished packing and Ty loaded the car.  We were still waiting for the doctor on call to call us back.  We both sat down to eat breakfast and Ty called the doctor’s office again.  It turned out they had written down the call back number wrong and that’s why we didn’t get a call.  The nurse told us we needed to go to the hospital.  There were a few pictures I’d wanted to take and we hadn’t yet, so Ty took a few pictures of my belly and then off we went. 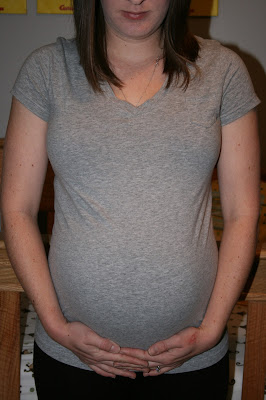 I had one contraction that was really strong and I just had to stand up.  Ty was on one side of the bed and my IV cart was on the other.  I popped up and stood on the bed.  As I was standing I asked if it was okay if I stood.  The look on the nurse’s face said it was not okay, but she just said whatever it takes to not push.  So I was standing on the bed with the nurse holding one hand and Ty holding the other.  Mom and dad looked at each other and realized we were getting close to baby’s arrival, so they asked Ty if they should go out to the waiting room.  Dad said me standing on the bed was shocking and funny at the same time.  I’m sure the nurse hadn’t experienced that before!

Mom and dad left the room a little after 5:50 and figured Carter would be born within 20 minutes.  They were shocked when they heard his arrival time!  They spent the next few minutes in the waiting room with Ty's parents who arrived in record time just moments before Carter was born and my brother, Thomas, who arrived shortly after.

The nurse called in a couple other doctors just in case Dr. N didn’t make it in time.  She checked in with him and he was at the corner, but stuck in traffic.  He told the nurse that if I had to push, go ahead and let me push and not make me wait any more.  At this point I was desperate to push.  The doctor they had called in for Dr. N was getting ready.  The nurse told me that on the next contraction I could push.

The next contraction came and I started to push right as Dr. N walked in and got ready.  The other doctor stepped back and Dr. N got in position.  I pushed and felt Carter’s head start to emerge.  I pushed again and then felt Carter’s head come the rest of the way out.  Dr. N looked at the nurse next to him and said “I love delivering runner’s babies.”  I couldn’t believe how quickly everything was going.  Once I got to 6 cm I felt like everything went by in fast forward.  Dr. N told me to push again, but not as hard.  I felt like I didn’t push as hard but Carter went flying out and Dr. N said, “Boy, you got pushy!”   It made me think of a joke my dad would make!  Ty cut Carter’s umbilical cord and they pulled open my gown and put Carter directly onto my chest.  It was so amazing sitting there holding him.  I didn’t want them to take him away!  It was surreal feeling his skin against my skin.  He was born at 5:58, weighed in at 6 pounds, 3 ounces and measured 19 and a half inches long. 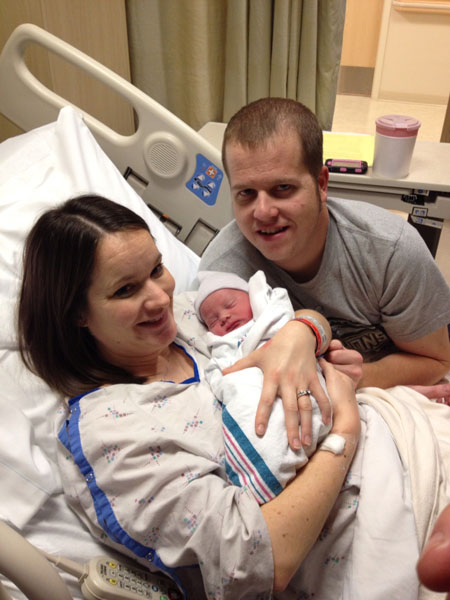 Posted by Liz Runningmomma at 11:34 AM

Email ThisBlogThis!Share to TwitterShare to FacebookShare to Pinterest
Labels: pregnancy