It felt weird writing this post from my perspective. I felt like it made it too much about me and not enough about Jeremy but then I realized my experience is the only one I can write about. So here we are, me writing about my experience at Jeremy's Survival Run. A little over a year since his accident where he broke his femur, pelvis, and skull and suffered a very serious traumatic brain injury. His chances of survival looked bleak in the first few days (and even weeks, to be honest) and his chance at a full or near full recovery were pretty much non-existent but here he is having made nearly a full recovery in the months since his accident. Read more about Jeremy's accident here, my first run after his accident here, when we nearly lost him here, and to read the updates on his progress through those first months check any posts from January-March 2016.
The week before Jeremy's Survival run it seemed like spring with daily highs reaching even into the 80's! Friday night the weather was predicting around 32 degrees for race morning which was going to be a shock for everyone who had been getting used to the spring-like weather! Saturday morning as I prepared to head out to the race site to mark the course I checked the weather and it was even colder than predicted, 25 degrees and felt like 17! I had to change out my clothes I had laid out the night before to clothes for colder weather. My plan was to run the course to mark it with chalk and then run out a little more to finish out 4 miles for the day. That way I could be at the finish line to cheer people on. Although it was pretty chilly the sun was out and the wind was very minimal. It was absolutely perfect running weather. I had woken up before my alarm feeling so joyful and excited for the race and the sunshine was only adding to my happiness. I kept thinking about how the whole event was so remarkable! A year ago we felt somewhat foolish hoping that Jeremy might be running again someday. Now not only is Jeremy running again, he's running fast and long!

I took off to run the course armed with sidewalk chalk in my pocket. I had so much fun writing encouraging messages, marking the miles, and outlining the route with arrows. A few people out using the trails asked me what race I was getting ready for so I got to share with them the great news of Jeremy's recovery. When I made it back to the starting area mom, dad, and Ty had arrived with the kids along with some other family and friends. We got the finish line area set up and then I talked to a few people who were already there. One of my friends whose kids I had in class a few years ago was shocked when I told her I wasn't running the race. She declared that I must run it and that she would man the finish line with my dad (who has a stress reaction in his shin, boo to injuries!). I was so excited to get to run the race but ran the idea past Ty and my dad to make sure they felt it would work out. Ty pointed out that I probably wouldn't miss many people finish anyway and I realized he was right. Elise was miserably cold because her gloves kept falling off and was crying so we decided I would run with her in the stroller with the weather shield on. Ty got her ready for me and then headed over to the turn around point to set up the water stop.
As we gathered at the starting line Carter announced that he wanted to run so I had him come over by me. I gave some information about the course and dad introduced everyone to some people who played big roles in Jeremy's recovery and then we were off. In honor of Jeremy's classmate, Dylan Meier, who died in a hiking accident we started the race by saying "Get Busy Livin" rather than ready, set, go. I had planned to get a video of the race start but forgot since I was worried about making sure Carter stayed with me to start. We said "Get busy livin!" again after the race to capture it. Carter was so excited and took off running wonderfully. He made it out about 1/10th of a mile and decided he was done so we turned around and I ran him back to his Opa and then headed back out onto the course. It was fun cheering for everyone as I went by. Then on the way back I took pictures as I ran along. It was especially neat to see Jeremy out toward the front of the race. I wanted everyone at the race to feel like winners for coming out on a cold day and for celebrating and supporting Jeremy through his entire recovery so I brought streamers to stretch across the finish line. Everyone got to "break the tape" which I've always felt, no matter how bad or tough of a race you have, is a wonderful feeling. It seemed like everyone enjoyed that and Carter really liked holding the streamers too! 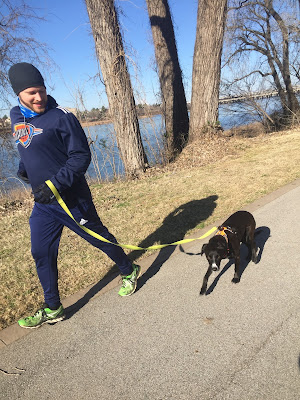 After the race I got the chance to speak to the man who was on the scene when Jeremy got hit. He was driving behind the truck whose trailer hit Jeremy and stopped to help. He held Jeremy and willed him to live, talking him through all of it. I was so glad I got the chance to thank him for being there for Jeremy in a way we wish we could have but were not able to be. Hearing the story from him brought goosebumps to my arms and tears to my eyes. He said he was in the army and had a fellow soldier die in his arms. When he was holding Jeremy he told himself, not again, this man will not die in my arms. He yelled at Jeremy to come back, to fight, even after a doctor on the scene had pronounced Jeremy dead. He said Jeremy showed his fighter spirit when he not only came back but attempted to stand up! My heart will forever love that man and what he did for our family, going against the directions of the 9-1-1 dispatcher who told him to roll Jeremy over onto his back as he knew Jeremy would drown on his own blood if he did so. I feel deep in my heart that he was perfectly suited to be the person to help Jeremy that day and I am eternally grateful for the angel on earth he was for Jeremy that day. Today and every day I am thankful for Jeremy's life, Jeremy's ability to walk, ability to run, and my ability to do those things as well. I am so glad we have the opportunity to keep moving forward together and Saturday was a wonderful celebration of that!