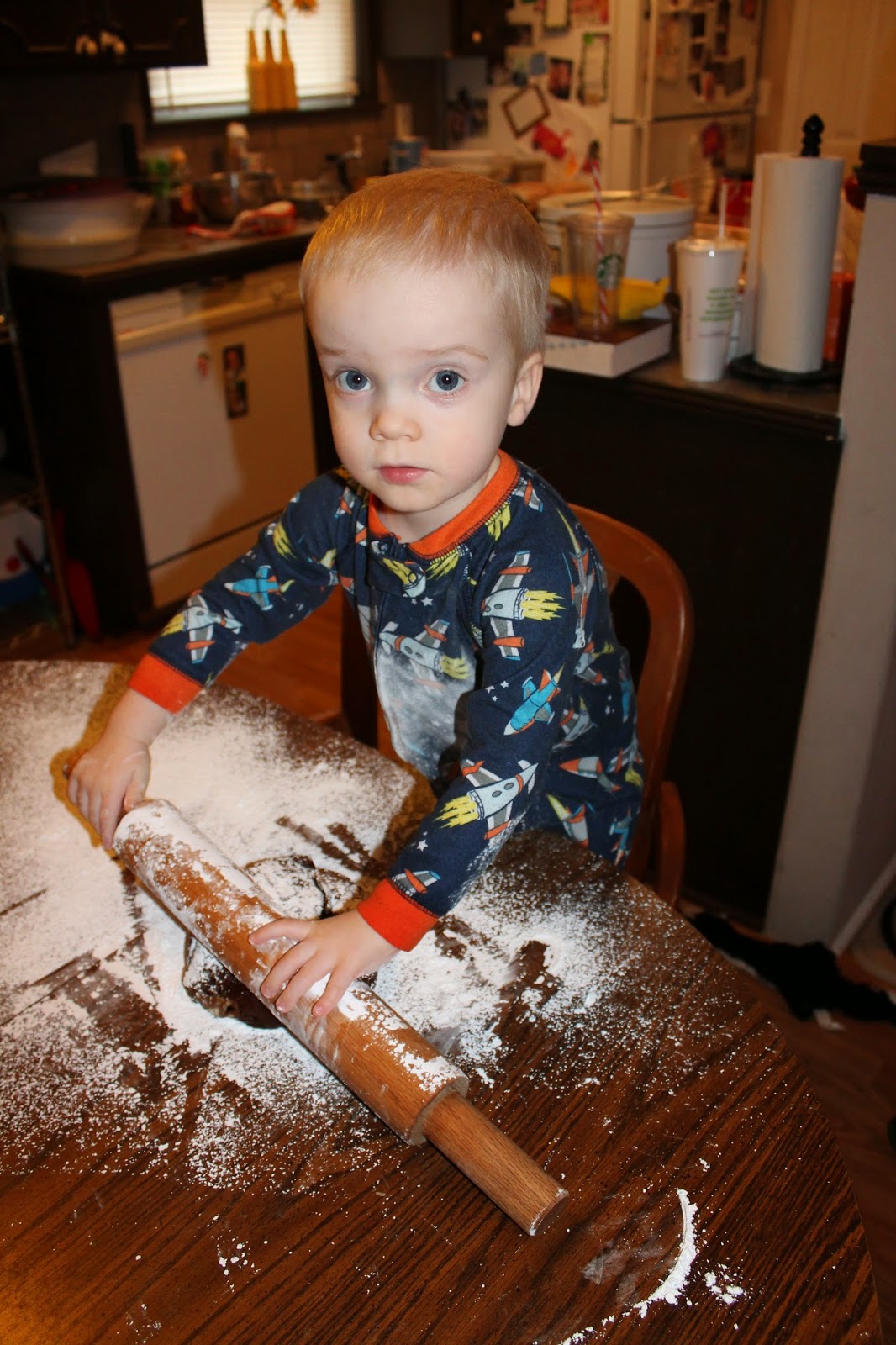 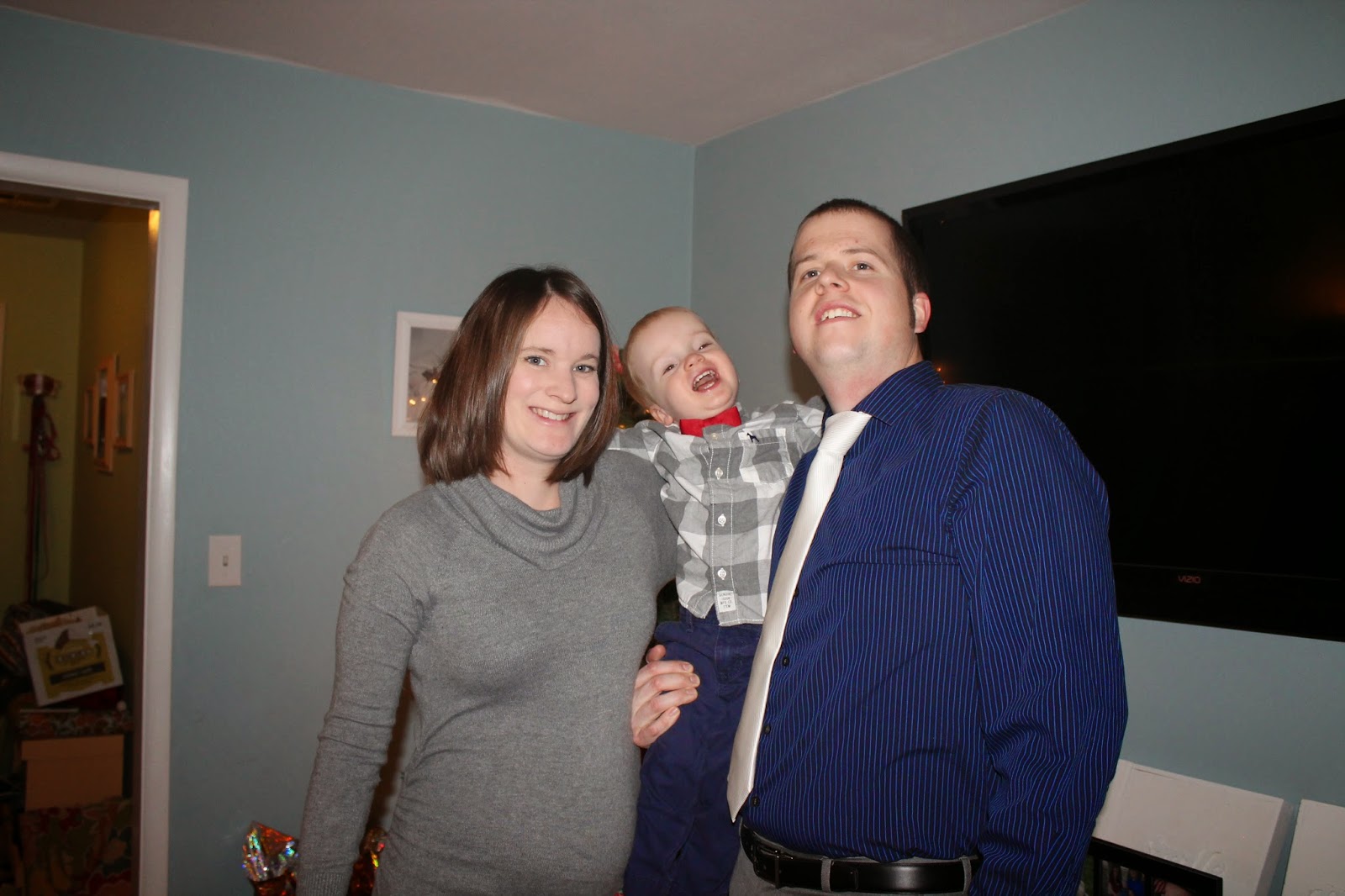 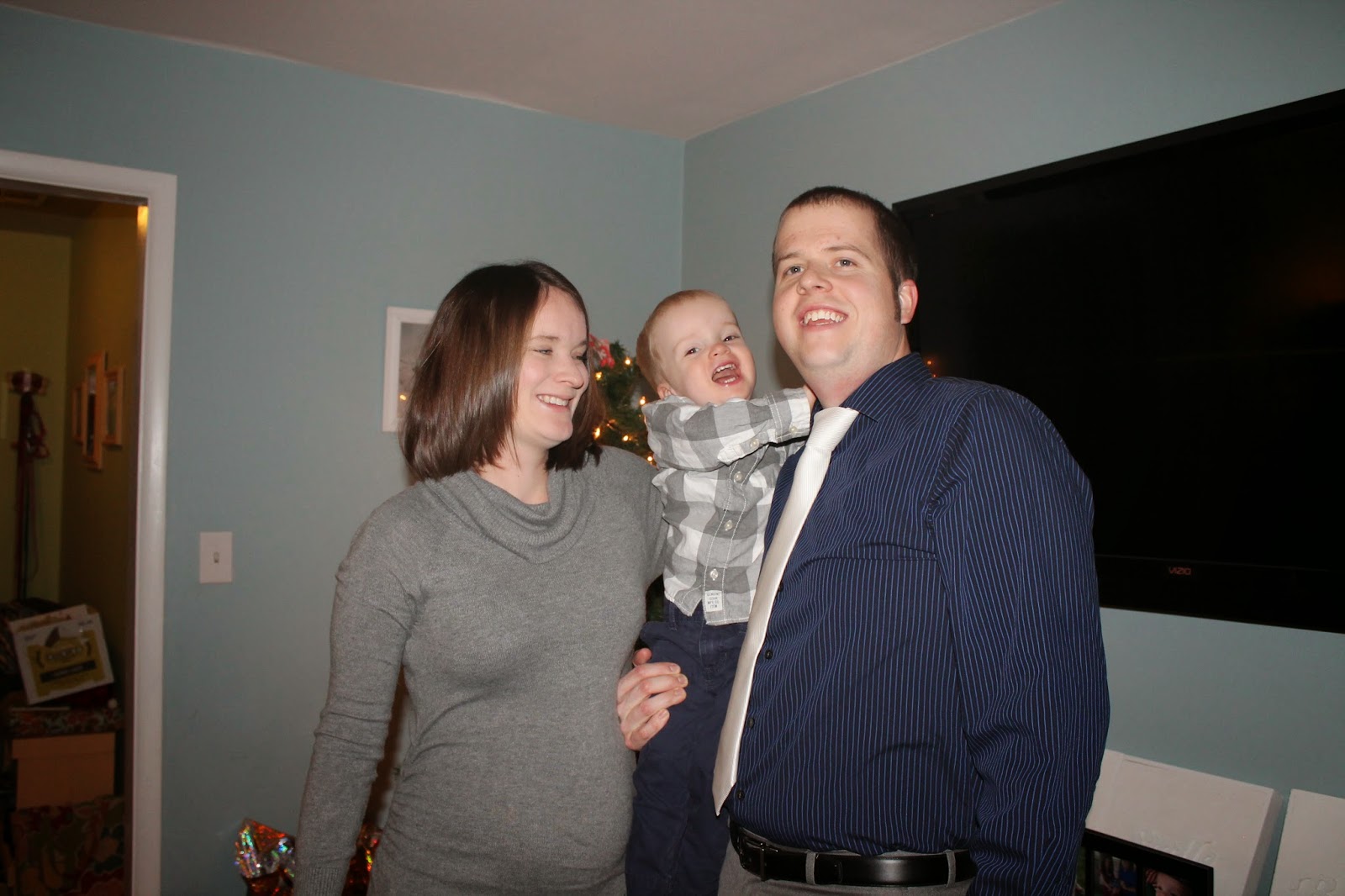 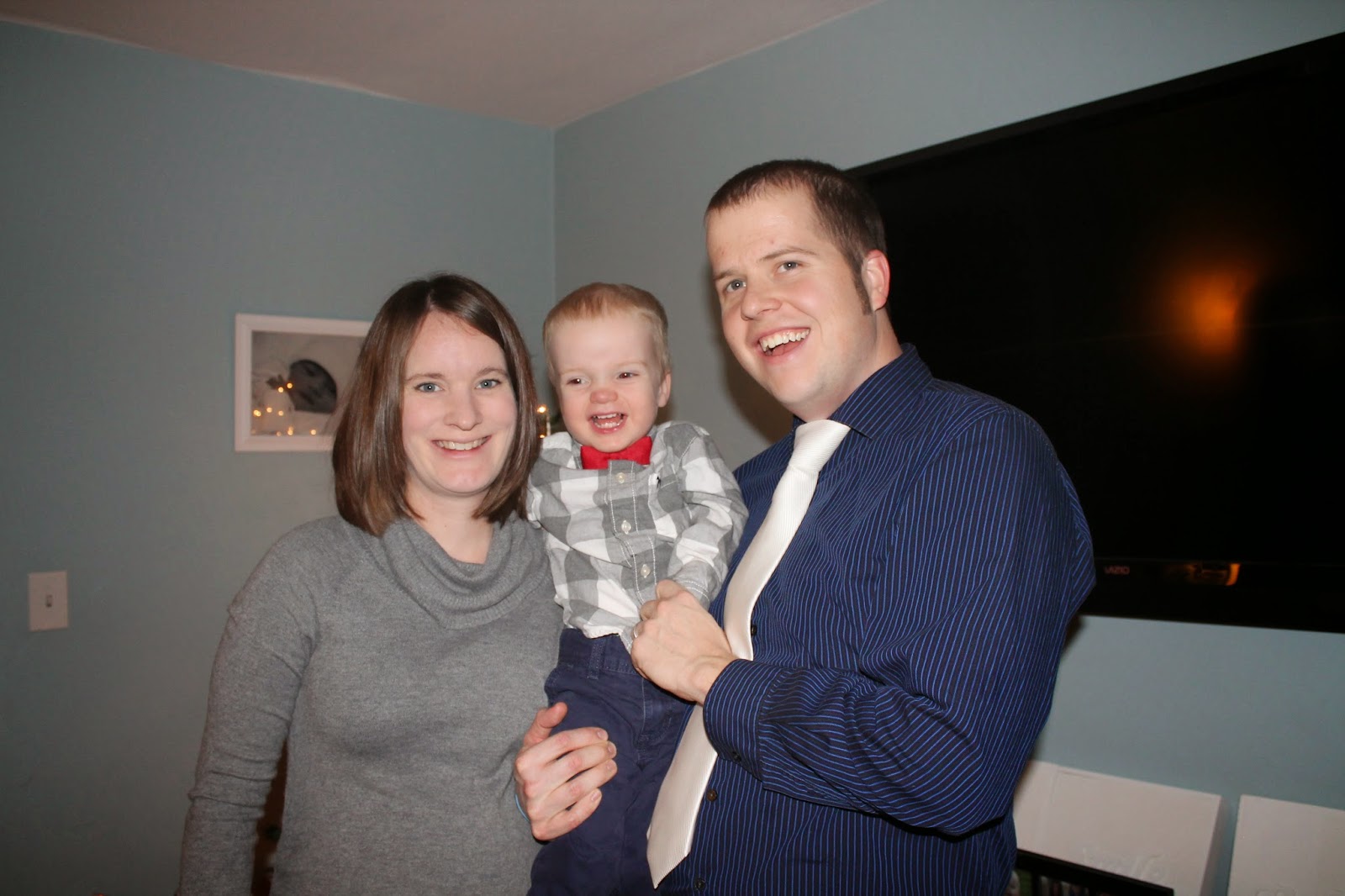 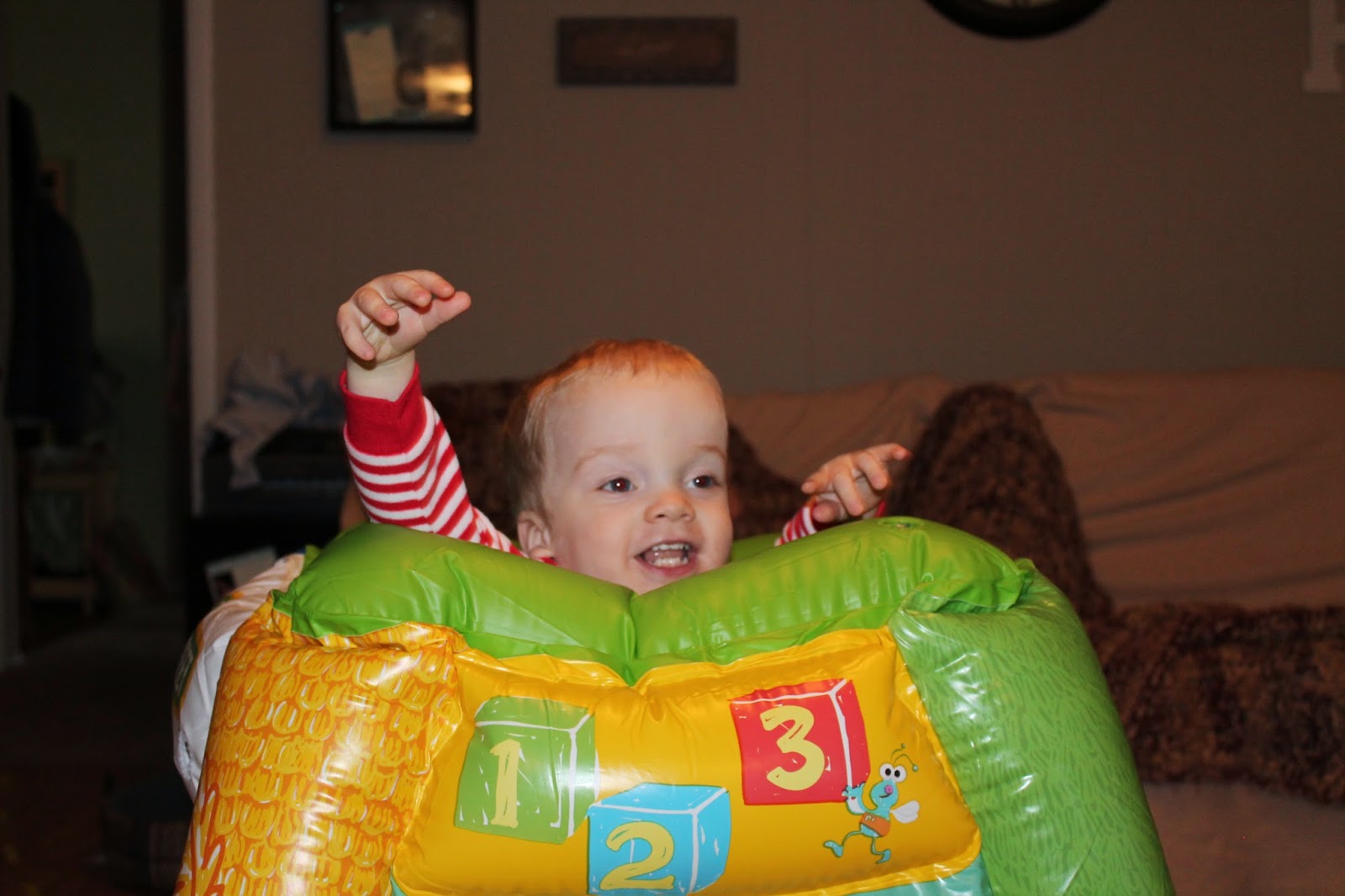 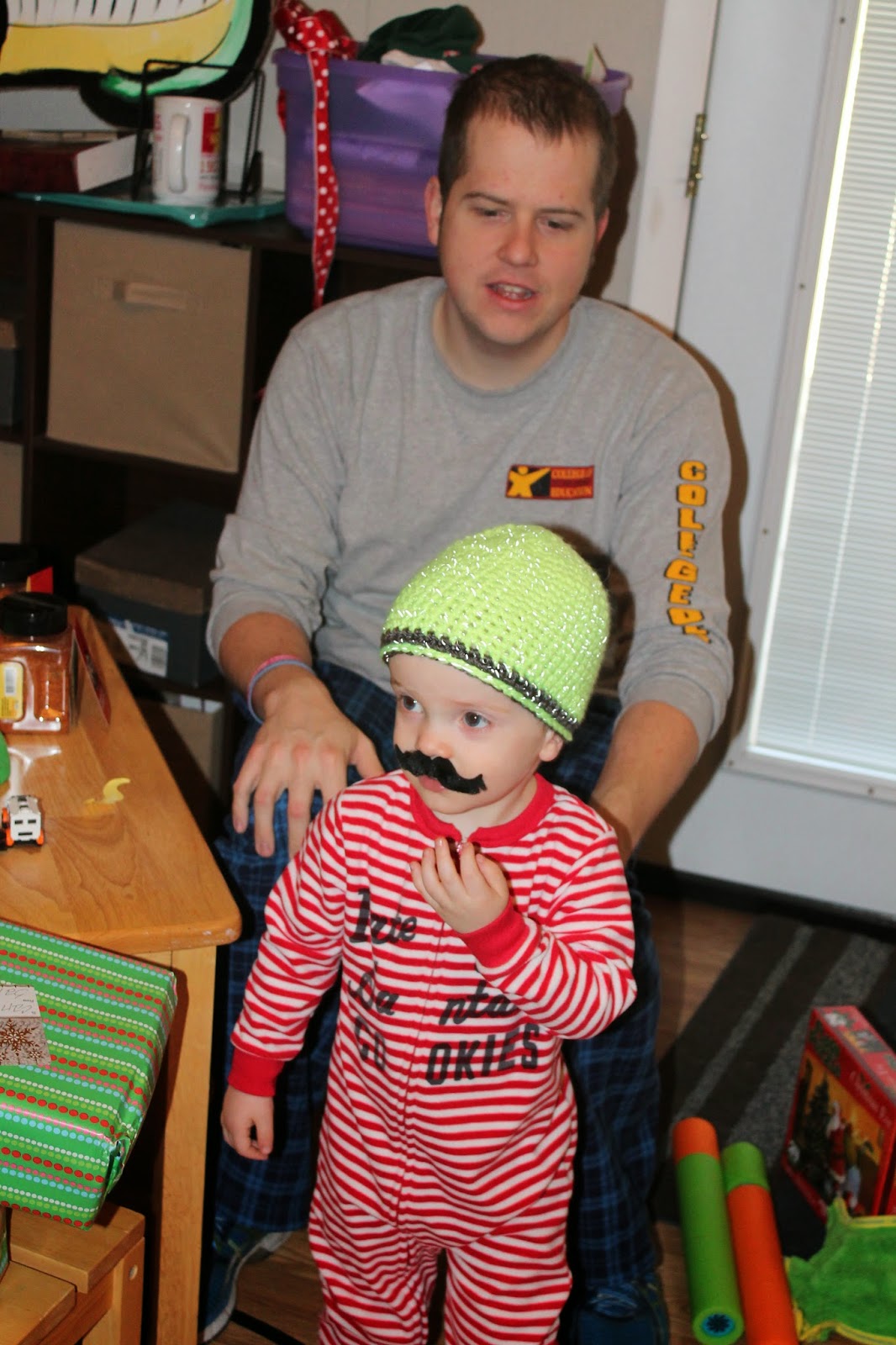 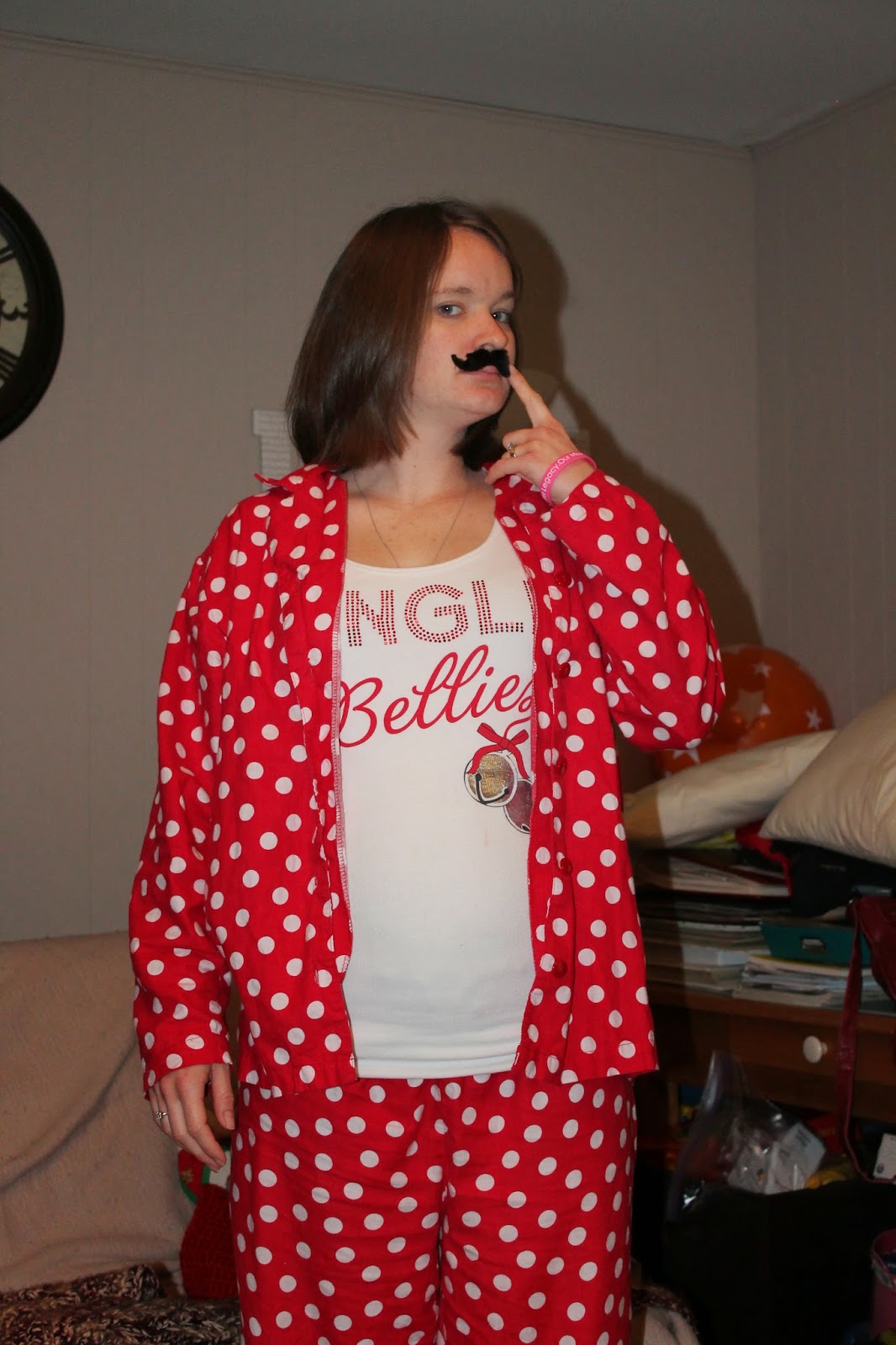 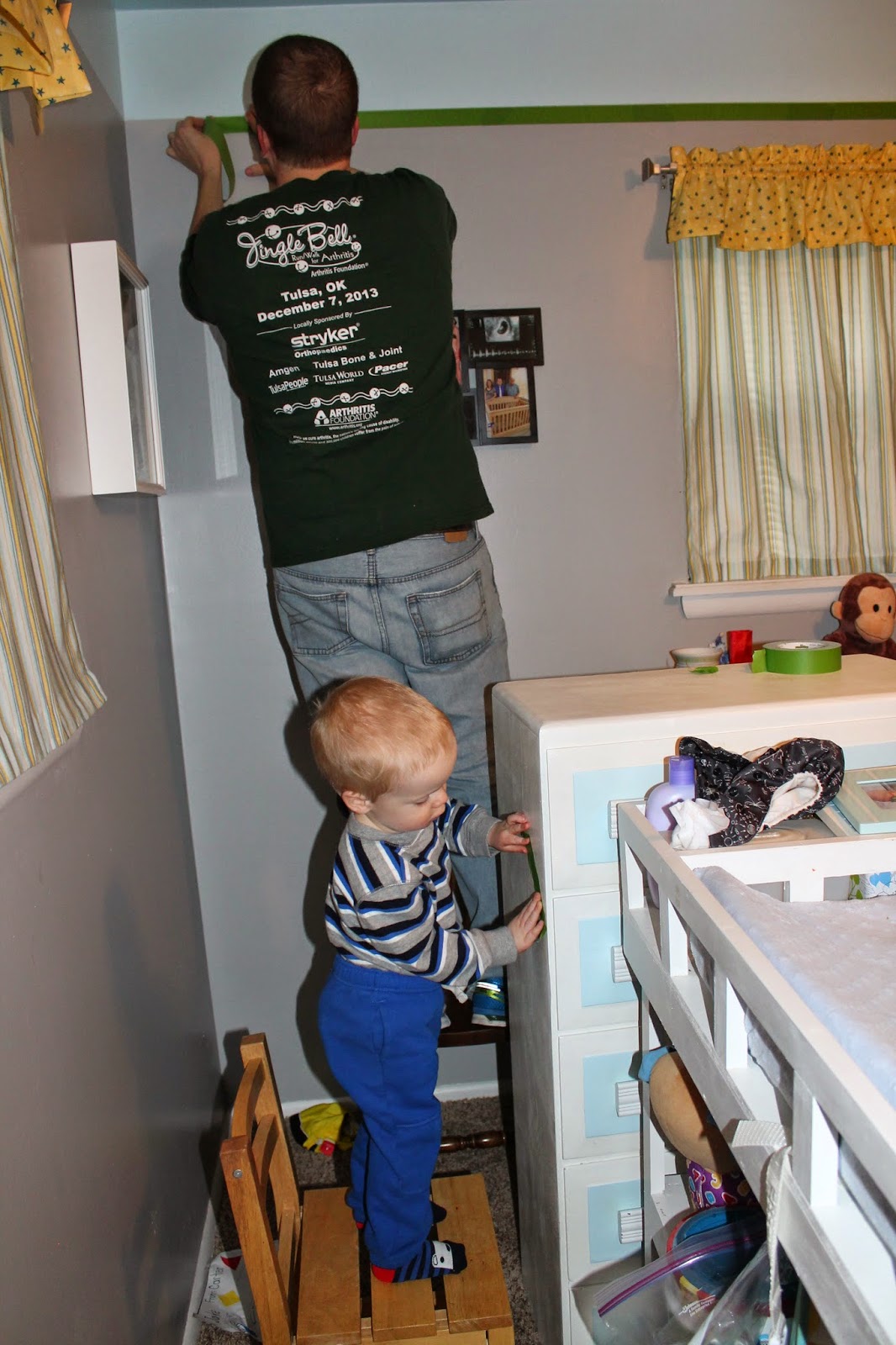 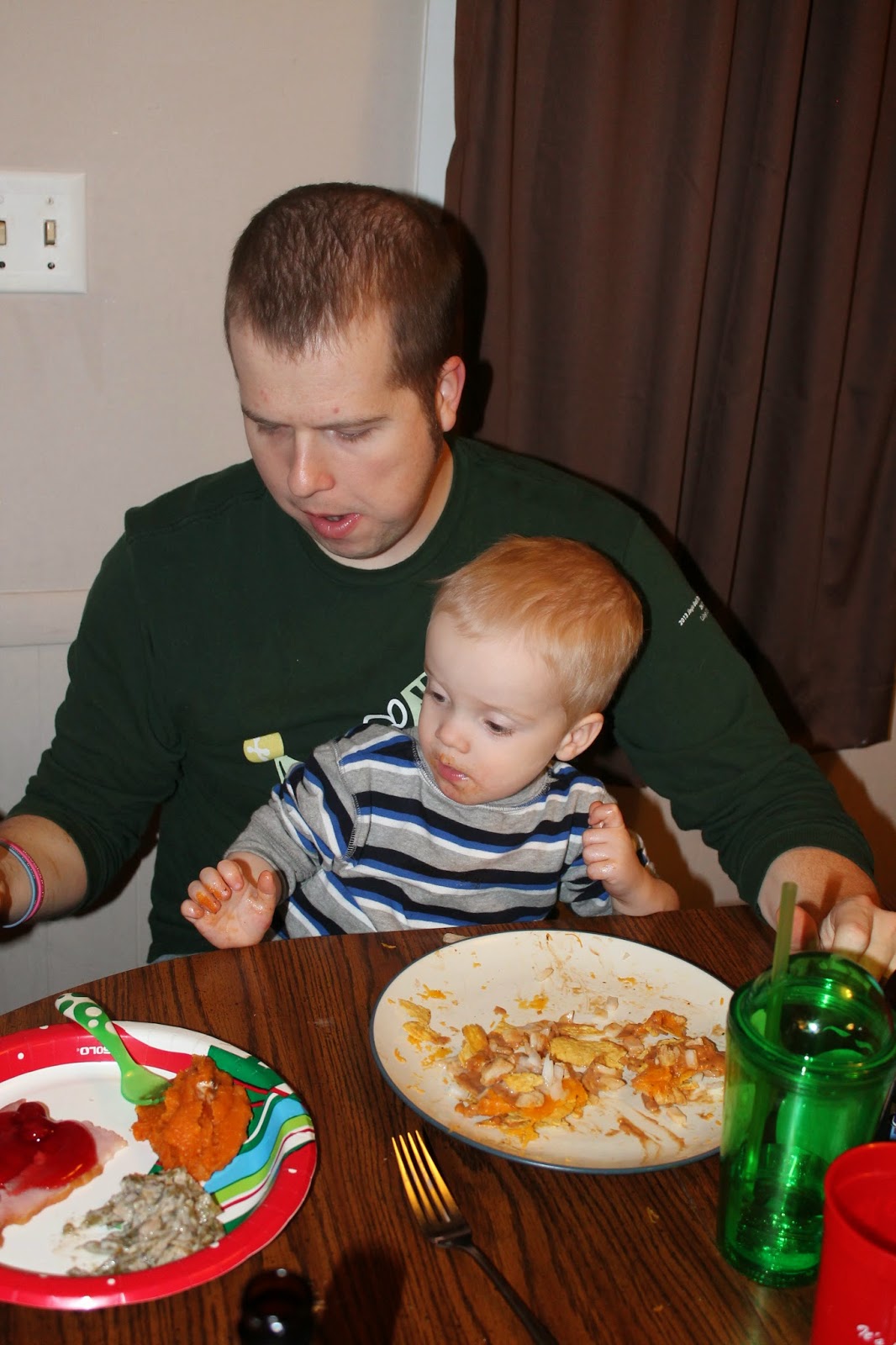 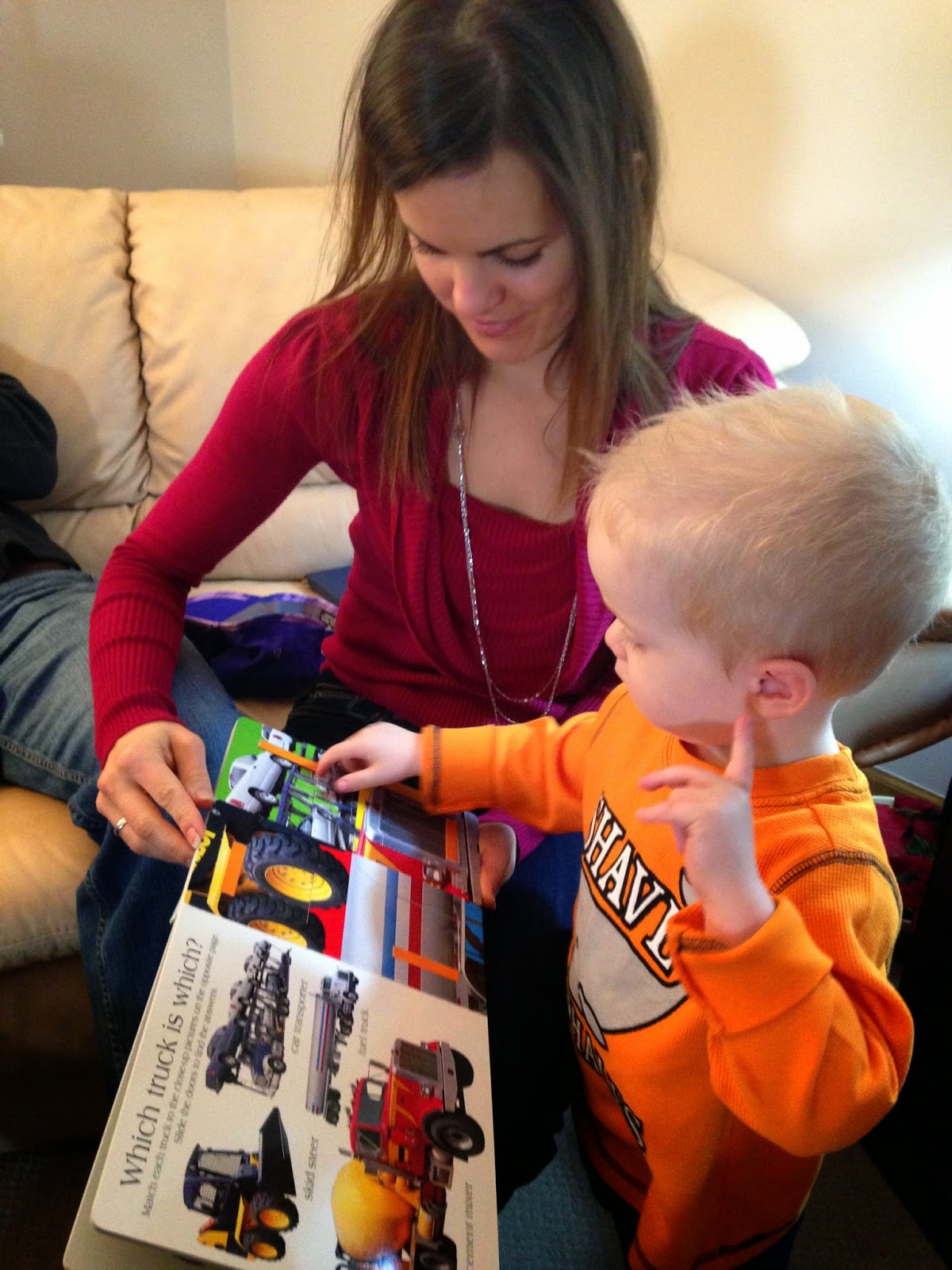 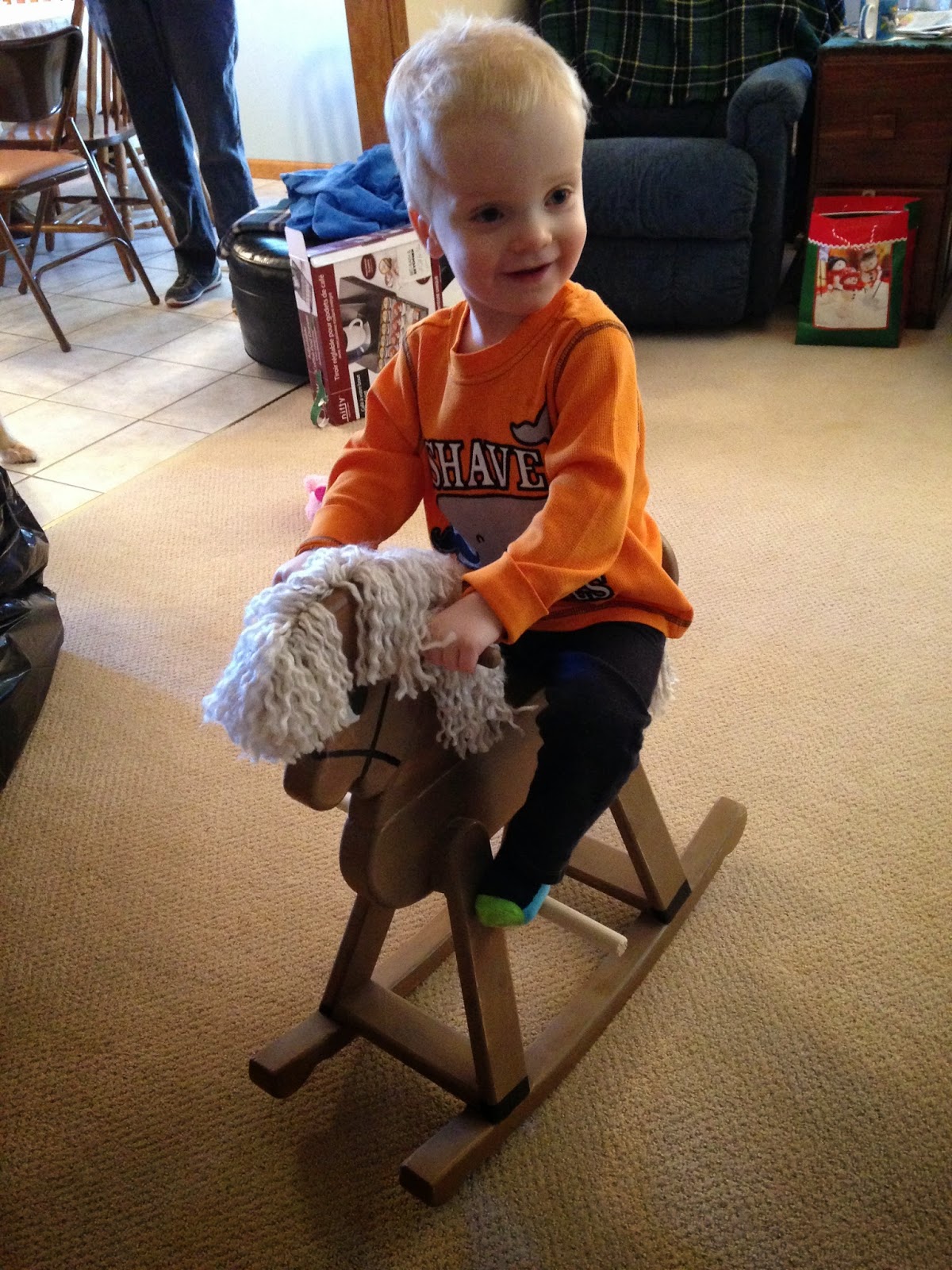 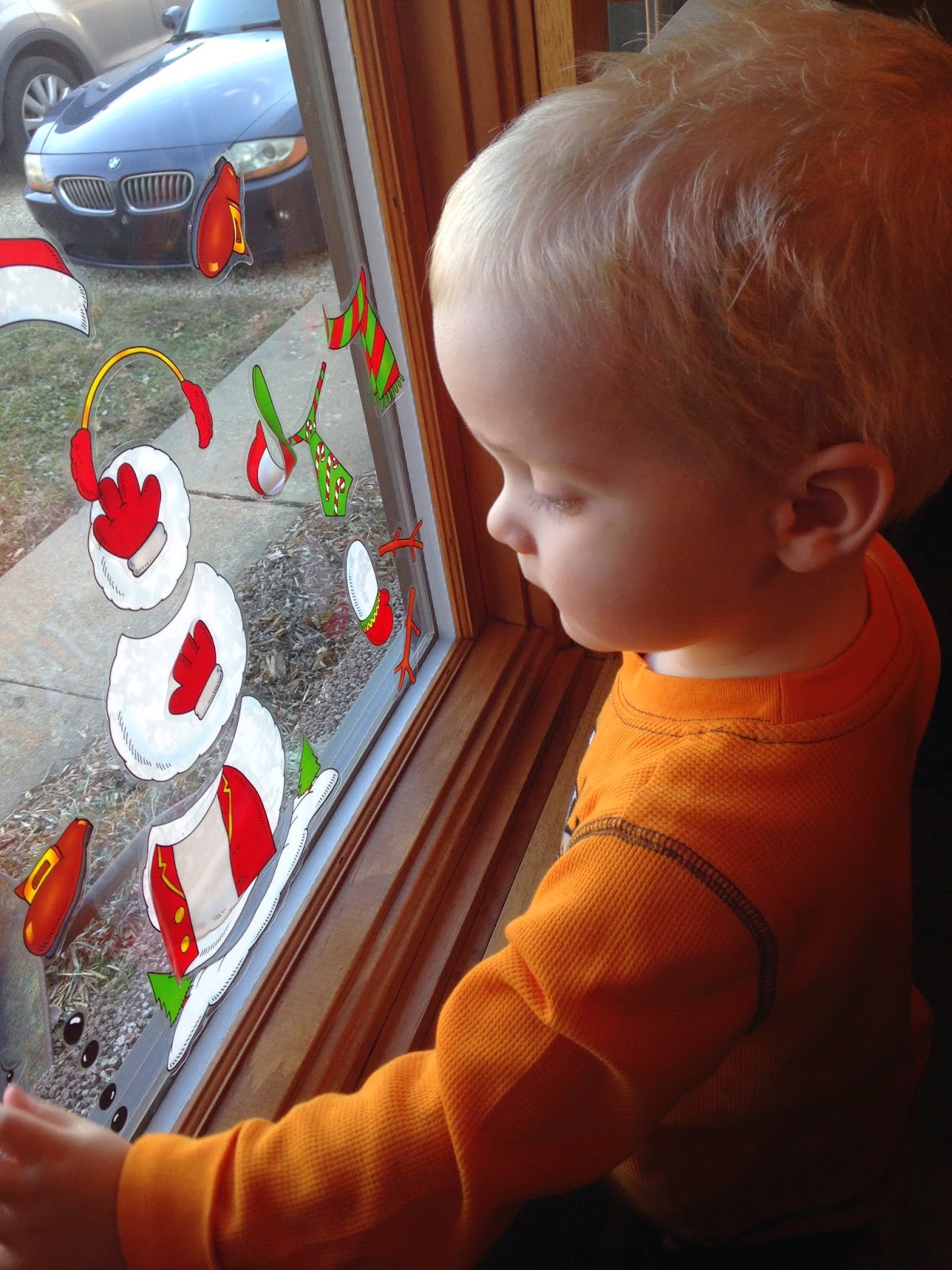 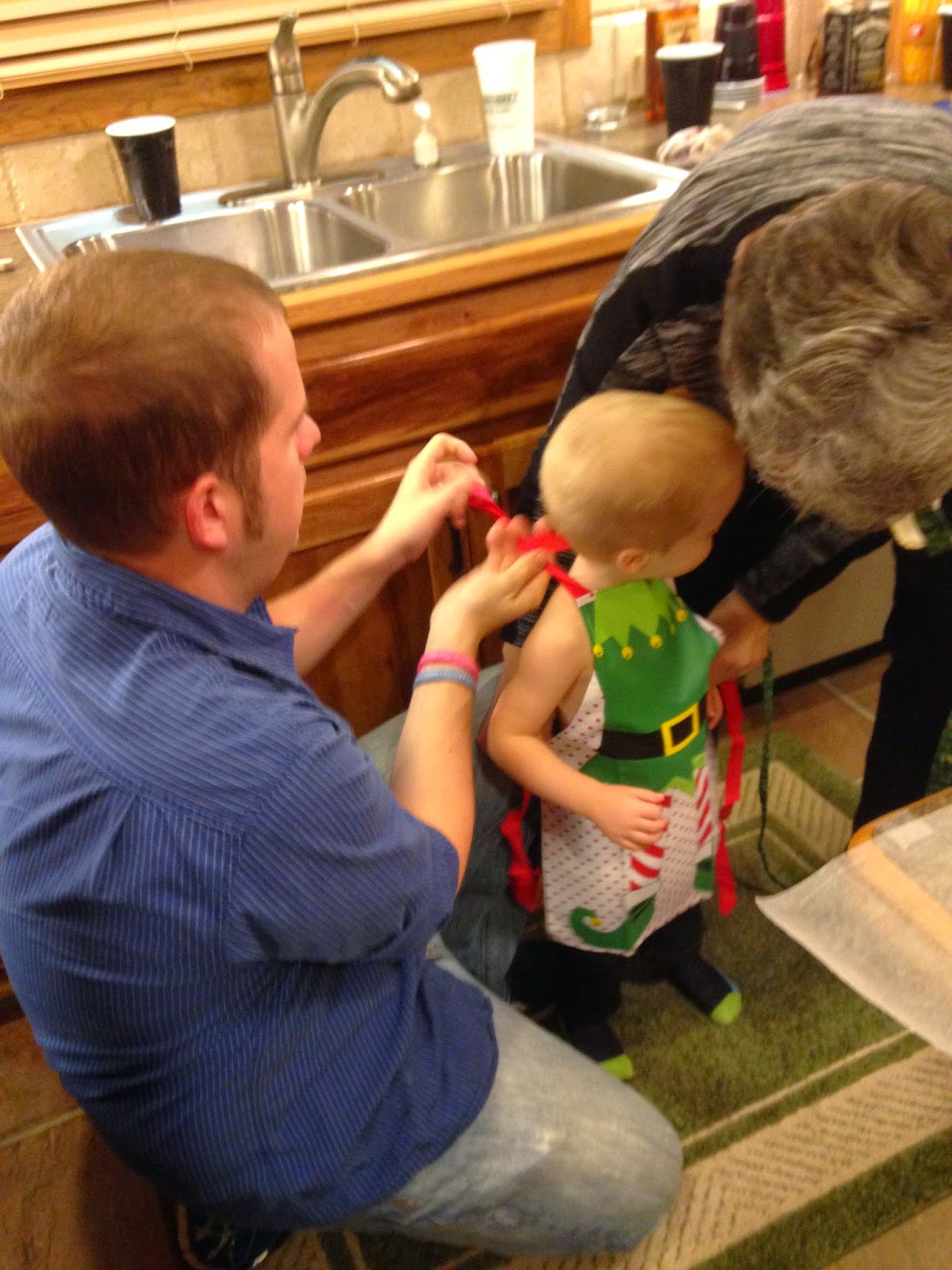 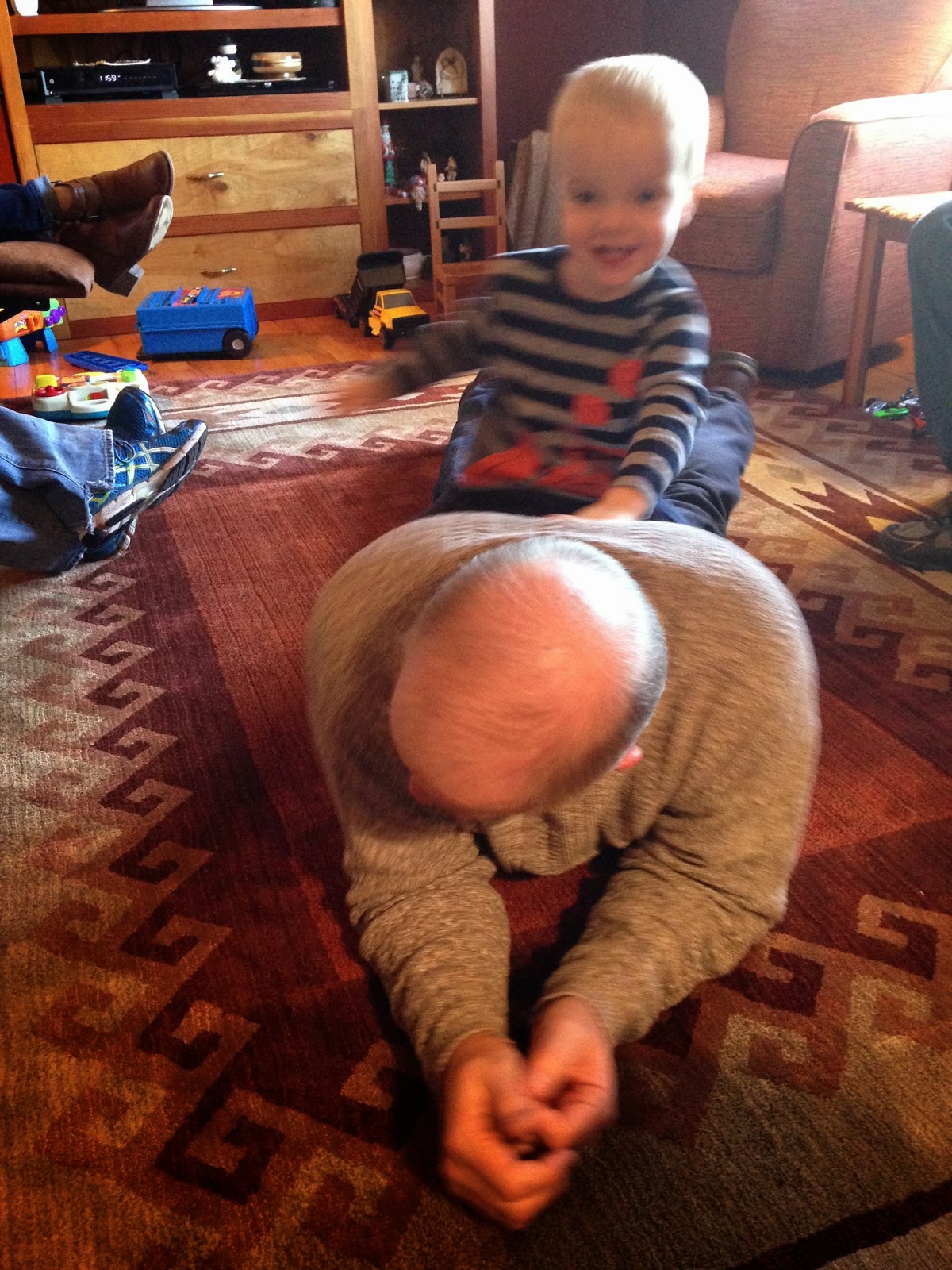 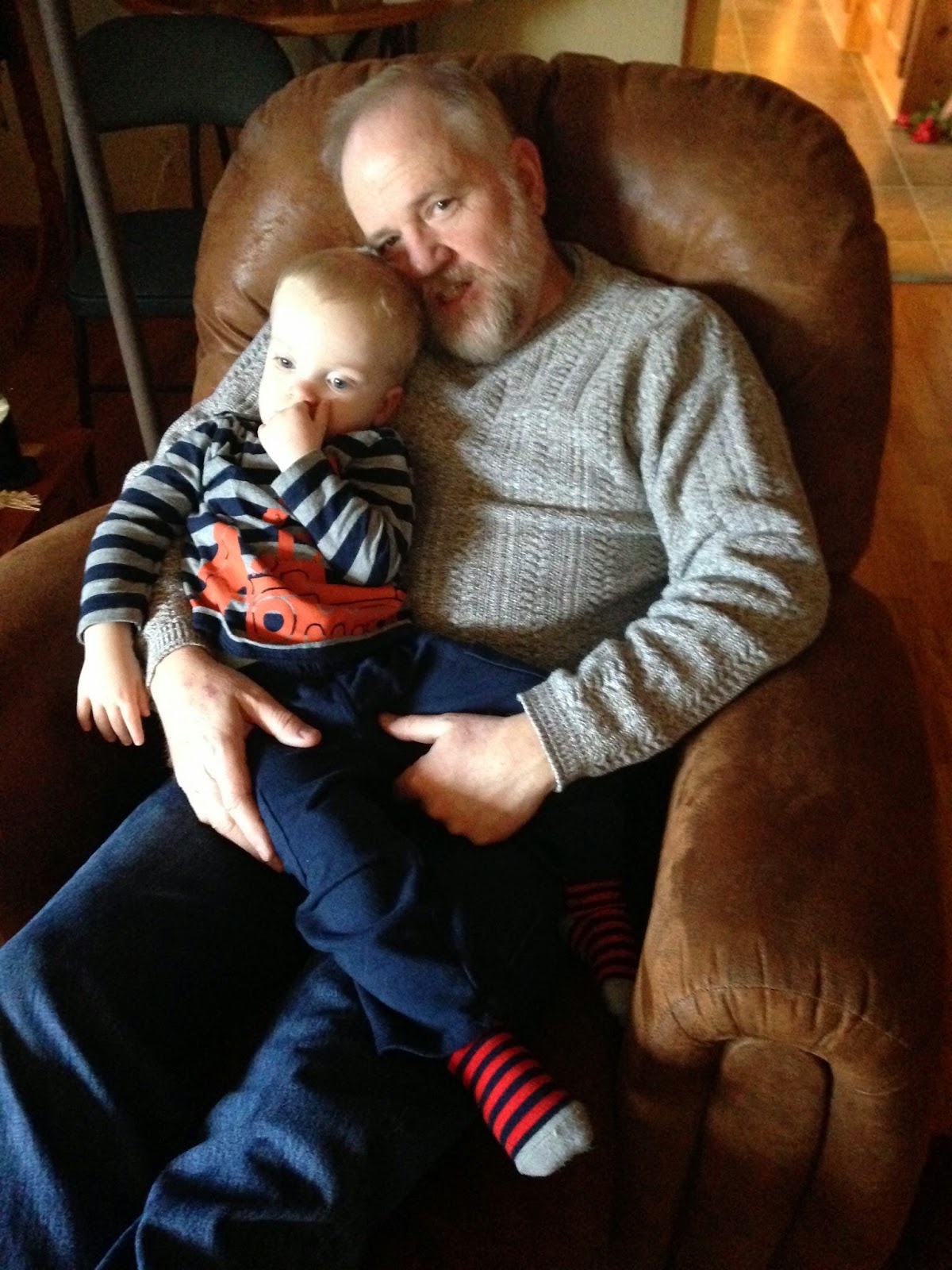 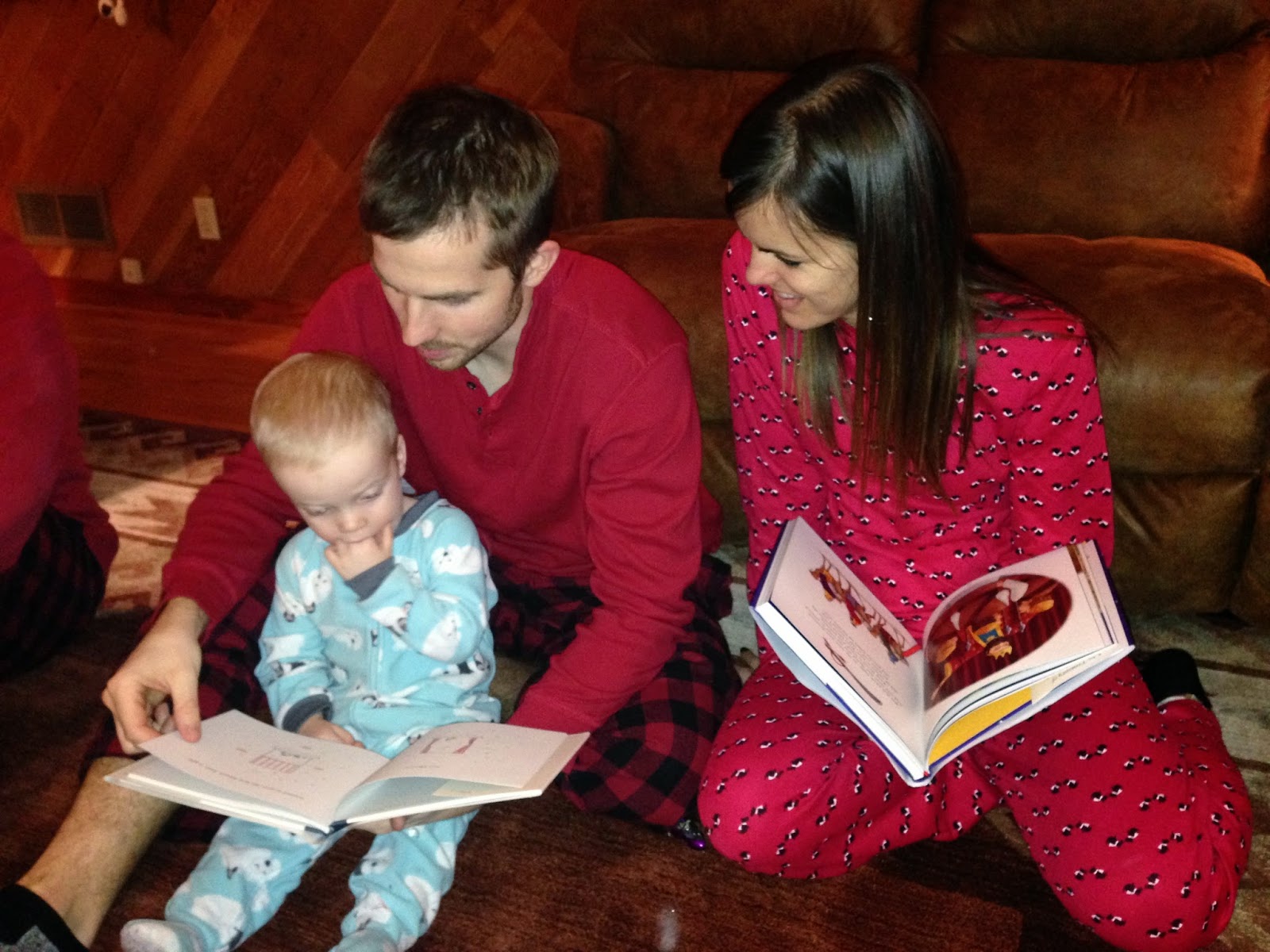 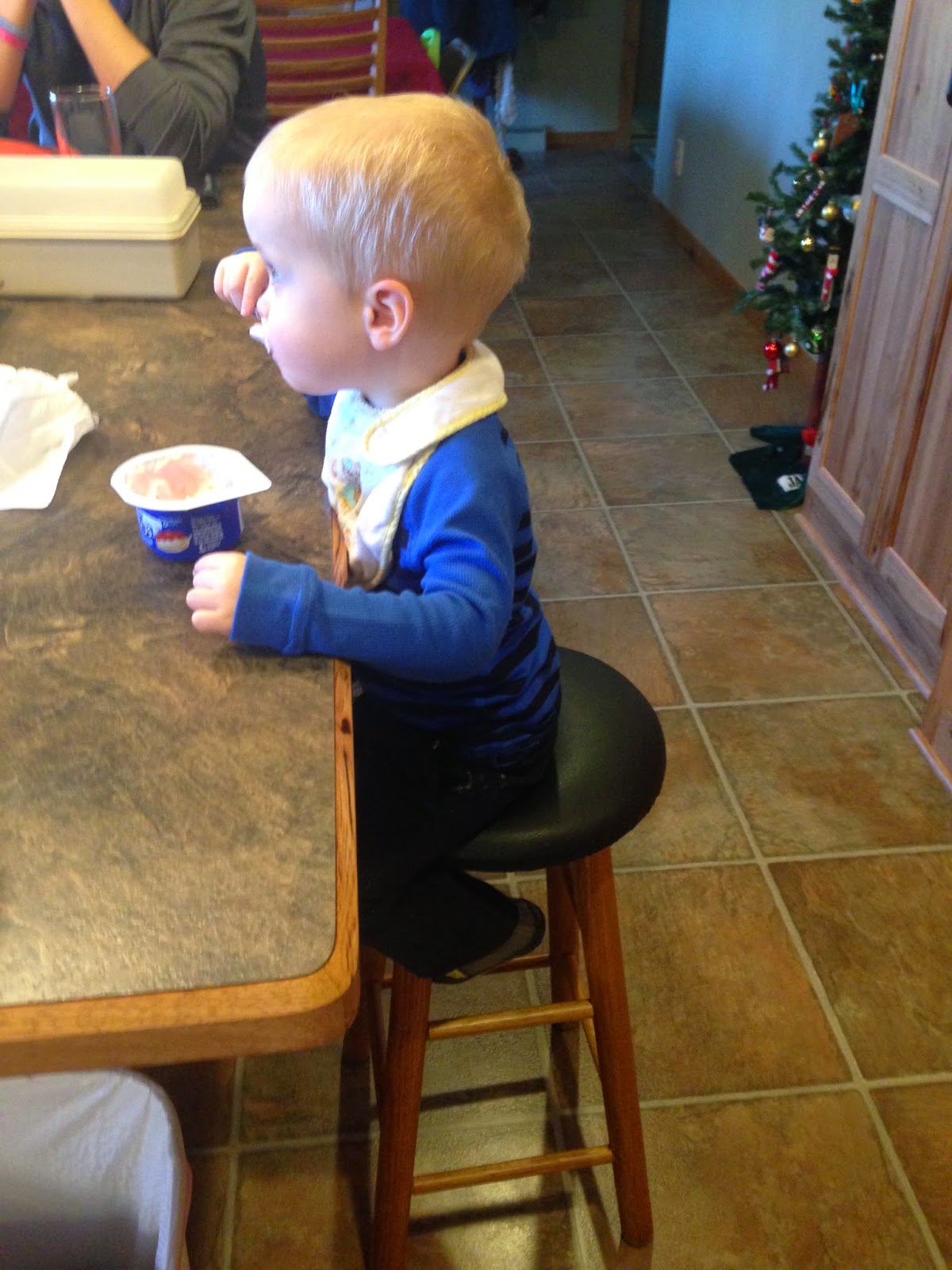 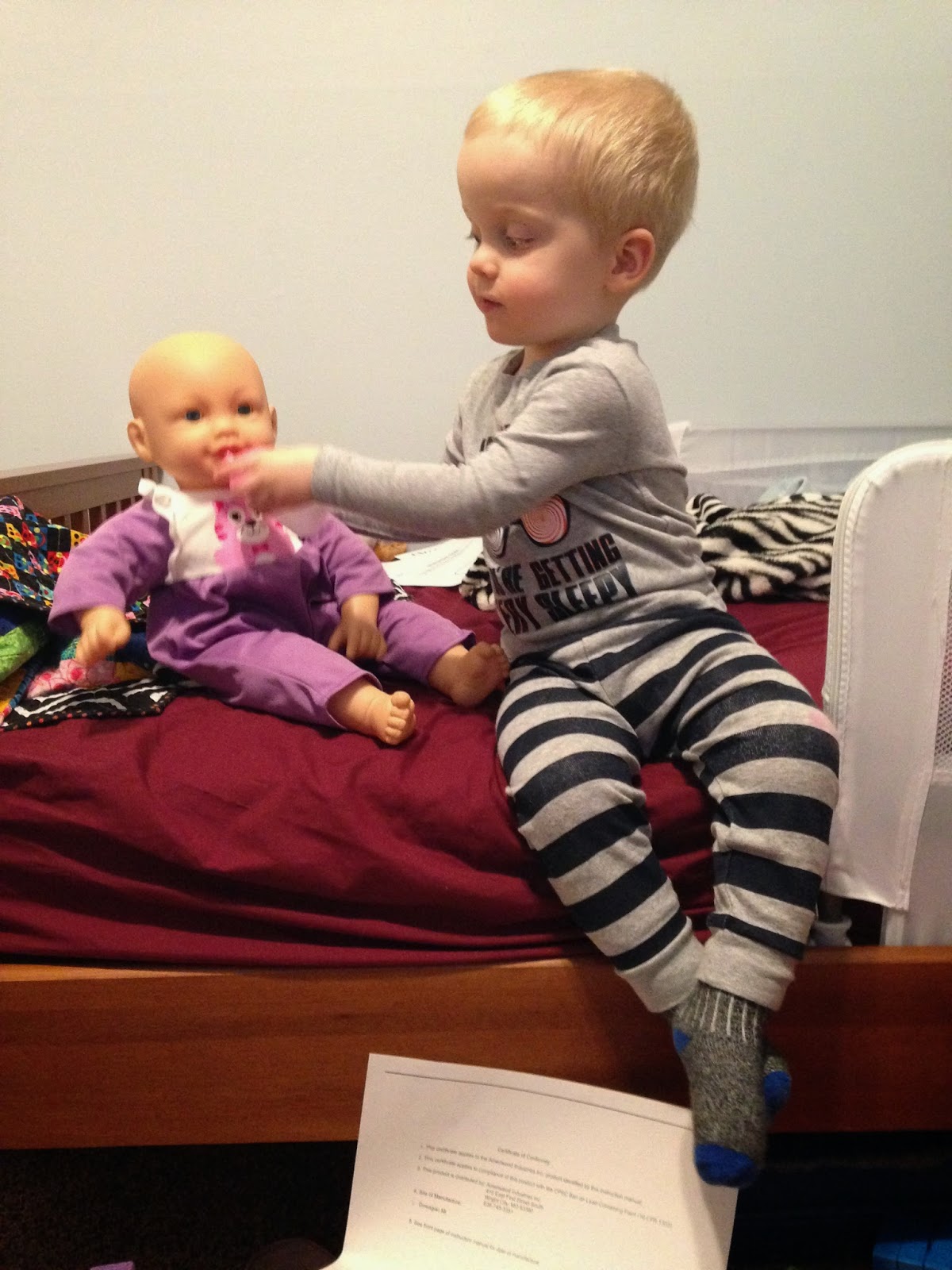 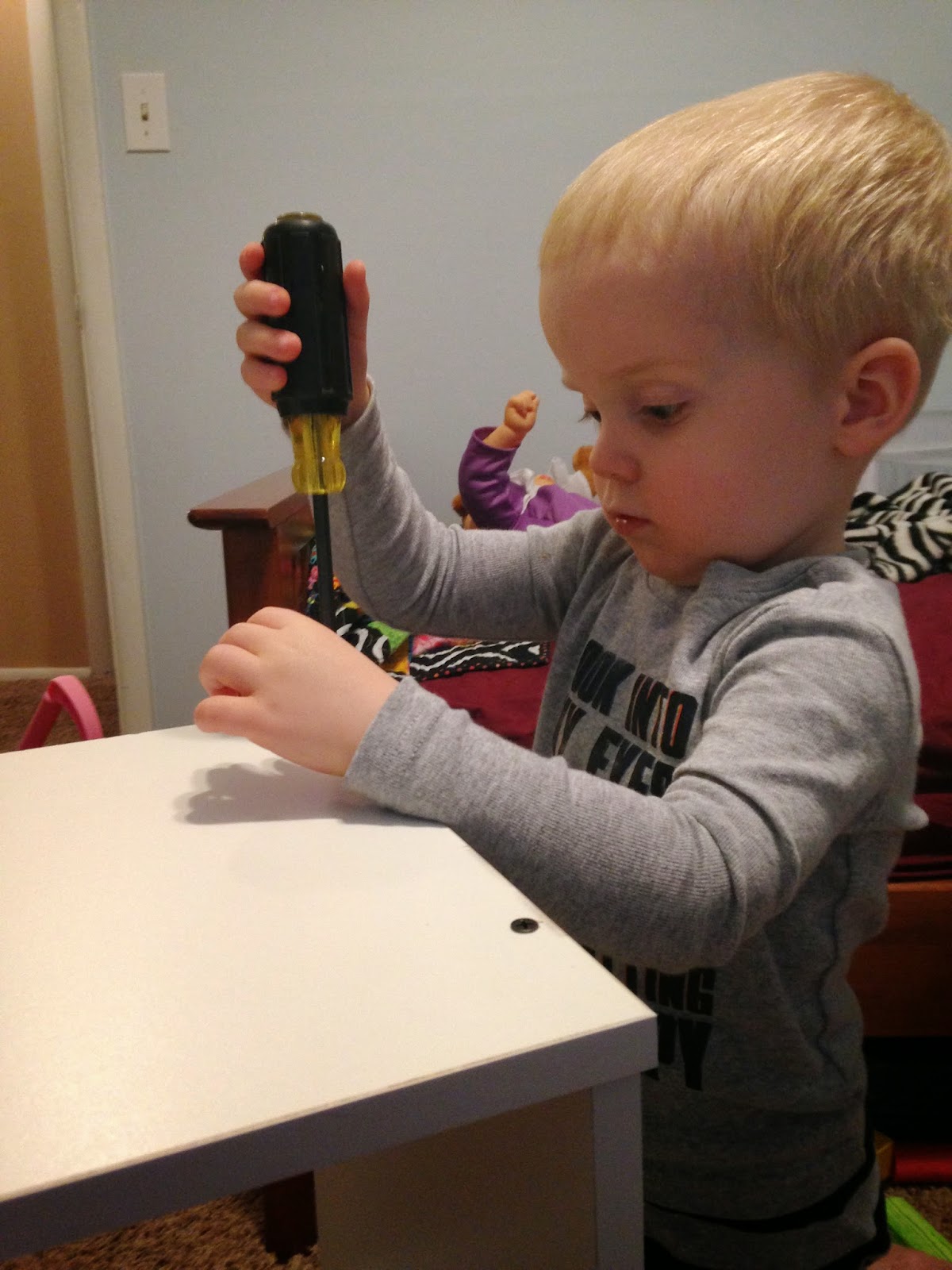 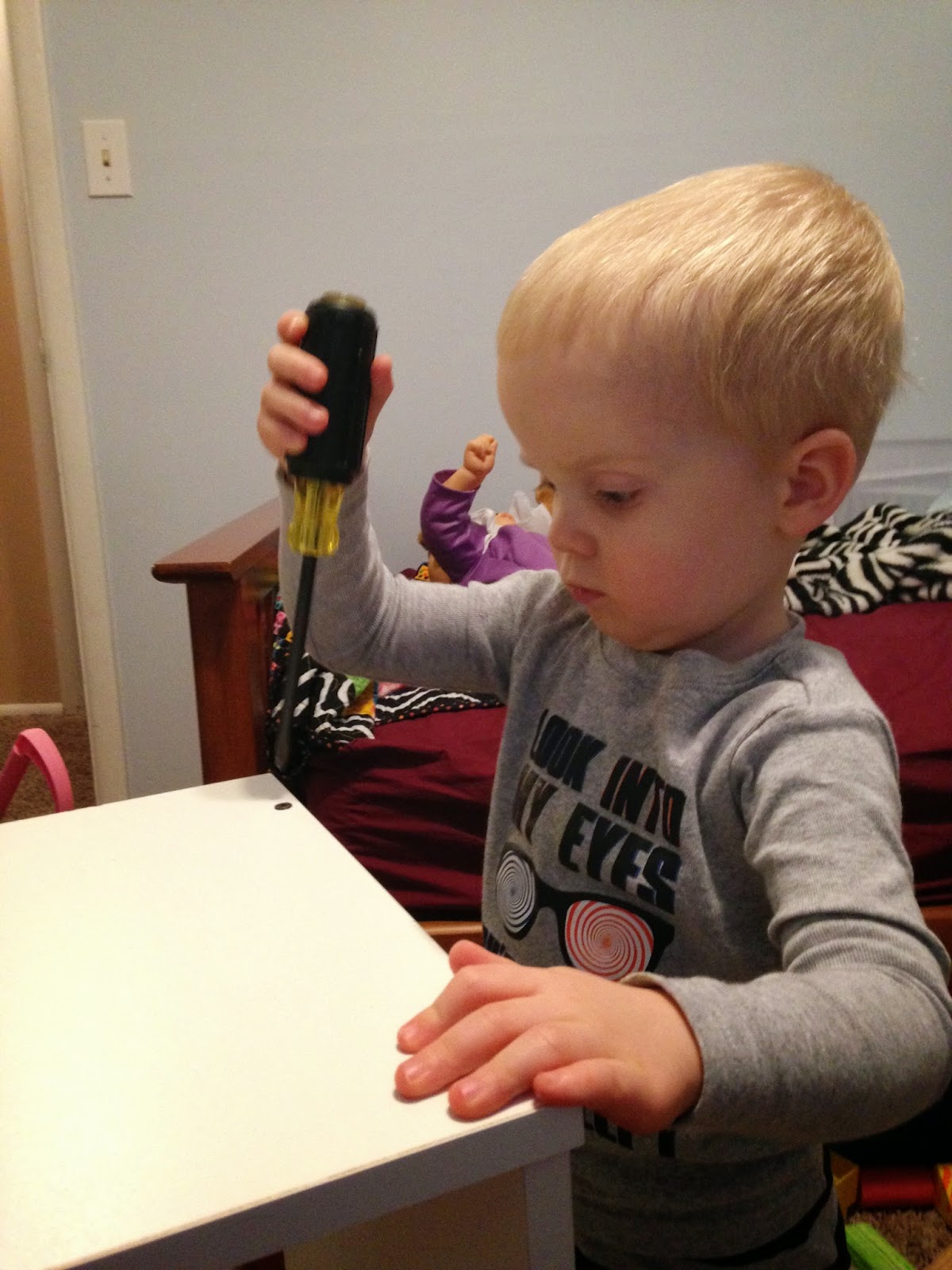 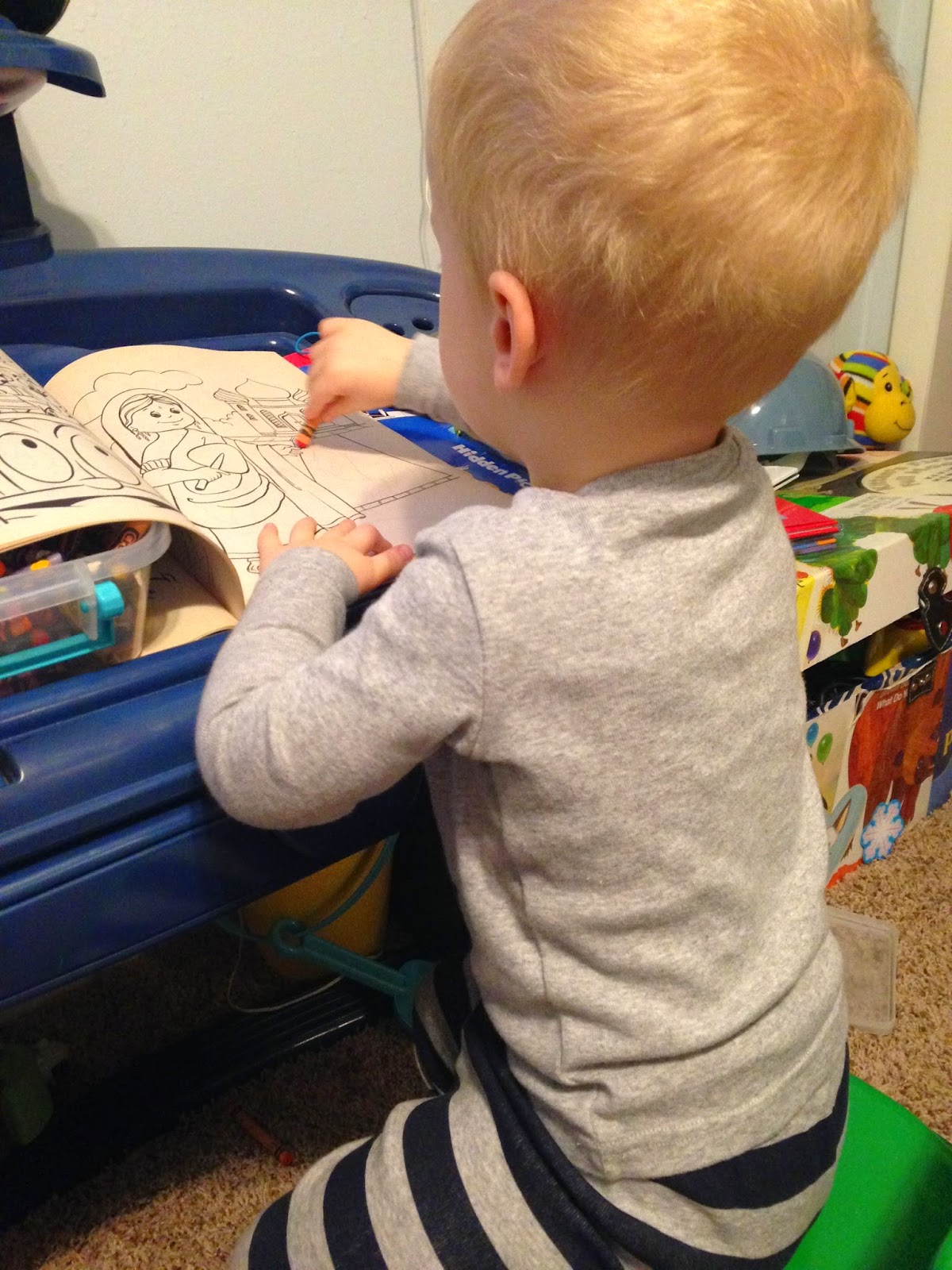 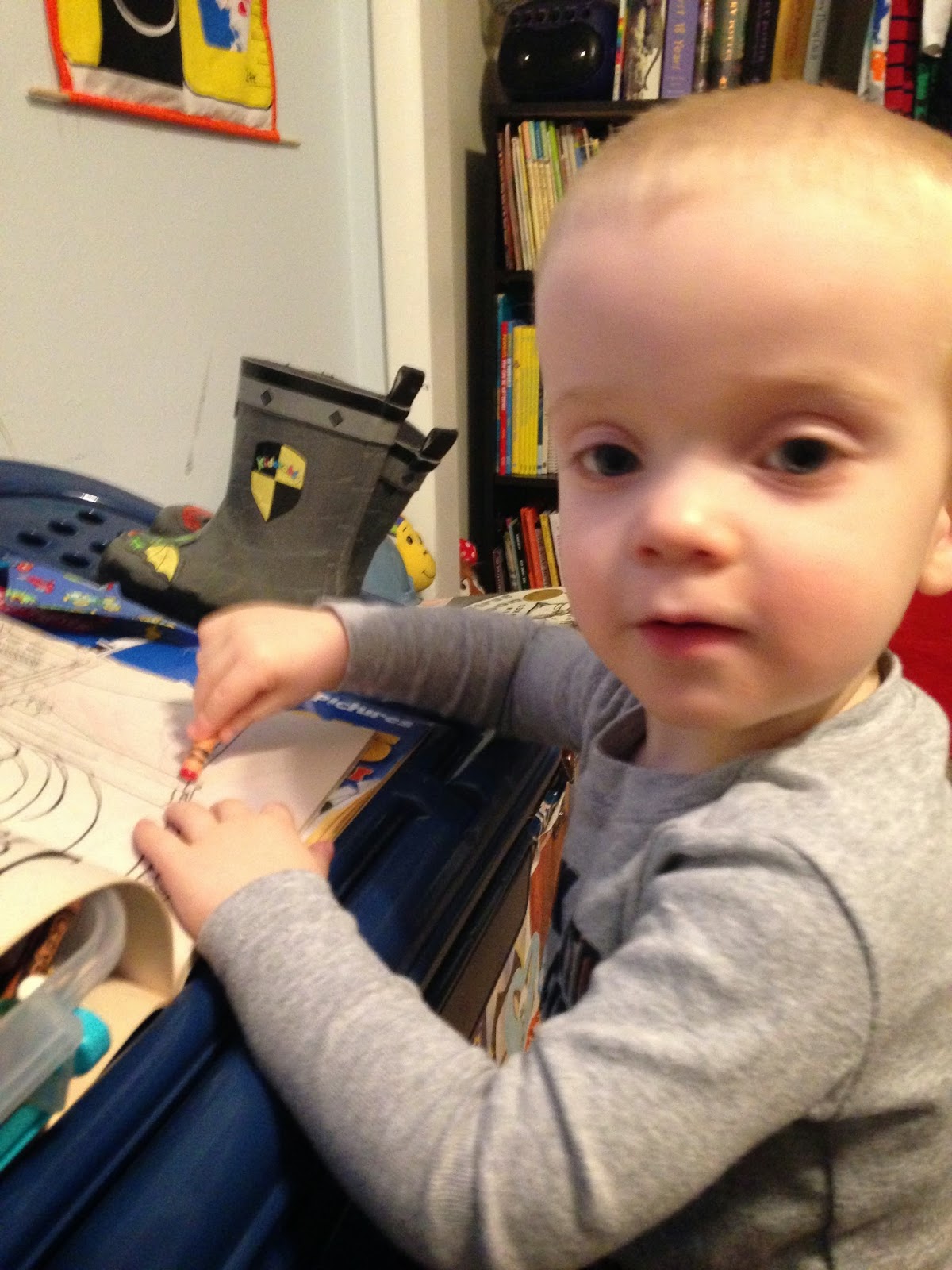 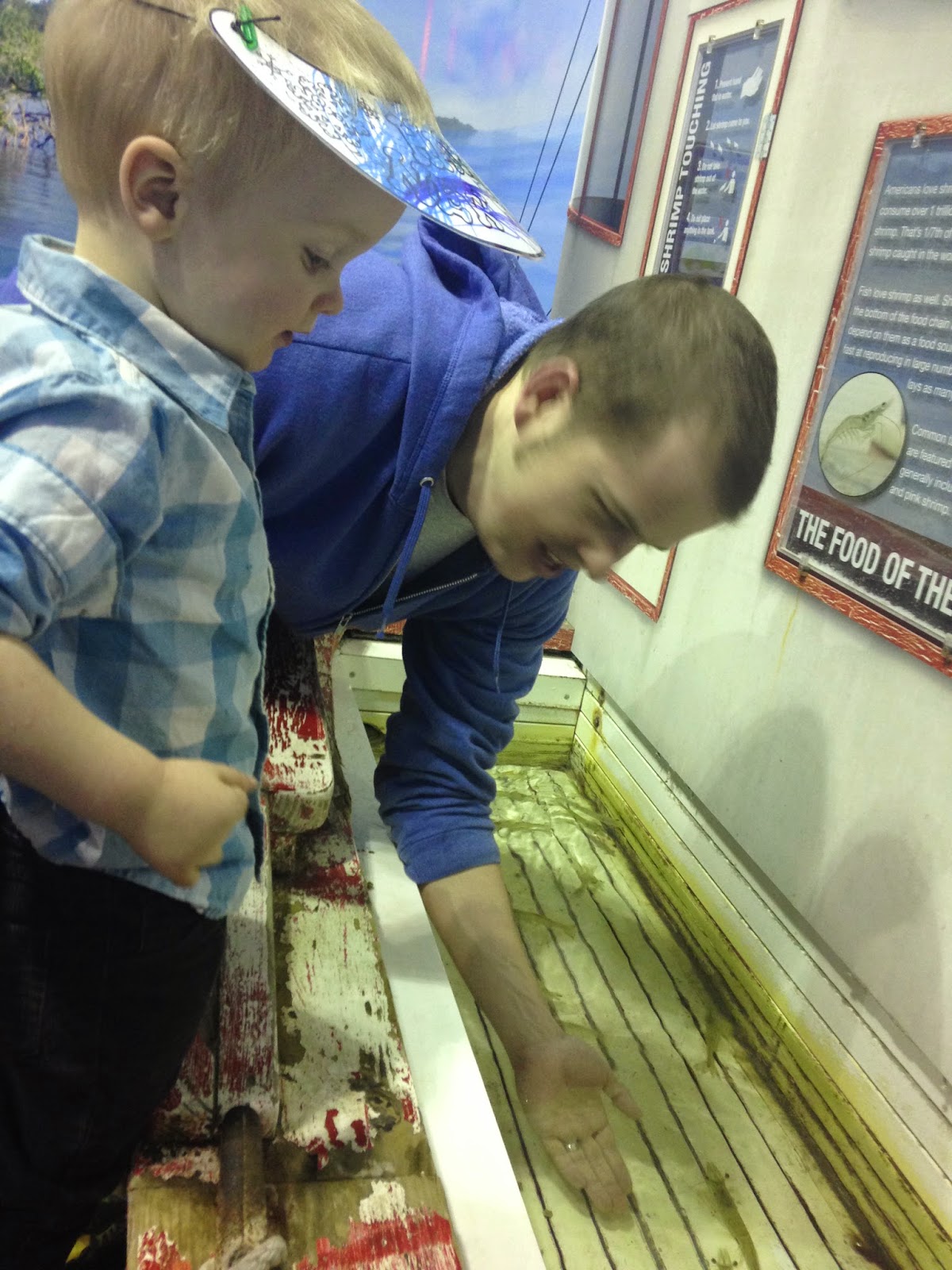 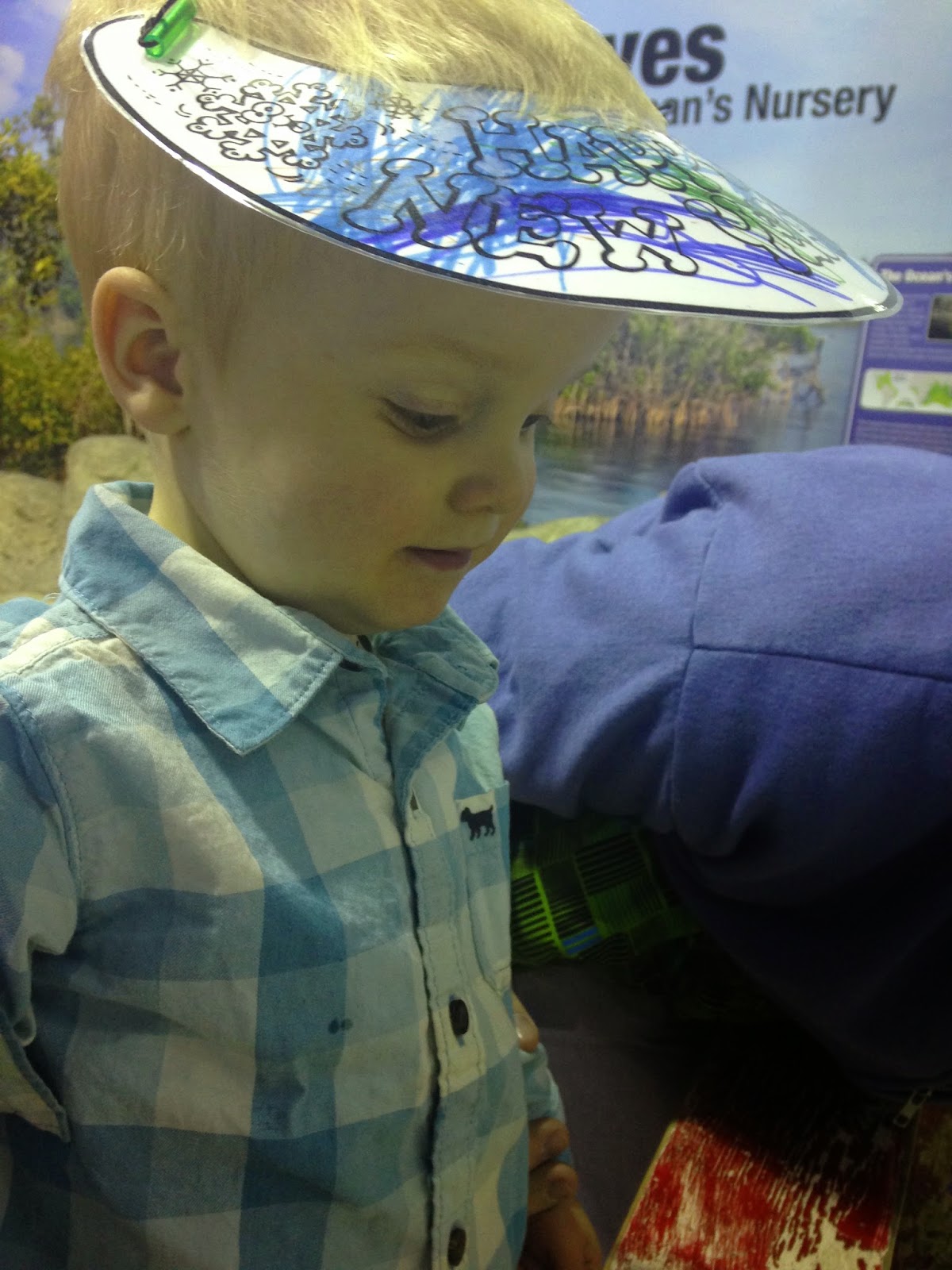 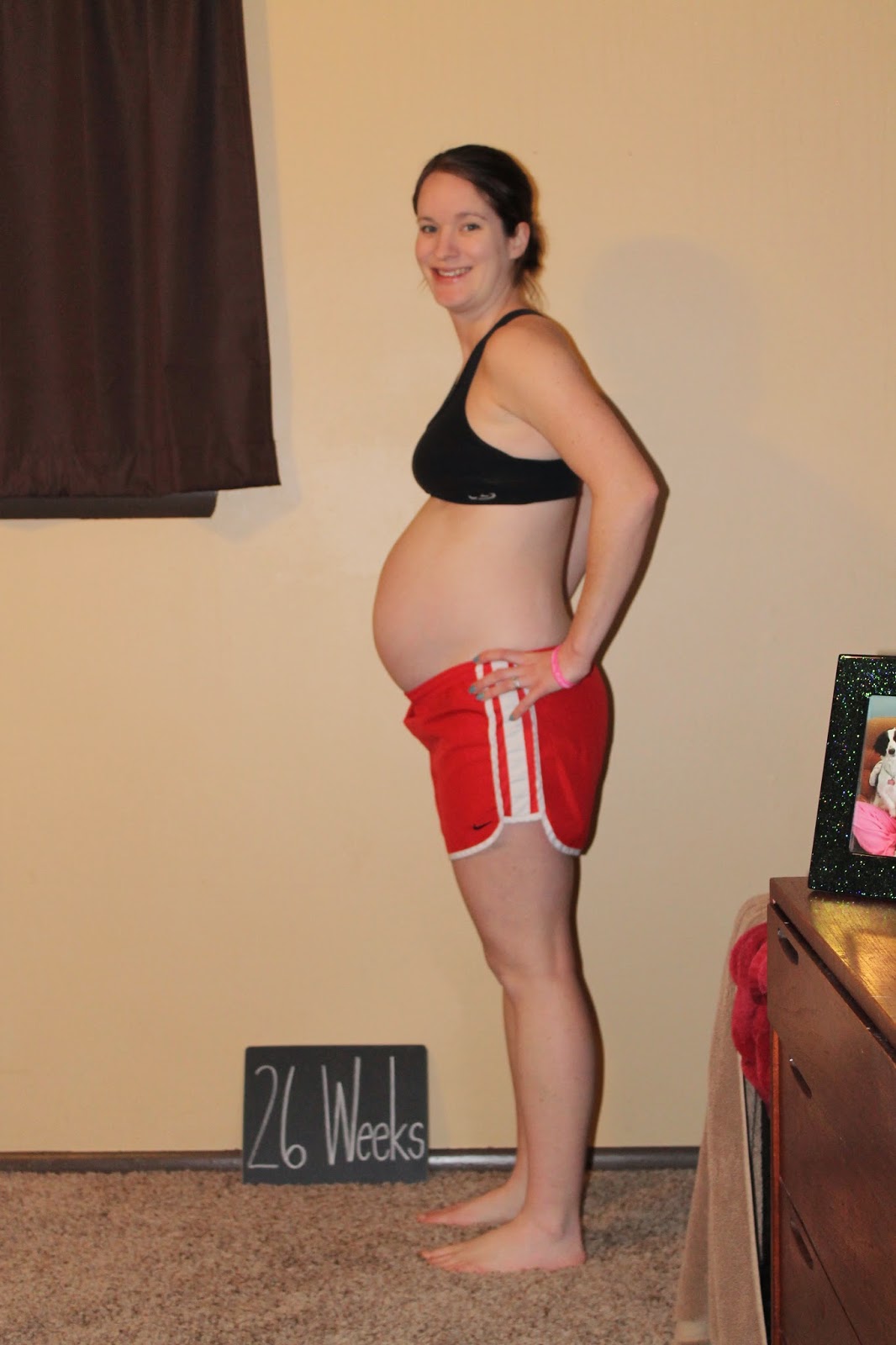 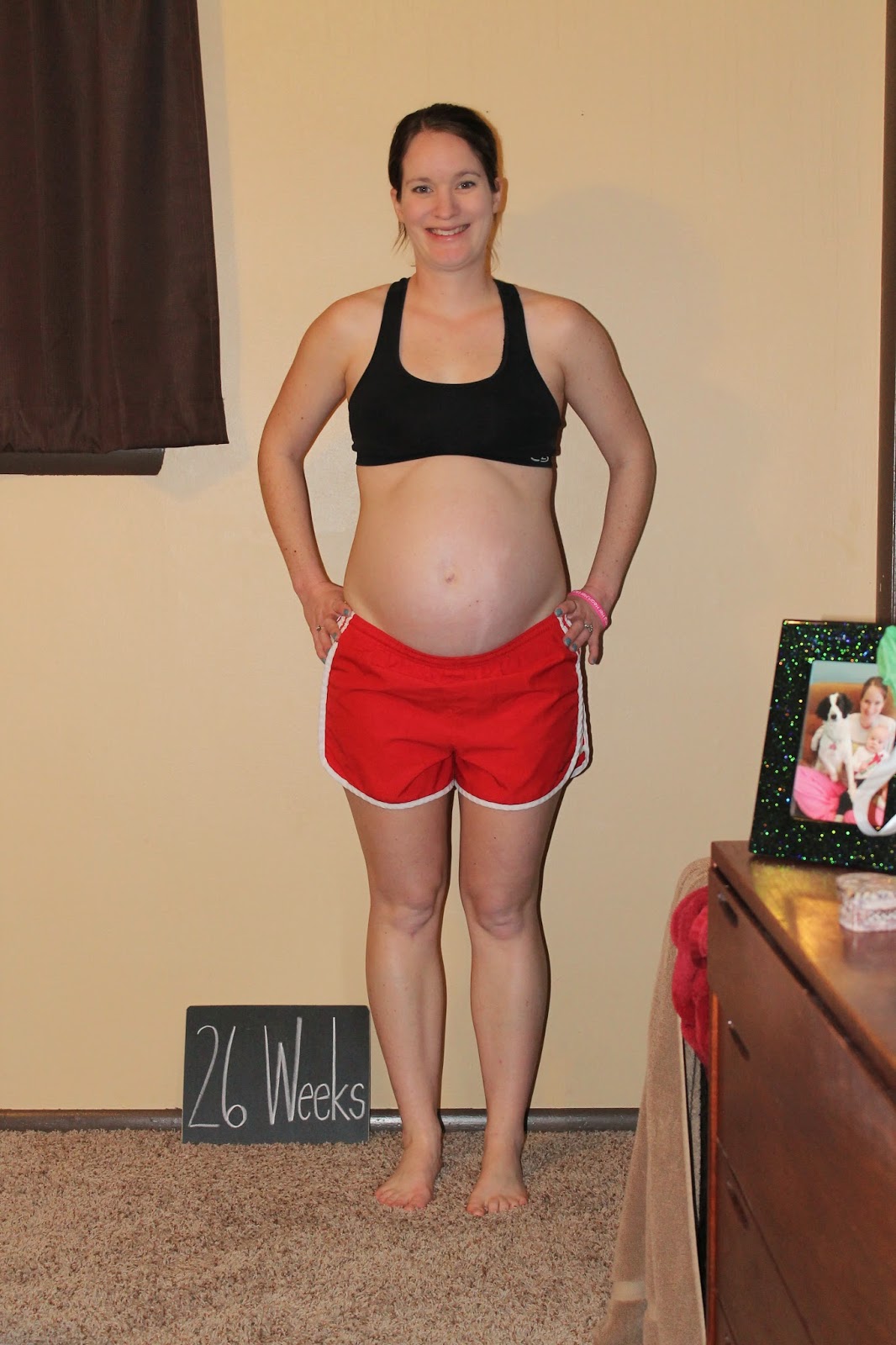 Baby's Size: Baby is around 14 inches long and weighs about 1 and 2/3 pounds.  She is practicing breathing amniotic fluid which will help with lung development.  That is a main reason why her chance of survival if she were to be born this week spikes up to 80%!

Weight Gain: I was up 17 pounds this morning.  Eek!

Maternity Clothes: Same as last week.  I still have about 4 regular tops that are longer than my other tops and have still been in my weekly rotation.  They are getting to the point where they are pretty short and I'll probably have to stop wearing them soon, but it's nice to have a bit more of a variety.

Sleep: Carter was still having some trouble during the night, waking up around 2:30 or 3:00 am crying.  On the days he didn't I only woke up once or twice to go to the bathroom which was nice!  I started getting more tired this week and went back to napping 20-30 minutes during Carter's naps a few days.  My allergies flared up over the weekend and I'd wake up feeling terrible because my nose was so stopped up I was breathing through my mouth which made my throat sore and all the drainage was already making my throat sore!  On our way to Ty's parents' house for the weekend I got really upset because I realized I forgot to pack my body pillow.  When I don't have it I really toss and turn and struggle to fall asleep, sometimes for hours.  I told Ty how disappointed I was and he told me he had grabbed it.  The feeling of relief and appreciation for Ty was immense!

Symptoms: Allergies started kicking my butt this weekend!  My tailbone is still pretty darn sore, especially right after running or sitting on the floor.  My skin is really starting to itch so it must be stretching.  I still don't have any stretch marks, I didn't get any with Carter so here's to hoping!  The Braxton Hicks contractions really kicked it up a notch this week.  Reading back over my bumpdate with Carter, they did this exact week with him as well.  I went out for a run on Monday and I could feel the entire bottom portion of my uterus tighten up and it stayed that way for a long time before releasing and doing it again.  Then on the drive home I had to go to the bathroom, but Carter was napping so I held it.  I kept having contractions and that along with having to pee was very unpleasant.  Finally I had Ty stop and thankfully Carter went back to sleep afterward.  Traveling when I was big and pregnant with Carter was tricky because I had to pee all the time.  This time it's even trickier because I have to pee all the time and we try to time our driving with Carter's naps so he naps in the car for part of the drive.  If I have to pee I don't want to stop and wake Carter up.  It's such a dilemma!  This morning I was leaking milk a little bit.  It's exciting that my body is preparing to feed Elise.  It definitely makes everything so real!

Running: My weekly mileage was 15 miles.  I'm still able to hit 9:00 minute pace without the stroller which is so much faster than with Carter!  At this point in his pregnancy I had slowed to 10-10:30 pace during runs!  I ran 4 miles with my dad on Christmas Eve and, man, did I pay for it.  I was sore and achy the rest of the day.  I figure I won't run farther than 3 miles anymore unless I feel really good and want to go for it.  After runs I'm a little sore and waddle for about an hour or so afterward.  On days I don't run I get calf cramps during the night that are so painful they wake me up, so I'll take the waddling!

Food Cravings: Smoothies!  I can't get enough fruit.  Ty's mom got out stuff for me to make a smoothie this weekend and now I need to go buy frozen fruit for our house because it was so delicious!  Oh and I really wanted a pretzel with cheese from Quik Trip all week so Ty got me one last night and it's all I can think about today!

Food Aversions: At this point I can't stand the thought of smoked bologne.  Everything else doesn't seem to bother me.

Movement: So much movement!  Little girl is a bit of a stinker though and tends to stop moving right when someone puts their hand on my belly to feel her.  Despite that Leina, Paul, and Ty's Aunt Netta all got to feel her this weekend.  She has been doing these movements where it feels like she's flipping or rolling over and sliding her body against my stomach.  She definitely moves more and stronger than Carter did.  Her movements tend to all be during the day.  Carter would wake me up moving around at 4-5 am, but anytime I wake up to go to the bathroom she's sleeping and not moving.  I'm hoping that means she'll be a better nighttime sleeper than Carter was!

Best Moment of the Week: Christmas and time with family was amazing.  Carter got so excited for Santa to come and was hilarious pouring milk over the cookies!  Anytime someone asked me what I wanted for Christmas, I told them stuff off our registry for Elise.  My family delivered big time!  We got everything off our Target registry and a few things off our Buy, Buy, Baby registry.  Carter is now sporting a pink diaper we got for Elise because I figure, why not?

Currently Loving: The nursery coming together.  While we were visiting Ty's family this weekend my mom painted the ceiling and stripe along the top of the wall in the nursery pink along with the sections on the dresser drawers we had painted blue for Carter.  We picked up pink baskets for the cubbies in the nursery.  Everything is looking so good!  This morning I had that nesting feeling something fierce and cleaned out/arranged the playroom, mopped the floors, put together the cubbies for Carter's room, organized everything in those baskets, and vacuumed the whole house.  Now that I'm sitting down, I'm exhausted!

What Big Brother is Up to This Week:  Carter had such a blast over Christmas.  He loved his Santa gifts and all the toy cars he got.  He got to see his Uncle Paul and Auntie Amanda again which he loved.  He sure is smitten with Auntie Amanda!  He'll run through the house looking for her when he's not sure where she is.  He's started pointing into the nursery while saying sissy.  He'll also look into the crib and point at it while saying sissy.  I'm not sure he really understands what will happen, but he knows things in that room are changing because of "sissy".  When we change his diaper he looks up at the ceiling and exclaims "pretty!"  I think he likes the pink!  My Week 26 Bumpdate with Carter.