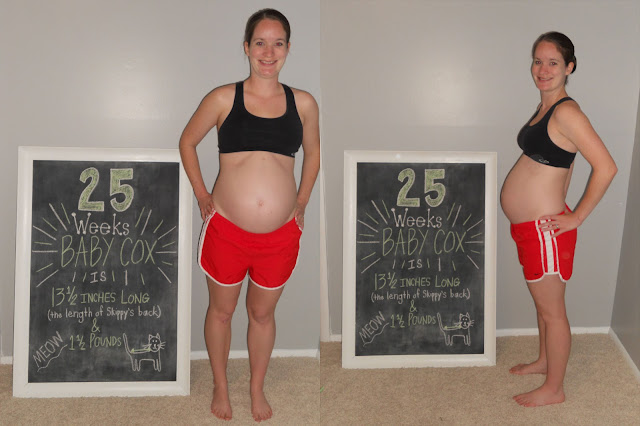 Can you believe it’s been 25 weeks?!!?  I sure can’t.  So much has happened, but it has all gone by so quickly!  I ran 6 miles with Ty this past weekend.  I wasn’t planning to run the whole way with him, but I was feeling so good I went ahead and did it.  I told Ty it was the first time in 6 months I felt like a runner rather than a pregnant person out attempting to run.  I was reminded of why I enjoy the act of running.  Lately I’ve just enjoyed the way I feel after I run, not so much during the run.
This weekend Ty and I are going to a birthing class.  The class is offered through our doctor’s office and lasts 5 hours!  It includes a tour of the hospital.  Ty painted the ceiling and top section of the nursery blue.  I love it!!!
Lots has been going on with Baby Cox.  He grew an inch and a half this week and about a quarter of a pound.  His hands are fully developed and he spends most of his awake time feeling around.  His nostrils are cleared out and he is practicing breathing through his nose.  He’s growing more hair and if we could see it, we would know what color it is (what a tease)!!!
Posted by Liz Runningmomma at 9:30 AM