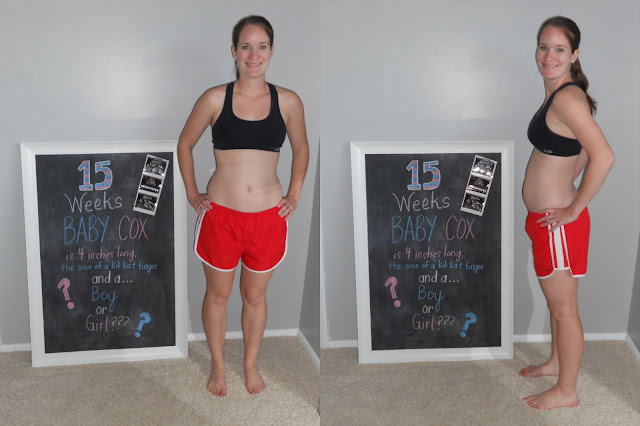 Woo hoo!  We have great news from our doctor’s appointment today!  Baby was cooperative (like we all knew he/she would be, right?) and the doctor was able to discover the gender.  He said he’s 98-99% sure of baby’s gender.  Ty’s co-worker called the cake place to inform them of the gender and we are off and running to reveal Baby Cox’s gender.  And now the waiting starts…  Not that I’m anxious to know or anything.  :o)  We asked the doctor how often he gets the gender wrong.  He said he’s worked there 7 years and delivers about 300 babies a year and he’s wrong about once a year.  I like the odds of 7:2100/1:300! 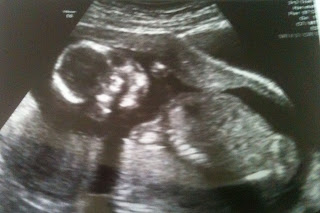 My first thought when baby appeared on the screen during the ultrasound today was, that is a big baby!  Measuring in at around 4 inches long and the size of one strip from a Kit Kat our baby has more than doubled in size since the last time we saw him/her in an ultrasound!  Baby is also breathing amniotic fluid through the nose and upper respiratory tract which helps the air sacs in the lungs to develop, pretty amazing!  Baby also can sense light even though the eyelids are still fused shut.  If I shine a flashlight at my belly, the baby will shy away.  Taste buds are also beginning to form.  That’s a lot of development and work for a little 4 inch baby!  No wonder he/she was sleeping during our visit today!  Baby was not nearly as active as our last appointment.  Our last appointment was in the afternoon and this one was in the morning.  Maybe baby is not a morning person!  The heart beat was 154 beats per minute and much louder than before.  The doctor said most likely due to baby being larger and closer to the wand thing (my words, not his).  According to the scales at the doctor’s office, I’ve gained 3 pounds!

I’m just so thrilled I feel like I could burst!  Each visit is more and more exciting and I can picture the little baby in my arms just a little bit better.  Grow, little baby, grow!!!!
Posted by Liz Runningmomma at 8:29 AM