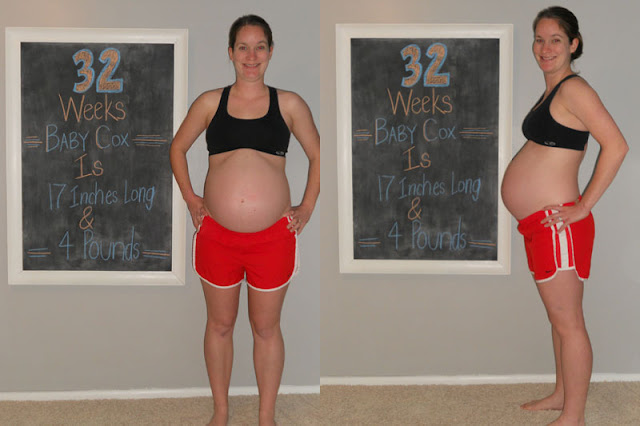 I’ve been getting comments that it looks like I’m carrying a bit lower these days.  I’ve had less hip pain lately so I’m thinking maybe he has moved down a bit and is putting less pressure on my hips.  My belly button is really starting to pop.  It’s the weirdest thing.  The top half of my belly button is popping out and the bottom part is still in.  It makes it look like I don’t have a belly button from far away.  Who knew a belly button could get in the way?  I was bending over shaving my legs in the shower (which is getting more and more difficult).  When I pulled the razor up I accidentally caught and cut the top part of my belly button that is sticking out.  I never had to be careful to not cut my belly button before.  Baby is already bringing on the firsts.

I ran the Route 66 Half-Marathon on Sunday and had the nicest thing happen to me.  I had to take 2 porta potty breaks during the race (which was hard for me, I sure hate having to stop at all during a race), but was able to get through each one in under one minute.  At mile 6 there was a line at the porta potties.  The woman in front of me turned and looked at me and said I could go in front of her.  She said her mom taught her at a very young age that if there’s ever a pregnant woman in line for the restroom you always let her go in front of you.  I couldn’t even express to her how much I appreciated it!  I wish everyone had that philosophy in the restroom line.  I now do!
The race went really well.  Based on my pace during long runs, I knew I could finish in about 2:25 and if I had a really good race possibly under 2:20.  I finished in 2:19!  When I got to the 8 mile mark I looked up at the clock and thought, normally I’d be finishing right now and I still have 5 miles to go!  That was a bit tough mentally.  I recovered really well and was even able to run very slowly the next day.

We have a doctor’s appointment on Wednesday.  I’m excited to see our little turkey again!  We’ve been looking for a pediatrician and Ty has called a few doctors.  He was talking to a nurse at one office and referred to Dr. S as “our gynecologist”.  He said the nurse giggled and he realized, well not really his gynecologist and in this situation more of an obstetrician.  The story made me laugh.  He’s been so supportive and a part of everything going on.  He has been to every appointment with me, so he knows Dr.S just as well as I do.  It’s a great feeling to know I have such a great partner and coach to help me through what is coming in 6-10 weeks.  Wow, 6 weeks sounds soon (Baby Cox make it to 40 weeks)!!!!

Baby Cox is getting so big!  He now has fingernails, toenails, and real hair (most likely).  His skin is becoming soft and smooth.  He will be doubling or tripling in size over the next 8 weeks!  He has been moving around so much lately.  Soon he will run out of room to be moving as much and I will miss it!
Posted by Liz Runningmomma at 2:51 PM