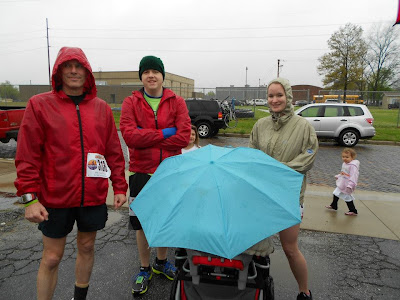 We had all been really excited for the Get Busy Livin’ 5K.  Saturday morning we woke up to constant rain.  My mom had planned to walk the course with Carter but I was worried about him being out in the rain.  I really didn’t want him getting wet and cold.  Ty quickly turned into McGyver pulling random objects from his car and was able to use a bungee cord to fasten an umbrella to Carter’s stroller. 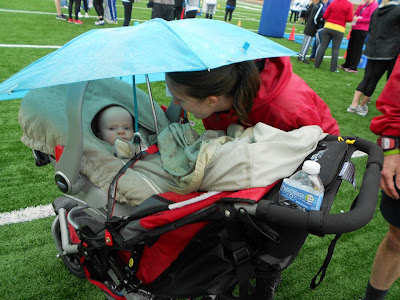 My goal for the race was to run faster than my time of 23:18 from last year.  I finished in 23:06, just barely beating that time.  Good for 2nd out of 70 in my age group.  At first I was disappointed I hadn’t run a little bit faster, but the course had lots of turns which really slowed me down! 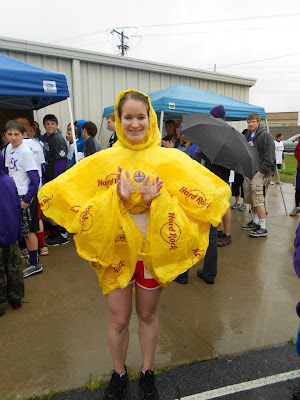 We had quite the showing with my older brother, Jeremy, winning his age group with a time of 19:57.  My dad also won his age group finishing in 22:46.  My younger brother, Thomas, was 21st/59 in his age group and Ty was 44th in the same age group.  Mom was 15th/18 in her age group walking due to her recent knee scope. 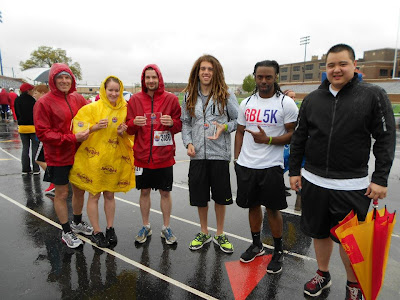 Like last year we had planned to run the Gorilla Dash, an obstacle course race, later in the day.  We were disappointed to show up at 3:30 for the 4:00 heat only to find they had closed the course early.  I guess due to the rain they didn’t have many racers, so they shut down.

Linking up with Ashley for Move it Monday: 
This weekend we had a great time visiting my family.  Sunday always comes too quickly and I never want to pack up and leave.  I got a migraine early in the morning which made me even less motivated to pack up and leave.  We wanted to leave around 5 to make sure we made it home in time for Carter’s bedtime routine.  Five o’clock came and went.  Around 5:30 I finally got motivated to pack up, but did so in a migraine induced daze.  We left at 6, putting our arrival time later than we’d hoped.
We were just pulling off the highway a few minutes from home when my mom texted me to let me know we forgot Carter’s bottle soap at their house.   Of course I had forgotten something!

When it comes to Carter I feel like I’m fairly laid back, although I may be using that wording loosely.  I don’t freak out when I pick him up from daycare with scratches on his head, from his own fingernails, but still could be upsetting.  I wash his clothes in regular detergent because it hasn’t bothered his skin.  I don’t worry when a toddler pats his head with a little bit too much force.  I at least try to be calm.  What goes into his mouth, now that’s another story!  I’m very particular.  I will not wash his bottles with regular dish soap.  I am very attached to BabyGanics Dish and Bottle Soap.  I will not use anything else.

So we pull back onto the highway and head to Target where I’ve bought the soap in the past.  Not only do they not have it, they no longer carry it.  At this point it’s nearing 9:00 and I still have a migraine thumping around just below the surface of my forehead which makes me more emotional.
Ty, the calm person he always is, drops us off at home and heads off to Baby’s R Us which according to their website is open until 9:30.  I get a text back that Baby’s R Us and Buy Buy Baby are both closed.  He heads to Super Target because the worker at Target who helped him look for the soap when he couldn’t find it suggested he try a Super Target.  Still no soap!

I receive the following text: Might just find a car with a baby on board sticker on the car in the driveway and break into their house.  They might have some…

Which reminds me of one more reason why I love my husband.  He finds the humor in situations in which I do not and is able to use that to help me calm down.

Finally he heads to Wal-Mart which still doesn’t have our regular soap but at least has a special soap for babies.  Thank goodness for that! 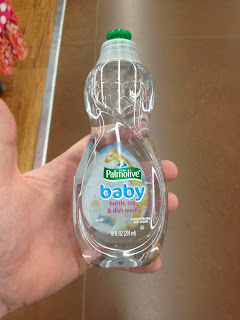 Moral of the Story:  Stock up on baby dish soap and never put a baby on board sticker on your car, it may result in a robbery!
Posted by Liz Runningmomma at 7:59 PM No comments:

This weekend we are headed to my hometown to run a 5k race.  The race is very special to all of us.  It is run for the Get Busy Livin Foundation which was created to honor Dylan Meier.  Jeremy and I were in high school at the same time as Dylan and he was in Jeremy’s graduating class.  After graduation Dylan went on to play football at K-State and then overseas.

In 2010 he fell during a hiking trip and sustained fatal injuries.  He was the type of person who impacted the lives of people who barely knew him.  He was outgoing and charismatic and people were drawn to him.  I will never forget sitting in my bedroom getting ready for work and hearing the news on the radio.  His memory lives on not just with this race, but in the hearts of so many people who knew him.  It is by far the largest race in the surrounding area which says a lot about his character and the type of person he was.

Last year I really struggled at the race and just couldn’t get my legs going.  I finished in just over 23 minutes and was disappointed.  I couldn’t figure out what was wrong with me.  I didn’t know at the time, but I was pregnant.  We found out about a week later.

Every year this race is the most important one I run and it means the most to me.  Running in honor of such an amazing person really motivates me to be the best I can.  This year my goal is to beat my time from last year.

Posted by Liz Runningmomma at 8:21 PM No comments:


Some days when I pick Carter up from daycare as I hold him I miss him so much that I wish I could push him back inside of me.  That way I could have him with me everywhere I go.  Then I think of pregnancy and it’s all the little things that make me appreciative of where we are.
It’s Carter’s smile and the feel of his hair against my lips as I kiss the top of his head.  The sleepy smiles he gives me when he first wakes up.  It’s being able to bend over to tie my shoes in the morning.  Looking at Carter’s face while I run rather than feeling it pressed against my bladder.  Walking down the hall at work without being asked when my due date is.  Cleaning Skippy’s kitty litter box, I’m grateful that I can now help Ty out with that easy but unpleasant chore.  I slept on my stomach the night Carter was born and it was glorious!  There are so many things I didn’t even know I missed until I was able to do them again. 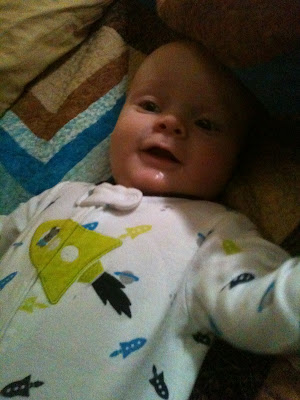 I loved being pregnant.  Honestly, I miss feeling Carter kick against my stomach.  Some weird part of me enjoyed the challenge running while pregnant presented.  There were parts of pregnancy that weren’t the best, but I enjoyed almost every moment.  Will I do it again?  Yes, God willing.  Will it be any time soon?  Heck no!  But I hope next time around will be just as enjoyable as it was with Carter.
Posted by Liz Runningmomma at 7:04 PM No comments:

Email ThisBlogThis!Share to TwitterShare to FacebookShare to Pinterest
Labels: pregnancy


Everyone messes up.  I make a mistake or mess-up with Carter on a weekly if not daily basis.  My most recent mess-up was clipping his nails.  We were getting ready to leave for the day and I noticed his fingernails were really long.  I hate it when he claws himself during the day so I decided to clip his nails.

Mind you I have only clipped Carter’s nails once before.  I accidentally clipped one nail too short, Carter cried, and I decided I wouldn’t clip them again.  I either filed his nails or had Ty clip them.  I knew I didn’t have time to file his nails, so I decided to very carefully clip them.

He was in the jumparoo so I had easy access to his hands.  I grabbed the first hand and started clipping.  When I got to the second hand I was so relieved and thought in my head, thank goodness I haven’t nicked him yet.  I got to his thumb on his right hand, the last finger to clip.  That’s when it happened.

I clipped the nail and felt very successful, I did it, I’m done!  I looked at Carter’s face and it was bright red and his lips were drawn down into a frown.  He began to wail and that’s when I saw blood bead up and roll along the tip of his finger.  I panicked, did my best to not cry along with him, grabbed him out of the jumparoo and immediately popped his thumb into my mouth and sucked it.  Why?  I have no idea.  I guess I thought it would help with the pain?  Doesn’t make much sense thinking back on it, but I was desperate.

What happened next?  My momma worry kicked in.  By the time I got to daycare the next day I was convinced it was infected.  Welcome to the life of a mom, trying to do the right thing, messing up, and then endlessly worrying about it!  It’s been almost a week and it’s healed up just fine.  No infection at all.  Now the guilt I feel for hurting my baby?  Yeah, it’s still stickin around.

What I Was Meant to Be


I listen to the pounding of my feet against the ground and the inhale and exhale of my breath.  One arm is gently swinging back and forth in rhythm with the beat of my shoes on the ground.  The other arm is stretched out, hand carefully grasping the handle of a stroller.

As I propel the stroller along we sneak in and out of shadow, in and out of sunlight.  I look down at my son snuggled into the stroller, eyes closed tightly against the sun, arm wrapped around the toy we brought along for the ride.  His lips and chubby cheeks gently bounce along with the wheels of the stroller as we glide over cracks and bumps.  He is so content.  He learned to love the movement before he was even born, to nap to the gentle sway of a body in motion. 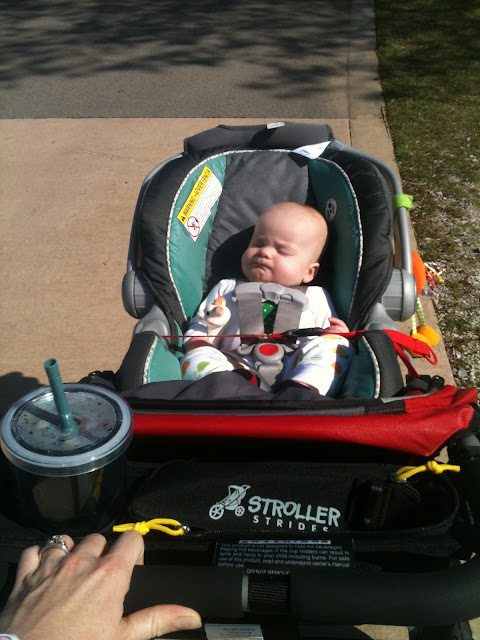 Linking up with Ashley: