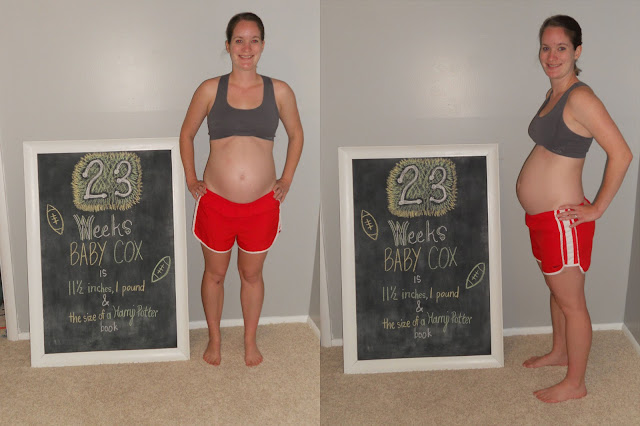 It has been a fun week!  We heard baby’s heart beat through a stethoscope for the first time.  It was the greatest feeling watching Ty’s eyes pop out when he had the stethoscope pressed up against my belly!  I have a little boy in my class whose aunt just had a baby a couple weeks ago and he just loves his little cousin!  He is also quite the hugger.  Today he was hugging me, resting his head on my belly (which he has no idea is quite sore these days)!  I told him maybe one day when he gives me a hug he will be able to feel the baby move.  His eyes lit up and he pressed his ear up to my belly to see if he could hear anything.  It was so precious!  I love my little first graders, well and second graders too!  They are so sweet.

Baby Cox has been doing lots of growing lately!  Fat production is in overdrive and he will double in weight over the next 4 weeks.  Thank goodness I won’t be doing that along with him!  His skin is now less see-through and his face is fully formed.  He’s even growing little nipples!  His sense of movement is well developed and he can feel me dance.  What a good weekend to be a wedding guest!  He can also hear well enough to hear Halle barking.  Which, unfortunately, she does quite frequently!  What I am most excited about is to start seeing him moving around under my clothes.  We should be able to experience that very soon!

Oh, and my belly button is getting more shallow every day.  I don’t know why, but I’m excited watching it start to pop out.  I was always fascinated with outie belly buttons as a kid.  Now I’ll have one of my own!
Posted by Liz Runningmomma at 5:44 PM