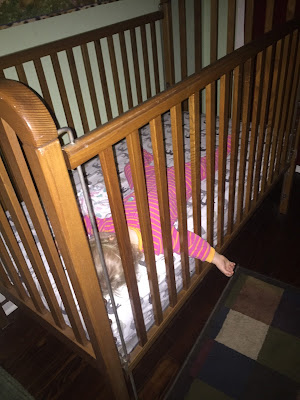 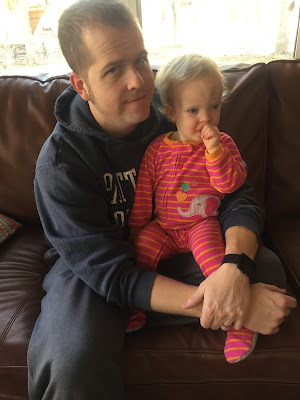 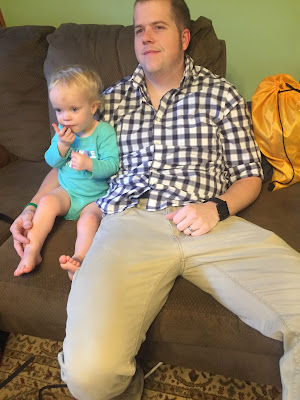 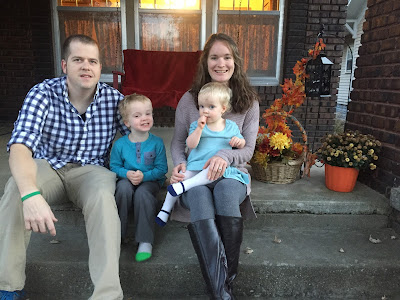 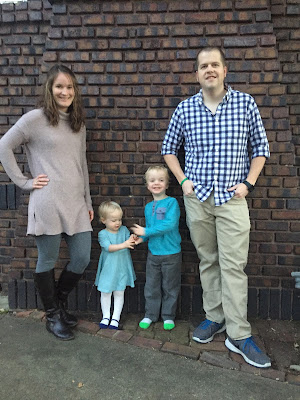 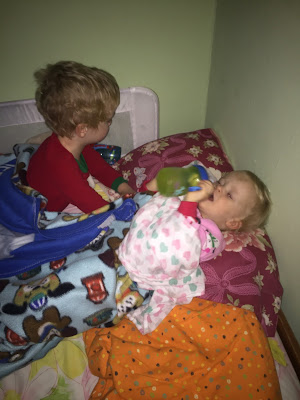 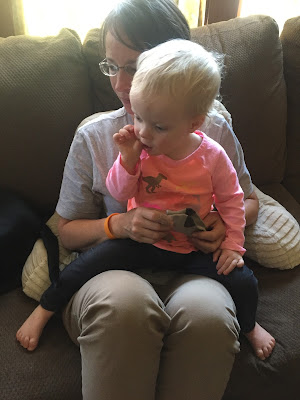 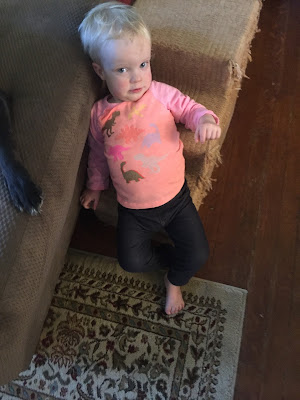 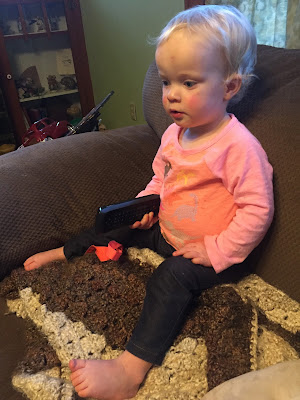 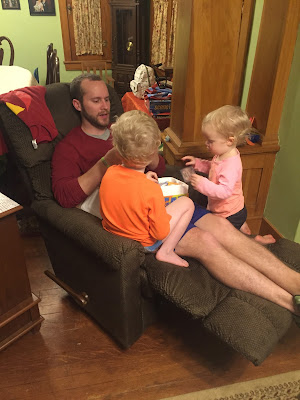 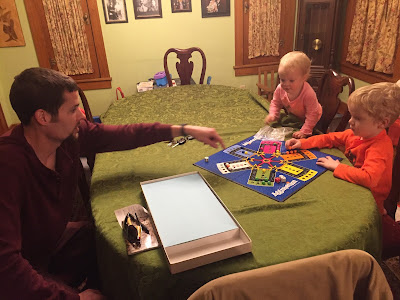 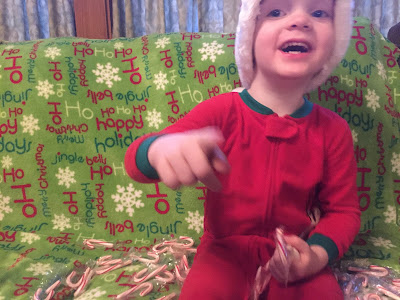 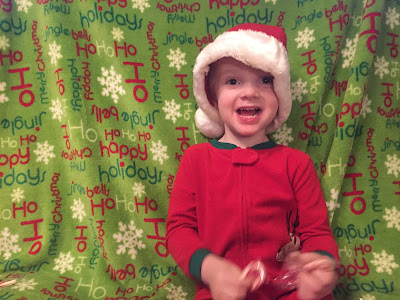 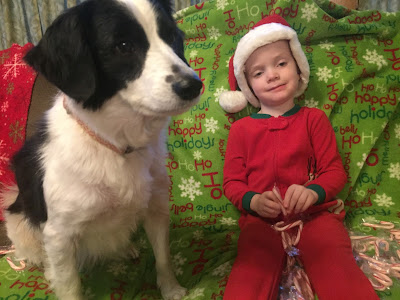 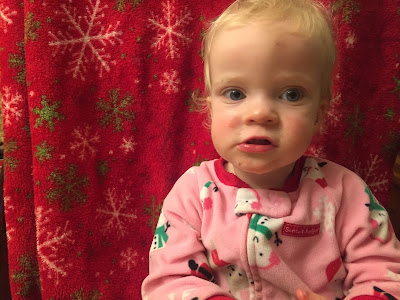 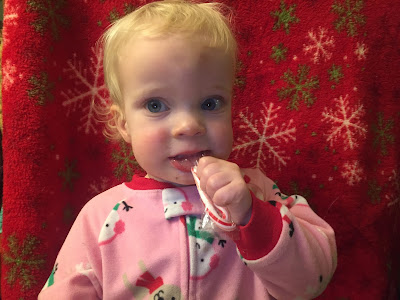 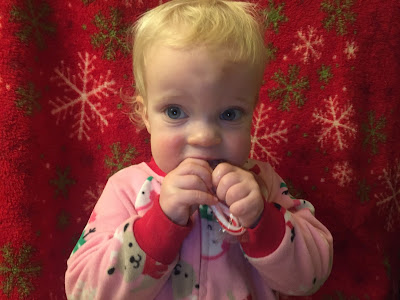 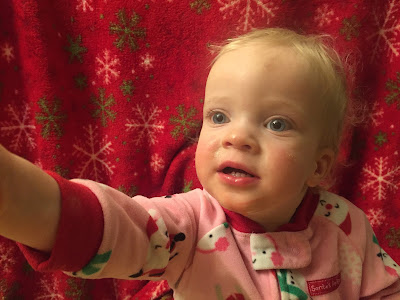 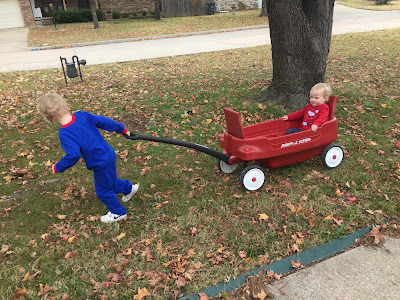 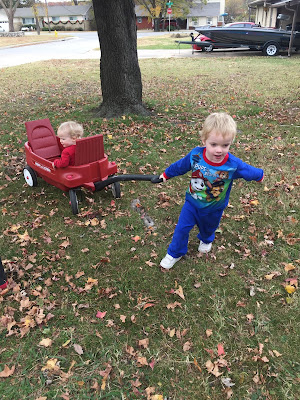 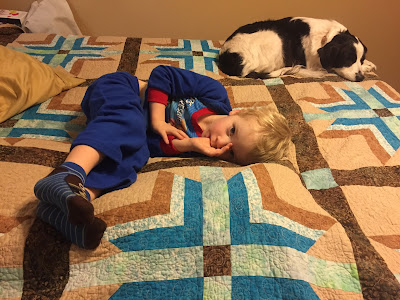 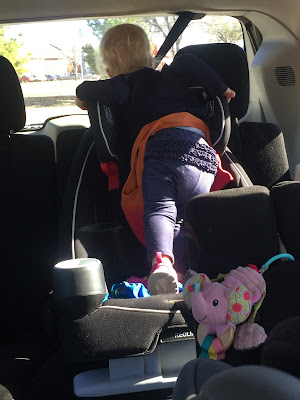 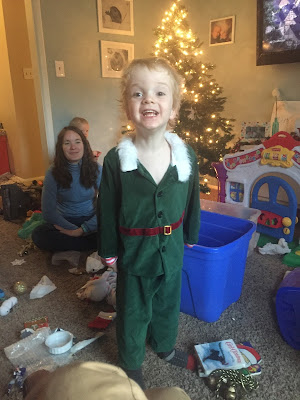 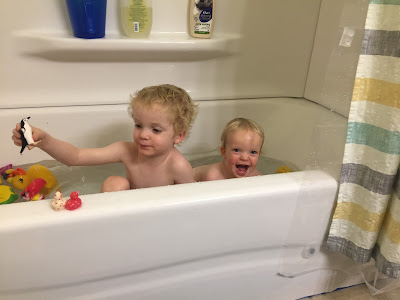 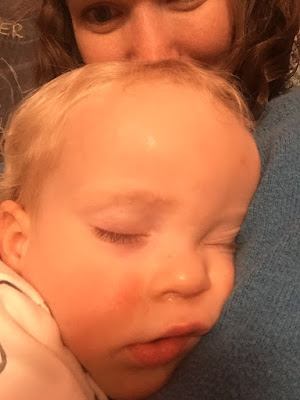 For the past few years we've made it a tradition to run the Turkey Day 5k on Thanksgiving morning. This year when mom went to search for the race there was no new information. Dad called the charity that normally puts the race on and they said the Route 66 Marathon had picked them up as a charity beneficiary so they weren't putting the race on this year as they weren't in need of the funds. I told mom, no big deal, it's rough running a 5k just a few days after a half-marathon so I didn't mind missing it. Then she got interested in a Turkey Trot near her house. She decided she and dad would run it and then drive out to our house afterward. Once she started sharing details about the race, such as they were serving Krispy Kreme doughnuts and Starbucks coffee to finishers after the race, Thomas decided he wanted to run it too. When she told me that I said we might as well all run it and do Thanksgiving at their house this year. I'm so glad we did because this was the most fun I've had at a race all season, and I ran a race a few weeks ago that served wine at the finish line! Plus the shirts were adorable and super soft. Mom and I made some Thanksgiving color tutus to wear during the race and we all pulled out our turkey stocking caps mom made for us to wear in our first Turkey Trot 5k back in 2013. Well, except for Thomas, he forgot his stocking cap at home. 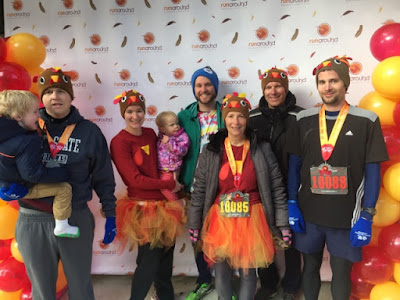 Since it was just 4 days after the half-marathon I wasn't running for a certain time or place. My plan was to run conservatively and have fun. I was excited because one of my friends and previous running buddies, Sara, was also doing the race and I felt like I hadn't seen her in years. She has a blog where she shares her amazing running journey and was a huge part of the reason why I decided to gun for a fast half-marathon time this fall. Seeing her running huge PRs in her 30's as a mom made me think maybe it was possible for me too. She was also a few days out from having run a half-marathon as she ran one the day before we ran ours. Not to mention she had already put in two sub-3:00 marathons this season before her half! I knew she wouldn't be fresh for the race either but I also knew she would win it regardless. Last year I ran 22:00 flat at the Turkey Day 5k we ran 4 days after the Route 66 half-marathon. That put me at about 15 seconds per mile faster than my half-marathon pace. Factoring that in, I figured I might be able to finish the race this year in about 6:45 pace but wasn't planning to push for anything in specific. We got a little later start than usual heading to the race so I only had time for a half mile warm up and a quick dash to the porta potties. As I walked out of the porta potty I heard the announcer say, "We have a special presentation and then there will be a countdown from 10 for the race start." I freaked out a little bit and took off running for the race start. Dad was a ways ahead of me and as I ran by to get to the back of the corral and work my way up he yelled at me and showed me a break in the fence where he snuck through. I was so glad he did because I would have started way too far back otherwise!


After the race started it took me about 10 seconds to get to the starting line due to where I was in the corral. Immediately as we took off running I could tell we were going downhill. There was a significant amount of downhill in the first half mile so I figured the first mile would be much faster than I expected. I was passing people the entire time. About a half mile in I saw Thomas running along ahead of me and then saw Jeremy. It was neat to see them during the race and Thomas and I chatted a little bit as I ran by. My first mile split was 6:23 and I was pretty excited as I had read the race was flat and fast. I figured I'd be able to run a decent time. I also remembered last year I felt great during the first mile and then struggled during the last two as my legs were still tired from the half-marathon so I expected to fall off pace significantly during the second mile and start to struggle. We went through a water stop and then turned up a large hill. I was kind of surprised and figured I must have been thinking of a different race as this one didn't appear to be flat. I could see quite a few women ahead of me and Sara way off in the distance in the front. I pushed up the hill and was feeling great. I was really pleased with how my legs were feeling. There were quite a few hills in the second mile which caused me to run a much slower second mile. I went through it in 6:56.

I started passing quite a few runners on the hills and I could see 3 women not too far ahead of me and started pushing to catch them. I felt really strong and was so pleased with how my legs felt. I couldn't believe how well they had recovered from the half-marathon. I think a huge part of that was being in better shape this year as well as taking an ice bath and wearing compression socks after the race. I caught the first two women ahead of me with about a half mile to go and was gaining on the last girl up ahead. I was feeling really strong and decided to really kick it up with a half mile to go. Then we turned a corner and could see the finish line ahead. I started thinking the course must be short as I felt like we had less distance to go than I expected. I had forgotten that the race was a certified course, meaning it had to be the correct distance. I caught up to the girl in front of me and as I pulled up beside her, she looked over and saw I was a woman so she picked up the pace. I let her go for a moment and then judged how my legs felt and realized I could push a bit harder so I really got after it and cruised past her toward the finish. I was surprised when I heard them announcing I was the second female finisher. I figured there would for sure be some women runners between Sara and me. As I was coming up to the finish line I saw the finishing clock was at 20:30 and figured for sure the course was short. Then when I stopped my watch I saw I had run 3.12 miles and remembered the course was certified. I was just able to run much faster than I expected. I really thought if I broke 21 minutes I would be having an awesome race. I finished in 20:31 which put me only 2 seconds behind my fastest 5k from last year and that was 4 days after a half-marathon! I couldn't believe it and I also couldn't believe how great my legs felt. I had missed my 3rd mile split during the race but went through it in 6:32 and I had finished out the last 0.12 miles at 5:20 pace! I watched Jeremy finish and was impressed by how close behind me he had been. I found Sara and then we saw Thomas and dad finish. We took off for a cool down back out on the course and got to cheer for mom as she went by and then Ty with the kids.


I enjoyed talking with Sara after the race and meeting her daughter, Albani. I feel like I know her through seeing pictures and hearing stories on Facebook as well as her blog. So I really enjoyed seeing her in person. They had City Hall open so you could go in to warm up. Mom, Jeremy, and I took the kids in to warm up and walk around a bit. Elise was running laps around and as we ran by Sara and her family, Albani said, "She ate a doughnut and it must have made her hyper." I thought that was so cute and it was obvious by looking at Elise's face and seeing the glaze all around her mouth that she had eaten a doughnut! We stuck around for awards and I got to chat with Sara and her husband, Jon, some more. Fun little side story, Sara and I were running buddies and Sara started a group run. Jon started running with us and they ended up dating a while later and then got married! Sara was the first female finisher and won a cutting board which I thought was a neat idea since it was a Thanksgiving race and plaques get old. I finished 2nd out of 776 females, 27th out of 1,291 overall, and 1st out of 107 in my age group. The age group awards were cute mugs with the same turkey beak and wattle on them as the shirts. I liked that the mugs were bigger than the average mug. Jeremy finished right behind me in 21:12. He was 37th overall and 4th out of 50 in his age group. Thomas finished next with a time of 22:44. He was 71st overall and 7th out of 42 in his age group. Dad finished in 24:24 which put him 1st out of 31 in his age group and 124th overall. Mom had a great race, running a time of 33:13. She was 633rd overall and 7th out of 27 in her age group. Ty did an awesome job pushing the double stroller on a hilly course. He finished in 35:47 which put him 772nd overall and 41st out of 50 in his age group. He's starting to get the itch to get into a better running routine again and ran Saturday and Sunday after the race. I'm excited for him to get back into shape so he can enjoy races a little bit more and maybe shoot for a PR in the spring!