What I Love About 7 Months

Normally at bedtime I lay Carter down and he stays down.  If he cries we rub his back or pat his bottom, but avoid getting him back up at all costs.  Tonight he wasn't having any of it and screamed through the bottom pats and back rubs so I relented and got him up.

As we were rocking he kept sliding down along my body until he was positioned perfectly so I could feel his heart beating on my stomach.  Of course feeling Carter through my stomach got me all sappy and thinking back to when he lived in my tummy and how much he has grown since then.  Slowly but surely my little man is growing up. 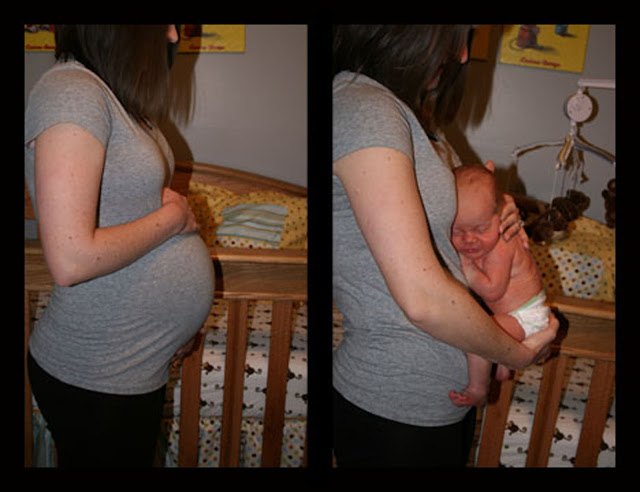 Seven months doesn't seem like a long time, but it definitely is when it accounts for the first months of life.  My precious boy has changed so much and is showing off his personality with a hint of attitude thrown in for good measure.  My mind drifted as we rocked and his eyes opened and closed slower and slower until they eventually remained closed and he drifted off to sleep.  As I sat staring down at my sleeping baby I couldn't help but think of all the reasons I love this age more than the last.

Here are the top 10 reasons I love 7 months:

1. The laughing, oh man the laughing!  His first baby giggles have turned into real belly laughs.  Sometimes he laughs so hard he has to stop to catch his breath.

2. The diapers.  When I think back to his newborn days I remember all the clothing changes that resulted from him peeing out the side, top, through his diapers.  All the times I ended up with pee on my clothes, my skin, Carter's face, the wall, the rocking chair, everywhere.  Our boy had range!  Now it's very rare for Carter to potty during a diaper change and most of his clothing changes are due to spilled food or drool.

3. How alert he is.  I love watching him push up on his arms and swivel his head to look around.  He's always taking things in.  On our runs he stares at the sky and watches everything around him.  When we take Harper with us, he watches her and laughs. 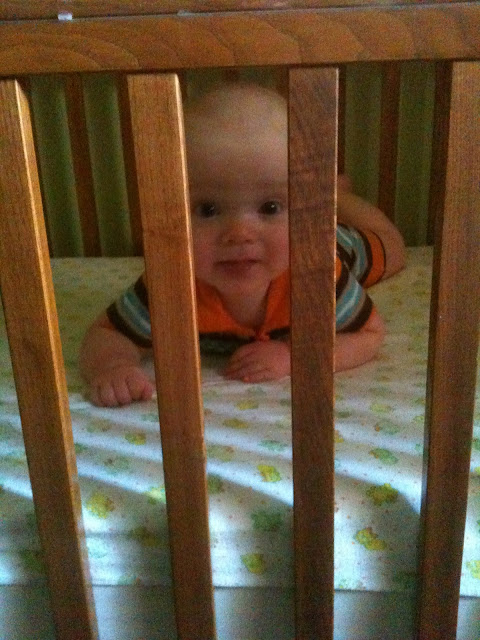 4. His grip.  I remember when he first started holding onto things, I was so excited.  Now he sees something he wants and reaches for and grabs it.  Sometimes it's a toy, other times it's my nose or hair, Harper's tail, his own toes, or a paper that fell on the floor.

5. The fuzz that covers his head.  That's right, fuzz.  He doesn't quite have hair yet.  It reminds me of the fuzz that covers a baby elephant when they are young.  The best part is that it has a mind of it's own and doesn't lay down like it's supposed to, it sticks up in random places.  The brush has nothing on his fuzzy hair strands.

6. Bathtime.  Every month he loves the water even more.  He's not interested in any of his bath toys yet, but LOVES to splash.  He doesn't just splash with his legs, he also splashes with his arms.  Sitting next to the tub I end up with water droplets covering my clothes. 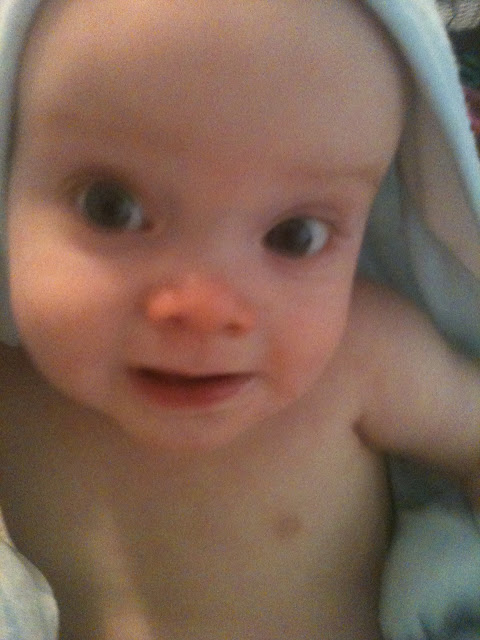 7. Cuddles.  I am one happy momma that Carter is still a snuggler.  He was a snuggler at birth and hasn't let up since.  Some days he gets fussy because, gosh darn it, he just wants to be held.  Having his body resting on mine with my lips resting on top of his head kissing him over and over and smelling his sweet baby smell, now that's divine.

8. The babbling.  Carter has definitely found his voice and uses it.  He loves the sound of his voice screeching.  Now if I do it back to him, his mouth instantly turns to a frown and wobbles while tears slowly build in his eyes until I speak sweetly to him.  Momma's got it, the screeching is only a good sound when it's his voice.

9. Baby food.  I love making it.  I love feeding him.  I love watching his mouth open wide when the spoon comes into view.  I love discovering his taste buds and figuring out what his favorite and not so favorite foods are.

10. The curiosity.  Anything new he has to have it to touch and to put in his mouth.  When he's sitting up if I set something beside him he reaches for it and sometimes topples over in his haste to check out this new thing he sees. 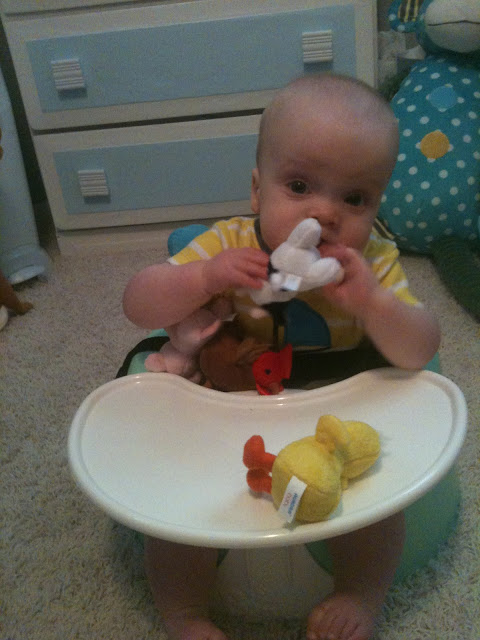 These are some of the many reasons why this month is the best one we've had with Carter.  I'm sure next month there will be a whole new list as he grows and changes even more.
Posted by Liz Runningmomma at 6:49 PM