I've been having Carter practice sitting up every day for quite a while now.  We do it on Ty and my bed so if he falls over and I don't catch him, he has a soft landing.  Normally he sits up for about 30 seconds before toppling over.


This morning I helped him pull up and get settled.  We reached the time he would normally fall over and he was still up.  I realized he was going for the long haul and grabbed my camera so excited my heart was fluttering.  I snapped quite a few pictures before Harper heard me praising Carter and jumped up on the bed to see what was going on.  As she jumped up she knocked Carter over.
At first I was disappointed, but then Carter looked over at Harper and pulled with his arms twice in an army crawl style to get over to Harper and grab her fur.  I couldn't believe it, Carter had just semi-crawled for the first time!  All day long I tried to get him to do it again, coaxing him with toys, Harper, my face, anything, so I could get it on video, but it just wasn't happening.

I'm sure he'll do it again and I'll get it on video, but if it's anything like the first time he rolled over it could be a month or more.  I'm okay with that because I'm not quite ready for my baby to be mobile and no longer rely on his mommy to get around.  :) 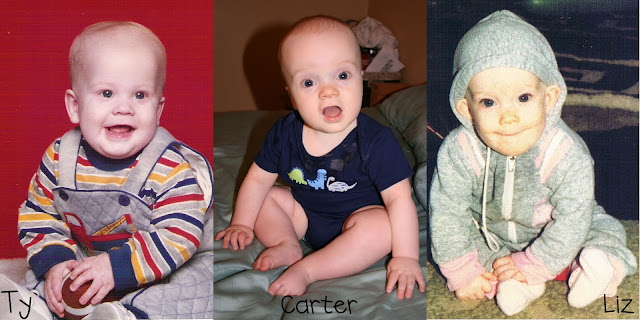 I just couldn't help myself, I had to put together pictures of Ty, Carter, and myself all sitting up for a comparison.  Is it possible that Carter is starting to look like more of a mixture of the two of us rather than Ty's little clone?

Posted by Liz Runningmomma at 7:22 PM