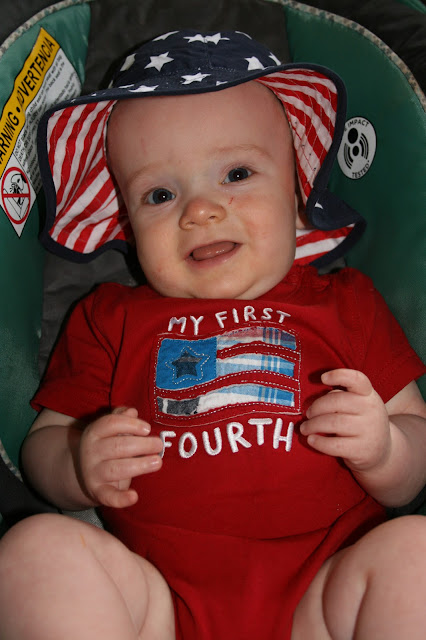 We are nearing the end of Carter's first holidays.  After today we just have Halloween and Thanksgiving left.  I can't believe it.  He is growing up so fast!  We started our morning by running the Firecracker 5k, Carter spectated this one.  More on the race to come later.  Then Carter and I took a nap while everyone else played Halo, including my mom and dad!

We had thought about taking Carter to the swimming pool for the free swim, but he napped through it.  We ended up taking him outside to play in his bouncer while we played yard games and grilled.  Enjoying time as a family is the best way to spend holidays!


Following suit with handprint/footprint crafts for the holidays we created a flag craft with Carter's handprint yesterday.  I didn't think it would work because he always curls his fingers down to his palm and rubs them around, but it did!  I put paint on his fingers first and then on his palm and left my finger in his palm, so when he curled his fingers he rubbed the red and white paint on my finger instead of his palm.  We only made a couple before he rubbed paint on his face and I panicked and ran to wash him off.  So they will just go to grandparents this time. 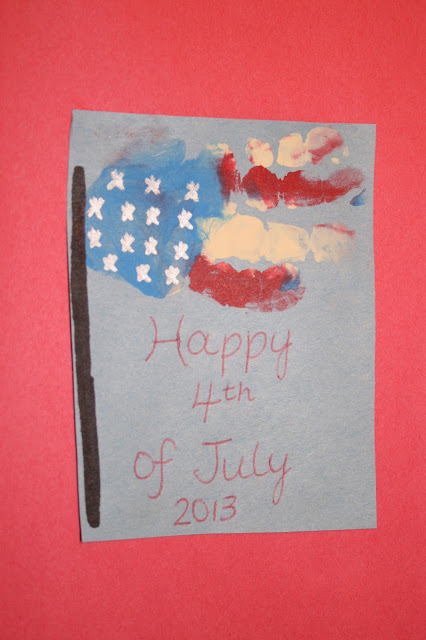 Then I saw a friend posted a picture of her son in a t-shirt they made on Facebook.  She used his handprint for the blue of the flag and then painted red stripes on a white t-shirt.  It was adorable.  I think I'll do that next year!  I found a picture similar to what she did.  She did the handprint sideways and painted fewer stripes. 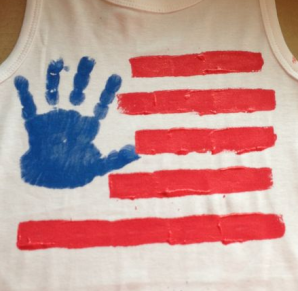 Posted by Liz Runningmomma at 3:34 PM