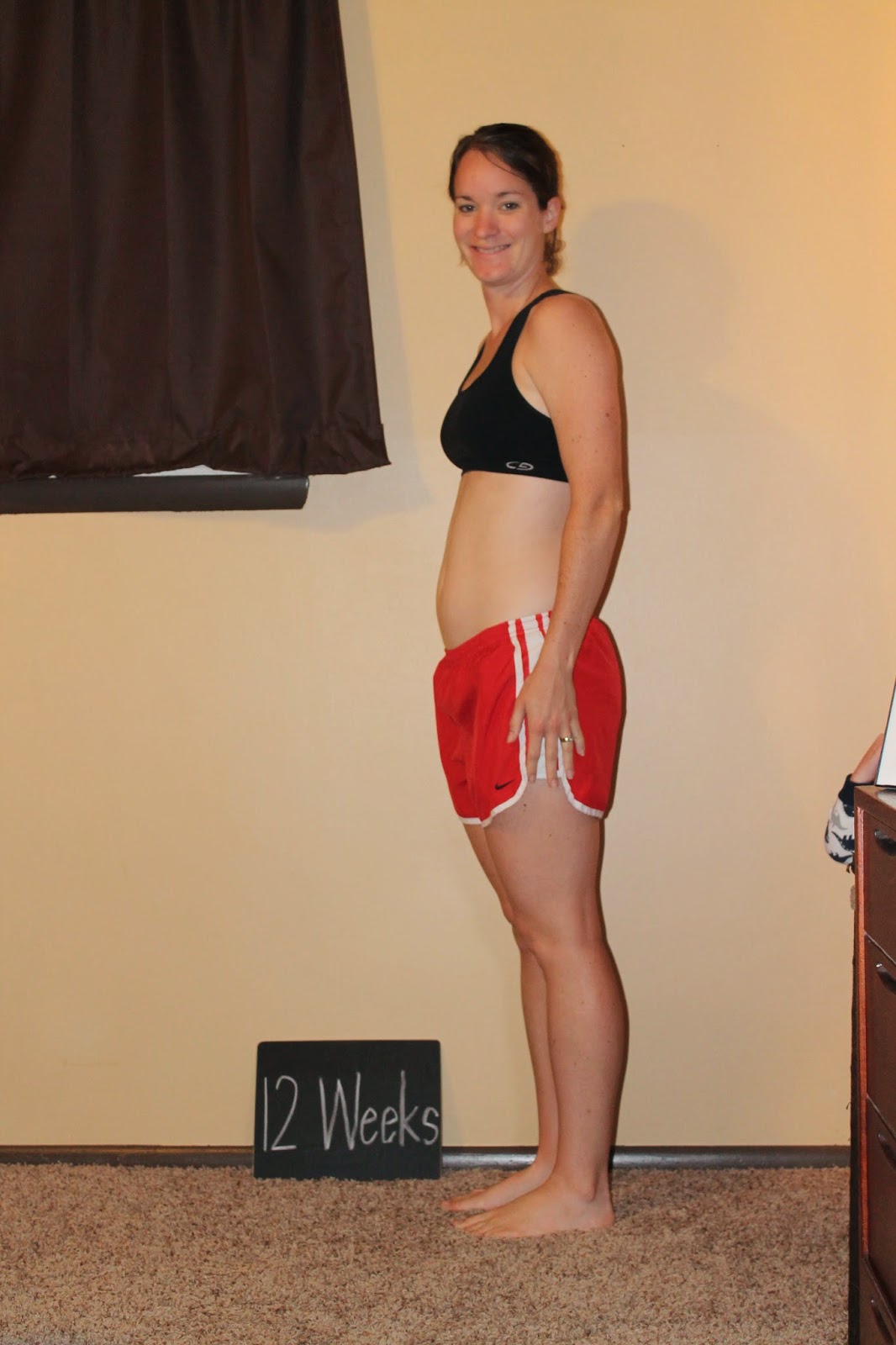 We had our 2nd doctor's appointment Monday.  We had another ultrasound and the doctor found that the placenta is covering my cervix which is called placenta previa.  He said it is very likely that it will shift away from my cervix as my uterus expands and my placenta grows.  I really hope that is what happens!  He said if it stays where it is I will be on exercise restriction later on and will have to have a c-section.  I had such the perfect delivery with Carter and every ounce of my being hopes that I am able to again deliver naturally.  When I made it out to the car I sat and cried for a little bit and then I realized how silly that was.  Here I was 12 weeks pregnant with a healthy baby and I was crying that I might need a c-section.  In the end it doesn't matter how the baby gets out, just that (s)he arrives safely.  Our doctor had also said the baby is measuring a bit on the big side which is totally different from Carter Man who always measured small to average at our appointments.  Baby's heart beat was 175 bpm and the doctor said we'll be able to find out the sex at our next appointment.  Just for fun, comparatively Carter's heart rate was 10 bpm slower at both appointments.  When I got home I looked up more information on placenta previa and I probably shouldn't have.  I found out that you can have heavy bleeding later on in pregnancy which could lead to an emergency preterm c-section and that I could also end up on bed rest.  Totally not ideal with a 2 year old running around.  Please pray, cross your fingers, or do a placenta dance for me, whatever you're into, that the placenta will be a sweetie like we know that baby is and go ahead and move it's hiney to where it should be.

Baby's Size: Baby is the size of a plum, (s)he measured in right at 2 inches.  Baby is entering the growth and maturation stage.

Weight Gain: Still hanging out at my starting weight for no weight gain overall.

Maternity Clothes: I'm still wearing regular clothes, but I'm at that stage where I look like I have a little bit of a beer belly.  My mom took me maternity clothes shopping, but none of the stores in their town had maternity clothes.  We ended up going through shirts on clearance and she bought me 4 shirts in bigger sizes than I'd normally wear.  They should last me through until I get really big and will make me feel less fat and frumpy now and after Baby is born and I still have a belly.

Sleep: For some reason I'm having a hard time falling asleep.  We'll go to bed and once Ty falls asleep I read for a while to help me fall asleep.  I'm still taking a 30 minute nap during Carter's nap time.  I'm hoping soon I'll be able to go without and get a bit more done while he's sleeping.  I had a dream I went into labor at 26 weeks which of course made me a bit more nervous about preterm delivery.  Now that I know I have placenta previa I'm a bit more worried about it, but I know it is very likely that the placenta will move on it's own.

Symptoms: I've been feeling a lot better this week.  I'm starting to get my energy back and am getting a taste of the 2nd trimester surge.  The craziest part is that I didn't realize how poorly I actually felt until I started feeling better.  I had some light cramping throughout the week.  On Saturday I had a few really strong cramps that felt like contractions.  They stopped me dead in my tracks and I couldn't talk.  Of course I totally freaked out, but after 2 cramps they went away and they were not accompanied by any bleeding.  I was thankful we had a doctor's appointment on Monday so I would be reassured everything was okay.  I keep forgetting to list that when I get really hungry I feel like I'm going to sneeze once I start eating, but I never sneeze.  It's so strange.

Running: My weekly mileage this week was 21 miles.  On Saturday I ran my 11 mile long run.  It went well, but wasn't amazing like my 10 mile run a couple weeks ago.  I was a bit slower, but hit 9:25 pace which I was pleased with.  I had no hip or round ligament pain during or after the run.  At our doctor's appointment we found out baby's placenta is covering my cervix.  The doctor said it is still safe for me to run and I can even do long runs.  He freaked me out a bit when he said his only concern is that I'll get out 6 miles somewhere and start bleeding and have no way to get to the hospital.  I think he was referring to later on if I still have placenta previa, but I decided to nix the 12 mile long run I had planned for this weekend.  I'll stick with this past weekend's 11 mile long run as my last long run and then be very careful during the half-marathon.  After that I'll scrap long runs until we find out whether the placenta has shifted or not.

Food Cravings: Still loving macaroni and cheese.  I've been all about broccoli cheddar soup and yellow mustard.  I look forward to sandwiches for lunch just so I can slather them with mustard.  I typically don't like mustard and I'm talking slather them.  To the point where my eyes twitch a little bit from the sourness of it all.  It's strange, but delicious.

Food Aversions: Same things: barbeque, eggs, spinach.  I can still eat fried eggs.  Scrambled eggs are what get me.  It's mostly seeing them.  I had fried eggs while Ty ate scrambled eggs and I couldn't look at them.

Movement: We didn't see the baby move during our ultrasound like I was hoping we would because our doctor moved so quickly.  I think part of it was the angle as well.  With Carter we had a transabdominal ultrasound at 12 weeks and this time we had a transvaginal ultrasound.  It appeared that baby was sucking his/her thumb which was adorable.  Baby is already like his/her brother! 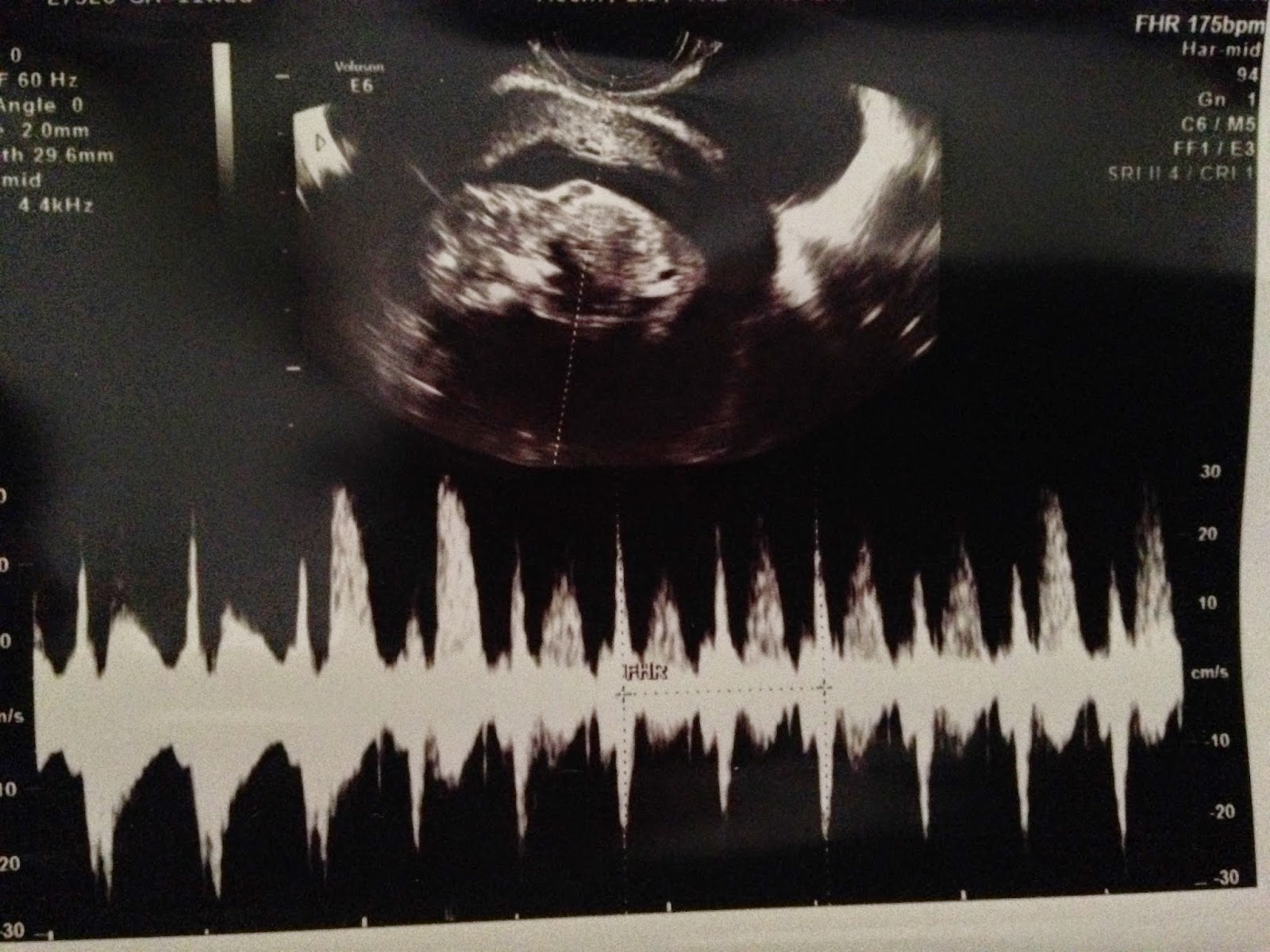 Best Moment of the Week: Seeing the baby on the ultrasound was so exciting even though partway through the ultrasound we were shocked by the news that I have placenta previa.  My 10 year high school reunion was on Saturday.  There was a picnic for families in the afternoon and a dinner reception in the evening.  At the picnic I got to hold a sweet, little 2 month old.  It was the best feeling to hold such a tiny baby.  It made me so excited for our baby to come.

Currently Loving: Looking at the ultrasound pictures of our sweet baby sucking his/her thumb!  Up until now I haven't felt the baby was a boy or girl either way.  Typing this post I keep almost typing she and her.  I'm starting to lean toward baby being a girl.  It will be fun to see what we are having in 4 weeks!

Miss Anything: Nothing really.  Most everyone was drinking at the dinner/reception for our reunion and I didn't wish I could at all.

What Big Brother is Up to This Week: When I showed Carter the ultrasound pictures after our appointment he pointed at the baby and said "baby!"  When I asked him where the baby was he took off running and brought me a picture of himself as a baby that I have framed and out in the kitchen.  My Week 12 Bumpdate with Carter.  I keep looking back at my bumpdates from Carter and feeling bummed that I don't look as pregnant as I did with him.  But then I remembered that back then I was working and didn't have time to do them in the morning so we did them in the evening right before dinner and sometimes forgot until after dinner.  My belly is definitely much bigger in the evening! 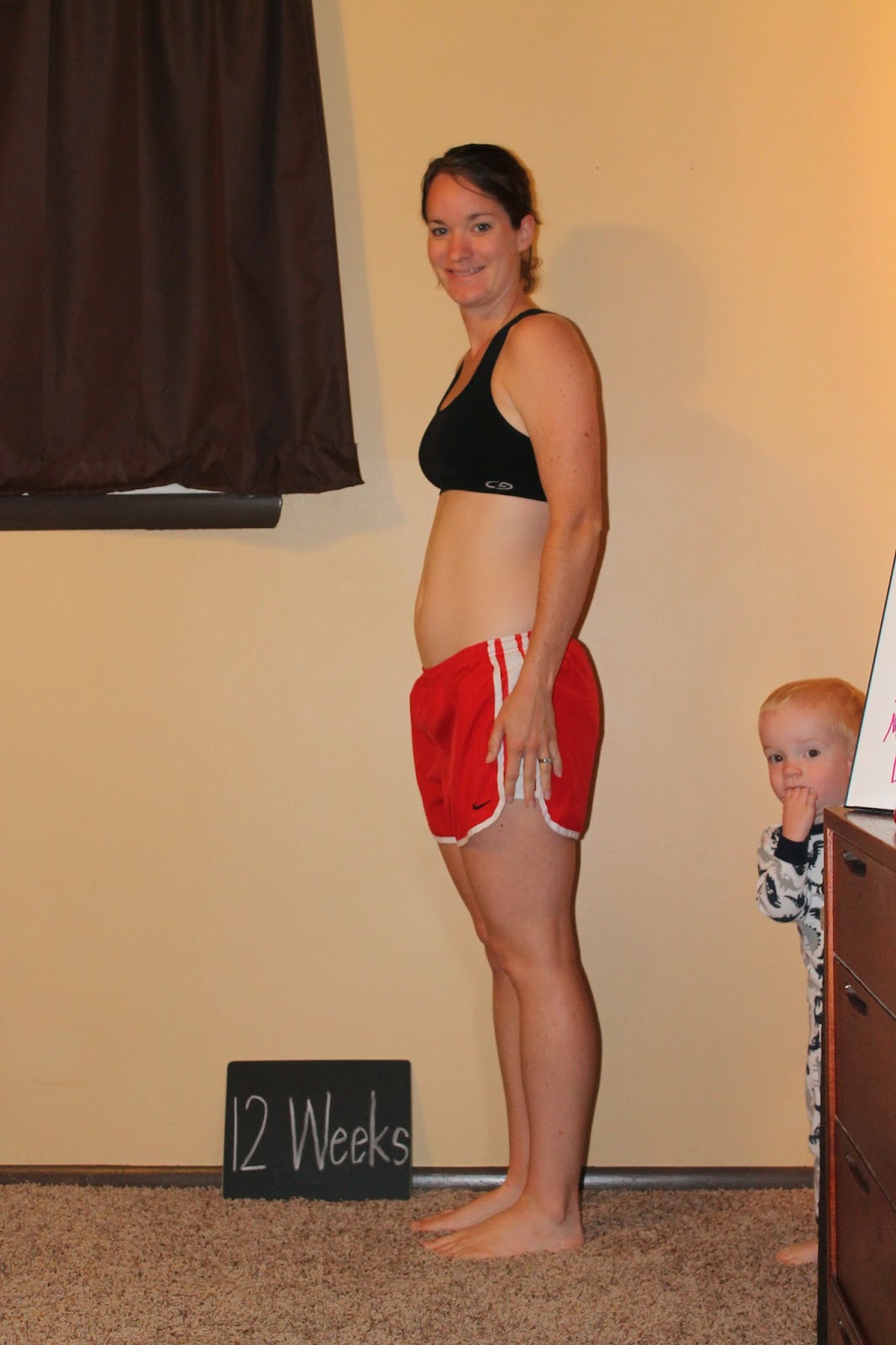 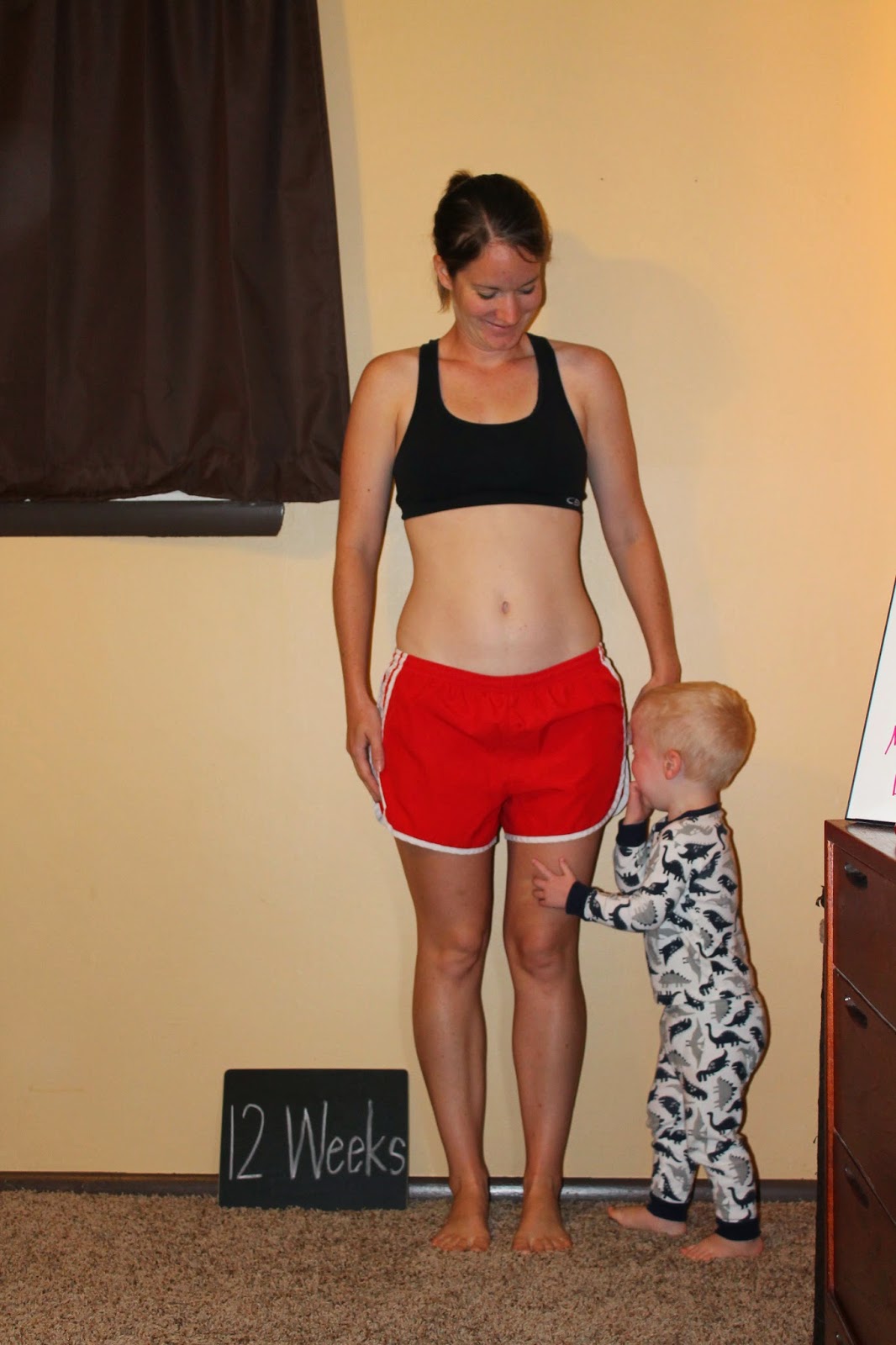 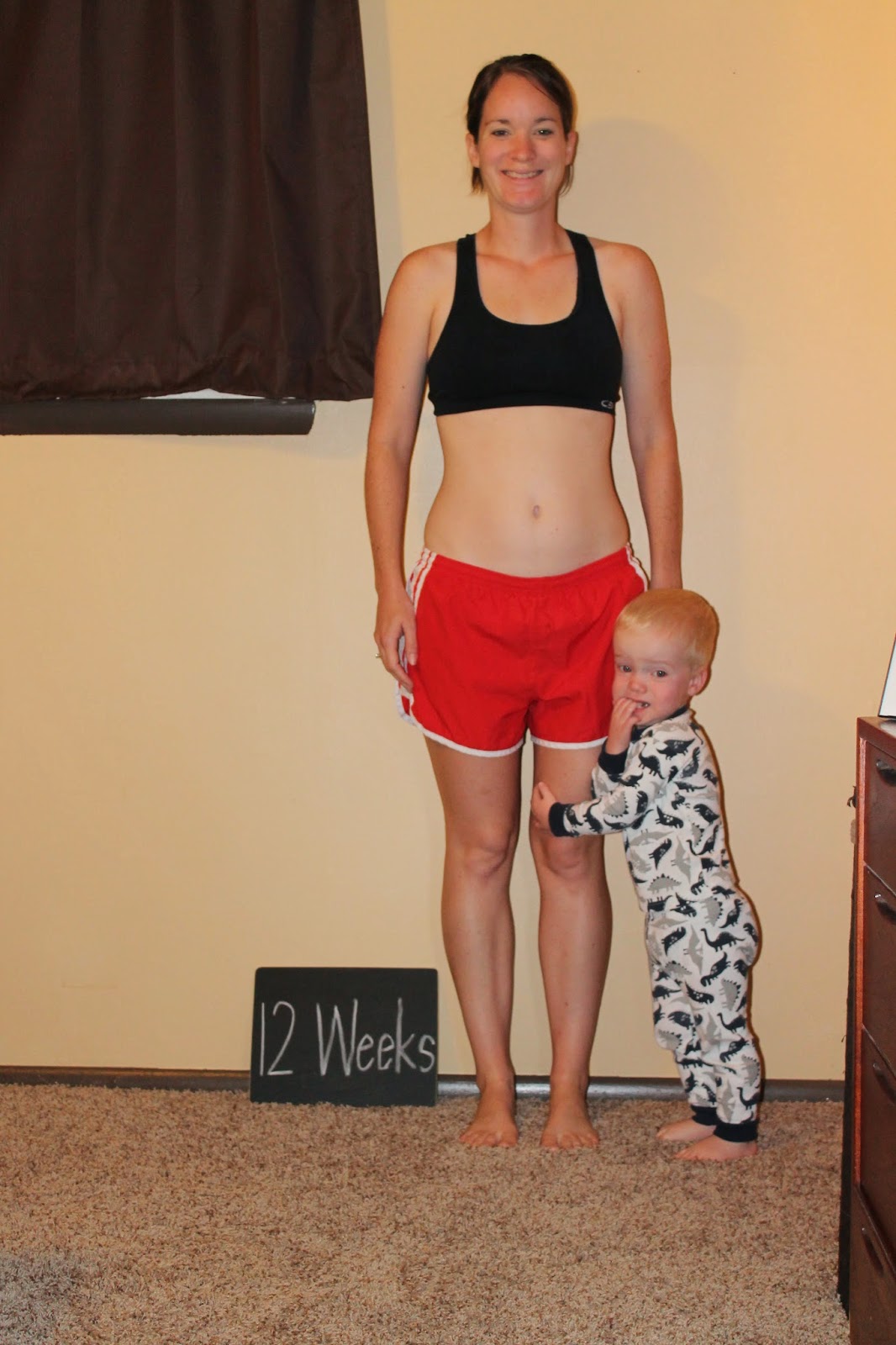 Posted by Liz Runningmomma at 11:07 AM