Carter and I began our New Year's Eve at home together.  I felt so lucky spending another day at home with him!  I put him in an extra adorable outfit for the occasion.  We read and played all morning and then he went down for a nap.  Ty only worked a half-day so he was home around noon to eat lunch with us. 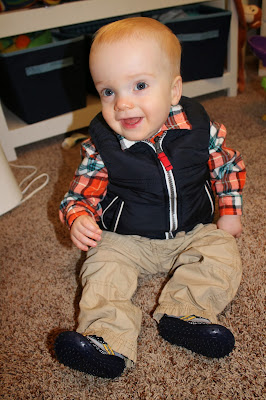 After lunch we took Harper on a walk with Carter in the stroller.  It was so nice to spend some extra time with Ty.  We had the chance to talk and joke with each other.  Shortly after we returned home Ty headed out to get a haircut.  While he was gone my parents arrived and then my brother, Jeremy, came a bit later.  We all went out to dinner at Panera.  We wanted to eat a light dinner since we were racing later in the night.  Carter made a huge mess at dinner.  There wasn't a bib in Ty's diaper bag and sitting in a high chair with no tray always leads to a bigger mess than usual.

At home we sat around and talked for a while before we needed to leave for the race.  My parents, Jeremy, and I were all signed up for the Race Into the New Year 5k.  The race begins at 11:45 pm so you are running as it changes to the next year.  I ran the race back in 2011 with Ty and my parents.  We were debating whether to sign up for it last year since my due date was January 9th and decided to sign up race day if we did run.  Thank goodness we didn't sign up ahead of time because we had a new born on New Year's Eve last year!  Ty offered to stay home with Carter since he was registered for a race the following day.  More on that race to come tomorrow.
I'll start the race re-cap off by saying it is the most fun race I have ever run.  It is just a blast.  The atmosphere, running through the dark, knowing the new year is starting as you sweat your way to the finish.  It is just awesome.  We also got blinky light rings and New Year's hats.  The race had 500 runners so there were quite a few people, but it wasn't too packed.  Jeremy and I jogged a mile warm-up together.  I was feeling great during the warm-up which was exciting.  My training has been a bit blah since the Jenks Half-Marathon we ran in November.  I had 2 weeks of just two or three runs and hadn't done speed work in a while.  I wasn't sure what to expect for the race so I decided to shoot for 22 minutes.  I figured I'd go out in 7:00 pace and try to pick it up from there. 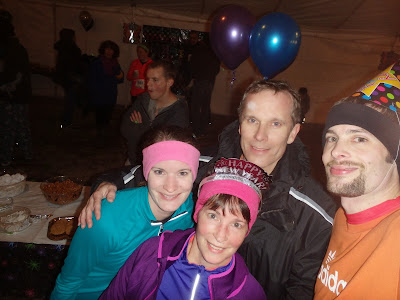 We took off and I was feeling great.  I peeked at my Garmin a couple of times during the first mile and saw I was averaging under 7:00 pace.  My first mile was 6:52.  I was afraid I would really struggle during the 2nd mile, but I figured I'd maintain the pace for as long as I could.  The race really thinned out after the 1st mile and I could only see one person quite a ways ahead of me.  I just kept trying to push the pace a little bit.  I could hear someone coming up behind me for about half a mile and when he finally caught up to me he had a really bright light which was nice because I could see the course really well.  My 2nd mile was 6:47.

During the 2nd mile they started shooting off fireworks indicating it was midnight.  I was crossing a bridge over the river as the fireworks were going off.  It was beautiful watching the fireworks both in the sky and reflected in the water.  My plan was to run my last mile the fastest so I started pushing as much as I could.  I ran my 3rd mile in 6:44.  That put my finishing time at 21:20, an average of 6:48 per mile.  I was pleasantly surprised that my time was only 15 seconds slower than my 5k in November.  Now I'm optimistic that I can break 21 minutes later this winter or in the spring!

After the race Jeremy and I ran around with our noise makers cheering on runners.  It was a blast!  I barely had time to change my clothes in the car and on my way back heard them announcing top overall finishers for awards.  I was rounding the corner as they announced I had finished 3rd overall female.  I weaved my way through the crowd to get my award and saw my mom and Jeremy standing at the front of the crowd.  When I met up with them I saw Jeremy had finished 3rd overall male.  We both got New Years hats, a medal, and a gift card to a running store.  We stayed for all of the awards.  I was 2nd in my age group, Jeremy won his age group, and mom and dad were both 3rd in their age groups.  We left to head home a little bit after 1:00 am.

Ty was waiting up for us when we got home so we could all cheer the new year together.  We drank a glass of champagne, ate some pie, and then I showered and got ready for bed.  When I finally made it to bed it was 2:15 am.  It was the latest I had been up in an extremely long time!  I knew Carter's 6:30-7:00 am wake up call was going to come WAY too fast! 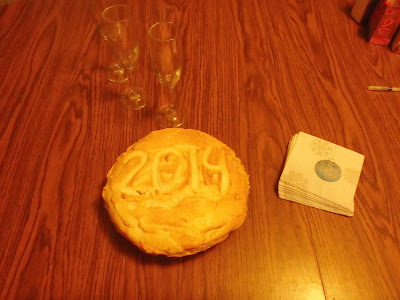 Posted by Liz Runningmomma at 7:11 PM