Poor little Carter man has been coughing and stuffy for a little less than a week.  I knew it was just a cold and since he wasn't running a temp, I was just waiting for it to run it's course.  Yesterday he started running a low-grade temp between 99.4-100.4 degrees.  I became worried he had an ear infection.  The last time he had a cold he ended up with an ear infection due to the drainage moving into his ears. 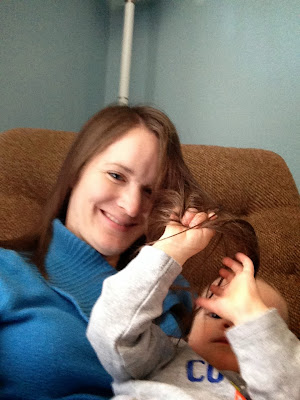 I took him to the doctor today so they could check his ears.  When the doctor walked in I realized there was a stand in for our normal doctor.  He must still be on vacation.  Our doctor really has a way with Carter.  Carter has never struggled away from him as his ears were checked before.  This time he pitched a fit when the doctor tried to look.  I'm sure it was also because his ear hurt so badly.  She had me pick him up and hold him so she could see into his ear.  He still turned his head this way and that so she couldn't get a good look.  The nurse offered to help restrain Carter so we were back to that awful situation like last time.  The nurse restraining Carter while I held down his legs and struggled to hold in tears.  I could feel that awkward feeling bubbling up inside me where I was either going to laugh or cry.  Luckily I did neither and the doctor confirmed what I was afraid of, Carter has a double ear infection. 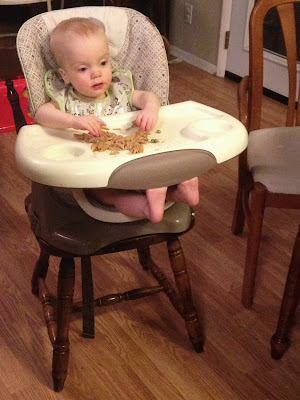 This makes Carter's 3rd ear infection in 12 months.  That's not the best record, one ear infection every 4 months.  His last ear infection was in November.  Our regular doctor told us during Carter's previous ear infection that we'd see how this winter goes and then decide if Carter needs ear tubes.  I'd say it's not off to a good start.  I hate to see Carter have surgery, but if getting tubes would be the best thing for him of course I would do it.

We've had a rough go of it with ear infections.  His first ear infection didn't clear up with medication.  I had to take him back into the doctor and he gave Carter shots since the medicine didn't work.  During his next ear infection he broke out in a rash and we discovered he was allergic to Amoxicillin.  I'm crossing my fingers, my legs, and my toes that this one will clear up without any incidents or complications.  Wish us luck!
Posted by Liz Runningmomma at 7:27 PM