What I'm Loving About Carter These Days

I love how Carter is changing this month.  We are getting glimpses of other personality traits.  When I try to give him a food he doesn't want, he makes an unpleasant noise as he tosses the food on the floor.  He's also picking up new tricks.  I'm still obsessed with how he wrinkles his nose when he smiles, but have yet to catch it on camera.  Now he's all about sharing food.  He will hold his hand out, offering me food.  I'll lean in and eat the food.  Then he eventually starts feeding me out of his own mouth.  It is absolutely adorable!  You know that saying, "One man's trash is another man's treasure"?  Well, Carter's version of it is, one man's trash is the same man's treasure!  He drops unwanted food which ends up in his bib and then when I pull the tray off his high chair, he eats the food he hadn't wanted earlier. 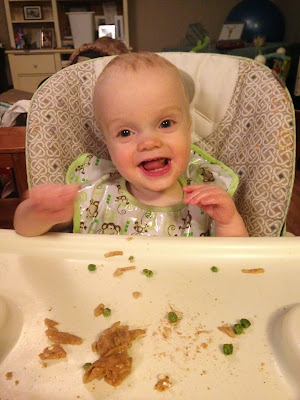 He's getting around much better now.  He's still working on his balance, but is able to walk with some help.  We hold his hands to help him walk around.  He can also walk while holding onto his car which converts into an almost upright position.  He's still a bit unsure but is gaining confidence every day.  He's started cruising while holding onto the furniture which he was afraid to do before.  There have even been a couple of times where he let go of the furniture and stood for a little while.  I think walking is in our near future!  I am super excited about it and am really looking forward to those first unaided steps!

All the sudden he's decided he doesn't want to lay down for diaper changes anymore.  He almost instantly rolls over to his tummy and either takes off crawling or pushes up to a stand.  When he's standing he stares out the window and holds onto the blinds for support.  When he's wearing disposables it's pretty easy, but when he's wearing cloth diapers with all the snaps...  It doesn't go very well!  I'm thinking it's about time to retire the changing table and convert it into a bookshelf.

Mr. Man still loves to help me with laundry.  And when I mean help, more like be counterproductive.  When I'm folding, he pulls folded clothing out of the laundry basket.  When I'm switching laundry over from the washer to the dryer he shoves random things into the dryer.  One day he found a dead pill bug from who knows where and put it in the dryer (luckily I saw him and pulled it out).  Then he reached in and pulled the drier sheet out.  I can tell he wants to help and I know he'll be a great laundry helper when he gets older. 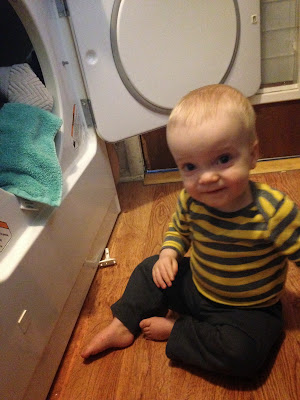 Dancing has to be my favorite thing he does.  I crack up every single time.  He is just too cute shakin his groove thing.  I just wish it would last longer.  When he hears a song he dances for the first 15-30 seconds and then he's done.  When the tv is on in the background he'll dance to commercial jingles.  He loves his My Pal Scout and the songs.  He also loves the songs that play on his car and his Laugh and Learn Learning Home.  Sometimes he pulls up on furniture to really shake it by bouncing up and down.

It does my heart good how much he loves books.  When we play in his room his favorite thing to do is crawl over to the book shelf and pull books off.  He loves flipping through the books, reading to himself.  I used to take Carter's fingers and run them over the pages of touch and feel books.  Now he'll reach out to feel the special parts of the pages on his own.  He especially loves and notices pages with fake fur.  His favorite touch and feel books are Pat the Bunny and That's Not My Bunny... Yesterday he pulled a touch and feel book off the shelf and flipped through the pages touching each of the special parts of the pages.  It was so cute to watch! 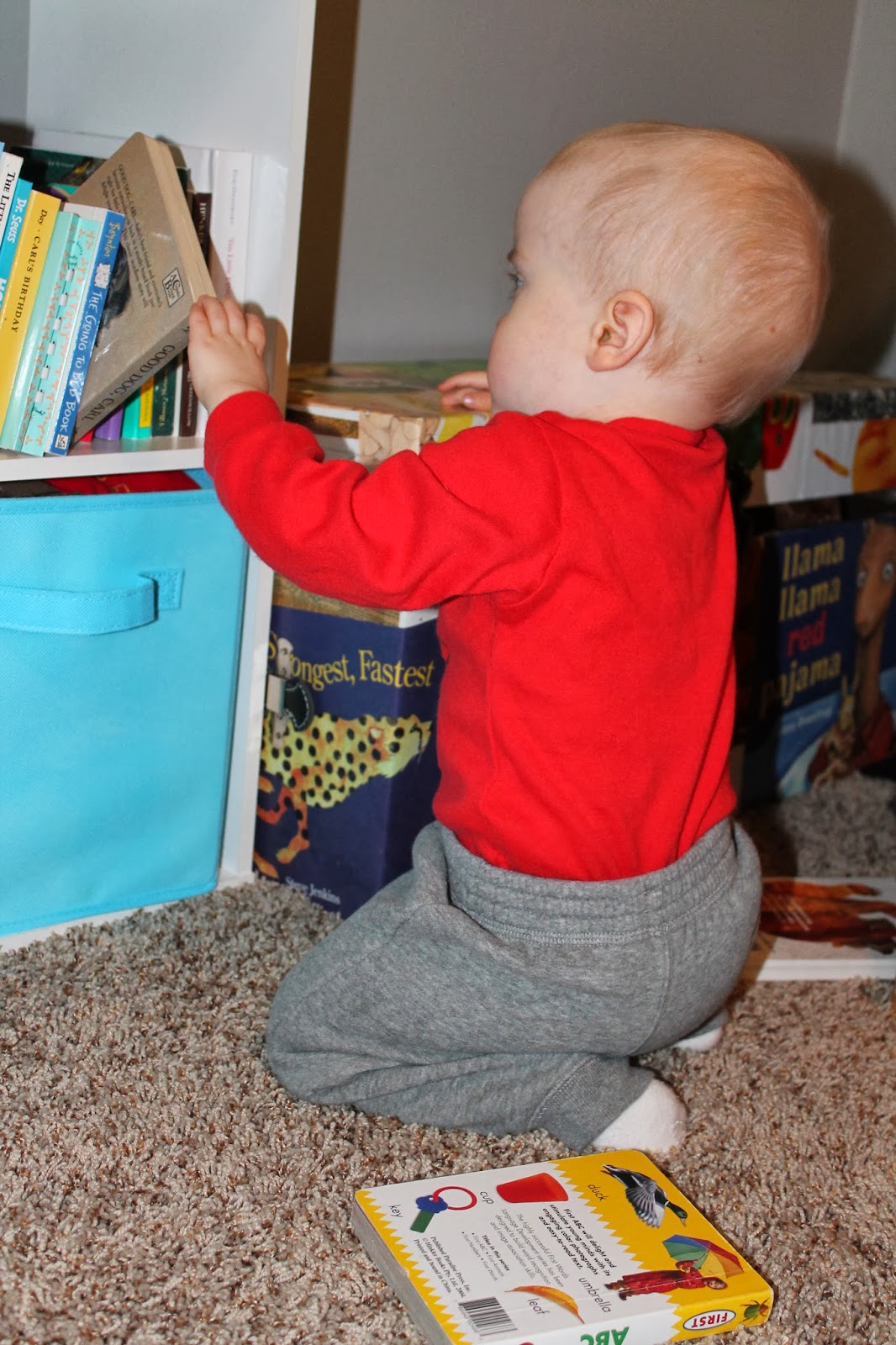 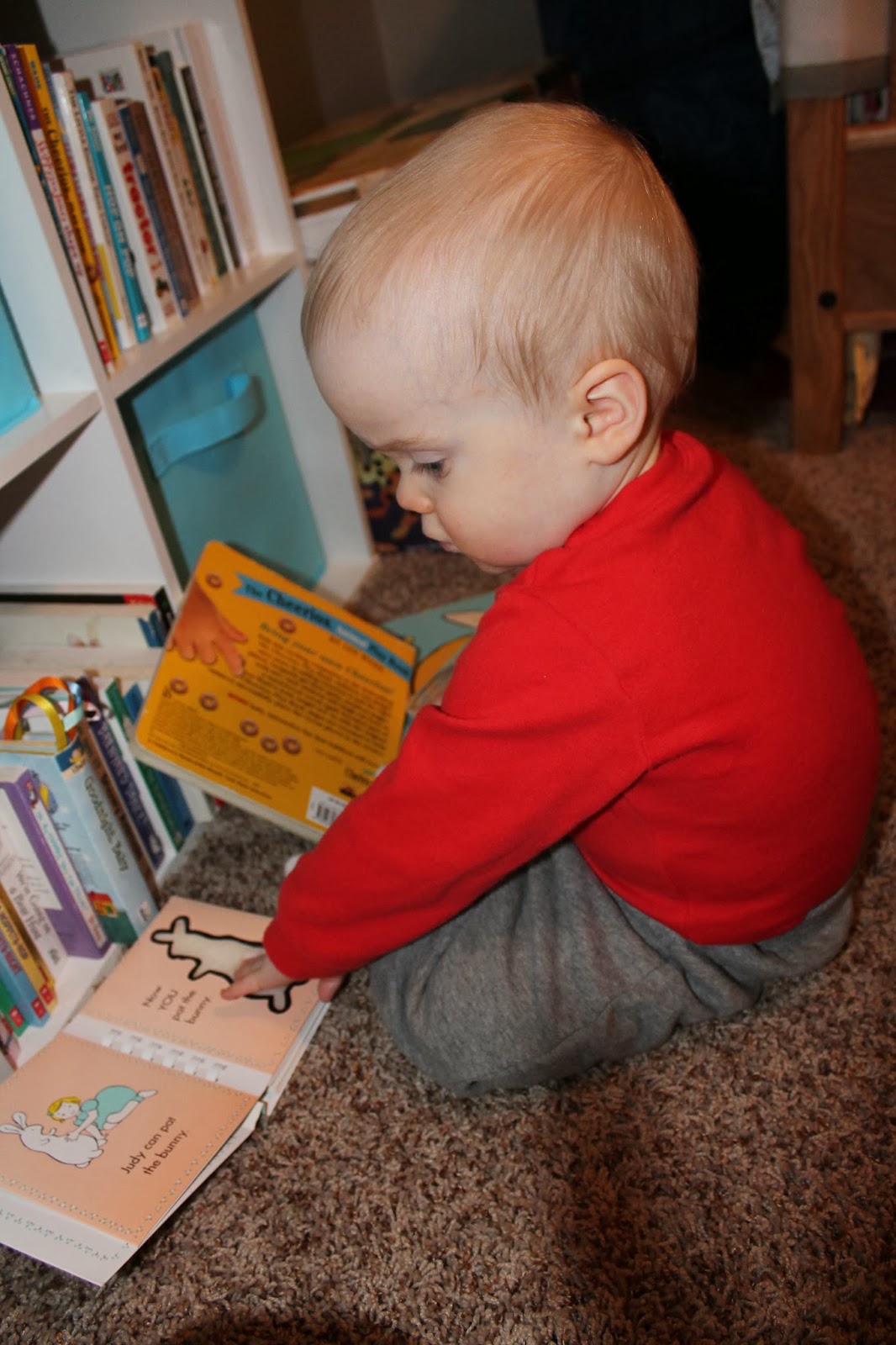 Carter is so much fun and picks things up so quickly.  Just in a few short days he's gone from wobbling along as he walked with his upright car to steady walking as he cruises on the couch.  I love my little man and am so excited to see what he'll be up to next!

Posted by Liz Runningmomma at 8:09 PM