Ty was feeling about 75% better today throughout the day so we decided to venture out to the zoo.  I invited Jeremy to come, I'm already loving his new schedule, and he agreed to join us.  When Carter woke up from his nap I fed him, changed his diaper, and loaded the car while Ty showered.  As I came back inside I heard Ty throwing up in the bathroom again.  Of course Carter took off to the bathroom to check on his daddy.  He's such a caring son!  After that incident Ty opted out of the zoo trip.  I'm just going to share the highlights of our trip with some pictures and call it a day. 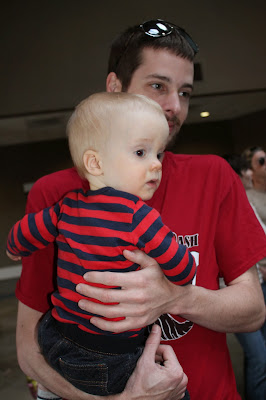 We were looking at some treeshrews.  Jeremy and I both saw one climbing in a tree and I pointed it out to Carter.  Instead of looking over, Carter's concentration remained focused on a different tree.  He screeched and pointed at the tree and then I noticed he saw a treeshrew quietly sitting in the tree that both Jeremy and I had missed because we were distracted by the shrew that was moving.

The next habitat included bushbabies.  One was up in a tree and the other was down on the ground right against the glass.  The area was dark and Carter wasn't too interested in the animals.  I asked Jeremy to put Carter down on the ground to see the bushbaby up close.  The moment he looked up and saw the bushbaby he screamed and then started to cry.  It must have surprised him that it was so close to his face!

We were looking at some animals and I heard a little boy behind us tell his dad he found the tiger.  I turned to look at him and he was pointing at Carter.  It was so adorable because Carter was wearing his tiger jacket with his hood up. 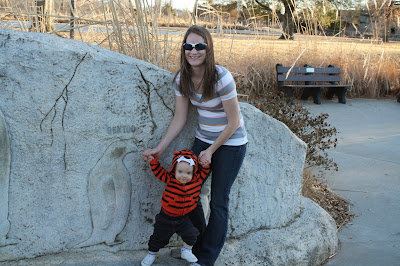 Seeing how much more alert and interested Carter was this time makes me so excited to go again in a few months.  It will probably take that long before we have weather like today again!  It got up to 70 degrees.  It's just Ty's luck to be terribly sick on a weekend where the highs are 57 and 71!  But of course he was feeling great on the day we set record lows and the morning started off with temperatures in the negatives.  Luckily the rest of the week looks to be pretty nice.
Posted by Liz Runningmomma at 8:02 PM

Email ThisBlogThis!Share to TwitterShare to FacebookShare to Pinterest
Labels: zoo