This evening Ty's parents called to FaceTime with us and didn't realize Carter's bedtime has changed which made me realize there are some new developments with Carter I haven't shared on here.  One of our biggest changes has been bedtime.  He used to go to bed at 8:00 but started waking up at 6:00 am instead of 7:00 and I was worried he wasn't getting enough sleep.  So I moved his bedtime up to 7:30.  I was really hoping we wouldn't need to move his bedtime up to 7:00 because that meant less time with him in the evening after work, but he was struggling and tired so we did it.  Now he's down and asleep between 7:00 and 7:20 at night.  It's really hard on me and sometimes I cry after I lay him down.  While I hold him and give him his last cuddles for the night I slowly feel the shift in my chest until I lay him down and have the empty, sad feeling that I carry around all day at work.  My happy, fulfilled moments are so short these days.  Most mornings he wakes up between 6:30 and 7:00 so I get an hour or hour and a half with him before dropping him off at daycare and then I get 3 hours in the evening.  It's rough.

He now stretches up onto his tip toes to see things.  This evening while Ty and I were eating dinner, he held onto the edge of the table and pulled up onto his tip toes to get a good look at what we were eating.  I've been trying to get a picture of him on his tippy toes, but haven't been successful.  It's so hard to determine when he will do it and then it's usually such a fleeting moment I have a difficult time snapping the picture before he plops down flat footed again.  I'm not sure where this next thing came from, but he sticks his tongue out and covers his chin.  Usually this occurs as he is crawling fast or working hard on something.  Ty sticks his tongue out when he's concentrating and I've even seen pictures of him doing it as a child, but he does it differently.  I've also had a difficult time getting a picture of Carter doing this.  I've only gotten one picture and it's not a good one, but it gives you an idea! 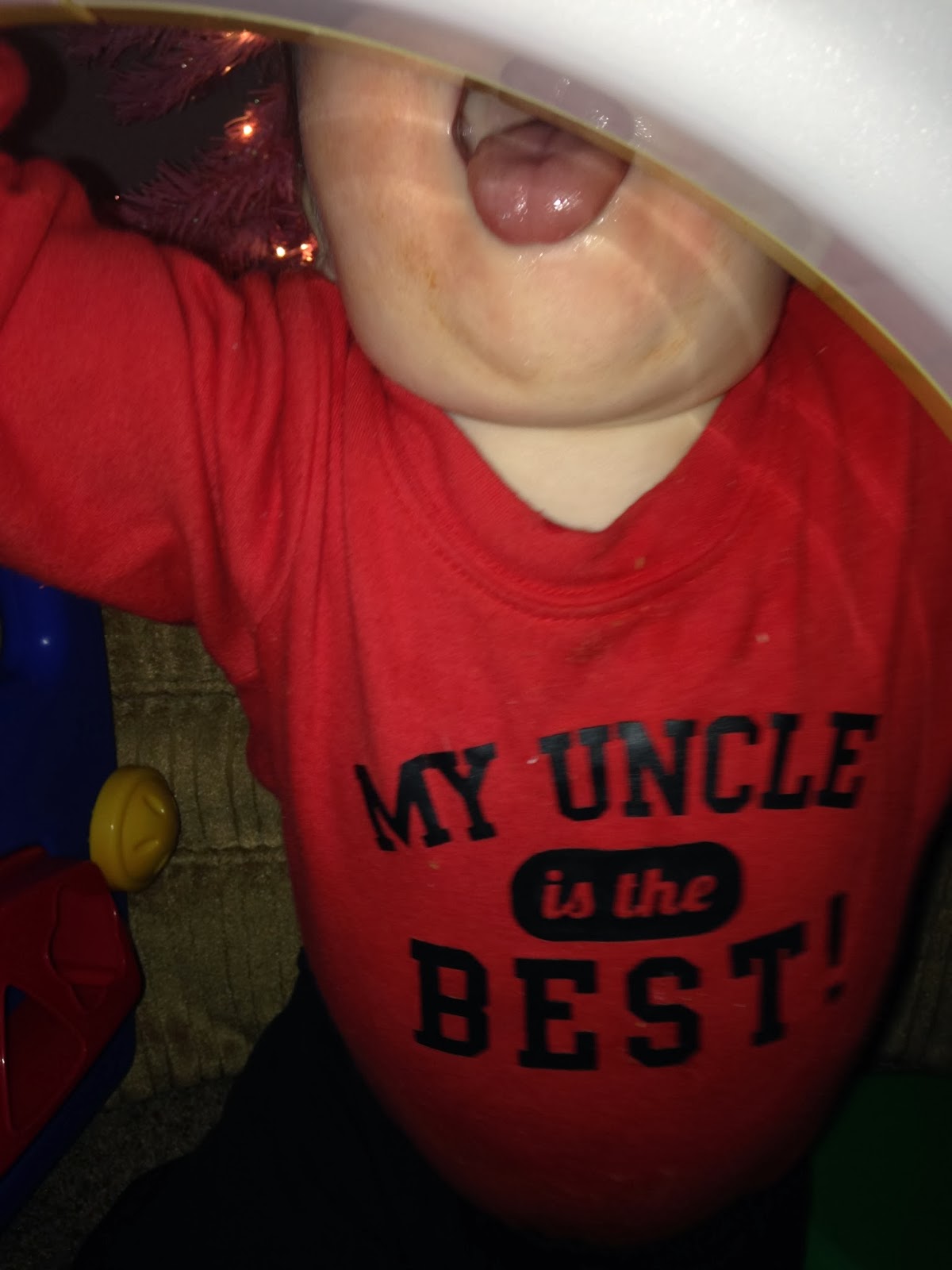 Talking is starting to happen little by little.  He's said "hi dad" to Ty when he walked in a room.  He constantly says mama when he wants something and I'm walking away and doesn't stop until I walk back over to him.  This evening when FaceTiming he said bye and waved to his grandma and grandpa.  Most things he's said he repeated right after someone else said it, but mama is something he definitely has down!
Posted by Liz Runningmomma at 5:49 PM