Carter and I had another fun morning together before everyone else woke up.  I opened the curtains in our living room and Carter had a blast dog watching.  While he was looking out the window I was snapping pictures and happened to capture him push up onto his feet.  I was so excited that he pushed up to a stand.  When the dogs wandered away from the window Carter crawled off to his toy box and started pulling toys out.  He seemed like such a big boy, especially right after pulling up to a stand! 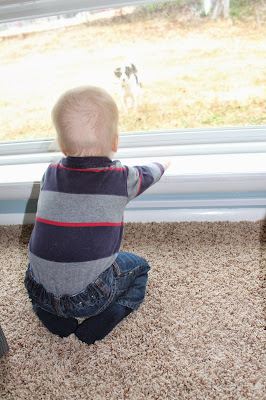 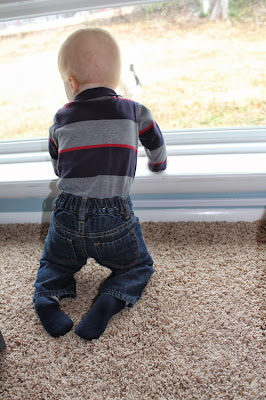 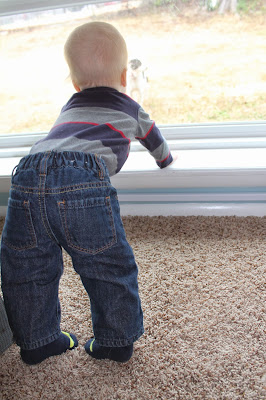 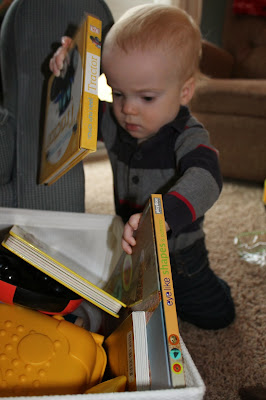 My parents' dog, Zuma, was inside and he loved crawling all over her.  I took his hand and showed him how to pet her nicely.  When I took my hand off he continued to pet her rather than slap her and grab handfuls of her fur.  I was so proud of him!

Ty put Carter down for a nap later in the day and called for me to come see him.  I ran in to find Carter standing in his crib holding onto the crib rail.  I took Carter to go rock for a bit while Ty and my dad lowered his crib.  Carter seemed so old with all the pulling up and standing up today!  My dad kept holding Carter's hands, helping him pop up to a stand, and then walking along with him.  Carter may have been a late crawler, but I have a feeling his timing will be closer to average when it comes to walking.

Posted by Liz Runningmomma at 7:32 PM