Friday night my dad and I hung streamers in Carter's doorway for his birthday.  I woke up in the middle of the night so excited to see what he thought that I had a hard time falling back asleep.  It was the most excited I had been since the night before Ty and my wedding.  I finally fell back to sleep and when Carter started to fuss in the morning I was out of bed right away to head in and play with my birthday boy! 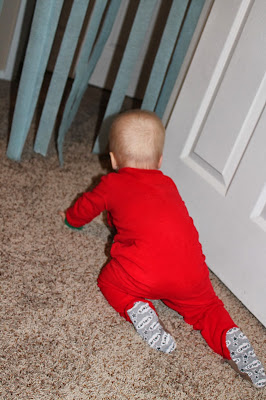 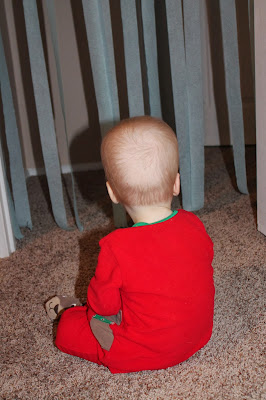 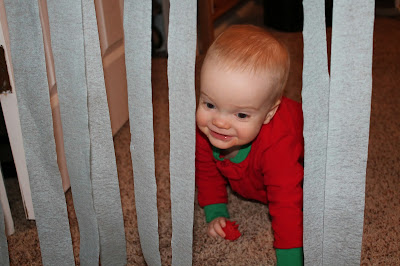 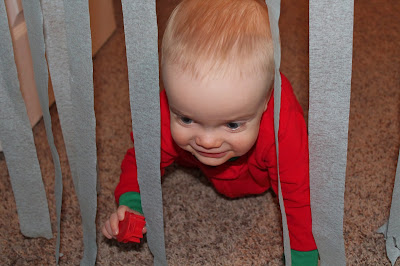 After playing with the streamers for a while we headed in for a special birthday breakfast.  His breakfast started with a banana cut in half length-ways and then cut in half width-ways.  I put candles in the banana, sang him Happy Birthday, blew the candles out for him, and then he chowed down.

My dad woke up after breakfast.  We played with the streamers some more, read some books, and then everyone else started waking up.  It was the perfect morning!  Carter went down for what I figured would be a short, little nap before his party.  He was still asleep forty minutes later when I needed to head to the party venue to decorate.  My parents stayed at home with him while he napped and I headed out to decorate. 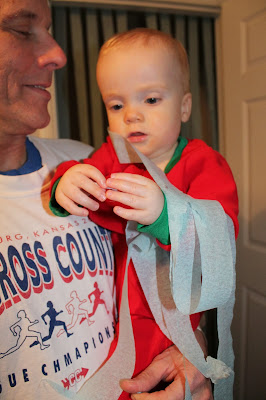 Carter's party had a bow tie/tie theme so we kept his outfit simple.  He wore jeans, a white long sleeved onesie, and a tie my mom made for him.  He looked so handsome and grown up with his tie on!  Ty's parents and my dad also chose to wear ties to match the theme.  We had a perfect-sized small party with about 20ish guests.  Everyone got lots of time with Carter and there was plenty of room to mill around and chat.
I was so excited to see what Carter would do with his cake!  The bakery made a smash cake for him which he posed with, but couldn't eat since it had egg.  We made a different cake for him to dig into using an eggless recipe I found here.  The cake was basically a fancy banana bread so it was a little tough for him to sink his fingers into.  He pressed his fingers down into the icing and ate quite a bit of it.  Eventually I smashed a hole into the cake so he could get to it.  He ate some of the cake, but was pretty full of icing by that time.  It was so sweet because my friend, Erin's, 2 year-old son, Hayden, brought Carter his sippy cup part-way through. 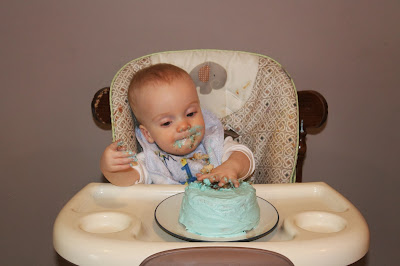 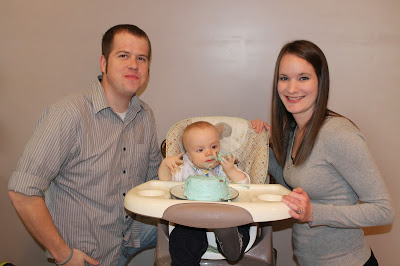 Opening presents was a lot of fun!  Hayden helped Carter and did such a great job.  At one point I said to Hayden, "You are teaching Carter how to open presents because he is watching you."  Hayden then picked up a present, started to open it, turned to Carter and said, "Watch this!"  He is such a doll!  I was impressed that Carter actually ripped some of the paper off packages and pulled tissue paper out of bags.  He stayed focused and didn't get too distracted by the toys once they were open.  He even crawled inside of a big bag to pull tissue paper out.  He was inside the bag for quite a while and came out with just part of the tissue paper.  It was so funny and of course he went back in for more! 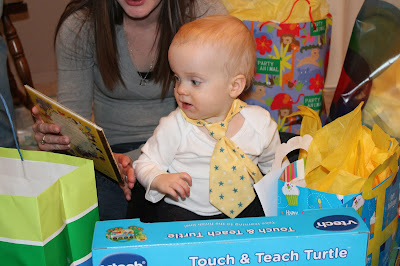 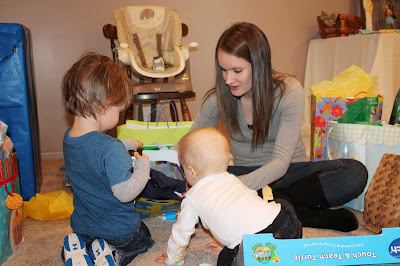 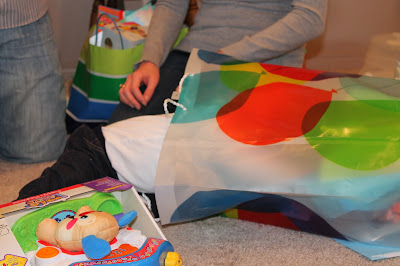 The party went by very quickly because we were having so much fun!  Most of the guests came back to our house after the party to visit and watch Carter play.  I put together his big car toy for him to play with and he played with it for a bit, but was pretty tired.  When it was bedtime he went down quickly and without a fuss, Mr. Man was worn out!  I'll post more later with party decor and planning details. 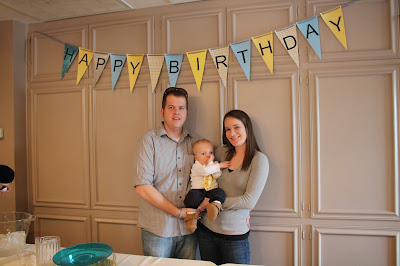 Posted by Liz Runningmomma at 8:10 PM