Christmas morning Carter woke up at 7:00 am.  I got up with him and he ate breakfast first thing.  Then I changed his diaper and switched him over from his overnight jammies to his Christmas jammies from Uncle Paul and Aunt Amanda which he wore all day long.  Grammy and grampy woke up and we all went in to play with Carter's Laugh and Learn Learning Home from grammy and grampy.  He had a blast and played with it all morning until everyone else woke up around 10:00 am. 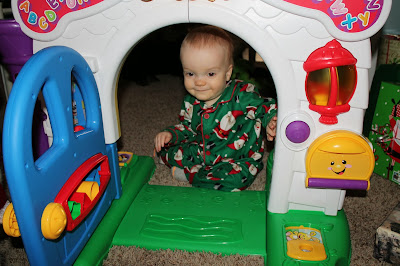 We all went in to see what Santa brought and checked out our stockings.  Then we sat down for egg casserole and muffins for breakfast.  And of course I grabbed some chocolate from my stocking to go with it!  Carter ate a morning snack of yogurt and blueberries while we ate breakfast and then he was tired.  My dad was very excited that he got to rock Carter to sleep for a nap. 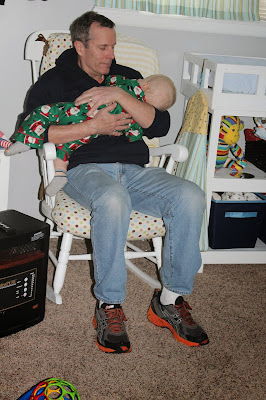 While Carter napped the rest of us opened our presents.  But the real fun began when he woke up.  All 6 adults sat around and watched as he opened his presents.  Wrapping in tissue paper turned out to work really well.  Carter loved ripping it off.  He would rip some tissue paper off the present, hand it to his Uncle Thomas, and either take it back or rip off more and start the process all over again.  He got lots of books, a few toys, and some clothes. 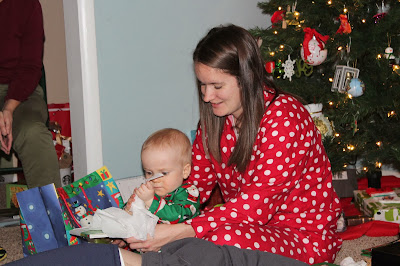 That evening we read books, snacked some, and ate enchiladas for dinner.   Carter tried the enchiladas and loved them.  It was his first taste of Mexican food and he was definitely a fan! 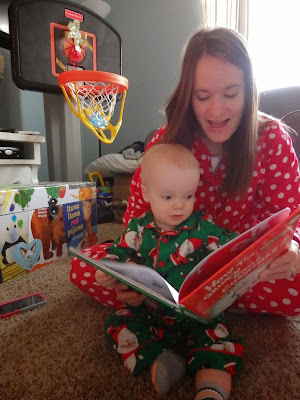 Seeing how much more fun Christmas was this year compared to last year, I'm even more excited for next year.  Watching him grow up is hard, but it is also so much fun and exciting.  He went from laying in a bassinet surrounded by presents to actually unwrapping presents on his own a year later.  Next year I picture him being excited to open presents and actually understanding what's going on a little bit better.

Posted by Liz Runningmomma at 6:30 PM