When it was time to plan Carter's birthday party I didn't like any of the theme ideas I came across.  Then I saw a picture of a baby smashing his birthday cake wearing nothing but a diaper and a tie.  I had to have that picture of Carter.  I could imagine how adorable Carter would look!  That's when I decided on a tie theme and thought it would be perfect since his middle name is Ty.  As I started searching for decorating ideas with ties I kept seeing bow ties and thought they were so cute.  So then I went with a tie/bow tie theme and color-wise we went with his bedroom colors: light blue, yellow, and grey or white.
Cake Table:
We ordered the cake from the same bakery that made Ty and my wedding cake as well as Carter's gender reveal cake.  Along with the cake we had tie and number 1 cookies.  My mom took packages of candy and put ribbon around them to make the candy look like bow ties.  My mom also put napkins with ribbon around the silverware to make them look like bow ties.  I ordered monthly pictures of Carter and hung them with number circles I had made on a window frame the owner of our venue provided. 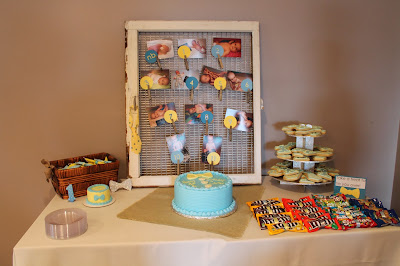 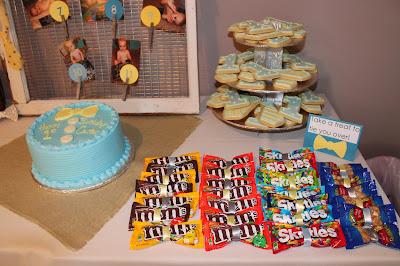 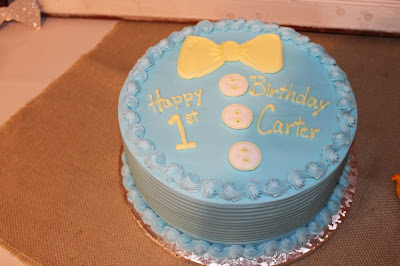 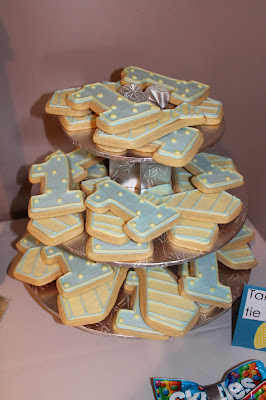 Centerpieces:
My original plan was to have a blue mason jar filled with daisies as the centerpiece.  We found blue mason jars at Target and I was really excited.  We went back to the venue for a second look after the original walk-through and took a mason jar with us.  When we placed the mason jar on the table we realized it was much too small to be a centerpiece on it's own.  We came up with the idea to put straws in one with a bow tie on the front.  Ty printed a bow tie picture for me and I used it to make bow ties out of scrapbook paper.  My mom filled another mason jar with candy.  At the end of the party we gave away the mason jars filled with candy to the youngest guest, the guest who traveled the farthest, the guest who lived the closest, and the guest with the birthday closest to Carter's.  We put a bowl underneath the burlap to make the daisy mason jar taller than the others and then used board books to prop up the candy mason jar. 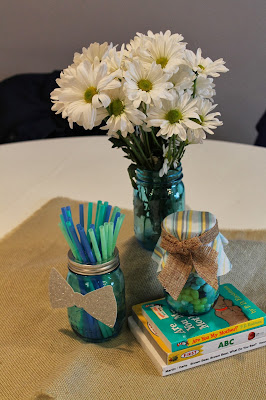 Photo Booth:
There was a little section of the venue with a cute chair and a Christmas tree decorated with blue ornaments.  We used that area as our photo booth.  I just set a mason jar filled with glasses, mustaches, bow ties, and ties I made out of scrap book paper and taped to kabob skewers on a table along with a camera and a sign.  My parents brought an empty picture frame which we set in the corner.  Everyone seemed to have fun taking pictures with the props. 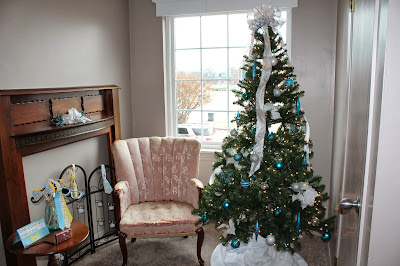 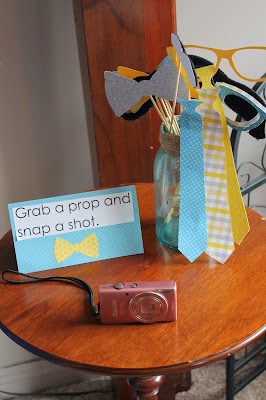 I made a birthday banner using the same scrap book paper I used throughout the rest of the decorations.  My mom made a bunch of ties and I randomly placed them throughout the room.  There were a couple pots of greenery which I placed ties on along with the door handles.  The owner of the venue had a cute decorative board which I cut out letters on scrapbook paper to make a "Happy Birthday Carter" sign. 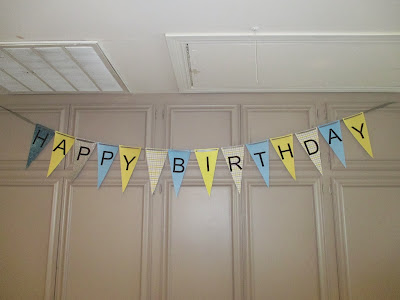 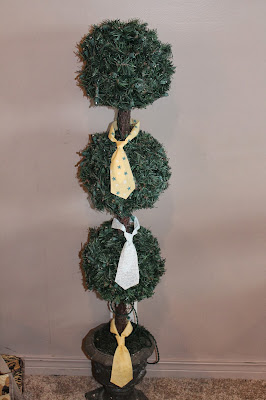 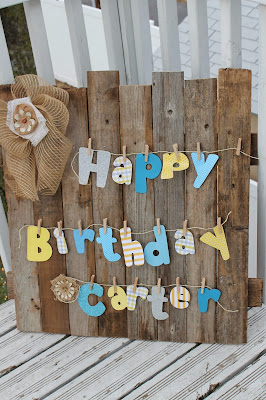 I had so much fun planning Carter's party.  My mom helped out a lot with creating decorations and Ty took over with the food.  We had a bow tie pasta salad which Ty made, Subway sandwiches Ty ordered and picked up, homemade queso Ty made the morning of, a black bean dip Ty's mom made, a fruit tray full of fruit Ty cut and prepared, along with veggies with ranch dip.  Carter had a blast and was still worn out today after all the excitement and visitors.  He took a 2 hour, 15 minute nap at daycare, napped on the drive home, and then went to bed 20 minutes earlier than normal.  I'd say all in all, his first birthday weekend was a great success!  More pictures of his smash cake shoot to come later!
Posted by Liz Runningmomma at 8:58 PM