Today was another fairly stable day. Jeremy had a few ICP spikes into the mid and upper-20's. One was when his neurosurgeon stopped by so he decided to stop decreasing the pentobarbital which is keeping Jeremy in a coma. He was on 5 mg/kg of body weight yesterday and they have decreased it down to 4.5 mg. In my estimates if they start again tomorrow and decrease it by 0.25 mg every 8 hours (the doctor said they would decrease it every 6-8 hours) it would take 6 days for him to be fully awake from the coma. I got my hopes up a little bit when the doctor first said they would be weaning him off the pentobarbital, thinking maybe Jeremy would be awake in time for my mom's birthday on Wednesday, but it is not looking like that will be the case. I'm now hoping he will be awake in time for his and my dad's birthday on the 30th. We are still pleased with his progress and this stretch of stable days. I'm so glad his ICP hasn't spiked back up into the 30's and 40's because that is really scary! There have been no further CT scans so we don't know how the hematoma is looking. He still has the rod in is leg to help pull his femur back into place as he is still not stable enough for surgery. When I visited today his ICP was around 9-11 and then spiked up into the upper teens as I was leaving. Right now it's running in the upper teens which is higher than they'd like, so his nurse is working to bring it down. His nurse last night realized his ICP doesn't spike while being moved if he has recently had a breathing treatment so last night and today anytime they needed to move him, they timed it around a breathing treatment and it worked out wonderfully! Now on to my race re-cap from our 5k last weekend...

Last year was the inaugural Runway Run 5k at our local Air and Space Museum, read about last year's race here. The race this year was on January 9th, exactly one week after Jeremy's accident. We were all signed up to run, but my heart just wasn't in it. Both my parents wanted to go out and run. They wanted to be in a group of runners and my dad had a few people from the running community here contact him regarding Jeremy's accident and he wanted to meet them at the race. I wavered back and forth about running the race, but once they said they were doing it, I decided I would too. Without Jeremy there I knew it would be even harder for them if I also didn't go. Last year Jeremy won the race and I was the first female. It was really neat to take first male and first female together so I also wanted to win again. I felt like it would be for Jeremy. 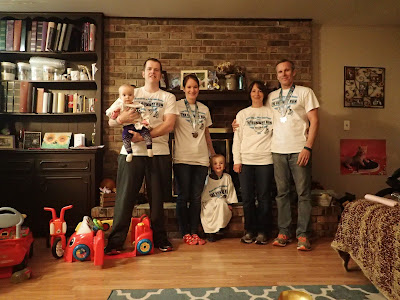 Friday night I offered to spend the night at the hospital so my parents could get some rest as they had been trading off spending the night. When I left the hospital Saturday morning it was starting to spit snow. I went back to bed when I got home around 6:30 am and when I got up at 8:00 am it was snowing so hard it was hard to see and there was a decent layer of snow on the ground. My dad called to make sure the race was still on and it was. Thomas headed up to the hospital so someone would be with Jeremy and the rest of us headed to the race. As I ran my warm-up I could tell the race would be a struggle. My legs just weren't there and the layer of snow on the ground was difficult to run on and slippery in some places. As we walked out to the start I could see the runways we were to run on were partially cleared. There were huge piles of slush, a layer of snow, and large puddles of water on the runway. We took off and ran through such a slushy mess that my shoes and socks were immediately soaked along with my tights from the knees down. I just wasn't getting very good traction and my legs were already tired. I could see one woman ahead of me as I went through the first mile in 6:38 which wasn't too much off my pace from the Race into the New Year, but it was the longest stretch of the race with the wind at our backs and the wind was really strong. 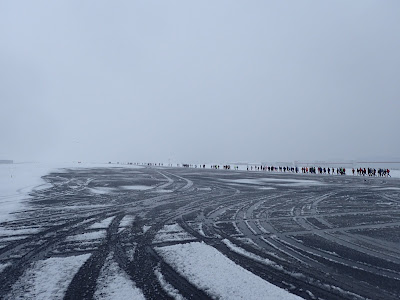 I caught up to and passed the top woman at the half-way mark and tried to pull away but she went with me. I was working hard and struggling. As I looked over at the runway next to us that we would turn onto, I remembered looking over the year before and seeing Jeremy. I knew he was winning the race and I wanted to be the top female so we could both win. It was around the same point in the race when I passed the woman in first last year. I hit the second mile in 6:55 and started working to get my last mile a little bit faster. My legs were dead, my feet were numb, and I was both physically and emotionally exhausted. I kept repeating to myself over and over, Jeremy isn't giving up, you can't give up. And I kept pushing harder and harder into the wind, pushing against the wind and not letting it get me down. Then as we turned toward the finish I assumed the course was the same as the previous year and I remembered turning down the runway we started on, but as I started to turn that way, the woman behind me told me to go straight. I was still ahead of her as I turned back onto the course, but she came sprinting around me. I tried to go with her, but my legs were just done. I hit mile 3 in 6:54. I kept pushing trying to catch her and once I realized it wasn't going to happen I decelerated to the finish. In a weird way, which I realize was ridiculous, I felt like I let Jeremy down by not winning. But in all honesty I ran as fast as I possibly could have. Maybe on a different day with a less physically and emotionally exhausted body I could have run faster, but I gave the race everything I had. I was 5th overall and 2nd female with a time of 21:21 which my Garmin listed as 6:47 pace. I felt like that was a decent time considering the conditions. 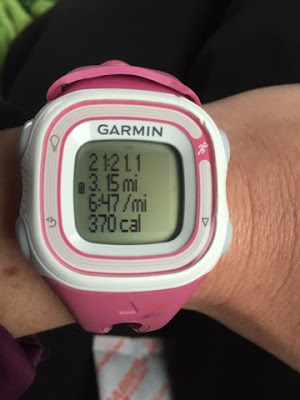 The awards ceremony was inside the museum. After walking with mom for a bit and then running back to Ty to run to the finish with him, I headed inside in an attempt to warm my feet. They hurt so much I could hardly walk because they were so cold and numb. Ty stayed outside while Carter played in the snow, making an oddly shaped snow man. I had finished 2nd overall female and 2nd in my age group. Then I felt like a dagger went through my heart as they announced Jeremy as 3rd in his age group. I was confused as to what was going on and it was a harsh reminder of his absence. It turned out we had picked up all the packets and put them under the stroller. Ty didn't think anything of it and ran the race with both Jeremy and Thomas' packets in the stroller. The bibs had chip timing so both Thomas and Jeremy were shown to have run the race. The shock turned into tears and we were able to have them remove both finishing times from the results. Later the whole incident was funny, but at the time it was devastating. It was a glaring reminder of who was missing that morning. Looking at the official results we thought it was quite funny that between Jeremy, Thomas, and Ty, the only one who had run was Ty and he was listed last out of the 3 of them. Dad finished 3rd in his age group with a time of 24:30 while Ty was 4th in his age group, finishing in 34:46. Mom walked the race in 57:01, good for 9th in her age group.
When we left the race I had mixed feelings about it. In a way I was glad we had run it but in a way I felt like it was even more disheartening than I had expected. I missed Jeremy. I missed what running races as a family were normally like. It wasn't right running along without seeing him ahead of me. But at the same time I know the longer we wait to run races, the harder it will be. Due to the race conditions the race officials were offering a comped entry fee to all runners who were signed up and decided not to run. Since Jeremy and Thomas were signed up, they can use their entry from this year for next year. We couldn't help but think how awesome it would be if Jeremy could be out there with us next year, whether it be in a wheelchair, walking, or best case scenario, running.
Posted by Liz Runningmomma at 9:06 PM