Getting Back in the Saddle

I wish there was an update to share on Jeremy's condition but at this time we are still just waiting. He is still in a medically induced coma and we are just waiting on the bruising and swelling to come down. Once it does the doctors will reduce his paralytic and start backing off on some of the meds. His last few CT scans have all looked the same which is good in that no further bleeding or damage has occurred. I feel like we will probably be in this waiting game for a few more days, even to the end of the week. So there won't be much to report.

After Jeremy's accident, if you missed it read about it here, I had mixed feelings about running. It didn't feel right to go out on a run when he was paralyzed in a hospital bed. But I also felt like it was wrong not to run since I had the ability to do so and he would want to run so badly if he were awake. So Monday I went out for my first run since the accident. Getting dressed I felt really emotional picturing Jeremy getting dressed and filling his water bottles for his fuel belt the morning he was in the accident. I imagined the excitement he felt at going out for a long run, they were his favorite. I thought of him imagining the half marathon he was training for that he will no longer be able to run.
Looking back over my years of running so much of what I have done was influenced by my older brother. I remember hearing about cross country when I was younger and thinking people must be crazy to run across the country and I would never do that. Then Jeremy hit high school and joined the cross country team. I went to meets to watch him and thought it seemed like the most awesome sport. Who doesn't love to run through grass? So when I started my freshman year of high school I joined the team and cross country ended up being my meal ticket in college. If it hadn't been for Jeremy I don't know if I ever would have given cross country a chance.

When I was in college and I would meet people who had run or were training to run marathons I wrote them off as crazy and ridiculous. I thought no one in their right mind would ever run one. When people asked if I ever would I answered with, "absolutely not!" But then Jeremy stepped in and changed my mind all over again. He trained for and completed his first marathon in the fall of 2006. Watching him run and finish the race, I was hooked. I couldn't wait to run my first marathon but I still had a year of college running ahead of me. So I trained for and ran my first half marathon in the off season. Once I graduated college I immediately began training for my first marathon which Jeremy ran with me as his 3rd.

Just recently Jeremy decided he wanted to get back into longer races and not run so many 5ks. When we ran races with the option of a 10k he wanted to do that. So I decided to bump up to longer races too and tackle some faster times in a 10k since I hadn't run one in years. He was always inspiring me as a runner and getting me to challenge myself in new ways. We were already signed up to run a Valentine's Day 10k as a team, The Sweet Sibs (my mom came up with our cute name). It makes it hard knowing he won't be running that race. It's hard knowing he won't be running any of our upcoming races. They will seem weird without him there. He never missed a race.

The orthopedic surgeon initially said Jeremy would eventually be able to walk and even run again. He estimated he might be running again in a year. That seems like such a long time and I can't help but list all the races he won't get to run with us. But we also won't know until he wakes up what the extent of his brain injuries will be. It is possible he will have to relearn to walk not just because of his leg, but due to damage to his brain. All of this is hard for me. I cry thinking of being out on the roads running while he is not. I know it will be hard for him when he wakes up and is slowly faced with this news. How will it feel to fight with his body to walk again? What will it be like for his head to be foggy and confused? How will he manage all of this while enduring extremely painful headaches as a result of his head trauma? Obviously I don't know and I never will. I hope and believe that even in the most difficult moments there will be that voice in his head telling him to fight harder. I hope there will be that intense desire to run and to push his body propelling him forward when it hurts too bad and when physical therapy gets rough. You always worry about depression when a runner loses their ability to run. Someone who runs with the desire and drive that Jeremy has run with for so many years has such a strong relationship with running. It becomes part of who you are. Long runs become therapy sessions. Easy days become days to think and solve problems. Speed work reminds you that you are alive and tough and can do what you set your mind to. I hope he is able to take those skills he's learned from running and apply them to his recovery.

Monday as I ran my 4 miles on a trail near my house, no one was with me but I was not alone. I pictured Jeremy running along beside me. I thought back over the numerous runs we shared together and the conversations we had. He almost always made me laugh. And he was faster than me. So I'd be laughing and running hard and struggling to breathe. Even when he didn't want to run I could talk him into it, saying I needed him to run with me to keep me safe. And he'd always do it. When he told me about this new trail he was running on with lots of hills, I excitedly told him I'd have to try it out. He told me he didn't think I should because it crossed some busy streets so I never did. One of those busy streets is where his accident occurred. When I finished my run I looked beside me and almost expected to see him there. I wish he was. If you are a runner and have a favorite running buddy, next time you run with them make sure they know how much you enjoy their company. I lost my favorite running buddy on Saturday, hopefully not forever but for a long time. 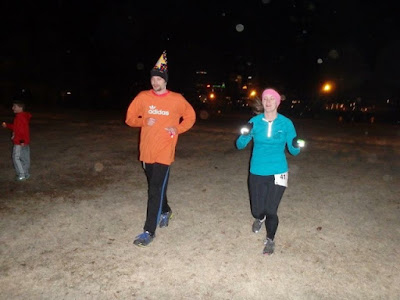