Race Into the New Year

This morning was very busy for Jeremy. They took him for a CT scan and then placed a new PICC line. His ICP during that time period got up into the 40's for the first time in days, but after that it fell back to 12 and remained in the 10-17 range for most of the day with a few spikes up to 20. His CT scan showed the hematoma on the left side of his brain has gotten a little smaller, from 14 to 10 mm. Which was good news. No changes on his CT scan other than that. He is tolerating his feeding tube so they have increased the amount of food he is getting. Although he did have a few spikes today, it still felt like a fairly stable day. I wrote a post about the Race Into the New Year the day before Jeremy's accident. It's weird going back and reading it now, knowing it was most likely his first and last race of 2016. I'm glad I had already written about the race because just thinking about it now makes me emotional. On to my race recap...

With about a half mile to go I was pushing and giving it everything I had. I kept telling myself to beat 6:36 and make the last mile my fastest. I could feel in my legs how hard I was pushing and knew I wasn't going to be able to go much faster. My third mile split was 6:27. I took off sprinting as fast as I could and as I turned the corner to the finish I saw a banner across the finish line that read "First Overall Female Finisher". It was the coolest thing. I've won races before but never ones with actual banner tapes across the finish line. I think the fanciest "tape" I've ever broken was a piece of string. I couldn't help but smile and feel even more pleased with the huge postpartum PR I was able to accomplish. I was 1st female out of 236 and 7th out of 405 total finishers. My official finishing time was 20:29! That put me at an average of 6:32 per mile for the 3.14 mile course. Between the fireworks, my light up shoelaces, and getting to run through the tape at the finish I was pumped up like no other. I watched dad finish and then ran back toward mom blowing my noisemaker and cheering for runners as I went. I made it to the bridge and realized it was too congested for me to cross without being in the way so I stood cheering for everyone until I started shivering so much my jaw hurt. Then I headed back to change into dry clothes before going back out to walk to the finish with mom. It was so much fun getting to share with her and my dad about how I got to run through the tape at the finish. It really was just the coolest thing. 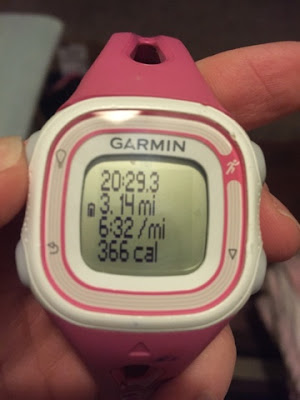 We made it back just in time for awards. As the top female finisher I received a giant champagne glass filled with blue confetti, a Happy New Year's tiara, a medal, and a gift certificate for $75.  Jeremy and dad also received medals, each finishing 2nd in their age groups. Ty stayed home with our sleeping babies. Well, one sleeping baby and the other "screaming in his face" since Elise woke up right as we were leaving and didn't go back to sleep until 12:30. Thomas went to a party with friends so he opted out of the race. I felt bad for Ty when I found out how his night went, but it worked out pretty well for me that Elise was running on a lack of sleep as she slept through the night and then slept in until 9:30 the following morning. That really helped me out since I didn't get to bed until 2 am and I'm just not built to stay up that late anymore! Running from one year to the next is my favorite way to kick off a new year and I'm excited for what 2016 has to bring!

Posted by Liz Runningmomma at 7:34 PM