Once Carter was old enough to appreciate baths he was always kicking and splashing and having a great time.  At the beginning of the summer I got him a baby pool for the backyard and he played in it for 45 minutes, just going to town.  He probably would have played longer, but I was afraid he’d get too tired.  Read about that here.
Last night we went to a friend’s house for Carter’s first experience with a real pool.  The great thing about their pool is that it’s a salt water pool, so I didn’t have to worry about chlorine and chemicals getting on his skin.  But I was worried he might be too tired to enjoy it because he pulled his power nap schedule where his longest nap of the day was 30 minutes. 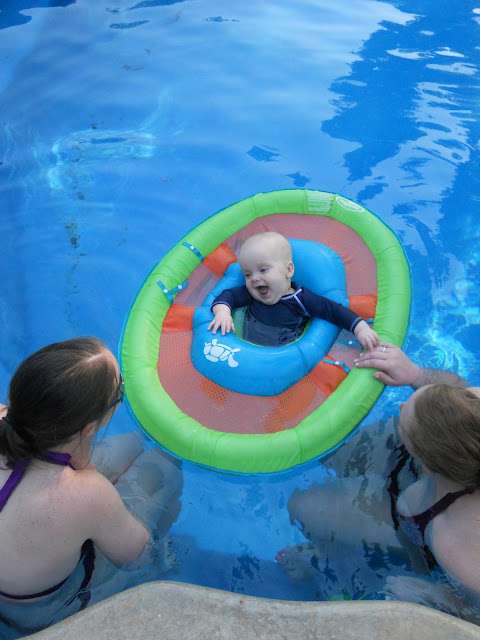 At first I got in with him and held him.  He initially seemed a bit confused and unsure of the water temperature.  Once he got used to the temperature, the kicking began.  We got out a baby floaty for him and he was gone.  He kicked his legs the entire time, actually moving himself through the water.  While he was in the floaty I would push him away from me and then pull him back and say, “Boo!”  He thought it was hilarious.  He also liked it when we would get under water by the floaty and then pop up by him and say “Boo!”  He is quite the character!

He played in the pool for almost an hour before I decided he needed to get out.  I knew much longer and he was going to be wiped!  Right before getting out Ty put him on his tummy with his face out of the water and it looked like Carter was really swimming.  I think we have a water baby on our hands and everyone else agreed!
Last night was the most fun I’ve had in a pool since I was a kid.  I know I’ve said it so many times before, but watching Carter do something for the first time is the best feeling ever!  It is so much fun to watch his face turn from confused and curious to excited.  I just couldn’t stop laughing while watching his little legs kick in the water.  I love my little man and can’t help but picture him one day swimming all on his own.  I know when the time comes I’ll be ready, sunscreen in hand!

Posted by Liz Runningmomma at 6:19 PM