Friday morning during my run I was thinking about when we should go to the zoo.  I realized the only other day we'd be able to go was Saturday and it would probably be pretty packed.  When I returned I checked with everyone to see if they'd like to go and the answer was a resounding "yes"!  We fed Carter, packed our bags, and were off to the zoo.
We had quite the group with us: my mom and dad, my grandma and grandpa, Ty, me, and Carter.  It was pretty warm, but the wind was cool and refreshing.  We started off at the sea lions which Carter enjoyed and didn't make it to very many animals before he fell asleep.
I really wanted Carter to see the elephants because they are my favorite and there are two baby elephants. Kenzi is a 2 years old who I got to see a few months after she was born.  The newest is a two-month old named Priya. Carter woke up just in time to see them, but they were far enough away that he wasn't too impressed.  Although he did watch and track them as they walked.
Not far from the elephant exhibit we came across the hippos.  I was surprised to see them swimming right up next to the glass.  I sat down in front of the tank with Carter and waited for them to swim by.  He was intrigued and stared up at them as they swam in front of the glass.  They were definitely his favorite animal he saw on this trip to the zoo.
When we returned to my grandparents' house from the zoo we freshened up, backed bags for overnight, and left for Ty's cousin Megan's house.  At her house Carter would meet Megan, Scott (Megan's husband), Brody (Megan's brother), and Stan (Megan's dad) for the first time.  Ty's Aunt Netta would also be there and had already met Carter.
We came upon a wreck on the highway which delayed our arrival, so it was time to start Carter's bedtime routine when we got there.  Netta and Megan helped give Carter a bath.  Once he was in his jammies and fed, he laid and rested with everyone for a little bit.  Before I took Carter to bed I had him go around and say goodnight to everyone.  As he was giving Brody kisses, he spit up on Brody's cheek.  So much for first impressions!
Carter had a bit of trouble falling asleep due to neighbors shooting off fireworks.  Once he was asleep we ate dinner and stayed up talking for quite a while.  Carter woke up at midnight and then slept all the way until 5:00 am!  He went back to sleep until 8:00 am and was ready to ham it up for everyone again.
Everyone enjoyed watching Carter eat.  I made him some rice cereal and had some milk leftover so Netta fed him a bottle.  He was playing with the spoon we had used with the rice cereal and kept hitting the bottle with the spoon.
Netta brought an old loaf of bread so we could take Carter down to feed the ducks.  The pond was about a mile and a half away so we decided to walk.  We got there and were disappointed to see there were no ducks.  Carter didn't mind and just enjoyed sitting in the shade, looking around at the trees.
Megan decided to get Carter out of the stroller and held him down so he could feel the grass on his feet.  He seemed to think it was interesting and would curl and then flex out his toes. 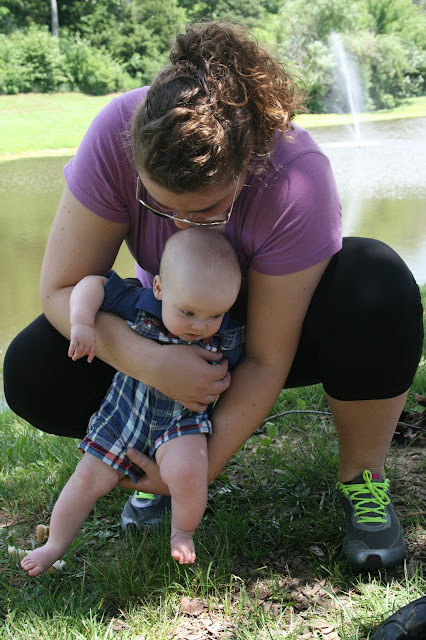 The trek back to their house was mostly uphill.  Carter fell asleep in the stroller as we all huffed and puffed our way back up to their house.  When we got back Brody stopped back by to see us before we left and Carter spit up on him again.  Carter only spit up twice during our time at Megan's house and both times were on Brody, poor kid!

During a diaper change Carter started pushing his feet against the hardwood floor and realized he could scoot himself around.  Our entertainment then became watching him scoot around on the floor.  We turned that into sitting on the floor and talking to him to get him to scoot toward us.  He is definitely interested in becoming mobile!

Posted by Liz Runningmomma at 10:20 PM