Carter had a bit of a rough night last night.  I assume it was because he had been woken up multiple times after having fallen asleep, poor little guy.  We got back to my granparents' house a little after 10:00.  He went to sleep right after we got back, but was up at 12:30, 2:30, 4:00, and 6:00.  I was one tired momma this morning!  His schedule was normal tonight so here's to hoping for a good night's sleep tonight!

After such a sporadic sleep schedule last night I went back to bed with Carter during his morning nap and slept from 7:30-9:00.  When we got up we chatted and ate breakfast.  My grandparents walk 3-4 miles every morning and were ready to go.  Ty walked with them and I ran 4 miles and then met up with them to walk the rest of the way back with them.  It felt good to run without the stroller.  I felt fast!
My grandparents had gotten Carter a new toy ball.  From the first look at it, I knew he would love it.  Anytime he is by a laundry basket he loves to poke his fingers through the holes and play with it.  The ball had holes just like our laundry basket.  He instantly stuck his fingers into the ball, grabbed it, and started swinging it around. 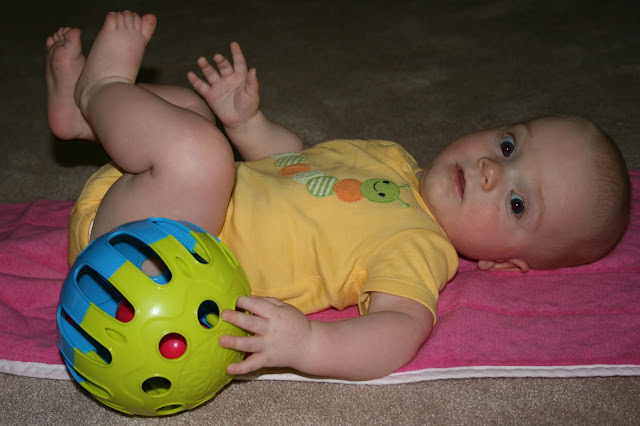 We played, rolling the ball across the floor with Carter sitting propped up with one of us.  He loved it!  Sometimes he would push or grab the ball, other times he would happen to kick his legs at the perfect time to send the ball back toward the person opposite him.  I think it is his new favorite toy! 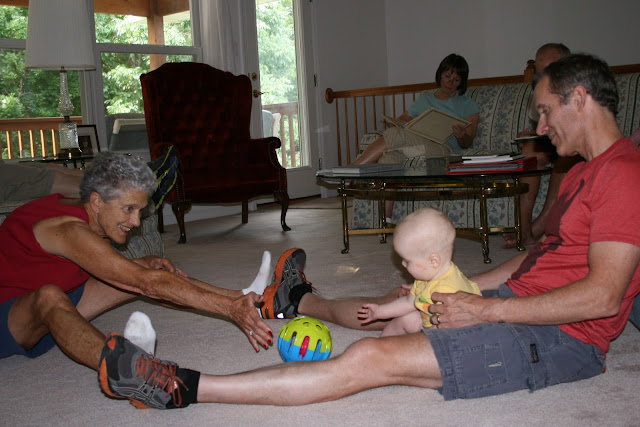 Carter enjoyed playing on the floor with everyone and reading a book with his great-grandma.  He even got to show off his medal and stuffed animal from the summer reading program.  We had a very relaxing and enjoyable day. 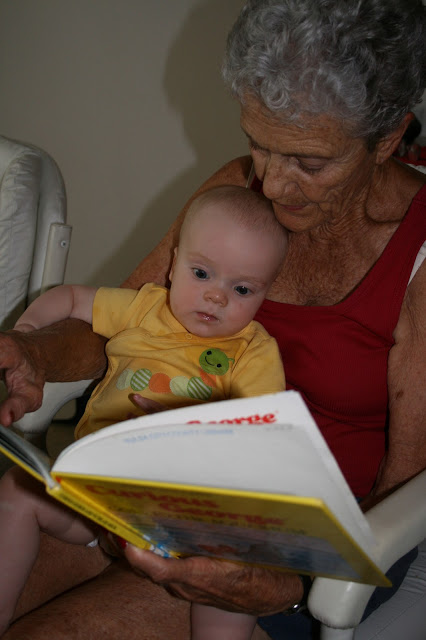 My friend, Steph, got off work at 6:00 and we headed over to see her.  I didn't want Carter's schedule to be thrown off again so my parents came with us and then took Carter home after Steph and her fiance, Richard, got to meet him.  After that we headed out to dinner with Steph and Richard.  It was so much fun to see them.  I couldn't believe it's been 2 years since I've seen them in person.  We talk on the phone enough that I feel like I've seen her much more than that!

While we were at dinner my parents and grandparents got Carter ready for bed following his normal routine.  He got a bath and my grandma gave him a bottle.  It was only the 2nd time I've ever missed nursing him that last time before bed.  I have acknowledged that I have a bit of separation anxiety and I'm working on it, one little step at a time.  It's especially hard being a working mom because when I do get to be with him, I don't want to miss a thing.

Steph and Richard are getting married in San Diego in October.  Ty won't be able to go so I'd be going alone and with the timing of the wedding and Carter's bedtime schedule it would be best for Carter to stay home with Ty.  I really want to go to the wedding and know that if I'm going to be able to do it, I need to be okay with not just missing Carter's nighttime routine but everything in between.  It will be hard.  Part of me doesn't want to do it.  But then I think of Steph saying those vows and I don't want to miss that.  I know it makes no difference to Carter and he doesn't have the separation anxiety issue, it's all me.  Who knew being a momma would be so hard?

Posted by Liz Runningmomma at 9:26 PM