The Cat Who Cried Wolf 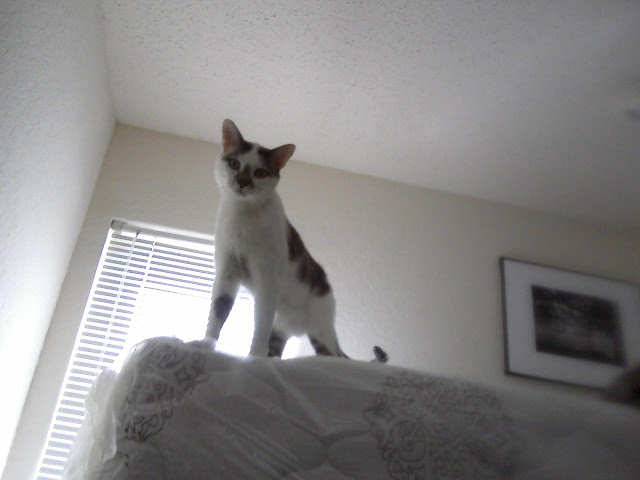 Our cat Skippy came into our lives in an unusual way.  I was visiting Ty for the weekend and we decided to go garage saling Saturday morning.  As we approached one of the garage sales I heard meowing.  Ty then pointed out a cage right up by the curb.  Inside was a very scared grey and white cat.

For months Ty had been talking about getting a cat.  So much so that I bought him cat toys for his birthday.  He had a cat growing up and loved the scary little beast to pieces.  If you hear stories of his cat, you might wonder how anyone could be attached to such a creature.  She started out as a barn cat and was transitioned into their home.  Many qualities of the wild cat remained within her.

Back to the cat on the curb.  Of course I couldn't help but walk up to see the cat.  A man was standing at the cage, put his hand in, and the cat shied away.  I looked in at the cat and was immediately reminded of my childhood cat, Garfield.  He looked just like him except he was grey where Garfield was orange.  I reached in and the cat rubbed his face against my hand.  We looked around at the nick nacks for sale and left.

As we continued on to other garage sales I couldn't get the cat off my mind.  I kept telling Ty he should get the cat but he didn't want to pay the deposit to his apartment complex.  Finally I called my mom and asked her if she thought I was crazy to want the cat.  She said no and that I should go back if I really wanted him.  After hanging up with her I immediately asked Ty to turn around.  I was so worried someone else had taken the cat while I was pondering what to do.

We returned to the garage sale and low and behold there he was still very scared and meowing at the curb.  We talked with his owners, took all the items they gave us along with him, and headed out with the cat we later named Skippyjon Jones.  What can I say, I'm obsessed with children's literature!

Skippy lived with me for a couple months before I moved to the same town as Ty and then he moved into Ty's apartment.  He very quickly became extremely attached to Ty.  I may have been the one to initially adopt Skippy, but there is no denying that he is Ty's cat.  He lays on Ty when we are sitting around, he sleeps with Ty, he generally just loves Ty to pieces.

Last April all the sudden the tides had turned.  Skippy no longer laid on Ty when we were sitting on the couch.  He no longer slept with Ty on his side of the bed.  All of the sudden Skippy was all about me.  We couldn't explain it.  It was the strangest thing.  Then the positive pregnancy test came along and we wondered, could it be?  Did Skippy know about Carter weeks before we ever did?

The entire pregnancy Skippy was always laying on me and sleeping on me.  I was having a hard enough time sleeping at night, add in a warm little kitty cat and things were getting rough.  Toward the end of our pregnancy I woke up one night to see Skippy perched on the highest spot in the bed, my belly, staring down at me.  The cat was relentless. He didn't care that Carter would kick him every chance he got.  It was hilarious to watch Skippy bounce while sitting on my belly as Carter waged a war to remove him.

The moment Carter was born and I was back to my normal self Skippy went straight back to Ty like he had never left him.  Skippy was again at Ty's side while sitting on the couch and sleeping in bed.  All was back to normal and I was quite relieved.

Then last weekend we were sitting on the couch and the strangest thing happened.  Skippy jumped up on the couch, walked around Ty, headed straight to me, nuzzled up and laid down for the first time since Carter was born.  Ty and I immediately looked at each other with frightened looks on our faces.

Neither of us said anything for a minute and then I finally spoke the words neither of us wanted to say out loud, "This is the first time Skippy's laid on me since Carter was born."  Ty gave me a knowing look and we let it drop.  When we went to bed that night I nervously waited to see where Skippy would settle down.  He came to my side of the bed and we both joked that was it.  We must be pregnant!

We joked about it the whole next day, but then I began to worry.  I know the likelihood of a breastfeeding mom getting  pregnant is pretty slim.  Add in my birth control and it should be pretty much impossible, right?  But who can argue with a cat, especially a cat who knew before the pregnancy test last time.  We decided to check just in case and were greeted by the words "not pregnant".  Thank goodness our cat isn't a foolproof way to test for pregnancy and at least this time he was just crying wolf!  Carter is too young to be expecting a sibling!  I will happily wait another year or more before Skippy cuddles up with me again!

Posted by Liz Runningmomma at 8:43 PM

Email ThisBlogThis!Share to TwitterShare to FacebookShare to Pinterest
Labels: pets