We have taken Carter on a few longer car rides.  The longest trip has been a 4 hour drive.  Luckily he has been really good!  We have a 6 hour trip coming up toward the end of June.  We’ll see how that goes.  The first time Carter went on a trip I was alone and feared he would get hungry during the drive and I’d have to pull over to feed him.  He slept the entire time.
A month later Ty and I were scheduled for a visit to his family that entailed a 4 hour drive.  I was worried until Ty came up with a great idea.  We got an adapter for the cigarette lighter in his car so I could plug my breast pump in.  If Carter got hungry I could plug in, pump, and then feed him a bottle.  It worked like a charm.  I would sit in the back with Carter so I could feed him if he got hungry.  That also enabled me to play with him.

We pack a laundry basket with the breast pump, books, toys, a Ziploc bag full of clean pump parts, and a Ziploc bag to put the parts in once they become dirty.  I sit on one side of the car seat and we put the laundry basket on the other side.  Now that he’s eating solid foods we also pack a bib, spoon, and baby food.  We recently discovered we make less of a mess without a bib.  When using a bib Carter grabs the bib and rubs it all over his face getting food in his eyes, ears, and hair.  We don’t pack a bib anymore.
Our trips usually begin with Carter awake.  I’ll start out by reading him a book.  I love using board books because he can reach out and turn the page. 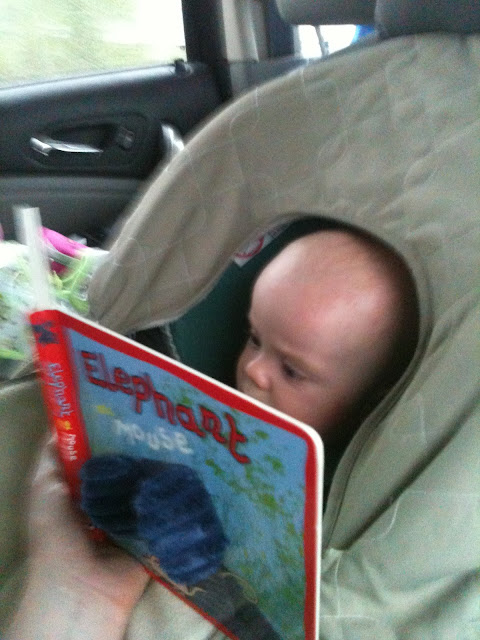 Then I’ll give him some toys to play with or play with him using the toys.  We also play peek-a-boo.  His favorite version is when I cover his face with a blanket or burp cloth and then lift it while saying boo.  He cracks up every time.
He then gets hungry.  I usually start by giving him some baby food.  When he’s eaten the baby food he’s ready for some milk to wash it down so I pump and give him a bottle.  Lately he’s gotten to be Mr. Independent and grabs onto the bottle, trying to hold it himself. 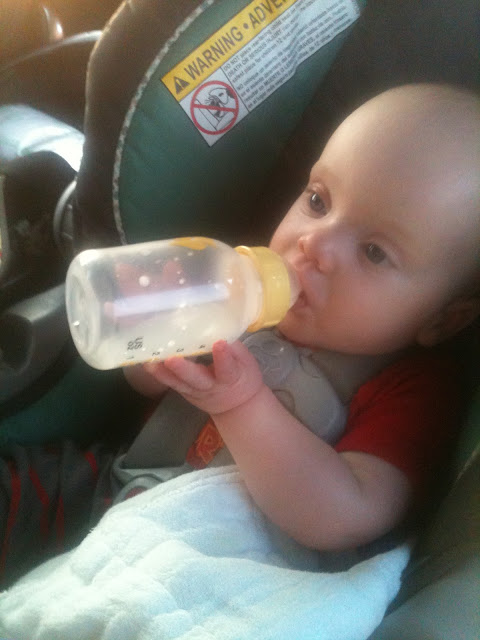 Once he’s gotten his fill he falls into a deep sleep.  I always feel bad for him as his head slips to the side and I watch the strain on his neck.  When I fall asleep like that I wake up in a world of pain, but he never seems to mind.