A Boy and His Dog Revisited

In April I wrote about Carter and Harper's relationship here.  It has changed so much since then and I have loved watching their relationship grow and change as Carter gets older.

Carter loves Harper.  He thinks she is hilarious.  When she walks by he laughs.  When she jumps for food he laughs.  When she lays next to him and her tail brushes his face he laughs.  Anytime she's around he watches her and smiles.  I caught him on video laughing while she jumped for a treat.
If the video doesn't work, you can watch it on youtube here.

The feelings are mutual.  Harper follows us from room to room.  If Carter is lying on the bed, she's on the bed.  If Carter is lying on his activity gym, she's lying right next to it.  If he's in his crib, she's lying right outside his bedroom door.
When they are lying next to each other, Carter reaches out and "pets" Harper.  He has even grabbed a hold of her ear and pulled it.  Normally she is unsure of babies and small children.  If they try to touch her, she gets out of range very quickly.  I'm so glad he feels differently about Carter.
Today I decided to take Harper on a run with us again.  She sat in the back of the car with Carter on the way to the trails.  When we arrived she got really excited and whined as she wagged her tail.  Each time she wagged her tail it slapped across Carter's tummy and legs.  He laughed the entire time. 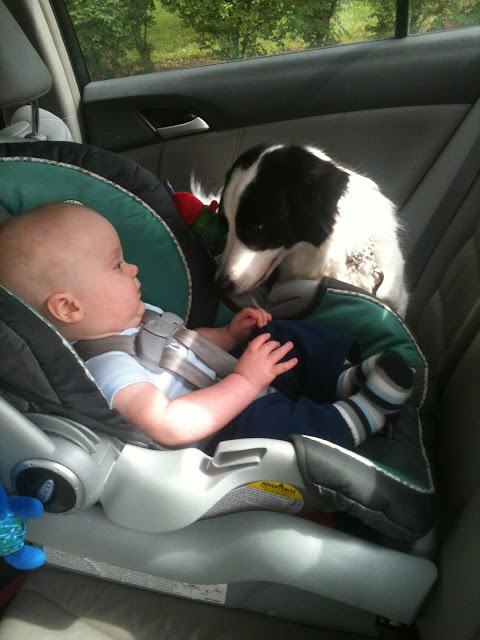 Later in the day Carter was on the bed and we were practicing sitting up.  He slid sideways and landed right next to Harper.  He reached out and rubbed his hand against her and then grabbed a handful of fur.  Harper jerked her head to the side and mean mugged him, but that was it.  I was so proud of her.  He kept "petting" her, so I took a video.
If the video doesn't work you can watch it on youtube here.
Posted by Liz Runningmomma at 7:58 PM