A Boy and His Dog

When I was pregnant I worried about how Harper would do with Carter.  I figured she would do okay, but she is so timid and nervous, I just wasn’t sure.  Before we came home from the hospital my parents took one of Carter’s blankets home for her to smell.  She was so excited to see them that she didn’t really pay much attention to the blanket.

When we brought Carter home we left him in his car seat.  We let Harper in the house to sniff him.  She initially came running straight to me, she had missed her mommy!  But then her attention turned to Carter.  We had to cover his face because she wanted to lick him, but other than that, she was so sweet to him! 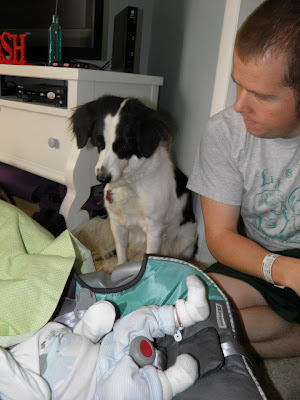 Now Harper is completely smitten with Carter.  Anytime he is on the floor, she is right next to him.  When we’re in his room and she’s shut out, she is right on the other side of the gate watching him.  If he cries, she runs to see what’s wrong.  Sometimes she tries to lick him, sometimes she just offers support. 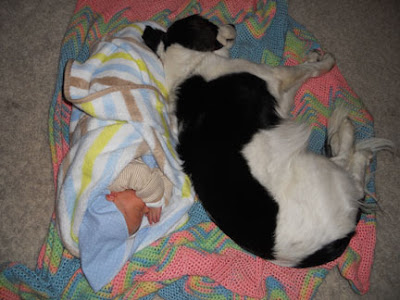 One day I had Carter lying on the bed and he started fussing, so Harper jumped on the bed next to him.  He was swinging his arms around and grabbed a handful of her tail fur.  She didn’t mind at all.  She even wagged her tail as he was holding it.

I’m so proud of my timid, little mess of a dog!  But I won’t lie, she’s far from perfect!  We are working really hard on the licking.  She wants to plant her doggy kisses all over his little body!  She also gets a bit jealous.  She’s used to being my baby and now she has a baby to share her mommy with.  When I talk to Carter she tries to get in my lap or get right in front of Carter.  She also gets jealous when my mom is around.  She wants to jump all over her grammy to get attention on herself rather than Carter.  I’m sure she’ll get used to sharing the attention in time.
Carter seems to love her back.  He loves to stare at her, mostly because she is black and white.  He even tracks her when she’s in the room.  I’ve even caught him smiling at her a time or two.  I look forward to the day when he is old enough to love on her and play with her.  For now the interaction is minimal, but I sure love seeing my boy with his dog! 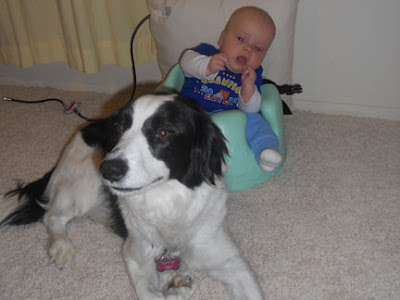 Posted by Liz Runningmomma at 4:35 PM