We were still at my parents' house for the weekend but the new excitement was that Ty was back from his work trip and was with us! Carter was so excited to have daddy back and wanted no one else Saturday morning. My mom had a coffee date with a couple of friends and asked me to stop by with the kids so her friends could meet Elise. Ty was wiped from his trip and from getting up early with Carter so he laid down for a nap when we left. I had explained to Carter that we were going to see Oma's friends and even told him their names. We kept talking about how they were Oma's friends, but he was still confused when we arrived. He said, "Where friends?" and looked around expectantly for other kids to play with. I should have explained that Oma's friends were her age! Luckily the ladies weren't bothered by his lack of interest in them, even finding it funny.

The big excitement for the afternoon was meeting Hayden at the pool. Carter could hardly wait! There is a kiddie pool in my parents' town that is shallow all the way across with a beach entrance and the height only getting up to maybe 2 feet. I used to take the boys I babysat quite a bit when they were little so I was familiar with the pool. We arrived right as it opened and got right to work setting up an area for Elise. Just in case there wasn't much shade I brought an umbrella which we were able to set up in a lounge chair to create quite a bit of shade. I dipped Elise's feet in the water and she thought it was way too cold so I sat at the edge of the pool under the umbrella holding her while watching Carter until she fell asleep. Then I laid out a beach towel in the shade and laid her down. When Erin arrived with Hayden and Addison, Carter ran out of the pool yelling in excitement at the sight of Hayden. We made room for Addison in the shade with Elise and they both laid in their swimsuits. I was worried the sun would shift and the girls would no longer be in the shade so I constantly came back to check even though my mom was sitting with the girls. Carter had a blast and we stayed for about 1.5-2 hours before he started getting tired and was ready to go home for a nap. 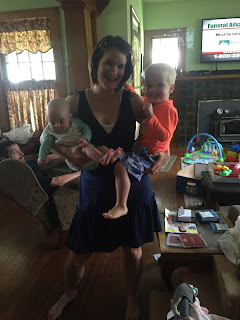 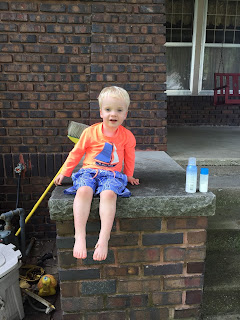 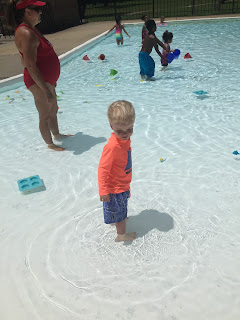 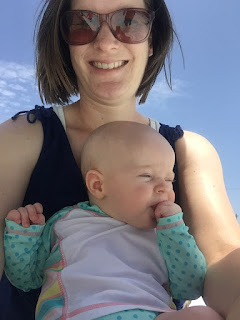 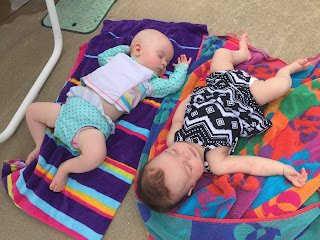 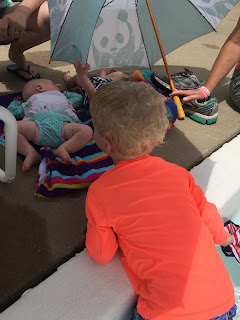 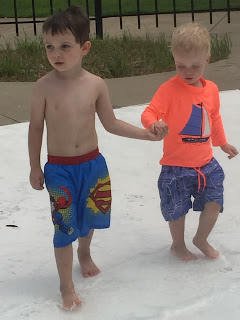 That evening after Elise's nap I looked down and noticed the side of her head was a bit red. It took me a minute to realize she had gotten a sun burn. I replayed everything in my mind even looking back through pictures but everything confirmed she had been in the shade during our entire trip. The only thing we could think of was that my dad held her for a bit without the umbrella while I got everything set up and she must've gotten burned then. It couldn't have been more than 5 minutes if that. I felt terrible, still feel terrible. I cried off and on for an hour Saturday evening. I felt like I had failed Elise. Here she was at under 4 months old with a sunburn when Carter has never had one. How could I do that to my precious baby? I'm still carrying guilt and probably will for quite a while. Every time I look at her head I tear up. I hate that I was so prepared and so cautious and my sweet girl still got burned. After the emotion of realizing Elise had a sunburn and crying every time I looked at her head coupled with some bad news, my heart just wasn't in the 5k race we ran that evening. I more so wanted to curl up in a ball in bed than run a race, but I got out and did it and had some fun too. More on the race to come later. 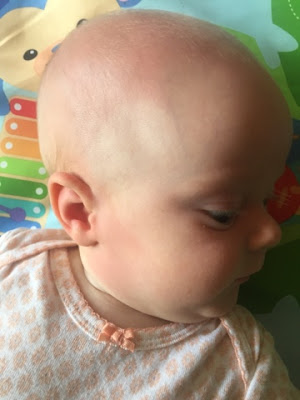 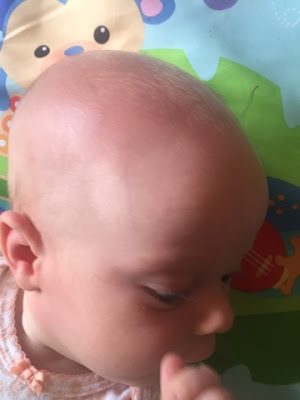 Sunday was a glorious day. My mom had picked up an inflatable pool complete with a slide, a fountain, balls, and an open alligator mouth to shoot the balls into. She had my dad pick up more water balloons and had the water guns out again. Carter had a blast watching the pool get pumped up in the backyard. Erin came over with Hayden and Addison a little after noon and the real fun began. Elise splashed around in the pool until she was exhausted and passed out on my chest. Ty smoked some chicken, macaroni and cheese, and cream cheese while we all played. Carter and Hayden did a little wrestling in the pool and had a blast together. I love how well they get along and play together. Partway through our play time my dad lounged out in the pool and stayed there for quite a while. We were having so much fun that I hated to leave and kept postponing our departure. We ended up leaving around 3:00 and both Carter and Elise conked out within minutes and slept the entire way home. It's so nice to know Carter can push through to a later nap time when needed, he just needs a nap! It may throw his schedule off a little bit but it's worth it on occasion. We were so thankful for so much time with family and friends, enjoying the outdoors. We were also so thankful to have Ty back and are still giddy with excitement at the sight of him! 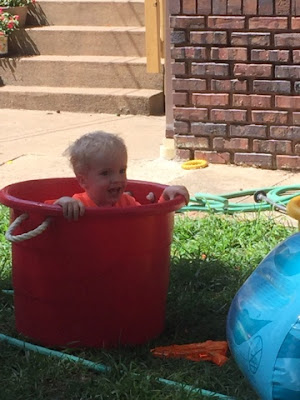 Posted by Liz Runningmomma at 1:24 PM