Basically every July 4th since I was in college my family has run the Firecracker 5k in my hometown. When I was younger we would go to my grandparents' house for the holiday and would run a 5k when they had it but they didn't run one every year. Then the highlight for me was the rodeo in the evening. Just a little side note as I travel down memory lane. So the Firecracker 5k is run on a golf course. It's a 1.5 mile loop you run twice and then turn on the second loop and go toward the finish actually finishing a little bit long at 3.16 or so. Most of the race is in grass but a portion of it is on the paved cart path. The grass slows times down every year but how much depends on the weather leading up to the race. This year it rained all night and some the morning of so the grass was soggy and wet which led to even slower than usual times. I wanted to run faster than my last 5k which was 23:33 at the Starry Night 5k. I knew I may not be quite as fast as I'd like due to the terrain, but I was okay with that. My main goal was to be more consistent with my mile splits. With my last race I had run around 7:30 for my first and last mile but that middle mile I faded to just under 8 minutes. I hoped to keep that second mile closer to my other 2.

Ty was an awesome help in the morning and got both the kids ready by himself because he was ready before I was. Since he did such a great job I was ready in time to run to the race as a warm up. The golf course is a little over a mile and a half away from my parents' house so it was the perfect way to get my legs ready for the race. As I arrived at the race I saw my friend, Kristie, and her family who I hadn't realized would be in town. Carter was ecstatic to see his buddy Nolan who tried to talk us into coming to his house to play after the race! I took off at the race start feeling strong and saw Ty and dad ahead of me. I caught up to Ty and then slowly caught up to dad by the half-mile mark but couldn't quite catch him enough to get up next to him so I ran along behind him for probably about a mile before I finally got up beside him going into the second loop. I ran my first mile in 7:30 which is about what I've been doing so nothing new there. Once we started the second mile I made a concerted effort to maintain my pace. It helped that I was still passing runners because this is a larger race. With the Starry Night which is a smaller race it thins out after the first mile and I typically don't really have anyone to run with. I was feeling great and was confident I was maintaining pace although the effort was definitely more. I didn't look down at my watch to check pace much at all during the race because it was pretty pointless. I'd be running 7:05-7:15 pace on the pavement and then we'd hit the grass and I'd be at 7:40 pace or even slower. Transitioning from pavement to grass is also hard on your legs. I was pleased when I went through the second mile also in 7:30.
Going into the last mile I had pulled ahead of dad and passed everyone who had been close to me. So for the last mile the closest person to me had a 15-20 second lead. My goal was to make my last mile my fastest which I did with a 7:27! I also wanted to hold off anyone coming from behind and keep from getting passed which I was also able to do, finishing in 23:21. I jogged a mile and a half cool down for a 6 mile total on the day. I was pleased with my pacing. Consistency is key when you are coming back from an injury or are out of shape. It's less strain on your body. I knew if I could just get that middle mile down I could shave 20 seconds off my time which was exactly what I did. Now I just need to shave a few more seconds off my overall pace at each race and eventually I'll be back down where I'd like to be!
We stayed for awards and did well. All times are based off our Garmins as they still haven't posted official race results online and we're thinking they may not. Jeremy was around 19 minutes. The clock at the finish line showed under 19 but his Garmin said 19:24 so we're thinking he may have forgotten to stop it after he crossed the finish. We know he was in the top 10 finishers, but are not sure how far up exactly and he won his age group. I finished in 23:21 and placed 3rd in my age group. Dad was right behind me in 23:28, finishing 2nd in his age group. Ty didn't wear his Garmin but we know he was 24:50 something. Mom walked the first lap with the double stroller and then didn't cross the finish line so they wouldn't count her finishing time. It was fun to see her pulled to the side cheering for us. Back to our usual we left the race with 3 medals! It was a fun race and we plan to do it again next year. 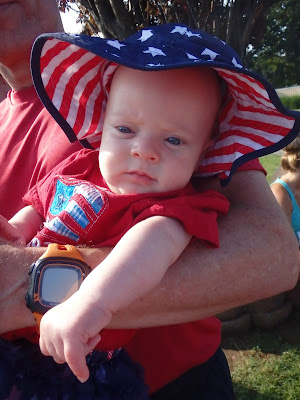 Posted by Liz Runningmomma at 5:04 PM