I really should change these to Stuff Carter Says. Although a lot of it is funny some of it is just something he said that was so cute I want to always remember it. His sense of humor is really developing and a lot of times he says stuff just to make us laugh. 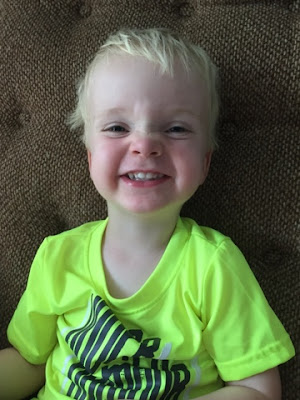 "Oma, Opa visiting? That will be fun!"

Me: Do you wanna go see Hayden today?
Carter: Oh yes, that be fun! Go on Tuesday?
Me: Yes, today is Tuesday.

Me: Do you want to go to storytime?
Carter: Oh yes! I love storytime!

Elise was crying in the car so Carter started singing to her and she stopped crying.
Elise: crying again
Carter: No more singing, sissy!
Elise: continues to cry
Carter: Ok, sissy! Then he starts singing Twinkle, Twinkle Little Star.

Carter: Sissy, stop sleeping! It's light outside, not dark bedtime!
Me: Sissy sleeps a lot right now, doesn't she? When she gets older she'll only take a morning nap and an afternoon nap. Then when she gets even older she'll just take an afternoon nap like you.
Carter: Sissy not big. Sissy baby. Sissy takes one nap like Carter when she big?
Me: That's right and she'll be awake a lot more.
Carter: Then sissy can play with Carter. She play cars with me and sing with me. That be fun! 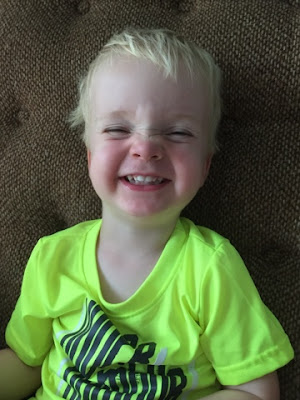 We had checked out a lullaby book from the library. I couldn't remember the words exactly so I made them up a little as I sang to Elise. Later in the day I sang it by reading from the book.

Carter: No, that not right! That not true!
I guess he liked my made up words better!

"Mommy, you my friend. I love play with you. It fun." Melt my heart!

While driving in the car on our way to the park.
Carter: You grumpy today, mommy.
Me: I'm grumpy?! I start wracking my brain trying to think of what I did that morning that may have been grumpy.
Carter: No, you not. I just kidding! Then he starts laughing!

Me: Carter, would you like more grapes or canteloupe?
Carter: No, thank you though.
I thought it was so cute because he normally just says no, thank you.

I was carrying Carter in to lay him down for a nap.
Me: Carter you are so much fun. I had a blast with you this morning!
Carter: 1, 2, 3 BLAST OFF!

Carter was crawling around in my parents' backyard pretending to be a dog.
Carter: Doggy want bucket.
Me: Okay, but don't put it in your mouth, it's dirty. He had just watched Fezzik carry it around in his mouth.
Carter: Put it in my hands... Put it in my paws.

Carter: Sissy still little.
Me: That's right, but it won't be long until she's big like you.
Carter: And then she can eat apples, mimis (that's what he still calls bananas), and candy bars!

"That's not my favorite." He says this all the time! Usually about a book he doesn't want to read!

We were on a walk with Harper when a couple dogs started barking at us.
"Mommy, those dogs driving you crazy?"

"That's amazing!" is a big one right now and he'll use it as a question too. He'll point something out and say, "Mommy, that amazing?"

While I was making dinner one night Carter got a new outfit and started changing all by himself, even putting shoes on.
Carter: I getting dressed up.
Me: I see that, what for?
Carter: For daddy when he come over! 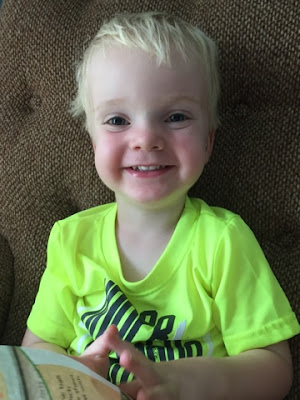 I want to record some cute ways he pronounces words that I haven't documented yet.

Then there's the mixing up of pronouns that cracks me up:
"What her doing?"
"You want to come with we?"

He was coloring and all the sudden brought me a towel asking me to put water on it. Then he went over to his picture and started wiping on a spot where he colored outside the lines and sadly exclaimed, "Oh, not working!"

He was reading a book and would stop to point at shapes, asking me what shape they were. When I responded he told me, "Good job, mommy!" 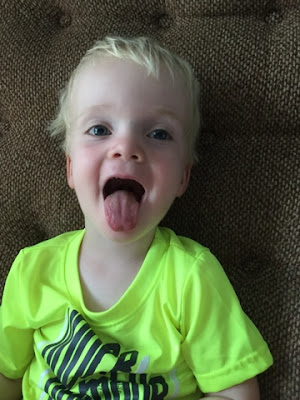 Posted by Liz Runningmomma at 11:52 AM