My dad grew up in St. Louis along with his 3 brothers. My grandma wanted a girl so badly that with the 4th boy she told the doctor to put him back and pull him out a girl. Ever since I was a little girl and heard stories of how my grandma always wanted a girl and never had one and so doted on me as the first granddaughter I was convinced I would be just like my grandma and end up with all boys. In my mind that wasn't so bad as I would prefer all boys to all girls! When Elise came along I was so amazed that I actually had a girl. I still change her diaper and look down surprised and excited to see she is a girl! I guess I don't take after my grandma in that respect although all her boys were born around 3 weeks early so I may take after her there! My grandma was really hoping I'd have a girl so I just couldn't wait to bring Elise to meet her! We made plans to travel to visit everyone and were very limited on weekends we could go as Thomas was traveling a lot over the summer and Ty couldn't take off days anyone else at work had taken off. We chose a weekend everyone could go only to find out 2 of my 3 uncles were leaving for vacation that weekend. We decided to come up earlier in the week and then stay through the weekend so we could see everyone before they left. When Ty turned in to get his days off it turned out someone had already asked off for the weekdays he needed. I wanted to try to reschedule so he could go with us but he convinced me that after all that planning and with really no other viable weekends in the summer, since my dad and Thomas both work in education summer was the way to go, we should just go forward with our plans. So I reluctantly agreed. Then he got the news he had to travel for work the week after July 4th. That meant he'd be gone for a week, we'd have one week together, and then Carter, Elise, and I would be gone for a week. I was bummed, but what can you do?! I told myself it wasn't that big of a deal as many families deal with the husband traveling much more and military wives have to deal with their husbands being away for months at a time. So I sucked it up and even though I missed him like crazy, we got to FaceTime almost every night which was nice.

We left from my parents' house Wednesday morning which meant we drove to their house Tuesday and spent the night. We stopped on our way to visit my mom's Aunt Sue so she could meet Elise. It was the perfect stop because she had a bunch of toys for her grandkids so Carter got to play and stretch out his legs before getting back in the car and taking a nap. When we made it to St. Louis we headed straight to my Uncle Dennis and Aunt Trish's house to see them and their kids because they were scheduled to fly out the following morning for a cruise. Carter enjoyed playing with my 12 year old cousin, Ainsley, and enjoyed snuggles with my cousin, Sydney, who heads off to college in a couple weeks. It makes me feel old because I remember playing with her when she was Carter's age! We enjoyed some amazing pizza for dinner. One was a taco pizza complete with nacho cheese sauce and crunched up Nacho Cheese Doritos on top and another was a Chicago style cheese pizza that tasted like a mozzarella stick turned into a pizza. I kept thinking how much Ty would have loved the pizza which made me miss him so much. It was hard to leave because we were having so much fun but it was past Carter and Elise's bedtime so we had to. After driving to my grandparents' house where the kids and I were to spend the night and giving them baths, Carter didn't get to bed until 10! He was a champ though!
Thursday we got up at 7:30 and once we'd had breakfast and got around I took Carter and Elise out for a run to a nearby park while my grandparents went on their usual walk and met us at the park. Carter had a blast at the park which was right by a butterfly house. He really wanted to go in but we told him not this trip as he is extremely rough with animals/unexpectedly kills them sometimes. We started our walk home at lunchtime. Carter didn't want to leave the playground so he insisted, "I not hungry. No want eat lunch" the entire way back but then proceeded to kill off a hefty portion of food upon our arrival. That evening my grandma had my Uncle Dan, Aunt Monica, Uncle Doug and his fiancé Pam, and my cousins Kiley and Spencer over for dinner so they could all meet Elise. Carter thought Spencer, who will be a freshman when school starts, was the absolute coolest and asked about him for days afterward!
Friday morning we headed to the Magic House which is an amazing children's museum. It is about 15x bigger than the children's museum we have! Carter had a blast and spent forever in one small section designed for children ages 1-6. There was an animal hospital with stuffed dogs and cats in cages. Carter took a dog to get groomed and then carried it right back to the same cage he got it from. There was a child-sized car at an auto shop and Carter went straight to it attempting to put a wheel on it. At one point Elise woke up so Jeremy, Thomas, and I took her to a section for babies 0-24 months. There were huge mirrors which she loved. She smiled at herself and almost full out giggled. There was a section to weigh and measure her, a ball pit, and some small slides. She didn't really react to riding down the slide at all but when Jeremy would pull her back up the slide to go down again she would smile. That evening I took Elise to meet one of my closest friends from college while Carter stayed behind to swim at the hotel pool with my parents and brothers. 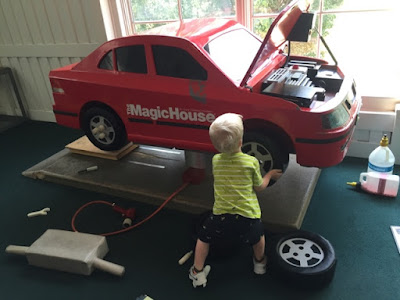 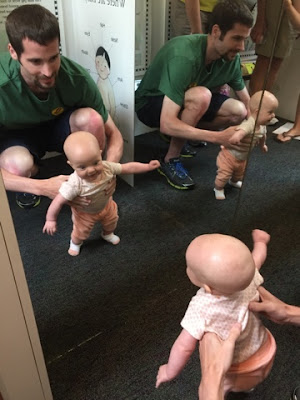 Saturday morning Carter slept in until 8:30 after a late night, we didn't get to bed until 10:30! We ate breakfast, packed up, and said good bye to my grandparents. Then we headed to Ty's cousin, Megan's house. There Elise met Megan's husband, Scott, and son, Garrett. She also met Ty's cousin, Brody. Aunt Netta was also there but she had met her before. Garrett wasn't so sure of Elise at first but warmed up to her, even giving her kisses! Megan cooked lunch for everyone which was so sweet! There were strawberries and whipped cream for dessert. Netta was sitting next to Carter and he kept stealing whipped cream off her plate even though he had some of his own. Playing around with him she would turn her head and pretend she didn't see him taking her whipped cream. Then she asked for some of his and he told her no but turned his head and pretended not to see so she could take some. It was the absolute cutest! Since Carter slept in that morning, our time at their house was cut short because I wanted to get on the road at Carter's nap time. We had a little bit of playtime after lunch and then we were back on the road. Elise and Carter both fell asleep almost immediately and even slept through me getting gas an hour down the road
On our way back to my parents' house we stopped in Branson to go to White Water and Ty met us there! I was pretty nervous about Elise being out in the heat, especially after our incident at the pool a few weeks ago. I again had the umbrella to help shade her. We also took Carter's puddle jumper. Elise had a blast laying out on the beach chair under her umbrella. She kept kicking and scooting around and would grab the umbrella handle to hold. I took her out in the water for a little bit once the sun went down. She didn't react too much with her face but she sure kicked her feet. After that Carter kept asking for sissy to come back in the water with him. He loved having her in there with him! At one point I took Carter to some slides he wanted to ride. I told him we couldn't ride together and he would have to go by himself but he still wanted to ride. We waited in line and when it was almost Carter's turn I reminded him that I couldn't go with him. He said he still wanted to go. Then it was his turn. He sat down in the slide and waited for the life guard to tell him to go. When the life guard said go Carter looked back at me, screamed for me, and held up his arms for me to grab him. Maybe next time! It was getting late and Elise was exhausted. There was just too much to watch and the music was too loud for her to sleep. I went to find Carter in the lazy river with his Opa and saw him sucking his thumb and clinging to Opa in exhaustion. I decided it was time for our car to head home. Opa took Carter to take a shower and I headed for the car with Elise. I strapped her into her car seat and pulled up to a parking spot right by the entrance. Of course as I started driving Elise immediately fell asleep. We waited for what seemed like ever on Opa to arrive with Carter. When he finally did arrive everyone else was with him. We decided Ty would ride with us instead of Opa. I put Carter in jammies really quickly and then strapped him in. But naturally Elise woke up while he was getting strapped in and cried for the first 45 minutes of our drive! The pacifier wasn't working so finally I took my seatbelt off and kneeled on the floor beside her so she could nurse. She wasn't hungry but was pacified. Since we were driving on the highway we didn't feel that was a safe option so we decided to just stop and get a hotel rather than heading on to my parents' house. Where we stopped all the hotels were booked so we got back onto the highway to head to the next town and lo and behold Elise fell asleep! It was like she just needed to know there was a way out! After that Ty and I had a wonderful time talking in the car. It was so nice to have some one-on-one time together after 4 days apart! Our trip was so busy and Elise got to meet so many special people! I'm so glad we did it even though we missed Ty so much!

Posted by Liz Runningmomma at 1:02 PM