We had another exciting holiday as it was Elise's first 4th of July. Last year Carter had a blast with the poppers, smoke bombs, and snakes we got him. I was looking forward to doing all those things with him again but the sweet boy has just become so sensitive to loud noises. He would be having fun with the fireworks that don't make noise until my parents' neighbors would shoot off something loud. And the poppers? Even those were too loud and slightly scary for him. Poor Miss Elise would start to fall asleep and then loud fireworks would go off waking her up and it was game over for her. Fireworks aside we had a wonderful day and enjoyed another holiday as a family of 4. I love having 2 babies to share experiences with and watch grow. It's so neat to see how different they are and how they are born with their own personalities. Elise is so different than Carter was at this age and I love it!

We started the morning bright and early with the Firecracker 5k, more on it to come. I woke up at 6:20 and planned to get up but next thing I knew Ty was waking me at 6:45 to get ready for the race. The man was on point all morning. He was already dressed when I got up so he dressed Carter while I got dressed. Then he dressed Elise as I brushed my teeth. I'm so used to getting them both ready on my own that it was honestly the best surprise ever to come out of the bathroom with both of them ready to go! The 5k started at 7:30 am and afterward we carried on our tradition of breakfast out at good ol' McDonald's. Mom and I walked home with Carter while everyone else drove and then I quickly showered and fed Elise so we could head out for a play date.
We went over to Erin's house to see Hayden and Addison as well as our friends, Jason and Casey, and their son, Will, who were in town from Texas. Carter was pumped to see Hayden and played some with Will who is just over a year old. We easily got a picture of all 5 kids together while Carter and Hayden ate some fruit snacks. Elise was leaning on Carter on one side and Addison was on his lap, it was precious! Then right before we left Casey suggested taking another picture but Carter was not having it. We tried bribing him to no avail and he eventually posed for some Smarties. He was just getting really tired because he'd woken up at 5 am. You'll notice his thumb in his mouth for those pictures.
We got home from our play date in time for lunch and then Carter went down for a nap. I was really worn out so Elise and I also headed to bed. She nursed and then we both went to sleep for about an hour and a half before Carter woke up. Oma and Opa had picked out a few fireworks for Carter while he was napping so we did some of them before heading out to visit more friends. One of my best friends from elementary all the way through high school, Melissa, her girlfriend, Liz, and their 6 month old twin boys, Graham and Wesley, were in town. We went to Liz's parents' house to see them and Carter was pumped to get in the pool. He played on the stairs, in some floaties, shot at a floating basketball hoop, and said he wanted to swim like a dolphin. I loved seeing Graham and Wesley together. They would reach for each other and hold onto each other which was the sweetest thing! I really enjoyed talking to Melissa and hearing her perspective on parenthood and especially the challenges of raising twins. When it was time to leave Carter didn't want to go and threw stuff in the pool so I would have to get it out, delaying our departure.
At home Ty had been smoking a pork shoulder and my mom had made sides to go along with it. We had a delicious meal and thoroughly enjoyed ourselves. After dinner we shot off some more fireworks. Carter's favorite were the snakes and smoke bombs. Everything else was too loud. He got so upset we ended up taking him inside and having him watch Ty light fireworks off through the window. Poor Elise was having a terrible time. She was overtired but every time she'd fall asleep the neighbors would shoot off something loud and wake her up. I decided to give her a bath and go lay with her on my chest to help her fall asleep. It took a while because each time I'd go to lay her down she'd hear fireworks and wake up. Eventually I decided to just lay with her on my chest until she was in a super deep sleep. While I was in with her my dad gave Carter a bath and my mom brought him up to say good night. When he was giving Elise a kiss he bumped her and then laid on her for a bit and she slept through it so I figured she was hard enough asleep I could lay her down. I put her in her Pack N Play and then put Carter in bed. He was so happy to be in bed! When I went downstairs it was a little before 10:00 which was when the city fireworks show was set to go off. My mom and dad said they'd stay home with the sleeping babies so we could go see the show. Ty drove out to a parking lot close to where the fireworks were lit and parked. I put a towel on the hood of the car and sat on it while Ty stood in front of me so I could wrap my arms around him and lean on him. It was the perfect ending to a wonderful day spent with friends and family. It doesn't get any better than cuddling my husband! As we watched the fireworks light up the sky I was reminded of July 4ths of the past sitting in lawn chairs in my grandparents' yard watching the fireworks. I miss them both so much and am so thankful for all the wonderful memories I have of them. Of all the holidays the 4th was my favorite one in terms of being with my grandparents. They sure had a way of making it special. My grandpa knew I loved the rodeo so he bought tickets every year. Beforehand we'd all sit at the end of their long driveway with us kids taking turns lighting fireworks. By the next morning my grandma already had the mess totally cleaned up. I'm so thankful that Carter and Elise have 2 sets of grandparents just as wonderful to make those memories with! 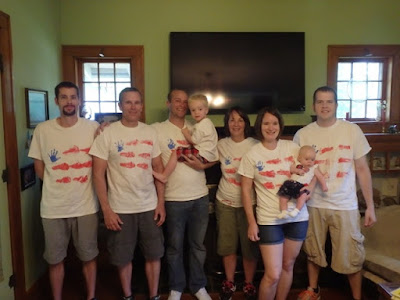