We ran the 2nd race of an evening race series on Saturday, July 11th. I know this recap is way late, but there were just other things I was more interested in posting about. That day my parents and I spent most of the afternoon out in the sun at the pool with Carter. I was worried about hydrating but was too tired to care and went down for a nap when Carter did. I originally had high hopes for the race but as the event neared my motivation for running and especially running hard diminished. I planned to take off at 7:20 pace and see what happened.

My dad and I lined up together at the race start and agreed we wanted to go out around 7:20 for the first mile and no faster than 7:15. We took off and my legs felt great. I looked down at my watch around the half-mile and saw I was running 6:50 pace but I didn't worry too much. I knew with the race being on a trail with lots of trees around my Garmin often struggles with determining pace and jumps around a lot. I also didn't want to run off of pace as much as off of feel. I felt really good so I went with it. I knew the race always thins out quite a bit after the first mile and I end up pretty much running alone so I often times struggle to keep pushing. I figured having a bit of a cushion with a faster first mile wouldn't be such a bad thing. My dad knew we were running faster than planned so he backed off the pace. As I noticed him pull behind me I knew I should probably slow down and stay with him but decided against it which probably hurt me in the long run. I went through the first mile in 7:16 which was only 4 seconds faster than planned, but 14 seconds faster than my first mile the week before.
I could feel myself slowing down and tried not to let myself slow too much. We hit the turn around and I told myself, halfway done but I just wasn't mentally in the race. I was calculating in my head how much of a cushion I had and how much I could slow down and still run a faster time than the week before. My 2nd mile was 16 seconds slower than my first at 7:30. I told myself that wasn't bad really because it was the same as my second mile the week before but I'd let myself slow down too much and it was a slippery slope from there. My legs felt terrible. I wasn't struggling aerobically at all, it was all in my legs. They just weren't ready for races so closely spaced. I knew I was slowing down more and kept telling myself I was a sitting duck for anyone behind me, especially my dad who I knew was still close behind me. Even then I couldn't muster the strength to pick up the pace. I figured if someone came up to pass me I'd try to hold them off then. As I approached the finish line I saw the minutes were still showing 22. In my mind didn't deserve to run under 23 with how weak I'd been mentally but I kicked it in as hard as I could finishing in 22:35. I was disappointed in myself and how I ran but I was pleased that I had run a minute faster than the race on this course a month earlier. 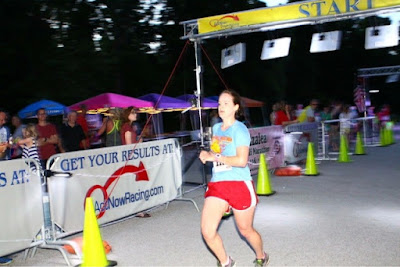 I watched my dad and Ty finish and then headed back onto the course to run a cool down to my mom who was walking with the kids in the stroller. I'm so glad I did because it turned out she was having a rough race. Elise was unhappy in the stroller and crying so she had pulled her out and was carrying her for quite a while. Then she took some of Elise's clothes off, took her cover off, and made sure her fan was positioned appropriately and it turned out Elise had just been too hot. When I approached them my mom was running to keep Elise happy. I took over with the stroller and we ran/walked some more. Luckily Elise was calm even when we walked. My dad had walked instead of run the way back to my mom and when he caught us Carter immediately asked to get out to run. My mom had told him he could get out to run but not until Opa got to them. This was my favorite part of the whole night, watching Carter run. He was so adorable! He loved the bags with glow sticks sitting on the path to light our way and we had a hard time getting him to go around them rather than stomping them as he ran by. He also loved running under the lit arches. Elise got hungry less than a quarter of a mile from the finish so I nursed her as we walked and got enough behind that I missed getting pictures of Carter at the finish which I was bummed about. Each race bib had a tag for an ice cream bar and Oma gave hers to Carter, much to his delight. He worked on his ice cream for a long time.