Carter holding Elise's hand. Every time he does it I love him more and it melts my heart. I turn into goo, feeling so lucky and grateful to be the momma of such amazing babies and being around to watch them grow up together. The other day I made the realization that if I was still working and they were both in daycare they would be in separate rooms due to their age difference and even if they were somewhere where they were together Carter would most likely be too busy playing with kids closer to his age to even notice his sister. I am so glad our situation has changed and they get to spend their days together! 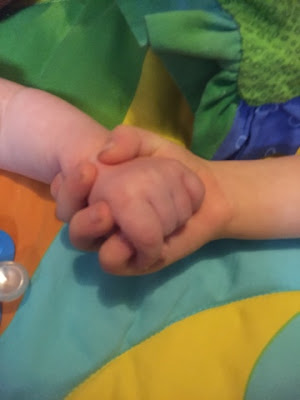 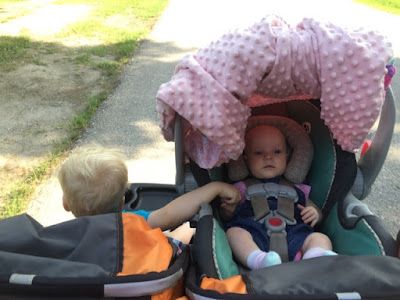 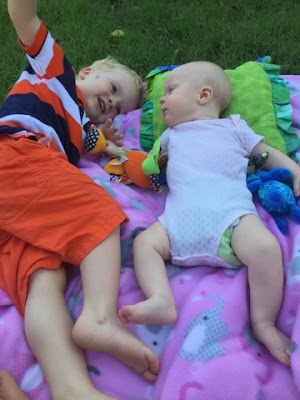 How vocal Elise is right now. She really wants to talk and communicate with us. She loves to screech and it is so funny and cute. Multiple mornings we've been woken up to her screeching at 5 am! We jokingly refer to it as her baby pterodactyl screech.

Trap Queen by Fetty Wap. I hadn't heard of Fetty Wap until we saw him perform on The Tonight Show. After that I couldn't get his song out of my head. Something about his voice, I just love it! I'm always a few steps or miles behind when it comes to music because most of the time when we're driving in the car if I have the radio on Carter declares, "Music too loud!" and asks me to turn it off. I'll admit I have no idea what a trap queen is and I have a sneaking suspicion I don't want to as many times once I understand the lyrics to a song it ruins the song for me!

Piggy backing off where I first heard that song, I love Jimmy Fallon as the host to The Tonight Show. Honestly I rarely watched it when Jay Leno hosted because I didn't think he was funny. Now we watch it on Hulu and I'm always cracking up at his jokes, the games they play with guests, and the way they involve The Roots in jokes. If you haven't seen Jamie Foxx doing musical impressions you absolutely must. He is so freakin talented!

Lip sync battles. We stumbled across clips from the show on YouTube and enjoyed them so much we watched a bunch one night. My personal favorite is Paul Rudd. I loved that his was funny simply because of his movements and facial expressions without any props. Ty really liked Terry Crews because what's not to love about a giant man shirtless waving ribbons around while dancing and lip syncing to a woman singing? If you haven't seen them, check them out below I can almost guarantee you will at least giggle!

Sleeping on my stomach. Man do I miss it during pregnancy and I'm grateful for the ability to belly sleep for so long afterward. Every time I roll over to my belly and start to drift off to sleep I smile and soak in the amazingness. After Carter was born I rolled over to my belly and started to panic before realizing I could sleep like that. It was a glorious feeling knowing I could sleep on my belly. With Elise I looked forward to sleeping on my belly for weeks. Then when the moment came the night after she was born I rolled over and holy breast feeding, my boobs were sore! It was definitely not the same experience as after Carter was born! It has been so amazing since though!

Other people having babies. Pretty much ever since Carter was born I've been in a constant state of baby fever except for when Elise was a new, new newborn. So I'm loving other people getting pregnant and having babies. I just have this need to be around tiny babies at this point in my life. Pretty sure Ty's convinced it's a sickness! One of my good college friends who lives less than 15 minutes away is 36 weeks pregnant and I can hardly wait to get my hands on her sweet girl once she arrives. I was recently going through my maternity clothes to share with a friend and felt so sentimental about it.

All that being said, I love the thought of adding another baby to our family. Obviously later on, not anytime soon. I just love thinking of having 3 little ones running around, playing and giggling. When we were in the hospital after Elise was born a small part of me felt like I could possibly be done birthing babies, I was probably 80% sure I wanted to have another. Then we left the hospital, got home, and that familiar feeling returned. The feeling that we weren't done, that I wanted to be pregnant again, that I wanted to go through labor and delivery again, that I wanted to bring another baby into the world, that I wanted to hold a newborn so fresh he/she was covered in moisture and waxy vernix, that I wanted to look down into the eyes of my newborn child and feel that special moment of love. Now it's just getting Ty on board. He definitely jumped on the 20% of doubt I had and decided he thought 2 was the right number. I joke with him that I want to get accidentally pregnant and not know it until I'm past the first trimester like my friend Roo, but I really don't because I'm so regular the only way that could happen would be if I were to get pregnant before my period returns. After Carter was born it returned when he was around 6-9 months old. I can't remember exactly, but definitely not enough time between pregnancies and babies for my liking!

And to end on a random note, baked asparagus! We put asparagus on a cookie sheet and drizzle it with olive oil and salt and I can't get enough! When it's finished before the meal I eat so much asparagus while everything else is cooking that I'm not all that hungry when it comes time to eat.
Posted by Liz Runningmomma at 3:57 PM

Email ThisBlogThis!Share to TwitterShare to FacebookShare to Pinterest
Labels: loves