After all the turkey talk on Thursday, I just had to pull out Carter's Thanksgiving outfit yesterday.  He wore his "Mommy's Little Turkey" onesie, pants with a turkey on his toosh, and a turkey stocking cap.  It was one of those mornings I couldn't stop giggling from all of the cuteness. 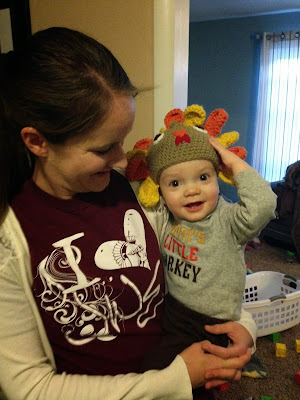 Thursday night Carter had eggs for dinner and some yogurt with cucumber and cumin mixed in.  I packed up leftovers for him to eat for snack and lunch at daycare.  I didn't think to mention to his teacher that he'd had egg multiple times before.  I never take anything to daycare that he hasn't already had at home.  I got a call as I was arriving at work to make sure Carter had eaten eggs before because she was nervous to give them to him.  I appreciated the extra caution and informed her he'd had them 3 different times, each time spread over the last couple of weeks with no reaction.

About 2 hours later I got a call from Carter's teacher again.  Carter had a rash that started in his diaper area and then spread to the rest of his trunk from there.  She didn't want to feed him the eggs because she was worried he was allergic.  I didn't think it was the eggs, so then worried it might be the cumin which was new to him the night before, so I didn't want her to feed him the yogurt.  I just imagined his throat swelling closed and started to feel panicked.

After I hung up the phone I immediately messaged Carter's doctor and remembered Carter is on Amoxicillin for his ear infection.  I'm allergic to Penecillin and so is Ty's dad, so I figured that was probably the most likely culprit.  Normally our doctor messages us back within 15-30 minutes which is great because I'm a nervous wreck while I wait on his response every. single. time.  Unfortunately yesterday must've been a busy day for his office because it took him over an hour to respond.  He agreed that it was more likely to be the Amoxicillin.  He suggested we not give it to him for 24 hours and then try it again to see if he has the same reaction.  If he has the same reaction, he will prescribe a different medication. 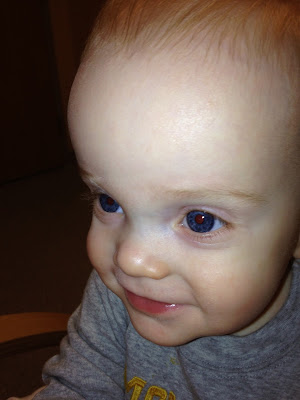 I feel so bad for Carter because he didn't have enough of the medicine to clear his ear up.  I know it must still hurt, but all we're giving him right now is Tylenol.  Well that and extra snuggles.  Yesterday when we got home he wanted to be held all evening, but not while sitting, he wanted me to stand and hold him.  So on went the baby carrier, out came the leash, and we took Harper for a walk.  Carter was entertaining us the entire way with stories.  He would lift his head, stare at the sky and talk, then he'd put his head against my chest, stare out to the side and rest.  Last night was particularly difficult as he woke up multiple times and would only sleep snuggled up to Ty or my chest.  Not sure about Ty, but Carter wasn't too keen on me sitting down, he wanted me to stand up to rock him. 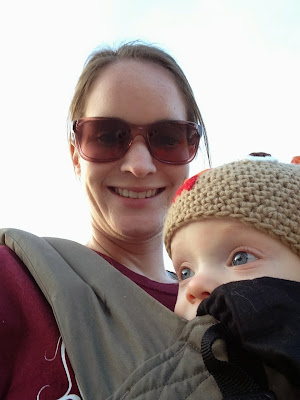 When he wakes up from his morning nap I will give him a dose of medicine to see what happens.  Cross your fingers the rash doesn't return.  Until then?  The eggs and yogurt will be sitting in the fridge.  No way am I giving them to him, just in case either of them were the cause.
Posted by Liz Runningmomma at 8:07 AM