Just to Prove You Wrong...

I guess with all that talk yesterday about Carter not wanting to grow up, he had to go and show me otherwise today.  When I got to daycare at lunchtime he was taking a nap.  Not on the infant side in his crib, but in the one year old room on a "cot" on the floor.  It was almost too much to take.  Last time I woke him up from a nap to nurse at daycare, he never went back to sleep, was miserable, and went to bed early that night.  So I let him sleep, watched him for a while, gave him a few kisses, and headed out.  I missed him so much.  Seeing him was great, but I needed to hold him, to snuggle him, to see his smile.  Being a working mom is rough and just keeps getting harder.  Everyone told me it would get easier and they continue to tell me that, but it just hasn't.  Maybe it will.  Maybe I haven't given it enough time.  Or maybe it's just me. 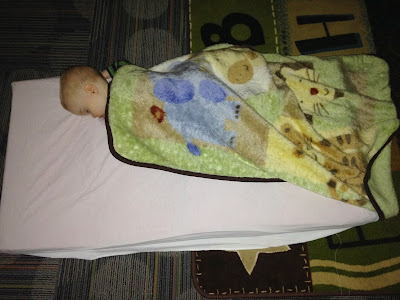 Before dinner Carter and I were playing with one of his cars.  I was pushing him around and we checked in to see where everyone was, then I stopped and talked to him as he sat on the car and played.  All of the sudden he pushed with his legs to propel the car on his own.  The only problem was that he went backward rather than forward.  He reached to me as if to say, "I want to come this way!"  But then he decided he enjoyed pushing himself around enough that it didn't matter which direction he went.  Luckily he did it again so I could get a video.

This evening Harper had pulled down and chewed a pump part.  When Ty went to get her in trouble she ran and hid behind Carter.  It was hilarious to see and made it difficult to punish her.  She's even smarter than we give her credit for!


Carter has pictures tomorrow at daycare.  I am so tickled at the thought of him posing in front of a professional camera, looking all grown up!  We picked out his special picture day outfit and even put it on this evening to make sure it fit and looked good.  I have it packed up and ready to go so his teacher can change him before pictures.  The hard part will be waiting 3 weeks to get the pictures back!

Posted by Liz Runningmomma at 7:53 PM