Ty's cousin, Megan, and her husband, Scott, are expecting their first baby in April.  They had an ultrasound which revealed their sweet baby's gender the Monday before our trip.  Knowing everyone would be getting together since Paul and Amanda were visiting, Ty's mom started dreaming up ideas for a gender reveal party.  She came up with an awesome and original idea.  Their family loves to make homemade ice cream so we would make homemade ice cream and then Megan and Scott would sneak in and dye the ice cream blue for a boy or pink for a girl.  Scott and Megan along with their parents found out baby's gender at their doctor's appointment and revealed the gender to everyone else during the party. 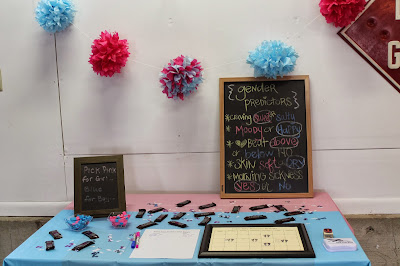 They made cute little pins for us to wear based on our guesses.  We also guessed the baby's birthday and weight.  Ty made them a calendar for everyone to stamp their birthday guesses just like the one he made Carter.  The whole thing made me so nostalgic and happy thinking back to the day we found out we were having Carter and not Emma. 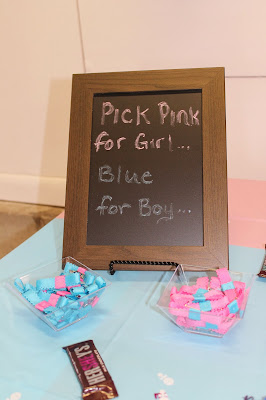 It was so much fun all gathering around to have the gender revealed.  They had a towel on top of the ice cream machine and pulled it off to reveal blue ice cream! 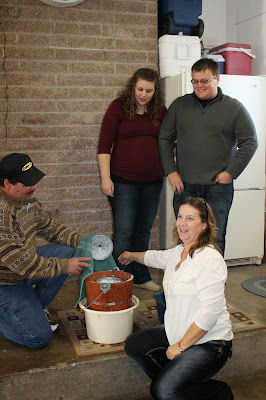 As I was enjoying my ice cream, I looked at Carter and suddenly had the urge to treat him to some ice cream.  I'm normally very careful about following the 3-4 day wait rule after introducing new foods and he had just had parsnips for the first time that morning.  I told myself parsnips are basically just carrots and I would just give him a tiny bite.  Initially he wasn't too sure as the spoon touched his lips.  I think it had to do with how cold the ice cream was.  After the next bite he kept leaning forward for another bite.  It was hard to stop giving him bites so we switched over to yogurt. 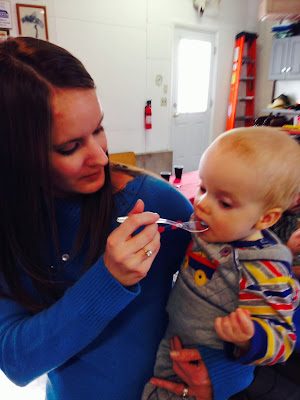 Posted by Liz Runningmomma at 7:58 PM