On Saturday we ran the Zoo Run 5k.  It was our first time running the race.  Ty read online that traffic getting into the zoo on race day is crazy.  The website suggested adding 30 minutes to your regular travel time in order to arrive on time.  Ty wanted to leave the house no later than 7:30 for the 8:30 race and we left a few minutes after 7:30.
We did fine getting to the zoo, but traffic getting into the parking lot was nuts.  After sitting in traffic for 20 minutes to get into the zoo, we found a parking lot outside the park and walked up to the start area.  At this point we had about 5 minutes until race start and still needed to pick up our timing chips.

As everyone else walked, I ran to the race start area to find the timing chips.  I grabbed mine, found everyone else, got their bib numbers, and picked up their chips.  As I was running back over to the start area (which was packed) I heard them announcing we had one minute until start time.  I still had my warmup sweats on and my timing chip in my hand.  I pulled off my sweats, shoved them under the stroller, and bent down to put my chip on my shoe as they began to count down 30 seconds from the race start.  The gun went off as I finished attaching my chip with zip ties.  I stood up and took off running.  I was far enough back I was weaving through walkers and knew it had taken me quite a while just to get to the starting line.

I spent the entire first mile of the race running on the grass to the side of the course and weaving through runners and walkers.  I was impressed that I finished the first mile in 6:50 with all the weaving I was doing.  My plan had been to run the same pace as Clash of the Clans, but to run my 2nd mile closer to 7 minutes rather than 7:05.  During the 2nd mile I was still passing LOTS of runners, but I was weaving much less.  My 2nd mile was 6:56, right where I wanted it to be!  I knew I could pick it up during the last mile and feelt good knowing I was on pace to run a new postpartum PR.

We turned into the zoo with about a half-mile or so to go.  I could see 2 young girls running ahead of me.  I caught up to them with about a quarter-mile to go and encouraged them as I passed them.  They took off sprinting as I went by and I caught up to them again.  When I looked down at my watch we were running 6:00 pace!  I was very impressed by how fast they were and took some comfort knowing that I had started the race late and wouldn't normally be running with such young girls.  I ended up finishing ahead of both the girls and found out at the awards ceremony that the one little girl was 9 years old and ran a 22:51!!!!  Crazy fast!  I finished mile 3 in 6:47 and as I crossed the finish line I saw 22:40something.  I figured I must've been a minute or so late starting the race.

As I walked back toward the race course to cheer on the rest of the family, I checked my watch.  According to my Garmin I had finished the race in 21:23, another postpartum PR!   It was fun to watch my brother, Thomas, come running up the hill to the finish pushing Carter in the stroller.  After seeing everyone finish I took off for my cool down.  It was so much fun running my cool down inside the zoo.  I saw lions, tigers, hyenas, and a black bear as I ran.

We stayed for the awards ceremony.  I knew they would go off of gun time rather than chip times for awards, but thought there was a chance some of us had still medaled.  I didn't realize my parents didn't know awards are based on gun time.  My dad was pretty disappointed.  I ended up 2nd in my age group and 4th overall female with a gun time of 22:50.  If I had started the race on time I would have won my age group and been 2nd overall female (3 seconds behind the winner, possibly giving her a run for her money).  My mom was the only other person in our group to medal with 3rd place in her age group.  She would have been 2nd place with her chip time.  My dad was 4th in his age group, but would have been 2nd had he started the race on time. 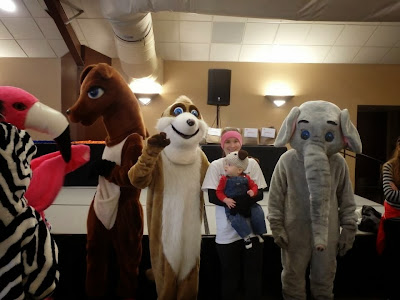 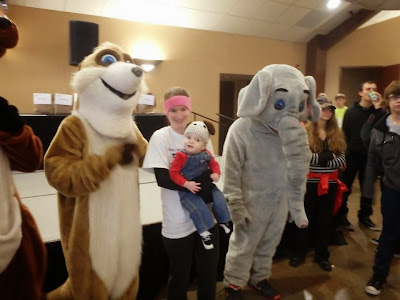 Now we know for next year, leave earlier for this race!  We definitely enjoyed the race and plan to run it again!

Linking up with Ashley for Move it Monday! Posted by Liz Runningmomma at 7:25 PM