Carter started saying he wanted his Gma and Gpa to come visit him right around the time they called to figure out a weekend they could come visit. It's like they have grandparent sensors and know when their grandbabies are missing them! They came to visit the weekend of Father's Day and Carter was so excited. On Friday he didn't want to leave the house because he was afraid his Gma and Gpa would arrive while we were gone. I spent most of the morning explaining over and over again when they would arrive and that we wouldn't miss their arrival. Eventually he was willing to walk to the library and while there we picked up the book How to Babysit a Grandpa. I told Carter it would be a perfect book to read with his Gpa and then his Opa later when they came. He was so excited to see his Gma and Gpa and very happily helped them carry everything inside the house. After special gifts and treats from his grandparents it was time to read books before bed. Without missing a beat Carter ran in and grabbed that book asking his Gpa to read it to him. It was so cute that he had remembered! 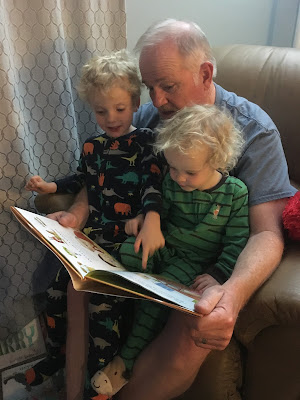 Saturday morning Elise woke up first and came into our bedroom. I hopped out of bed to get ready to run and Ty told Elise to go get her Gma. Elise must've been a little unsure because she walked into the kitchen and just stood by the futon without saying anything. Rocky said he heard her breathing and that's how he knew she was there. I headed out for my run while they started making breakfast pockets. Rocky kept calling them hot pockets and asking the kids to say it. Elise kept telling him no but then once he stopped she walked off while singing out "hot pocket!" They were super excited to give me one when I got home. Ty and Rocky had decided they wanted to smoke some pork for their Father's Day meal which we did on Saturday evening so they spent the morning working on that. We had a lazy morning at home playing before lunch and naps. When the kids woke up Leina and I took them on a walk so Carter could show his Gma how fast he is at riding a bike and Elise pedaled her bike for the first time! Dinner was delicious and we enjoyed more time at home that evening. A fun game the kids played with Leina at some point during the day was pretending that they were asleep on the futon. Elise was just hilarious pretending to snore and then Carter started pretending to sleep walk which he found enormously funny. 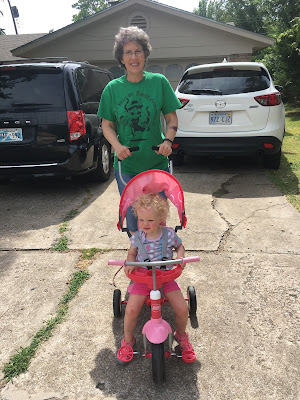 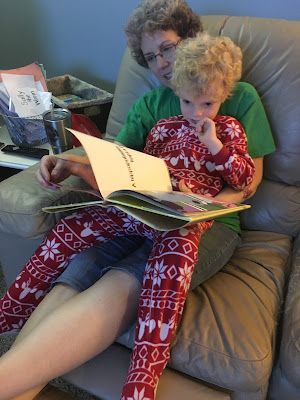 Sunday morning Elise was so excited to tell everyone Happy Father's Day! She did a great job and I took videos of her to send out. When she got to Gpa she was a little bit confused and told him "Happy Birthday," instead. It was storming that morning so I waited until the lightning cleared to head out for my run. While I was gone everyone else showered and got ready. Then we went to Krispy Kreme for Father's Day, even though I think Leina and I ate more doughnuts then the dads! Leina was cutting different doughnuts in half to sample so Carter wanted to do it and really enjoyed cutting up the doughnuts. Elise picked out a strawberry iced doughnut with sprinkles but then decided mine looked better so I cut mine in half and shared. She had cream filling all over her face! Of course we went when they were making glazed doughnuts so we also got a free sample doughnut when we walked in. I ate so many doughnuts I ended up skipping lunch. When we got back Carter and Elise passed out the cards they had made for Ty and Rocky. Elise cracked me up when she was working on the cards. She spent about 30 minutes putting stickers all over Ty's card. Then she colored with yellow a little on Rocky's before adding a few stickers. When we got to Opa's card she decided she was done and we had to work on it later. Carter spent over an hour working on the cards. He very carefully copied letters to write some version of "Happy Father's Day" on each card. On one it was actually the whole phrase while on another it was "Father Happy." He also told me what he'd like me to write on the inside and had some really sweet things to say. Carter also wrapped some things from his room in cloth napkins to give them as gifts. He was hilarious when Rocky opened a present to find he had 3 pieces of special tiger paper. Carter said it was an accident and ran over leaving him with just one piece, saying the other pieces were for daddy and Opa. 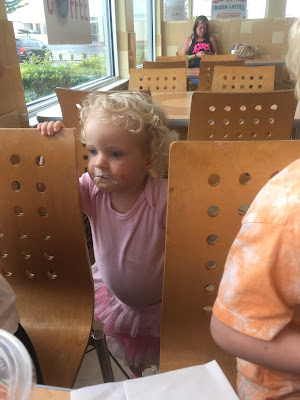 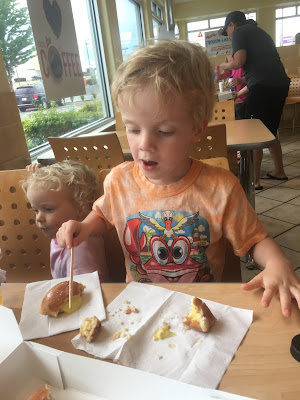 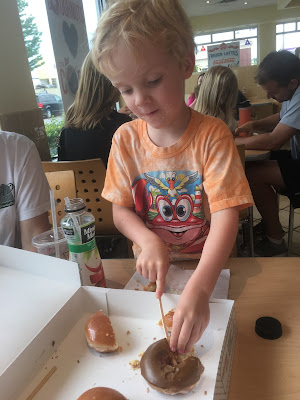 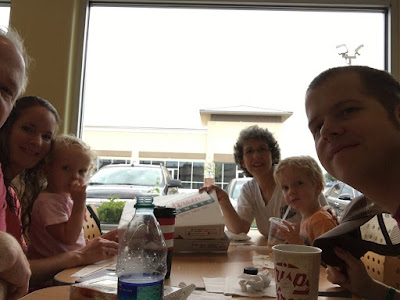 After presents and cards Carter painted my fingernails and Elise painted my toenails. Gma and Gpa left at naptime and then Oma and Opa arrived while the kids were sleeping so Carter woke up to find his other set of grandparents at his house. Talk about an awesome weekend for him! While the kids were napping I was sitting on the couch reading after doing some chores and fell asleep I woke to my phone vibrating next to me. It was mom saying she'd arrived. I had only slept for about 15 minutes and felt weird when I got up. They had also arrived with a car full of goodies and I helped them unload while the kids were still sleeping. 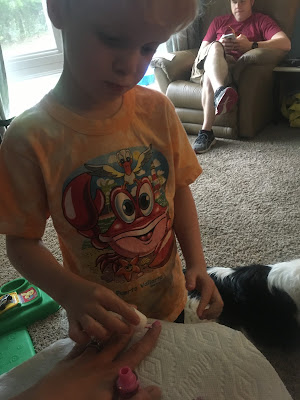 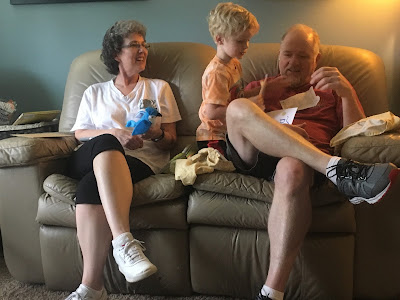 To celebrate my dad and Ty we went out for dinner and then did another round of cards and presents. It was pretty funny that Ty and dad were wearing the same shirt. When Ty got dressed that morning he made the comment that he'd probably end up matching my dad and he was right! Fittingly for Father's Day, both Carter and Elise wanted to sit with my dad so he had his lap full at dinner. Normally Elise wants no one but Oma so that was a special Father's Day treat! They later treated us to ice cream before heading back home. It was a very fun and loved filled Father's Day weekend for us! Read about our Father's Day last year here, 2015 here, 2014 here, and 2013 here. 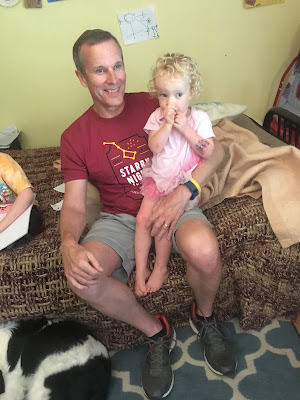 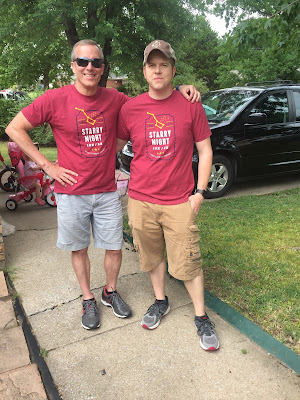 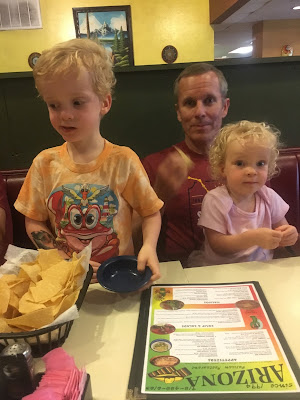 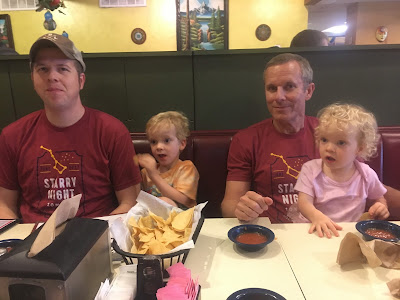 Posted by Liz Runningmomma at 11:55 AM