One day while Carter was having quiet time in his room he yelled out to me asking what day it was. I told him what day of the week it was and he yelled out, "No, what day!" I then told him the actual date and he screamed back, "NO, what character day is it?!" Elise was asleep and I didn't want her to get woken up so I told him I didn't know what he was talking about and I'd be in when I was done with my chores. When I opened his door later to walk in his room I found him sitting at his desk adding stickers to his Highlights calendar and I finally knew what he meant. I just couldn't stop giggling over how he was adding a sticker to every single day as if each day was a special event. It was even funnier when he started pointing out different stickers and explaining to me what day each sticker represented. 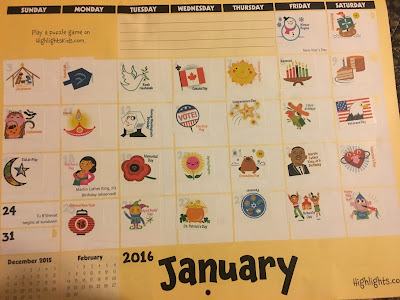 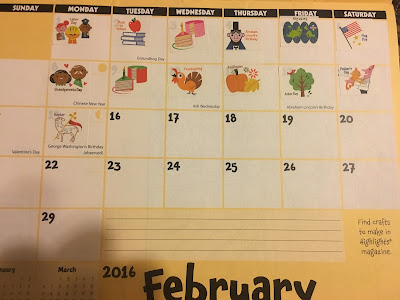 The funny one here was that he decided the picture of the dad with a baby for Father's Day represented Baby Day. He said the picture for Grandparents' Day represented Grandparents Love Day which I thought was really sweet. Every morning for about a week Carter would get out his calendar, look at it, and declare the day Pirate Day! Then he decided he needed to know what day it was first thing in the morning and asked that I sleep with his calendar on my chest so he could come in and check his calendar when he woke up. I didn't sleep with the calendar on my chest, but I do love my creative and silly boy so much!
Posted by Liz Runningmomma at 1:17 PM