Most of these pictures were taken last month for Elise's update but Carter was hamming it up so much I just had to use them for his update. I was trying to get Elise to take pictures so he ran in and said he would pose for me. If I tried to get him to take pictures for me now for this update, he probably wouldn't want to. Isn't that always how it works with kids?! It's crazy to me that Carter is now 4.5 years old. I can't believe he will be 5 years old so soon. For some reason 5 feels old. I guess because that's the age when most kids go into kindergarten and when Carter will go into kindergarten, when he's 5! He is definitely looking more and more grown up and like a big boy. He's now long and lanky, no baby fat on him. He's all long, skinny legs! He looks like he's going to be built like his Opa if he continues this way. Those long legs make for a fast runner. He finished his first mile fun run this month in 11:12 which I was impressed by and he sure loves to run. When we are at the park I always find him on the outskirts of the park, running laps at some point. He's a natural! 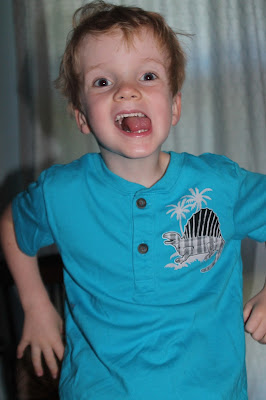 Carter likes to play baby where he pretends to be a baby and I talk to him really sweet and softly. He also likes me to carry him around and put him in Elise's bed when he's a baby. He uses noises and pointing instead of words to communicate when we play this game. He also likes to play what he calls little kid where he's either the dad or the teacher and I'm the little kid. I never have a name, I'm just little kid. Then Elise is my mommy and Ty is my brother. It is so cute when he plays as the teacher because he basically leads me through a school day like what he'd have at school, even saying things I know his teachers say and singing songs his music teacher sings. I'd say his favorite game is probably playing party. He loves to set up parties and wrap presents by putting items in our fabric napkins and wrapping them up. When he sets up a party he puts out food and drinks and makes cards and even puts them in envelopes. Sometimes he wants to do themed parties and other times he dresses up in nice clothes for parties. Yesterday he wanted to surprise Ty with a party when he got home so he dressed up in nice pants and a button up shirt. When I put Elise down for a nap he often times draws me a picture or writes me a letter and surprises me by sliding it under her door or laying it outside her door. He also likes to build with blocks, especially the magnetic blocks my Aunt Judy and Uncle Mike got for him or the other kind of magnetic blocks from Ty's Aunt Tina. When we go to the library he always wants to build with blocks. 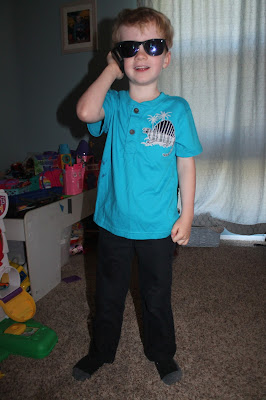 Carter is very independent and can do so many things by himself. He especially likes to help his sister and is always doing sweet stuff for her. He has gotten really good at pouring milk, only spilling on occasion, and always pours some for Elise if he pours some for himself. He really loves Elise and will randomly stop what he's doing to kiss her on the head. Often times he runs over to her, grabs her up in a hug, and kisses her on her head. He loves leading their play and telling her what to do. I've noticed lately he's let her be in charge a few times and is following her lead which is new. One day Elise was crying on our walk because she wanted to hold Harper's leash and I told her no. Carter ran back to her and kissed her on the head while hugging her. He also likes to explain to Elise why she can't do things or why we do certain things. I always chuckle hearing what I've said re-told in his words. Just this morning he was telling Elise not to play in the car because it's hot in there and she could die! He also loves to scare Elise. He thinks it's so funny to hide and jump out to scare her because she will drop what she's holding and take off running. He's even talked other kids on the playground into scaring her with him. I would tell him not to do it but Elise always ends up laughing and doesn't really get that scared. 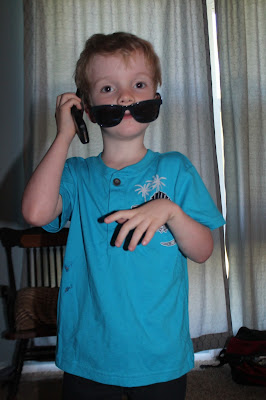 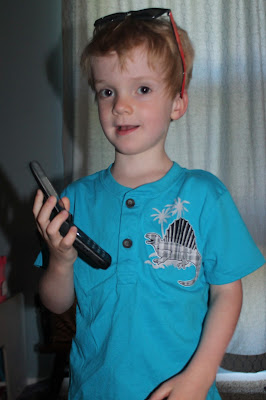 Carter says his favorite book is The Very Hungry Caterpillar. He reads it pretty much every time he lays down in his bed and can retell it pretty much word for word as he turns the pages. He does such a great job at night of laying quietly in bed reading books until he falls asleep. There have been some nights where I walk by an hour after he's gone to bed and see him reading in his room. We had no idea he was still awake, he's that quiet! Harper still sleeps with him. His favorite buddies are Big Al, Rexasaurus, Buddy, and Elmo but the only one he really has to have is Big Al. He sleeps under his doggy blanket, his snowman (Olaf) blanket, and a quilt his Gigi made for him. He also likes to have a sippy cup of water by his bed so he can get a drink in the middle of the night. He hasn't been wearing pull ups for naps for a long time but still wears them at bedtime. When we run out of this box we are going to try out no pull ups at bedtime and see how it goes. Every once in a while Carter will cry in his sleep. I'll go in and he is usually pointing at nothing and crying about something weird like ice cream or bananas. If I ask him questions he answers with stuff that doesn't make sense. I usually hold him for a few minutes and then lay him back down when he stops crying. He doesn't remember it in the morning so I'm pretty sure he's doing it in his sleep. I've tried tracking everything that happened the day before an incident and so far have found nothing that seems like a trigger. 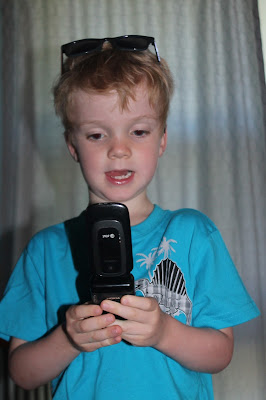 PJ Masks was his favorite show for the longest time until he had seen every episode over and over again. We don't have cable so we'd pull up what we could find on Youtube. Then Garfield was his favorite but he still liked to play PJ Masks. He tells me he dreams that Catboy, Gekko, and Owlette are his siblings. Some of his favorite movies are The Incredibles, Madagascar, and Trolls. He went to his first movie and was so funny asking me if it was going to be real people like at Seussical and The Wizard of Oz. Both were high school plays we went to see because kids I used to babysit were in them. The first time he heard Despartido he asked me to turn it up and then proclaimed it was his favorite song. It can be playing really quietly in the background and he'll recognize it and ask us to turn it up. One day I was sitting in the back of the van with him and he asked for it to be turned up. I was shocked because I hadn't even heard it! He also says Uptown Funk is his favorite song. 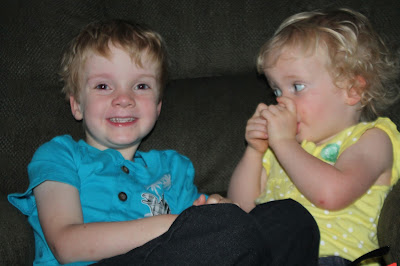 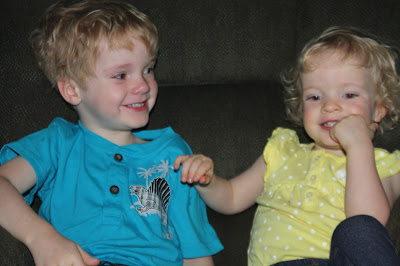 Our little party planner is already planning out his 5th birthday party. He's constantly telling me things he wants to do for his party and remembers previous details. I have a feeling his party is going to be a wild and wonderful hodge podge of all the things he loves. So far he wants a Mater, Lightning McQueen, and PJ Masks birthday party with a banana pinata and a Cars/PJ Masks cake. He also wants Paw Patrol shoes for his birthday. 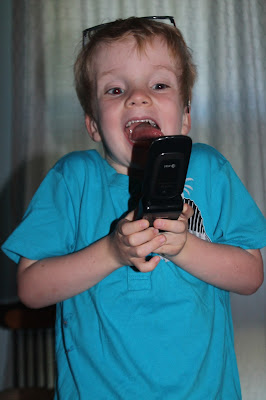 Now for some random facts. He has started talking about the "little fellows" again which are what he calls the bag worms we get in our tree in the front yard. He'll randomly mention them like, "I wonder when the little fellows are coming back," or "It is cold outside, I wonder if the little fellows are dead," or "I hope the little fellows are doing okay." I think it's so funny. I have no idea why he loves them so much or why he thinks about them when we haven't had them in months. He defines the months by the holiday in them. March was St. Patty's and April was Easter. Now what to do with the months with no holidays? Lately it has just been "summer". Sometimes he gets really frustrated when I'm not sure what he's talking about. He'll yell at me, telling me I know what he's talking about when I say I don't understand. It can be frustrating but I guess that's what you get when your 4 year old drops his nap but isn't quite ready to do so, he gets pretty grumpy in the afternoon! 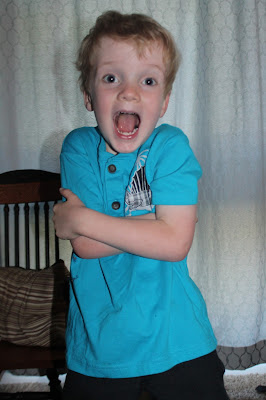 Carter is still constantly curious. He asks me questions all the time and asks to learn about things he's interested in. It's so cute when I see something spark his interest and then he asks me if we can do a learning theme on a certain topic. He is such a sponge, soaking up new information and pulling it out randomly weeks and months later. Lately he has been talking about volcanoes, caves, and ground water. I love seeing his learning take shape and really have meaning. I love his inquisitive nature! I could see it in his eyes at a few months old the first time he looked at a tank full of fish at the aquarium and I get so much joy seeing it grow and blossom as he grows and learns about the world around him. 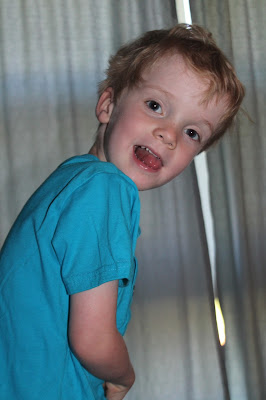 So far 4 has been an amazing year! The hardest year with Carter so far was 3. His hitting was difficult to deal with and I felt like I was failing as a parent fairly frequently. Now it is rare for us to have an incident when we are out and about and is more likely that he will use his words, if a little too loudly, to tell someone he doesn't like something. I had a first today when a mom took the time to come over and tell me how sweet my son was and how nice he was being with her little one. It used to always be that someone was coming to tell me he had done something unpleasant to their child that I had missed while attempting to keep Elise from shoving random stuff into her mouth! I am so glad we've turned the corner and I can enjoy taking him out in public without worrying about what might happen. It sure is wonderful when kids begin to regulate their behavior without constant intervention, that is for sure!
Posted by Liz Runningmomma at 2:19 PM